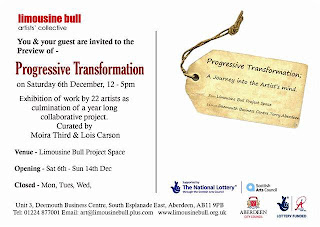 Back in May I left a clue on this blog (CLICK HERE). It mentioned the fact that a mystery object had arrived at my house. I can now reveal that the Mystery Object was part of the Progressive Transformation project, curated by Moira Third and Lois Carson. The basic premise of the project is like Chinese Whispers for artists. One artist makes an art object and then anonymously sends their artwork on to the next person; who makes a transcription of the original object, before sending their new piece on to the next person. Altogether there were 22 artists in the chain, and therefore one original object, and 19 transcriptions. 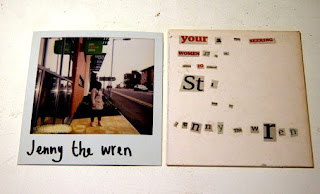 I received a heavily coded video, which showed a typewriter and a story being typed out. The clues lead me to develop the character 'Jenny the Wren' who was looking for a man - other clues lead Jenny to the Job centre... 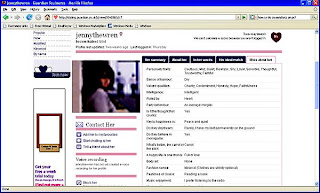 I posted her details on a dating website, for the next person to discover.
The artworks and documentation of the process go on display in the Progressive Transformations exhibition, which opens on Saturday, 6th December at the Limousine Bull Project Space, Aberdeen.
Posted by Anna Francis at 7:14 PM No comments:

The Winner Takes It All Weekend in Liverpool 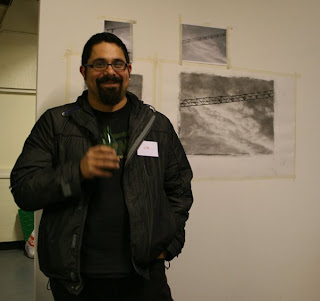 Jim Buso in his studio space.
Thanks so much to Jim Buso (organiser/above in his studio space at The Royal Standard) and all the Liverpool artists, who made 'The Winner Takes It All' a really special and amazing weekend. ..I will put up some more of my photos as I sort them, but here are a few for now...

The resource is assembled.
On arrival in Liverpool I made my way over to the 'Formule 1' hotel (an education in itself), across the road from the Albert Docks. It was quite a shock to go to this side of the city, and note the phenomenal developments that have been going on over the last 5 years. The strange dislocation which used to punctuate a trip to the Docks is gone now, and enormous shopping malls and tall buildings have landed, filling the gaps. Some of the Liverpool artists arrived to meet us, and take us over to the new Royal Standard building. On arrival we were able to look at the current show: NAVIGATOR, and then gather in the project space in order to assemble the resource. Each invited artist/delegate was invited to bring a cultural or artistic object to represent their city, and people also brought wads of information about the art spaces which they were affiliated to in their prospective cities. These contributions look set to form the foundations of a permanent resource for the Liverpool artists; based at the Royal Standard. The information which people brought from their various Cities and spaces represent a unique map of artist led activity in the UK, and could be the start of something really useful and interesting.

Royal Standard studio space.
The Royal Standard has not been open for long, but is already establishing itself as an important stop on any cultural visit to Liverpool. The building is home to 25 studio artists as well as the project space, and galleries. I was very impressed with the ethos adopted by the Royal Standard, which is described as follows on their website:
'As a studio co-operative, we strive to create a home for a group of artists challenging their practices, their peers and their environment on all levels. We also act as a social hub, providing ample space and facilities to act as a day-to-day launch pad for a wider membership of artists and practitioners and a location for a varied programme of live events and social activity, and meeting space for creative organisations.' This is supported by their commitment to changing their 'Directors' every few years - a notion which ensures that the space does not end up being run like a fascist regime, means that noone becomes overburdened or fatigued, and provides opportunities for a number of people to gain the undoubtedly invaluable experience of running the space, and fixing the program.

The outside of the Royal Standard: with Oliver Walker's 'Mr Democracy' container.
The Royal Standard building was fantastic; and the work being shown there over the weekend that we were there was really exciting, fresh and energetic. Highlights included a one night exhibition 'From Dusk Til Dawn' which was provided by some of the delegates; over from Lithuania, and took place in the dark. I really look forward to following what goes on there and will definitely be visiting again in future. We were then taken over to Red Wire Studio (weekends co-hosts) to see 'Fear Yourself' the Daniel Johnston exhibition. 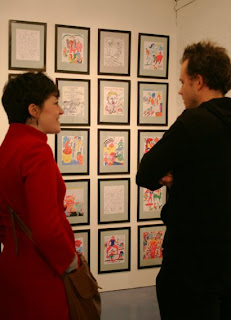 Artists looking at 'Fear Yourself.'
Red Wire Studio opened in 2005, by 4 JMU graduates, who found the building and then got a number of others in on the act. They have the full gallery space (seen above) and then around 14 studio artists, squeezed into the other half of the space. This added to the more home made/communal feel at Red Wire, which is by no means a bad thing. The group described 'Fear Yourself' as being a real coup for them, and has had the effect of changing their perception of what they can do. So: Watch this Space...
After this show we went to another show downstairs in the Carlisle Building, and then to the pub for some much needed grub.

The Royal Art Lodge Exhibit at the Bluecoat.
The next morning we were up early to meet at The Bluecoat to see some of the Biennial's 'Made Up' offerings. These included an amazing, linear painted piece by the Art Lodge (Marcel Dzama et al) Sarah Sze's piece, which though listed as being within the public realm, is actually in the Bluecoat's stairwell. 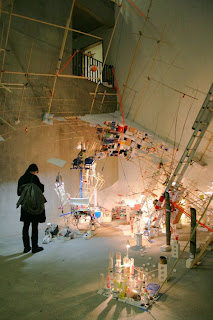 Sarah Sze's installation.
We were then shown around the Bluecoat studios and resource spaces (for example there is a fully functioning print room which artists can book out at the Bluecoat.) As we walked around the building we commented on the difference in studio provision at the Bluecoat, in comparison to most other spaces we may have experience of. Not since the comfortable, cotton wool days of being students have we experienced such luxury. 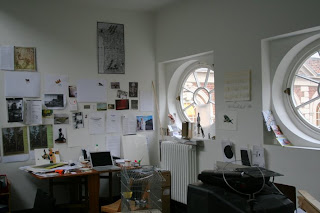 Studios at the Bluecoat
There were some questions raised of the provision; is it too clean, clinical and indeed too comfortable? Perhaps because we are so used to existing in cold, dark spaces we now can't imagine enjoying being warm, dry and fully equipped, but at the Bluecoat they are sure that not only do we deserve it, but it should be fairly affordable too. The studio costs £8 per square foot all in.

Richard Woods
Next we moved on to what used to be a paint and DIY shop called Rapide, where Richard Woods ambitious installation was sited, as well as Jesper Just's compelling 'Romantic Delusions' video.
By this point the Winner delegates had been split into two groups: one group (named the Urban Tour) would be going on a tour of Liverpool's centre to look at the various sites affected by capital of culture and the Liverpool Biennial, while my group were going on the Suburban tour; going to the outskirts to see what impact, if any, the Biennial and capital of culture is making on the suburbs. We took the train to Edgehill train station, which the Liverpool artists told us is [probably] the oldest passenger station in the world. 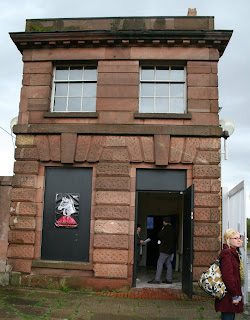 Artist led group Metal have taken over one of the station buildings, turning it into a gallery space.

The exhibition which was on was called 'Horse Power' and was based on various artist's responses to this terms, all stemming from Nietszche's madness after seeing a horse being whipped in the street. The red walls seems to be a recurring theme; David Blandy's 'Mingering Mike' installation at the Bluecoat also had red walls.
Posted by Anna Francis at 3:06 PM No comments: