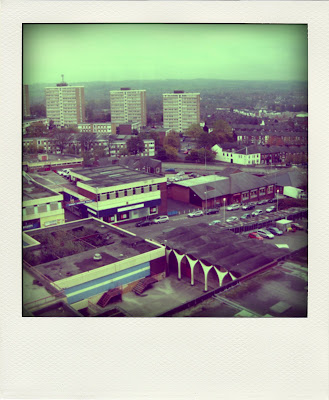 Posted by Anna Francis at 2:08 PM No comments: 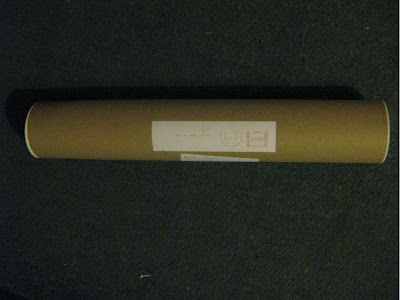 This tube arrived in the post...I thought what's this then? Can't recall ordering anything that would come in a tube...
How exciting, it was my copy of 'The Wild Pansy Press Book of Rainy Day Activities' and of course as something to occupy your time on a rainy day it is in an unmade state - and includes instructions on how to make the book up. 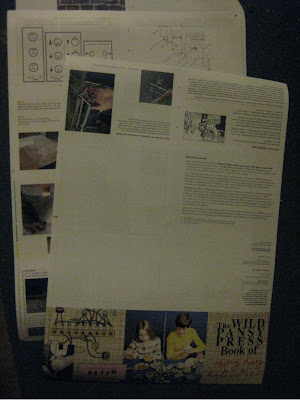 The book was a project initiated by Simon Lewandowski for the Crunchtime 2010 exhibition, which took place in York last month. Find out more on the Wild Pansy Press site. 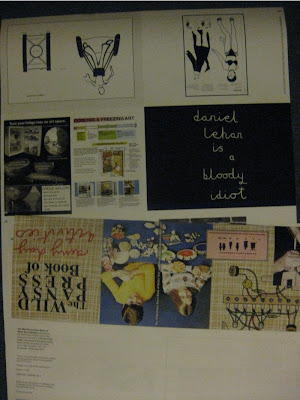 My DIY Fridge gallery manual pages were included - originally commissioned for Pest's Home publication. I know what I'll be doing on the next available rainy day...
Posted by Anna Francis at 6:42 PM No comments: 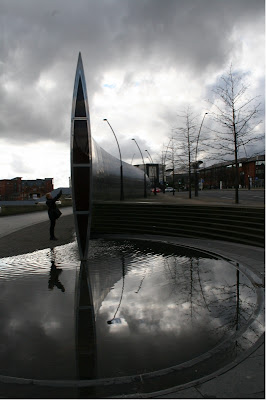 Today I went on the Urban Vision Learning Journey Trip to Sheffield. This is part of a series of trips which take artists and cultural development workers to cities around the UK, in order to look at and discuss various good practice strategies employed in other cities, involving culture lead urban regeneration. 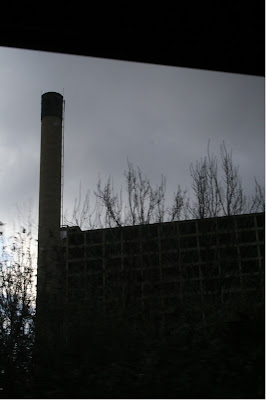 Today's trip had the title 'Public Art Strategy and Procurement.'
I am not entirely sure what this word procurement means - I understood it to mean gaining something, but in this context it means something else Wikipedia says: 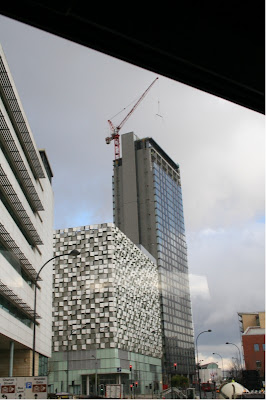 "Organisations practicing sustainable procurement meet their needs for goods, services, utilities and works not on a private cost-benefit basis, but with a view to maximising net benefits for themselves and the wider world.

In doing so they must incorporate extrinsic cost considerations into decisions alongside the conventional procurement criteria of price and quality. These considerations are typically divided thus: environmental, economic and social (also known as the "triple baseline")." 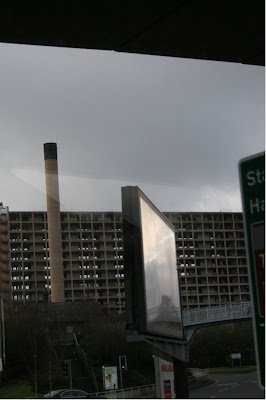 The coach dropped us off at Sheffield Hallam University, on the way in to town I noted quite a few large concrete buildings at various stages of construction, something called the Butcher's Works (which we found out later is now artist's studios) and some other tall grid like buildings. 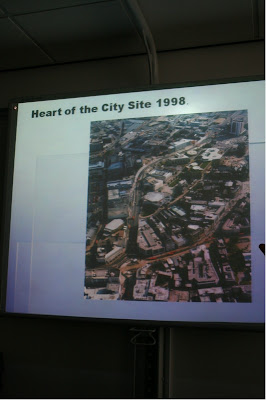 We were lead into the University, and into a seminar room for a much needed coffee, and a talk delivered by Simon Ogden, Head of City Development for Sheffield City Council. Simon provided us with Sheffield's interesting urban context, going all the way back to the Norman times, and covering the way that the city has developed. 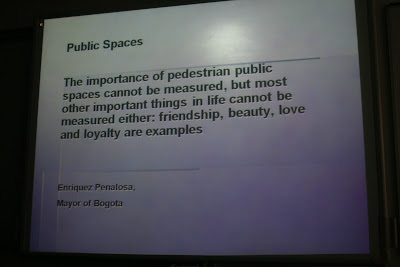 In particular Simon's talk covered the public realm development strategy which the council has been working on since 1996. He set out that to some extent as a town planner he could be the 'client' for much of the work, but also as an urban designer he was part of the design team (in fact the manager of the design team.)
The design team worked with a succession of regeneration companies, including Sheffield One and later Creative Sheffield.
He started by talking about some of the mistakes in urban planning which the team inherited, like the hole in the road phenomenon (which was a result of the false urban planners idea that cars and people should be separated.)
Simon set out that their strategy mainly involved seven different zones or approaches, all responding to different needs identified within the city. These included the 'Heart of the City' plan - which responded to the lack of a celebratory space in the city centre (much like Stoke-on-Trent). Previously what could have been the heart of the city was the Peace Gardens developed in 1996 - there had been a churchyard there before, and a concession for removing the churchyard resulted in the church wall being left in place. This made the Peace Gardens an enclosed no go zone from early evening onwards, as gangs of drinkers menaced the public, and attacks were recorded. This whole area was regenerated through EU and Millennium Funding, after the large and ugly council building (described as an egg box) was knocked down. This was seen as a great opportunity to create the celebratory outdoor space which Sheffield deserved, but demonstrating some great thinking the council also wanted to provide a Winter Garden space, so that the public could still congregate during the colder months. We later learned that the Winter Garden building (which had for me the feel of a European Botanical Greenhouse) is regulated at 7 degrees, mainly by the glass and sunlight, keeping heating bills to a minimum, whilst still providing a pleasant atmosphere. And then in summer months the vents are opened for cool air. 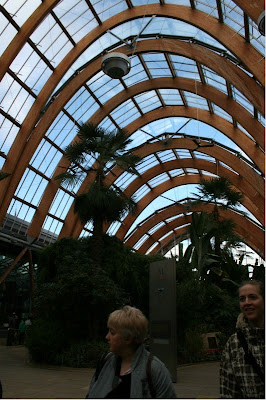 One of the things which impressed me in what Simon had to say was in regards to the attention that was paid to how people actually use and move through the city centre. Rather than design which is based on how the developers would like people to use the space, the approach was to look at the reality - which seems like Gehl's approach drawn out in his book Public Spaces, Public Life. Through this notion of observation 'The Gold Route' was developed, and the second part of our day involved a tour being given by Richard Watts, Landscape Architect and another part of the council's design team - to walk us through the developments. The 'gold route' was a working name which the development team used for the walk which went from the University of Sheffield, through the city centre and across to Sheffield Hallam University, and was in Simon Ogden's words about 'noticing where people want to and do walk and making that walk as pleasant as possible in order to encourage development' (of which i think he was referring to economic investment). This strategy has meant various public art pieces and other design features have been created in response to Sheffield's City Centre. 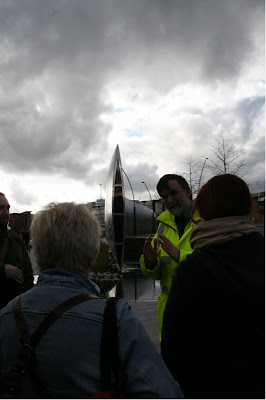 We met Richard outside the train station, by 'The Cutting Edge' a piece of public realm design, which has a purpose, but also a strong concept. 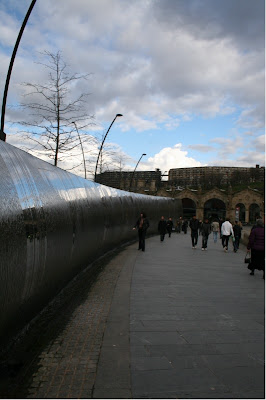 The design had to act as a barrier between the ring road, which severs the station from the city centre, and the station square development. There was also a concept of using steel, granite and water (all materials which Sheffield's industry had been built upon) within the entire public realm strategy. Richard mentioned that though they were concerned with respecting heritage they 'did not want knives and forks - the cutting edge is contemporary, not harping back to a bygone age.' I thought this was a brilliant approach, and certainly something that Stoke-on-Trent could bear in mind. The design, manufacture and build of the piece was complicated and involved many different elements; stone had to be perfectly cut, so water could run though and across it, as did the metal, which also had to be built and constructed in pieces, just in case a lorry might drive into it. The pumps have to be fine tuned, as does the night lighting design, and the mist (which reflects the Pennine's weather patterns). Phew! 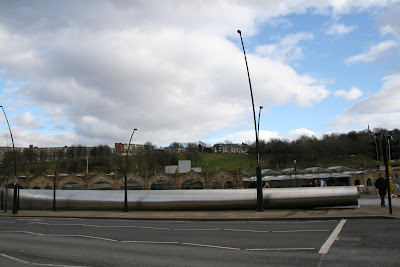 Before the Cutting edge was built the design team showed it in London, where it was panned. I must admit that seeing it in photographs, and hearing Simon's description of it as a barrier to keep the road out, I was unsure, but in fact I think the Cutting Edge really works. It is usually the case that features which cut off one space from another are a bad idea, but this seems to be an exception; where it is not possible to remove or reroute the road, I can see the benefit of a structure like this. The design team stuck to their guns, despite the bad press - and went ahead with their vision, beliving it to be right. I would be interested to see how this space works in the summer, as for me, today it was a bit cold, with all that steel and stone and water... 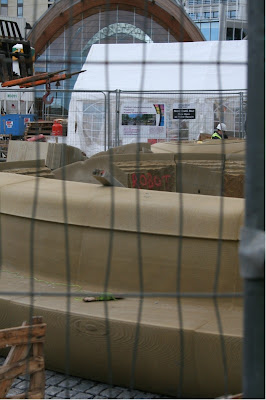 There were quite a few more interesting ideas and features shown to us through the centre, but I will not go into them all here...these included robot stone carving, rectifying 1980's design disasters and the excitement felt by the Landscape designer when working in partnership with artists on designing the public realm scheme for the Peace Garden. 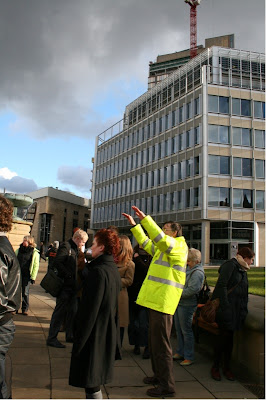 On the way home there was a heated and energetic conversation about what this means for Stoke-on-Trent. Overall we felt that these journeys are beneficial in widening horizons, and in showing alternative working methodologies, but that we should guard against any attempts at 'grafting on' what works in one place onto another. What we have seen so far in the successes witnessed is that they often come from meaningful collaborative relationships between creatives and planners, and that they nearly always respond to the specific context of the place for which they are designed, and this is why it would be inappropriate to transfer a solution for one place onto another. 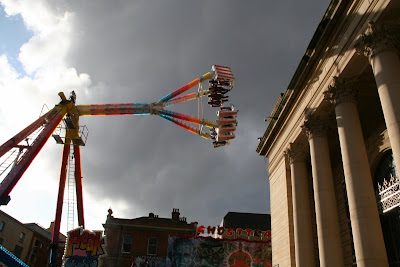 We also identified that the Learning Journey Programme is missing its final link; Learning Journey Stoke-on-Trent: Applying the Learning. As artists we hope to see this final journey take place where we could put together a programme which talks about and maps the cultural offering here, and explores what we need to see happening next in terms of the integration of culture and arts into the strategies already underway.
Posted by Anna Francis at 8:21 PM 3 comments:


Last Thursday, 11th February we popped over to the New Art Gallery Walsall to help them to celebrate their 10th birthday party. 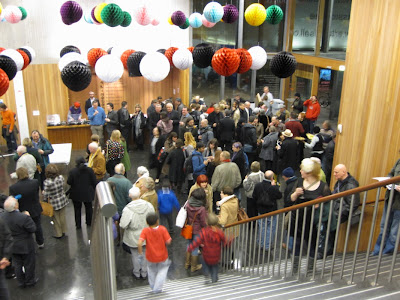 On entering the gallery we were greeted by the jolly site of lots of paper balls floating in the space. It was lovely to be back, and see Iannouis and Helen and Hannah and all the other staff. Iannouis said thanks for the card - and pointed up the stairs and said 'we put it on show.' So I went up to have a look, and was really pleased. 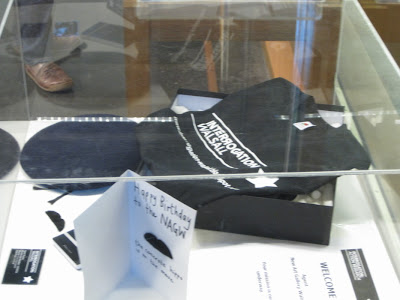 I had got a message asking me to send a birthday card, and I did along with a gift - an Interrogation pack for the gallery archive. 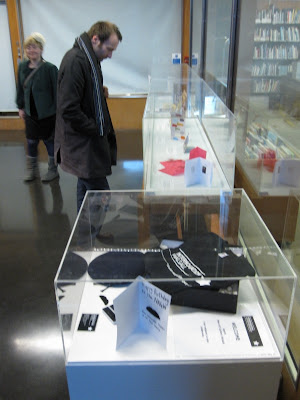 All of the artists who have worked with the gallery over the last 10 years were asked to send in cards, and all of these were on display in the We are Ten! show. 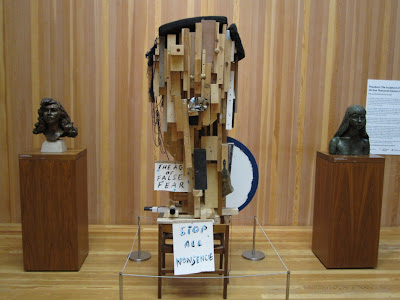 It was also great to have another look around the Garman Ryan Collection, and it was exciting as the collection had been revived and refreshed with things moved around, and new things added. I particularly liked Bob and Roberta Smith's head in between two Epstein's. I realised that part of the reason I love the Garman Ryan so much is how accessible it is in terms of it's subject matter, and this must be because it was someone's personal collection - the intimacy and love seems to show. The other reason is I think because of the brave approach taken by the curators. Not since the Lille visit to Torcoing's Musee des Beaux Arts have I seen such intelligent, and exciting curation; where beautiful classical sculpture is allowed to converse with contemporary objects, creating new and exciting dialogues. 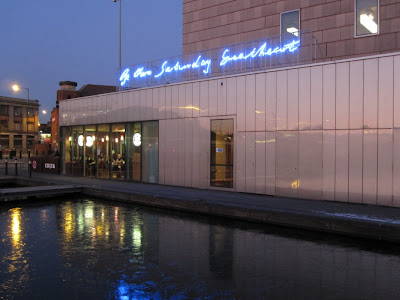 Fiona Banner's piece 'Be There Saturday Sweetheart,' which was originally commissioned for the opening of the gallery, and taken from one of Lady Epstein's love letters, was back on display - and looking great.
The Party exhibition was also really enjoyable - and had some of my favourite artists, altogether in one place. Go and see it - it's fantastic.
Posted by Anna Francis at 6:02 PM No comments:

Putting the love together 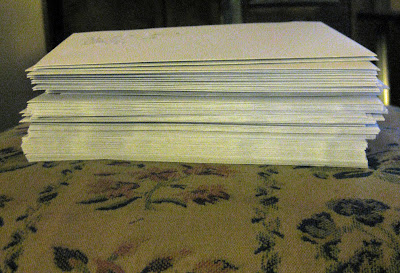 So all of the requests are now in from people wishing to send a love message for Valentine's Day. I have put them all in the envelopes and addressed them, and now I just need to put the stamps on, and then we are ready to go.
I think I will post them off tomorrow - since I was stingey and bought second class!

Posted by Anna Francis at 11:26 PM No comments: