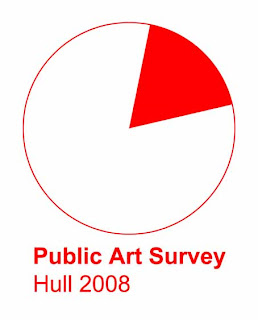 Stephen Sharp: Public Art Survey - Hull, 2008.
Artist Stephen Sharp and I are collaborating on a project for Hull's Latitude Festival: an exhibition of publicly sited art throughout the city of Hull (28 November - 14 December, 2008.)
We first identified some artistic synchronicity in our practices in February, when we were both exhibiting art works within the public realm in Stoke-on-Trent city centre which were the result of public consultations exploring the impact of art on public space. Stephen's work was generated through a public vote, displayed on a billboard where the public could respond to the statement: Public Art regenerates local economy by voting in a phone poll; the results were shown on a billboard. My work was generated through public consultations outside of recently appropriated art spaces, that had been disused retail space in Stoke-on-Trent and Bristol, the work asked the public questions to ascertain the impact that the new use of the buildings might have on the public passing by. Click here for details from earlier blog.
"Our project for Latitude is to place ballet boxes in locations around Hull, responding to the festival itself and asking people to vote on a question about public art and its effect on the surrounding area. People will be vote via a ballot paper. After a period of 10 days the votes will be counted and the results will be presented on two different limited edition posters, designed by each of the artists for people to pick up and take away.

The project will explore ideas around the use of the term 'public art' and 'public space' as well as contesting and redefining issues surrounding site, place, and location.

People will be able to check out the voting and results on the Public Art Survey blog."

I think the process of collaborating on a project with another artist will offer new avenues for investigation, in particular the idea that each of us will make a response to the city of Hull (which neither of us have visited before) each designing a different poster by which to disseminate the results of our poll will be very interesting. The people of Hull will be told that there are 2 ltd. edition posters, and may be encouraged to cross the city in order to get their hands on the other one.

We will visit Hull on November 29th - so more details then...

Posted by Anna Francis at 5:51 PM No comments:

The Future Visions of History Newspaper has been distributed across Liverpool today!
A real anti-capitalism of culture stance has been taken with the paper, and I was really pleased to be included. In fact as it turns out I am actually the centrefold! Now that is something to sing about. The paper is a collaborative curatorial project by Penny Whitehead and Daniel Simpkins, commissioned by Open Eye Projects and selected by Rebecca Lennon.
"Over the course of a day during the 2008 Liverpool Biennial, this project will spread, like a virus throughout the streets of the city. Local, national and international practitioners representing a range of disciplines including visual art, activism, architecture, cultural theory and social geography will contribute varied and engaging responses to issues surrounding Liverpool, its recent history and its future, providing an antidote to the city’s hegemonic literature, art and culture."
Go to Dan Simpkins' or Penny Whitehead's websites for more info.
My piece for the paper was the Long Photograph of Venmore Street, Anfield and a textual element consisting of the lyrics of the Liverpool FC anthem 'You'll Never Walk Alone.'
Posted by Anna Francis at 5:37 PM No comments:

THERE IS BEAUTY IN THE CITY goes global 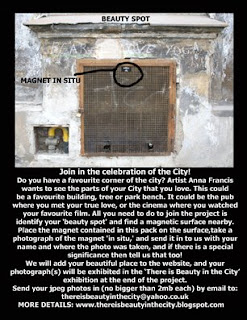 There is Beauty in the City goes global!
The people of Stoke-on-Trent and all those involved in the original Beauty project were so positive about the experience that I have decided to open the project up in order to see the Beauty in Cities worldwide. This was mainly due to hearing news that the magnets had made there way to other cities, as far flung as Italy! So I have set up a Facebook group that anyone can join, and sent out invites for people to request a magnet pack: by emailing thereisbeautyinthecity@yahoo.co.uk with their address. 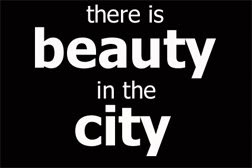 You can click on the magnet template above, and then print it off yourself: the original magnet is 3.5inches X 2 inches. So print one off and get sticking it in beauty spots in your city! Or if you want: email me for a magnet pack. Once you have placed your magnet/sign in situ, take a photograph of it and send it in to the 'there is beauty' email address. (jpeg - no bigger than 2mb) and I will upload it to the 'There is Beauty in the City' Blog.
The facebook group is now open: and called There is Beauty in the City. Sign up now and invite your frineds to join too! Lets get celebrating the Beauty in Cities Worldwide!
Posted by Anna Francis at 12:55 PM No comments:

It is now 6 years since I completed my MA in Fine Art, and therefore six years since I last had a studio space. The residency at Harrington Mills over the summer reminded me of the benefits of working within a studio environment, and in particular there were two elements that I realised that I had been missing. Firstly, of course, when space is limited it becomes easier to work on a small scale, and working as I do, mainly with photographic and text based works - the work tends to stay on the computer, and never see the light of day. So the first thing I have been missing is having the physical space to see my work in the flesh, and to actually make work off the computer - onto paper. The second thing that I have been missing, is of course the social aspects of having a studio space: having other artists to talk to on a daily basis, other people who might have an interesting insight, or a new perspective on what you are doing. I am really pleased then to have sorted myself a studio space at the AirSpace gallery I have only had my space for a week now, and have only managed two afternoons so far due to being busy at University, but i am really hopeful that this could mark a whole new phase of practice...I'm looking forward to getting stuck in. Friday afternoon was spent in the studio working on the Anfield long photograph for the Future Visions of History newspaper which will be coming out across locations in Liverpool during the Biennial. This is a collaborative, curated project by artists Daniel Simpkins and Penny Whitehead Future visions is
"...a free one-day newspaper exploring regeneration, decay, the role of the artist, and the repetition of history in the context of Liverpool as European Capital of Culture. The newspaper will be distributed over the course of a day during the Liverpool Biennial, via a series of mapped routes that will take in relevant aspects of the city’s landscape, culture and communities, including regeneration areas, affluent and deprived suburbs, cultural and commercial quarters, shopping centres, government buildings, art institutions and artist-run spaces."

This is how much of the Anfield Image I got done during one afternoon in the studio. The photographs were taken on Venmore Street, Anfield. There are 24 houses on this section of the street, and at this point I have only stitched together 7. The Liverpool Football Club Stadium is just at the end of the street. The streets all around the current stadium are emptied and derelict, like this one. I spoke to some of the people that are still living in the area during my visit to take the photographs, there is an idea that the houses were emptied because of the Clubs planned move to Stanley Park, which would leave the Anfield area ripe for regeneration...The club's plans to move have been put on hold however, so who knows how long these streets will remain in this state. It does seem very shocking that the streets around such a large and wealthy company as Liverpool F.C. should be left like this, more shocking is the fact that on many of these streets, where almost every house is boarded up and falling down there will be one family home still occupied, as is the case with this street, but I haven't stitched on the occupied house yet - watch this space if you want to see the complete street...
Posted by Anna Francis at 3:47 PM No comments:

A new addition to the House gallery network 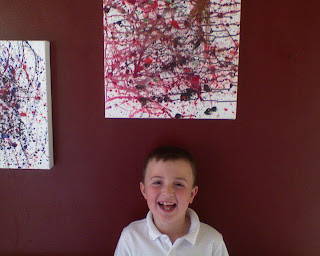 Jack, 7 of Stoke-on-Trent has been inspired to join the House Gallery network, and has in fact invented 'Kitchen Gallery.'
Taking Jackson Pollock's action paintings as his starting point, Jack has produced a fantastic body of work, which is currently on display in his Kitchen gallery.

Click here to see the artist at work.
Posted by Anna Francis at 3:39 PM No comments: