On Friday, 20th February 5 Polish artists, visiting Stoke-on-Trent were given the following card: 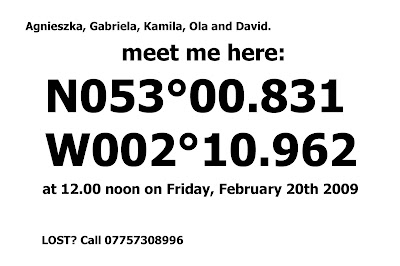 The numbers were co-ordinates for Cauldon Park, where I was waiting - dressed in my 'Official Tour Guide - Stoke-on-Trent' uniform. They were precisely on time, and this is what they saw as they approached: 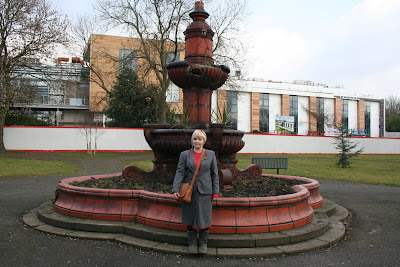 When they arrived I introduced myself as the city's offical tour guide and explained that we would be taking a tour of the City centre's regeneration zones. I gave a bit of potted history on the City before leading them nito Hanley Park.

I took them over to look at Emily Campbell's public art piece. We discussed the way that the texts were generated, and the fact that artist's often have to negotiate and compromise when working within the public realm - as was the case with this piece. (I assisted Emily with workshops and consultations during the making of the works.) 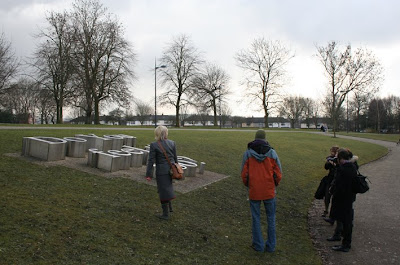 We talked about the 'plonking' approach to public art favoured by commissioners and how Emily had wanted the texts to be surprises for the walker in the park - not obvious monoliths. The commissioning council wanted something big and shiney - and so this piece 'Do you feel it too' represents the artist's compromise. We discussed these works in the context of the Park's crumbling Victorian features. 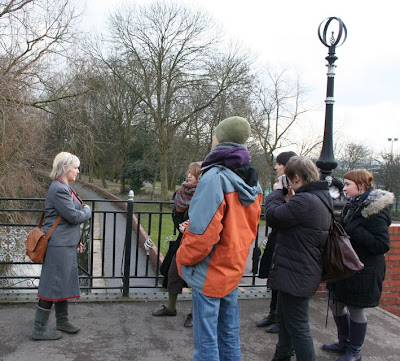 And the fact that shortly after installation of the works the pavilion, where some of the art workshops took place was boarded up. 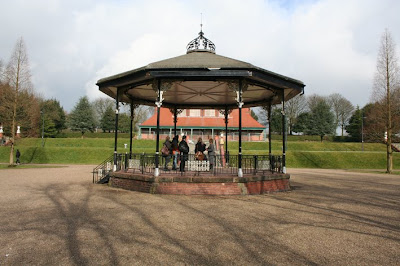 We stood on the bandstand, donated by George Howson (a local Potteries owner) in 1896. Back in the 20s and 30s this bandstand was the place to be for courting couples to come and dance. It now stands empty; no music plays here any more. 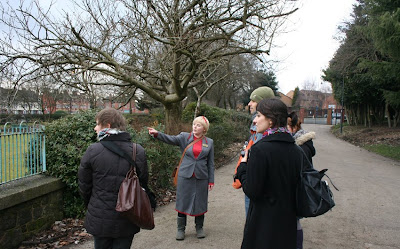 We looked at the bowling greens and I briefly summarised the rules. We then wandered up College Road, past the Atlas works where Renew are creating new space for small businesses from the old pot factories. 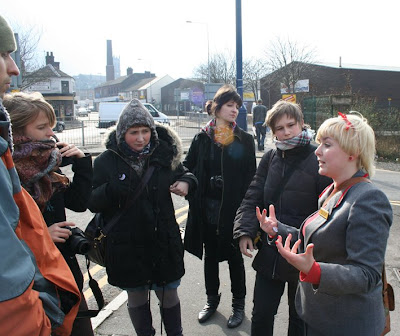 We made our way into town, I pointed out a few things on the way including Doug's barber Shop and the best piece of grafitti. We stopped at the immense expanse of open space, which is the Tesco development site. Once filled with factories, pubs and other buildings, this enormous clearance area is due to make way for perhaps 'the biggest Tesco in Europe.' David said as we approached 'I feel like I'm at the Beach.' From this point it is possible to see the first bottle oven on the route - which seemed interesting; to discuss Tesco in the context of the City's past.
We made our way into town, past the gap where the cinema used to be, and then to various sites of interest around the centre. We ended the tour with a visit to the bus station, a dated piece of architecture, due for demolition as part of the new east/west development. The development will see a massive new shopping mall land on the area, and will also mean the demolition of the Coachmakers Arms, the last community pub in Hanley - which was our last stop on the tour - for a pint. It was at this point that i revealed that I was not really a tour guide, but an artist, and that they had just been participants in a living art work. They said they really enjoyed the tour, and it turned out that Ola is a tour guide in Warsaw!
Posted by Anna Francis at 8:38 PM