Beauty in the City exhibition

There is Beauty in the City has been going on for over 2 years now, and this week sees the first Beauty in the City exhibition on display.
The great thing about this for me is that I am no longer running the project. I absolutely love the project, but was finding it really difficult to keep up with - there is a lot of administration to do, answering emails - sending out magnet packs, uploading images to the blog, and with everything else I found I was not having enough time to run the project properly, and there was a period of a couple of months when I didn't do anything. So I was really pleased when Glen Stoker volunteered to run things for me. He has successfully revived the project, introducing ideas like the photo of the month, and he has secured 3 exhibitions for 2010, one in Stoke-on-Trent, one in Spain and one in Poland, which is really fantastic. The first one opened on Monday in the window of the AirSpace Gallery, but also Glen has secured one of the giant Televisions in the Panasonic shop's window further up broad street - where all of the images taken as part of the project so far will be shown on a slide show. Here is the blog entry from the Beauty in the City blog written by Glen Stoker:

there is beauty in the city has become a piece of urban beauty itself. set in the window exhibiting space of AirSpace gallery in stoke-on-trent, the exhibition consists of a block of analogue televisions in varying states of disrepair and visual quality, playing a slideshow of all the project's submitted images, 24 hours a day.

There is Beauty in the City is a collaborative project with the people of the world, which encourages a reframing and rethinking of the urban spaces that we inhabit using a magnet as a tool to renegotiate familiar territories.

The project could easily be (mis)interpreted as an effort to simply collect and label images of urban spaces and indeed if the project was to be undertaken by just one person or one individual, this idea of ‘beauty’ could become very problematic.
The fact that many people’s views on ‘beauty’ are included in the project makes for a very interesting end result. Although ‘there is beauty in the city’ reads rather like a statement, the processes of photographing the phrase in situ and determining which areas to include, are quite inconclusive and questioning in nature. Additionally, the fact that many different people are working with this phrase on their own terms means that the idea of there being beauty in the city is open to a wide variety of interpretations, which makes it hard for ‘beauty in the city’ to become a fixed idea. It is important to see the phrase ‘there is beauty in the city’ as essentially a starting point or tool for interacting differently with ones’ environment.

a big thanks to everyone who has taken part so far.

Is there a corner of your city that you want to flag up, draw attention to, or label as beautiful?

To join the project and get your hands on a magnet of your own, email: thereisbeautyinthecity@yahoo.co.uk

there is beauty in the city from glen stoker on Vimeo. 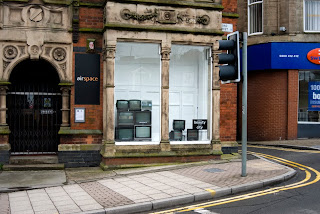 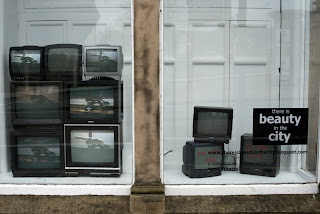 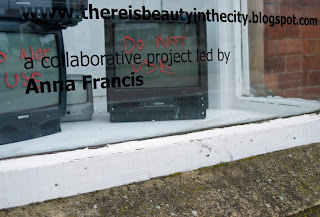 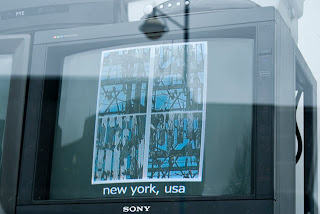 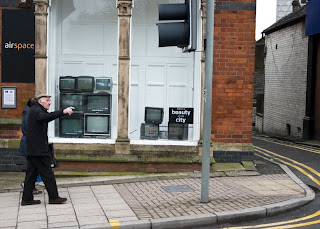 as a kid, i could never walk past a radio rentals or granada shop window, without stopping and looking in wide-eyed wonder at the mass of tv sets all generally showing one of the three available tv channels. i was seduced by the visual display, i dreamt that one day i could live in a place like this.
today, those shops are still in our cities. the shop names have changed, the channels have multiplied 100 fold, but they're doing the same thing -nudging at our aspirational materialist instincts and desire to be at the cutting edge of technological advance.
the other thing that has changed is the television itself. more than 80 years after john logie baird gave the first public demonstration of televised silhouettes and moving duotone images, in london's selfridges store, the era of the cathode ray television set is nearing its end. the analogue television and its system of 625 lines is set to become obsolete - forgotten and neglected as the world moves on to bigger, grander and newer ideas - digital, plasma, lcd and hd.
for the analogue tv, read human life - in a full life of, give or take, 80 years, we're born, we negotiate our uncertain early years, before blossoming into fully formed confident adulthood. then the decline as youthful modernity overtakes us, leaving us bewildered before being confined to the ranks of the neglected and forgotten. we die.
but we leave a legacy, in the shape of existence, history, experience and memory - invaluable in the shaping of the modern world and venerated as an indispensable component of what we become. 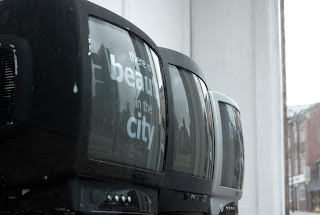 curated by glen stoker
Posted by Anna Francis at 1:17 PM