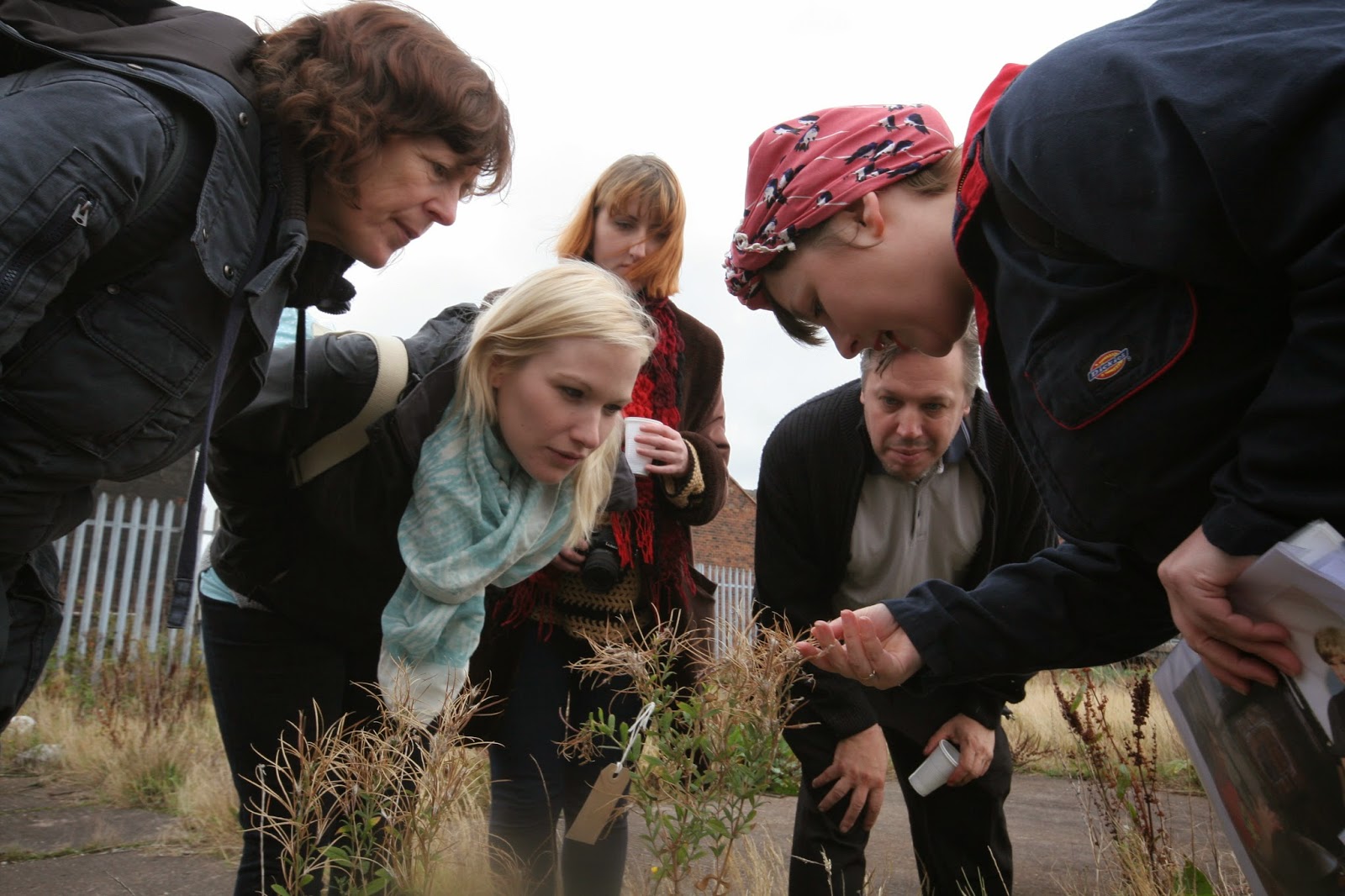 The final phase of the Birder's Paradise involved us returning to our 3 main sites to round up the findings and research with an exhibition and various activities and new works in each place.
The exhibition phase on the Spode Factory coincided with an exhibition which we had been invited to contribute to: The Journey's Pathways and Track Plans Exhibition. 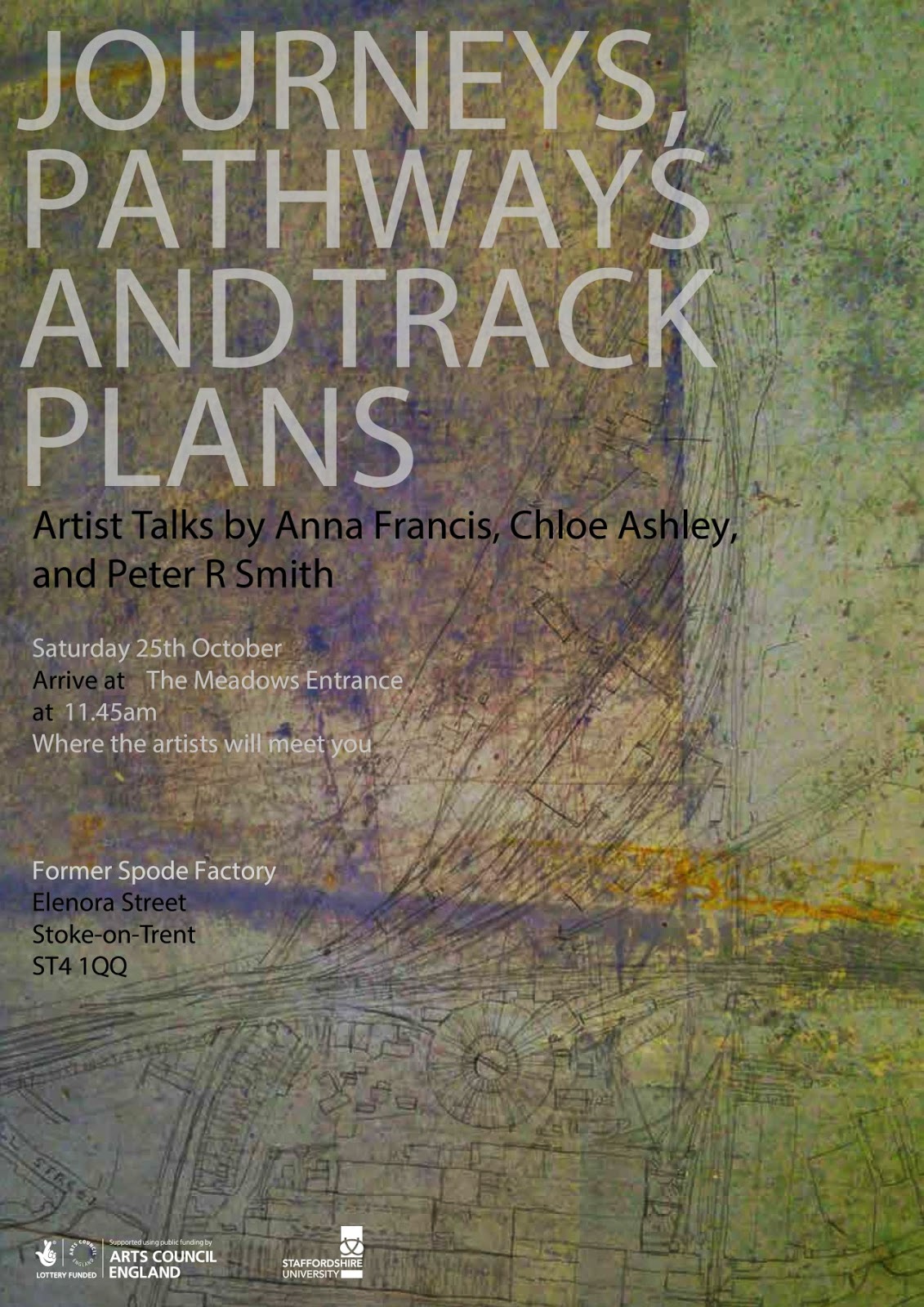 It was really fortuitous allowing the work made within the Bider's Paradise Project to reach a much wider audience, and feedback from the visitors to the show was amazingly positive.
We were able to exhibit works from all 3 of our main sites in the show, plus the mobile bird hide was on display throughout the duration of the 3 week exhibition. 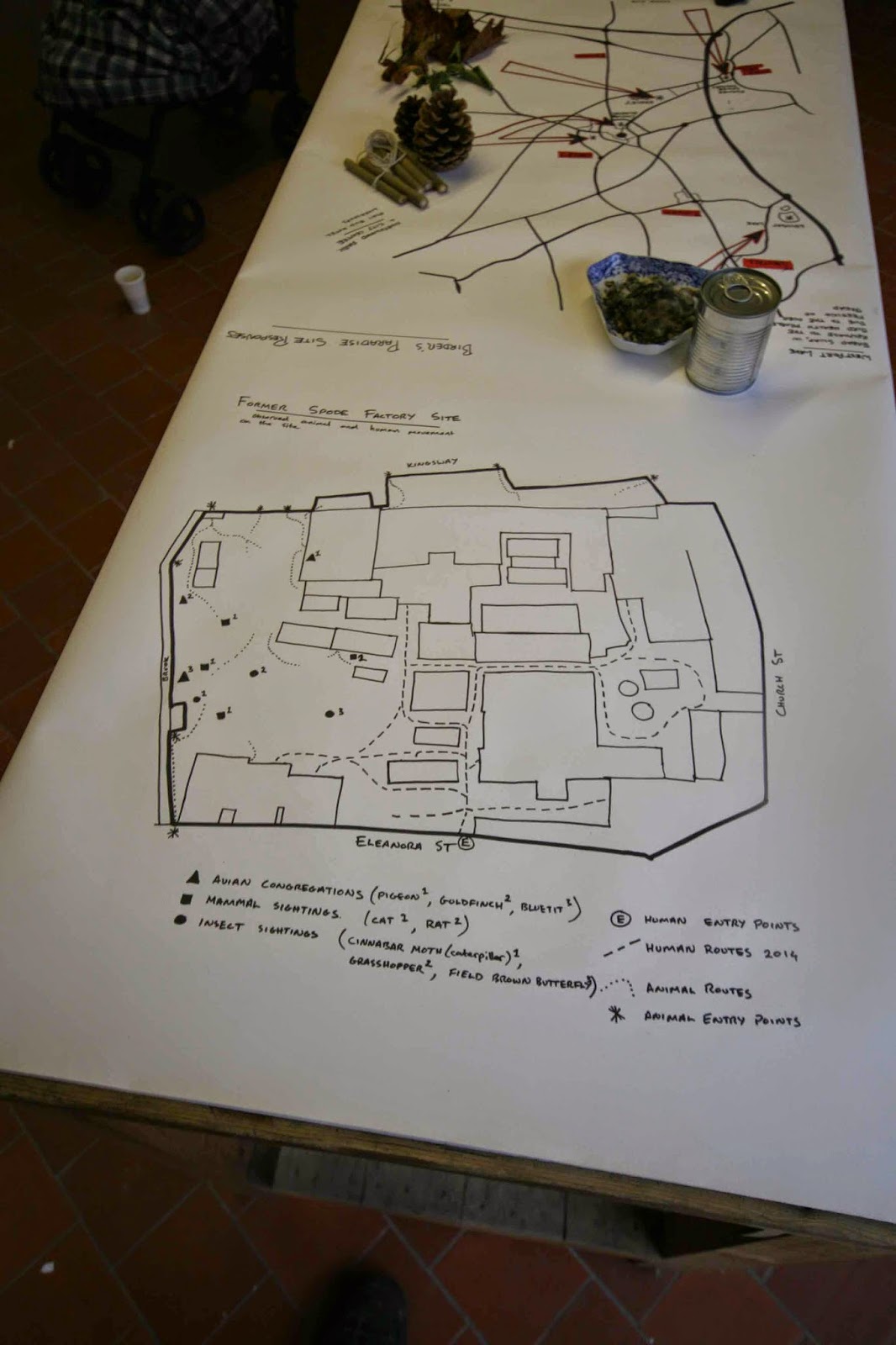 The elements of the show included a map showing our 3 main sites, a moss garden, created from  mosses washed from the Spode Factory Roofs by the rain. 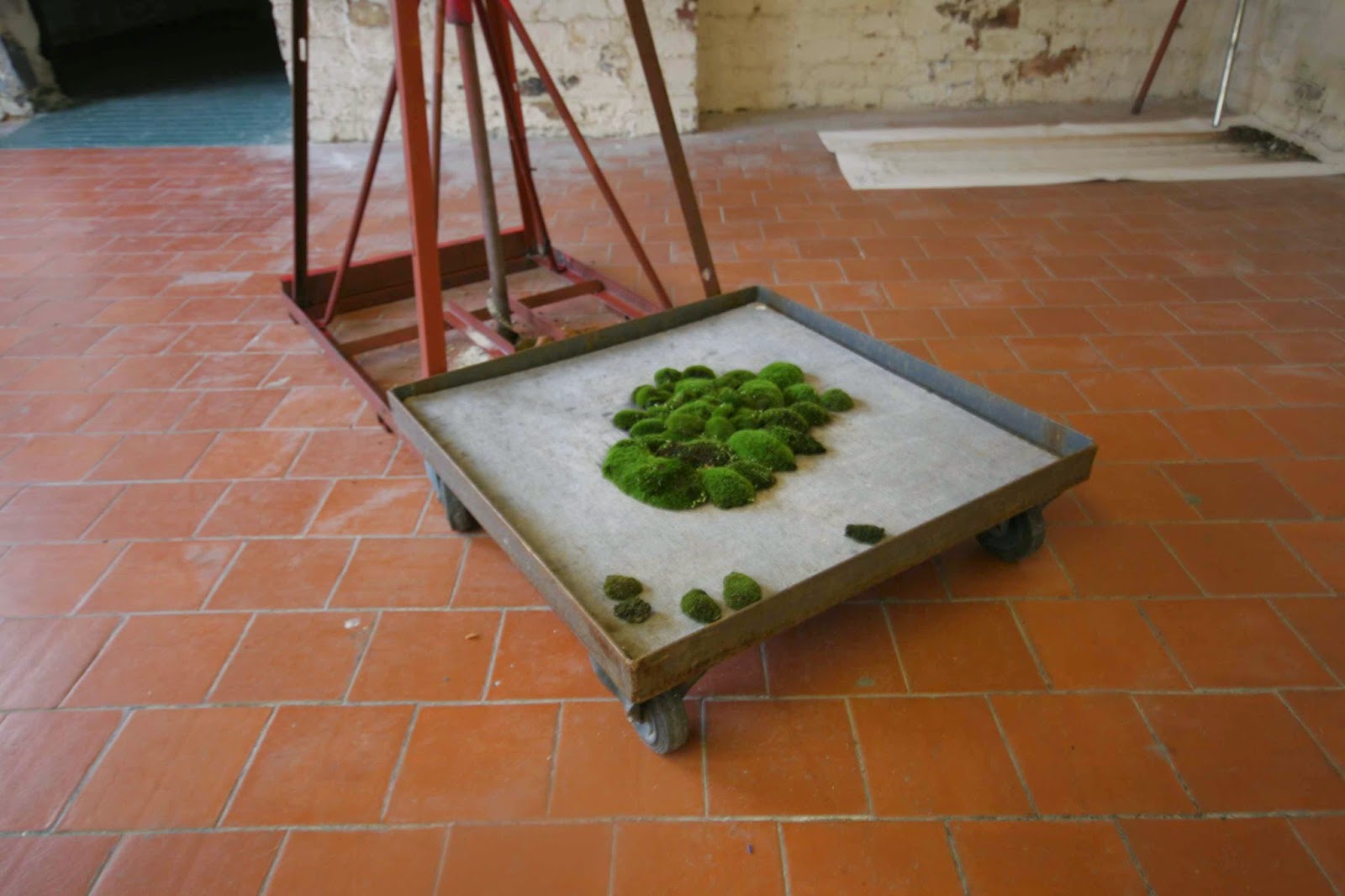 Andy exhibited his soil drill, made to take soil and ground samples on the sites, 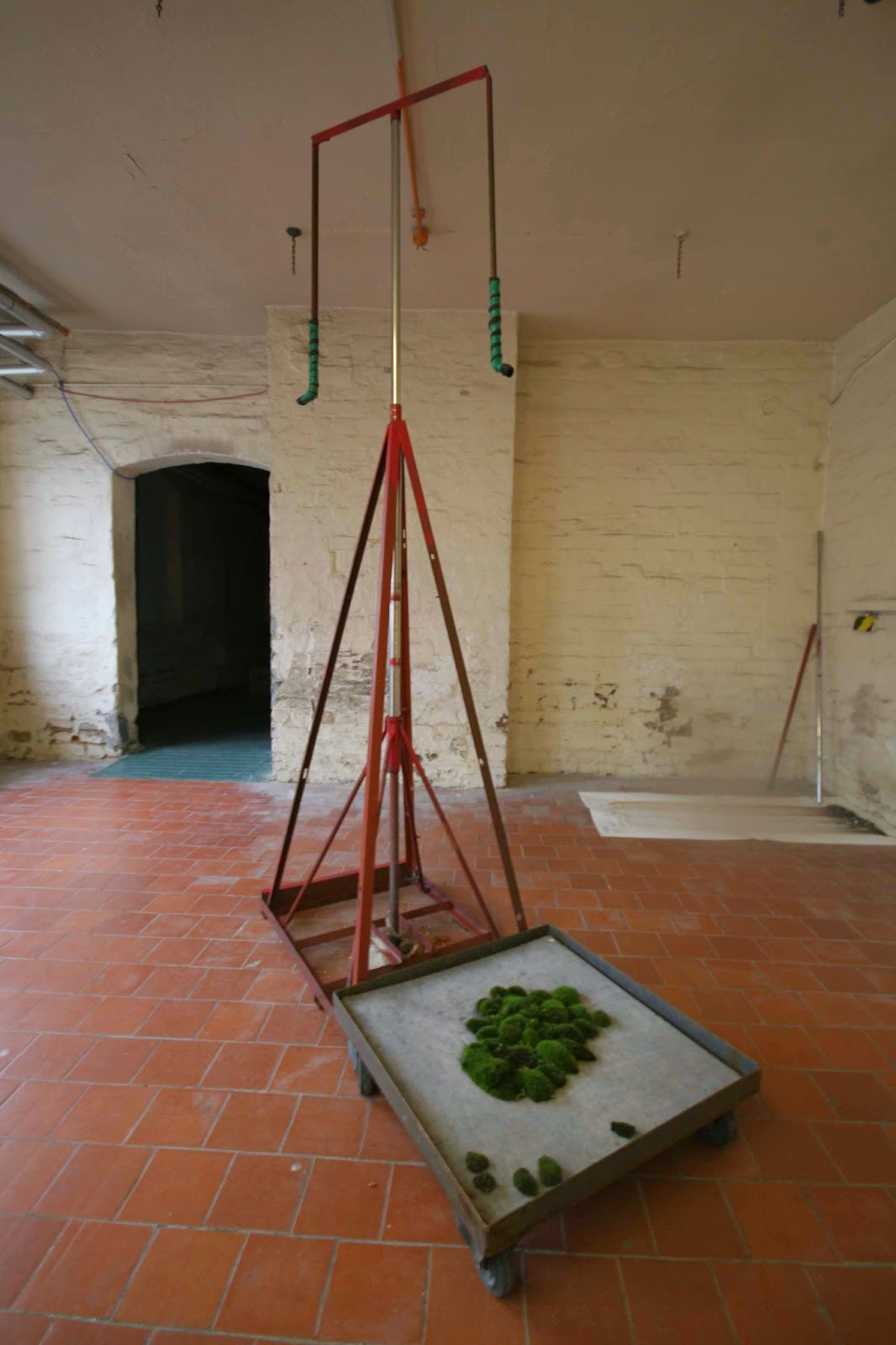 And a drawing made with the samples. I created three photographic collages (one for each site) which incorporated photographs of the 3 sites and a Penguin Book of Birds. 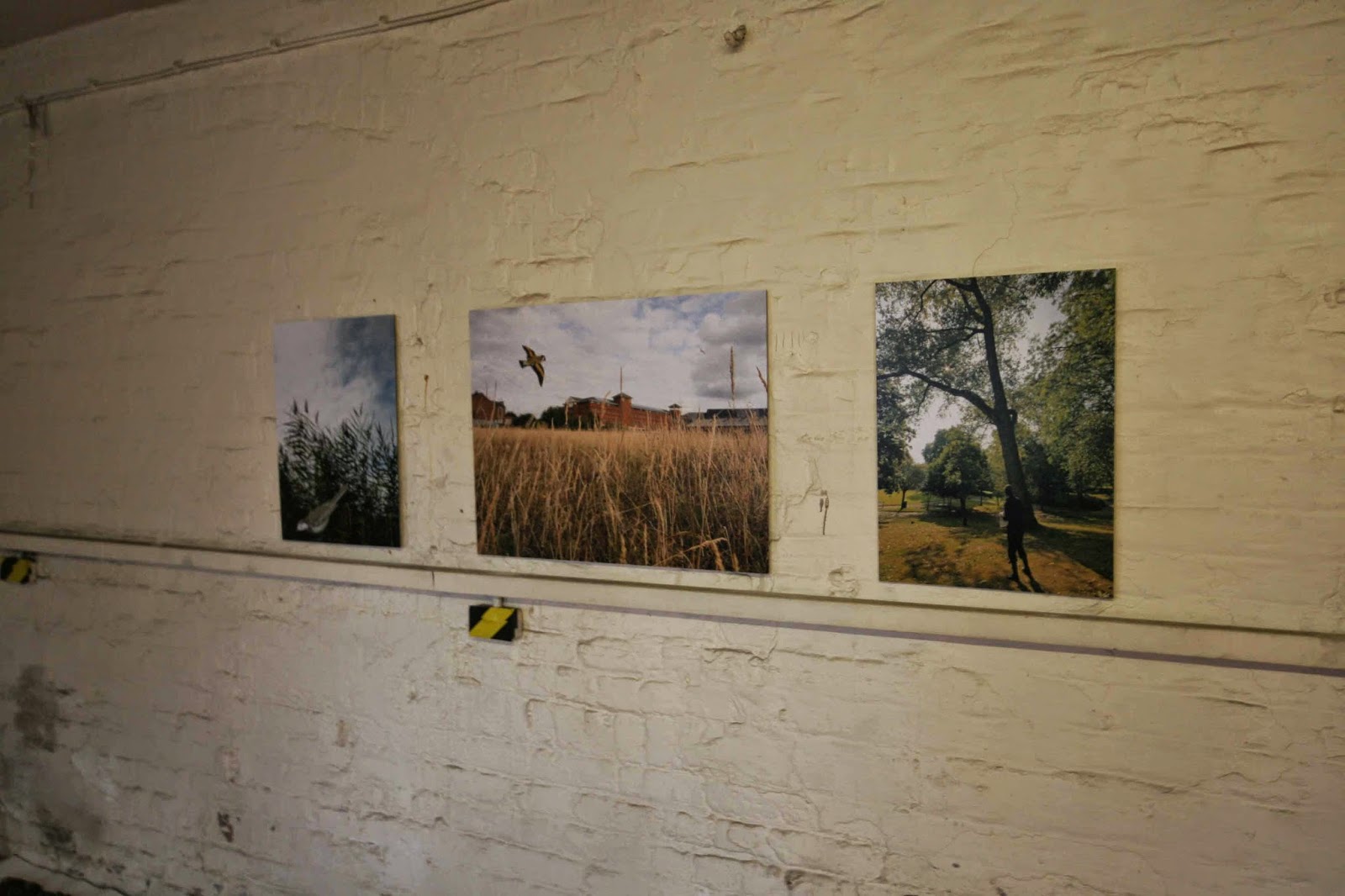 We also created a video, of footage from the 3 sites with a sound piece, based on activity which took place during our time on the sites. One of the real benefits of this project to us as practitioners was that it afforded us time to do some research, this included book based research as well as site exploration, and one book which became very important to us was a book of Staffordshire Birds from the late 1800s which catalogued the birds to be found in the county. It was a fascinating book, which became a real point of comparison for us. 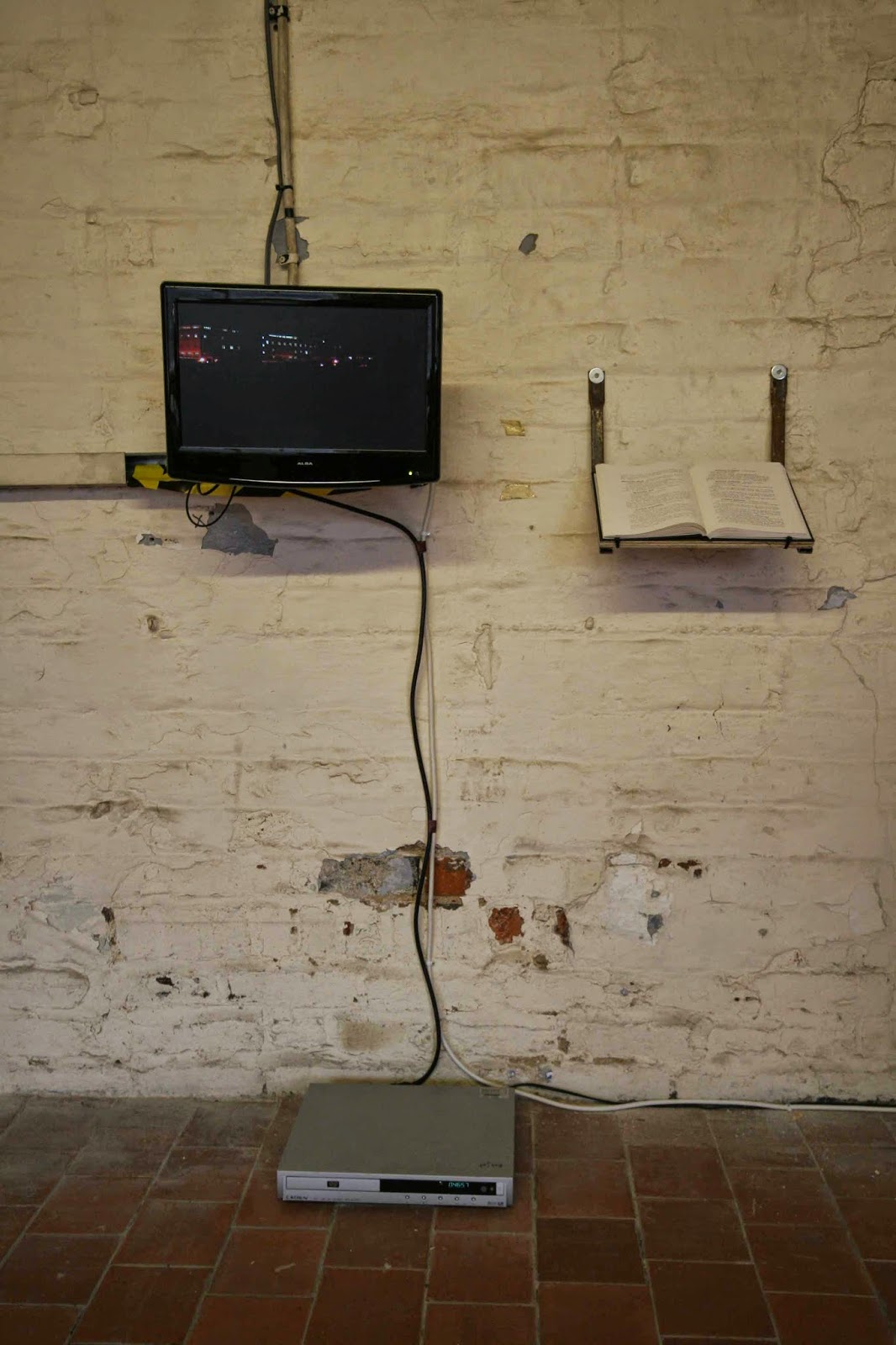 On one occasion we found ourselves going through the entire book, to see which birds on the list we had seen during our bird watching site visits. I read out the birds on the list, and Andy said Yes if we had seen it, in which case I would read about the sitings from the 1800s and the notes from keen birders, but if we hadn't seen it Andy woud say no, and we would move on. 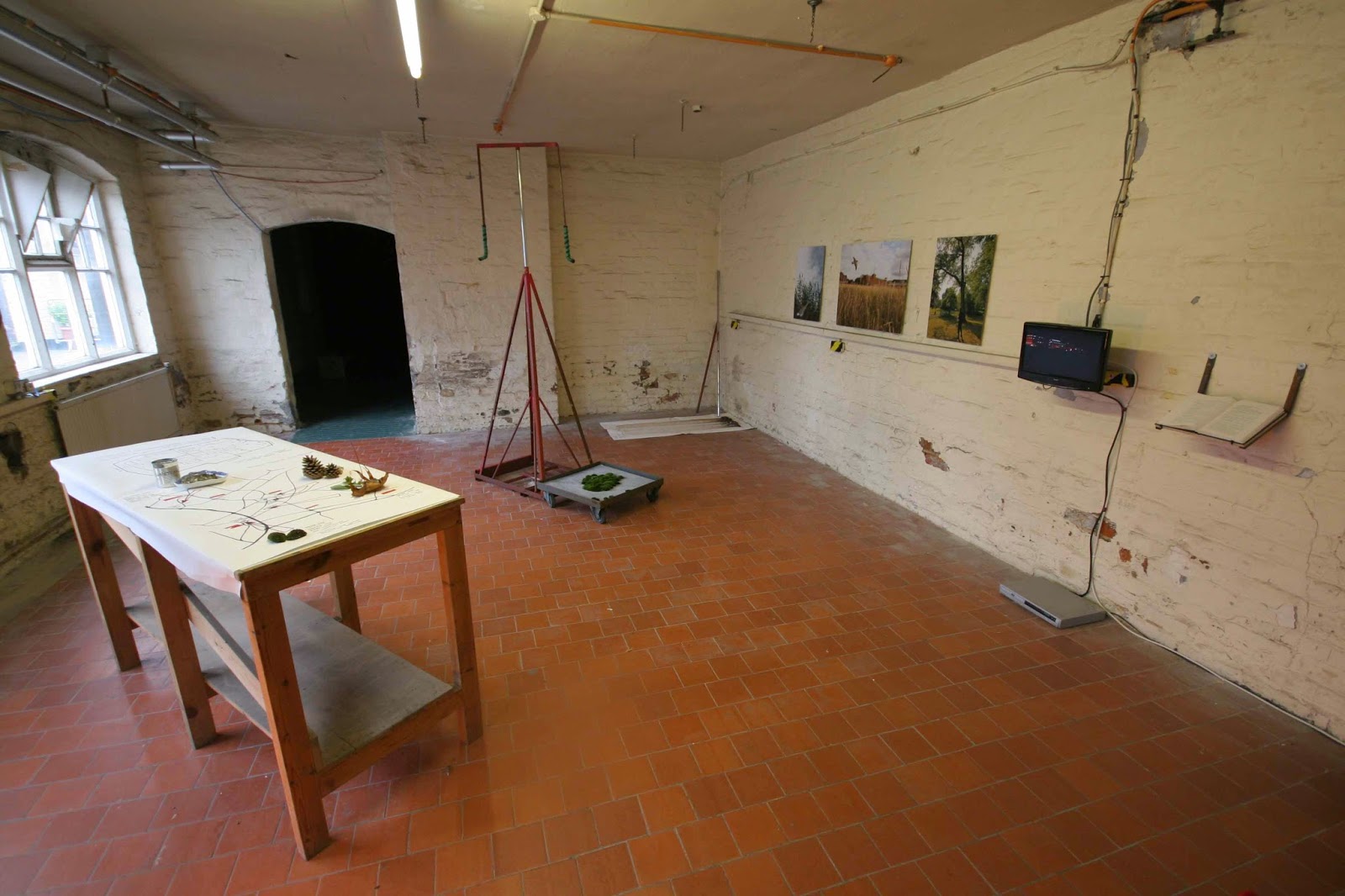 An interesting point for us was in relation to the goldfinch, a bird that is abundant in the city these days, the book described the declining numbers at the end of the 1800s and attributed the low numbers to the extreme industrialisation that was going on at the time - leading to a lot of green space being developed, and a decline in the goldfinches natural habitat. Post-industrial stoke is the perfect place for the goldfinch, who enjoy brush plants; things like teasles, which enjoy brownfield sites will grow plentifully, and are one of the goldfinches favourite foods. 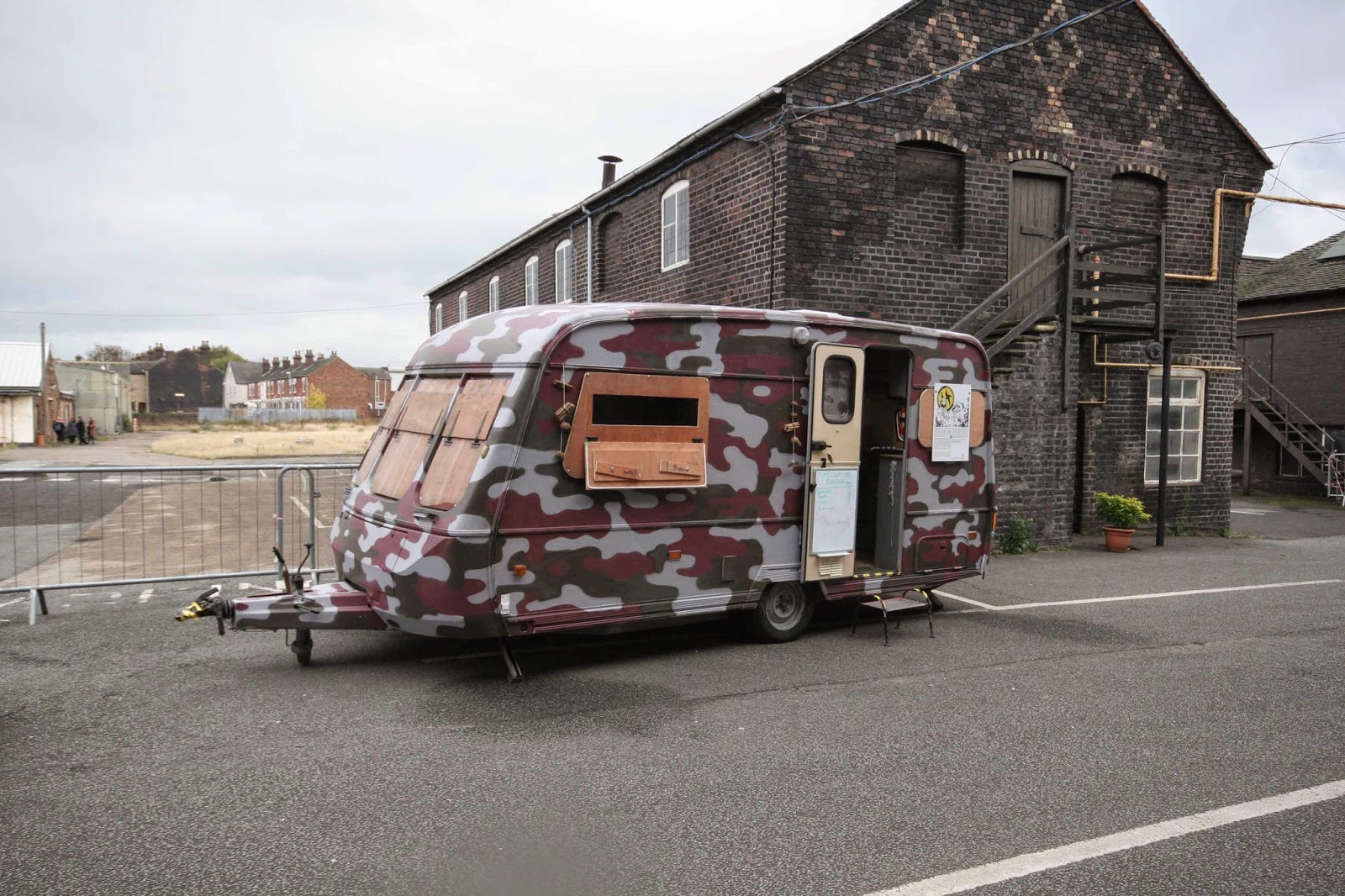 In addition to the exhibition, I lead an urban nature tour on the Spode Site. Participants heard about my practice, via an exploration of the plants and flowers growing around the site. 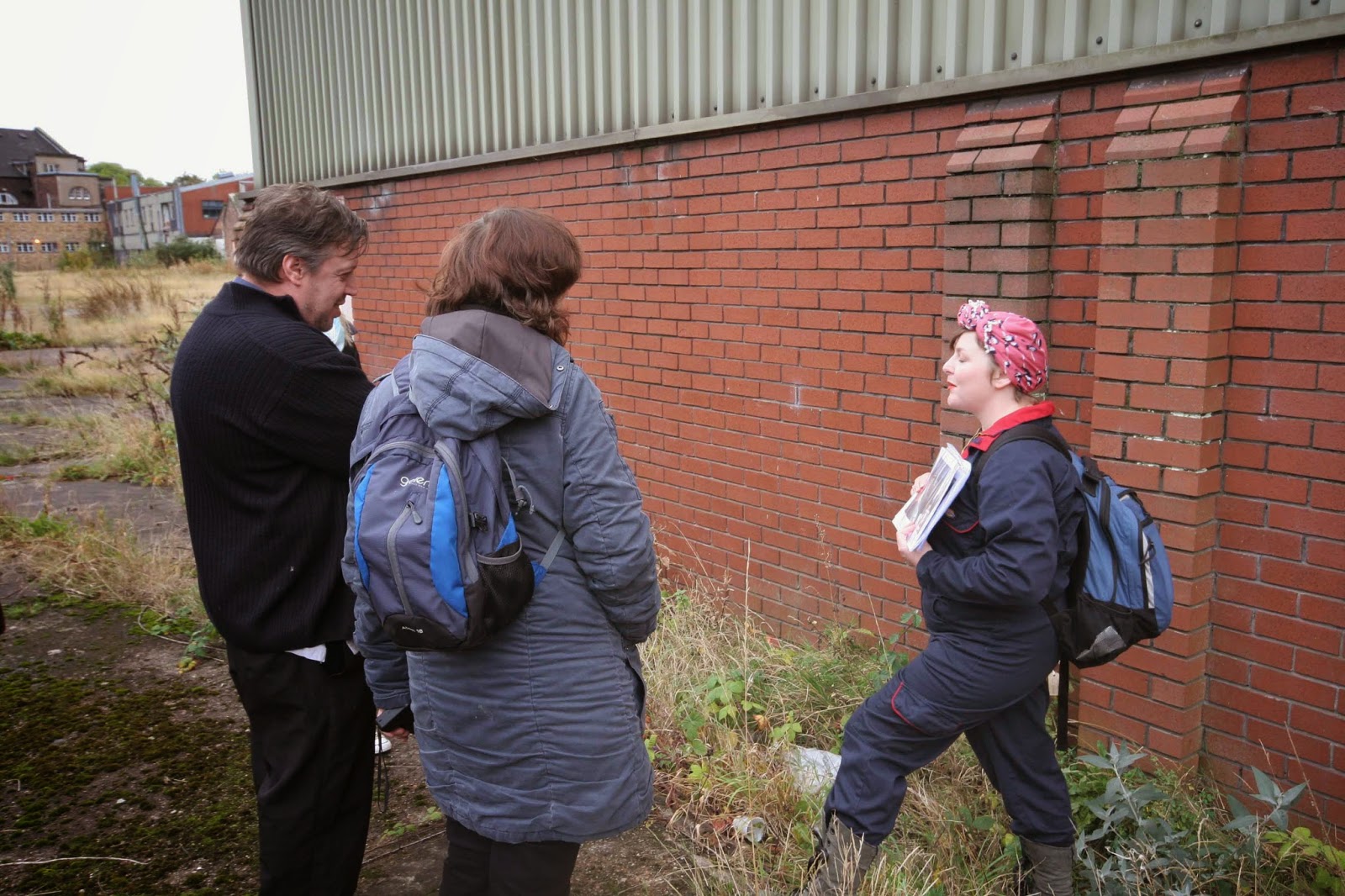 On the tour I had picked out 10 of Spode's wildflowers, and used each one as a prompt for my art works. At the end of the tour we made a list of plants to be found on the site, with the participants using the wildflower guides to identify some of the other plants that I had not pointed out, exploring the site themselves, and finding a new way to explore urban space. 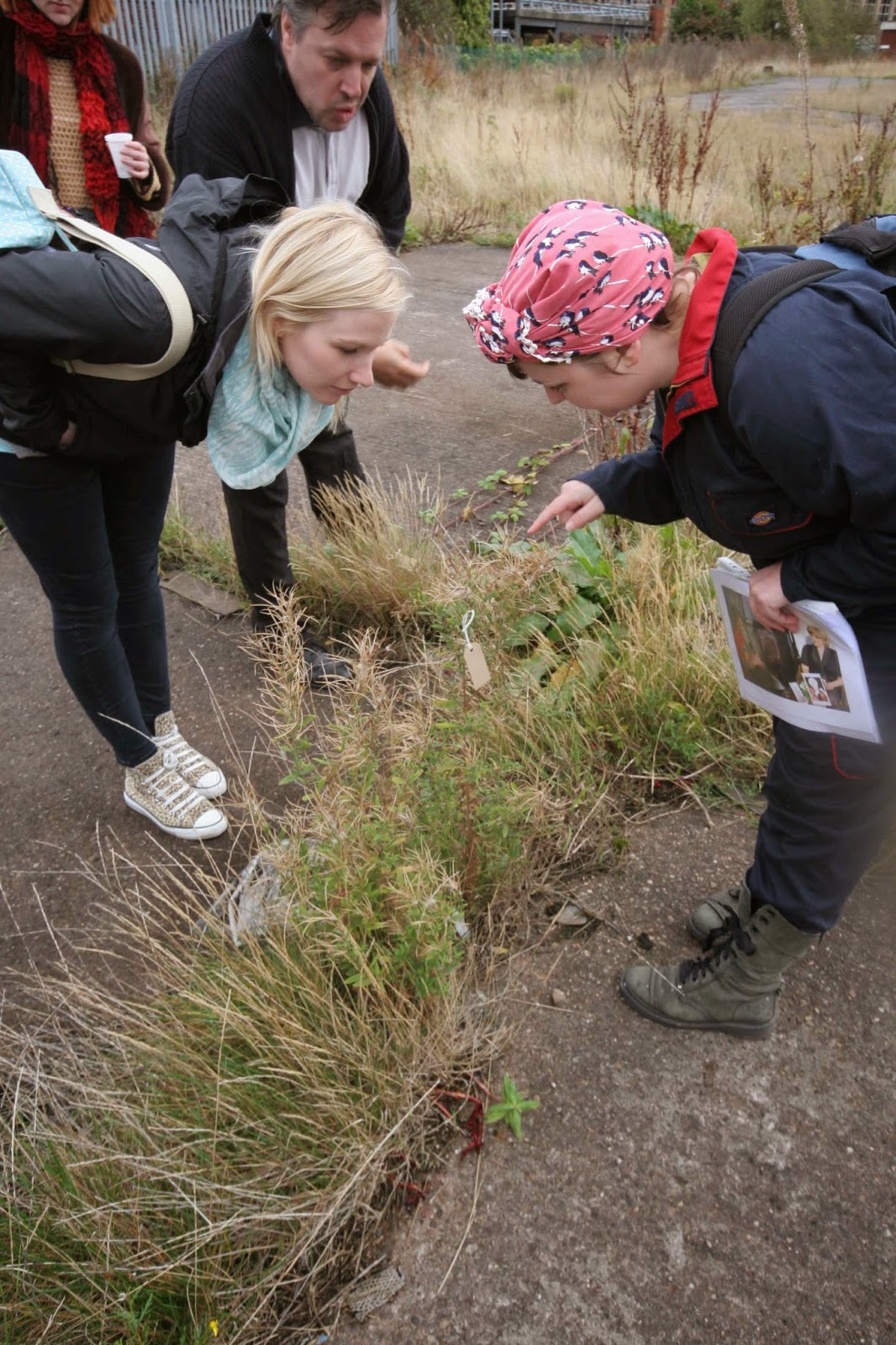 Our return to Westport Lake was very eventful. The visit was timed to coincide with the school half term, which worked well, as we met lots of families enjoying a walk by the lake. 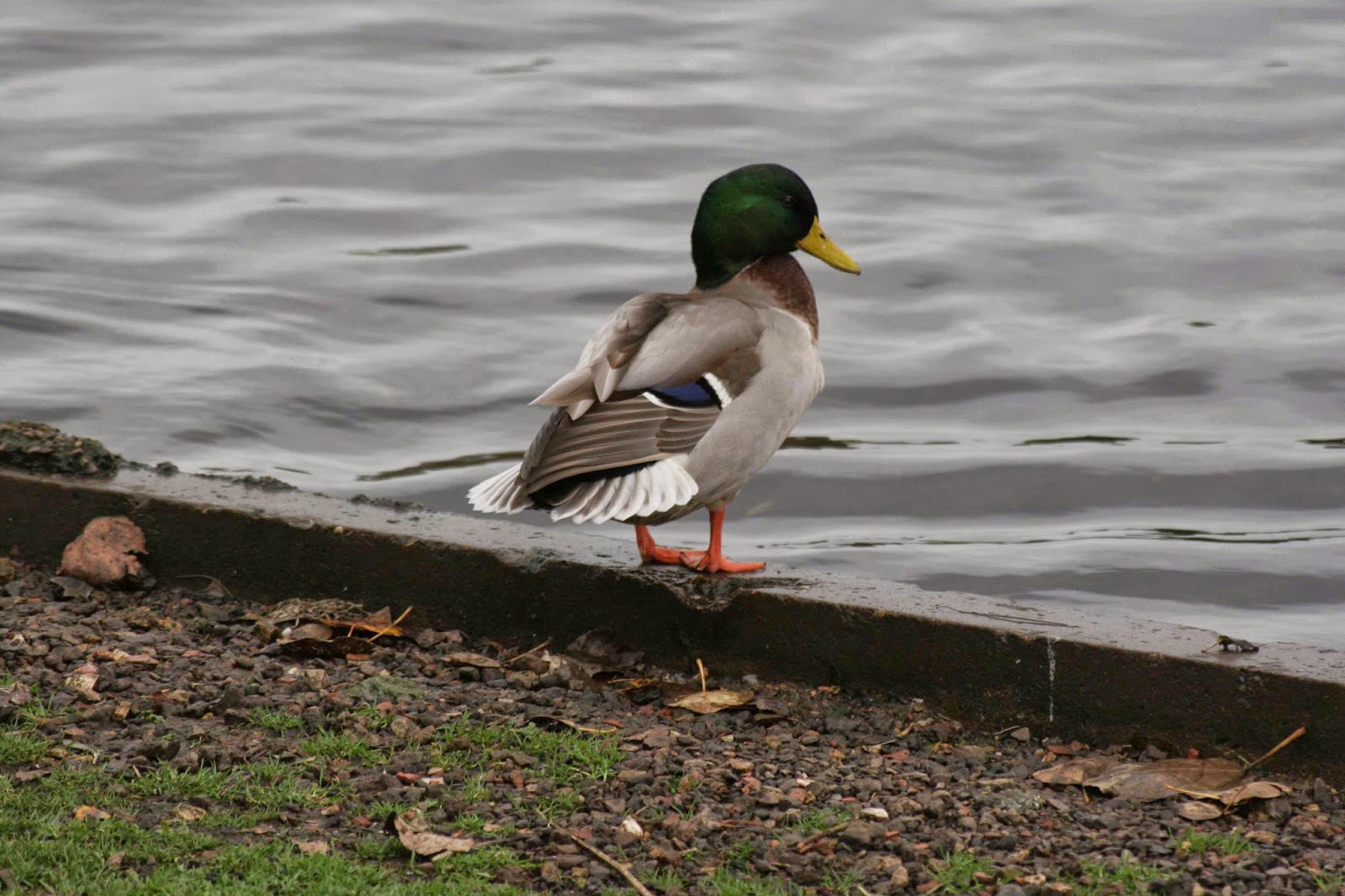 Our research and explorations at Westport Lake had uncovered the enormous problem they have there with bread being given to the birds, and the bread broom in the lake causing blue algae mentioned in my last post. In response to this we had commissioned sculptor Mally Mallinson to create 'Panem Anser' for us - 'The Bread Bird.' 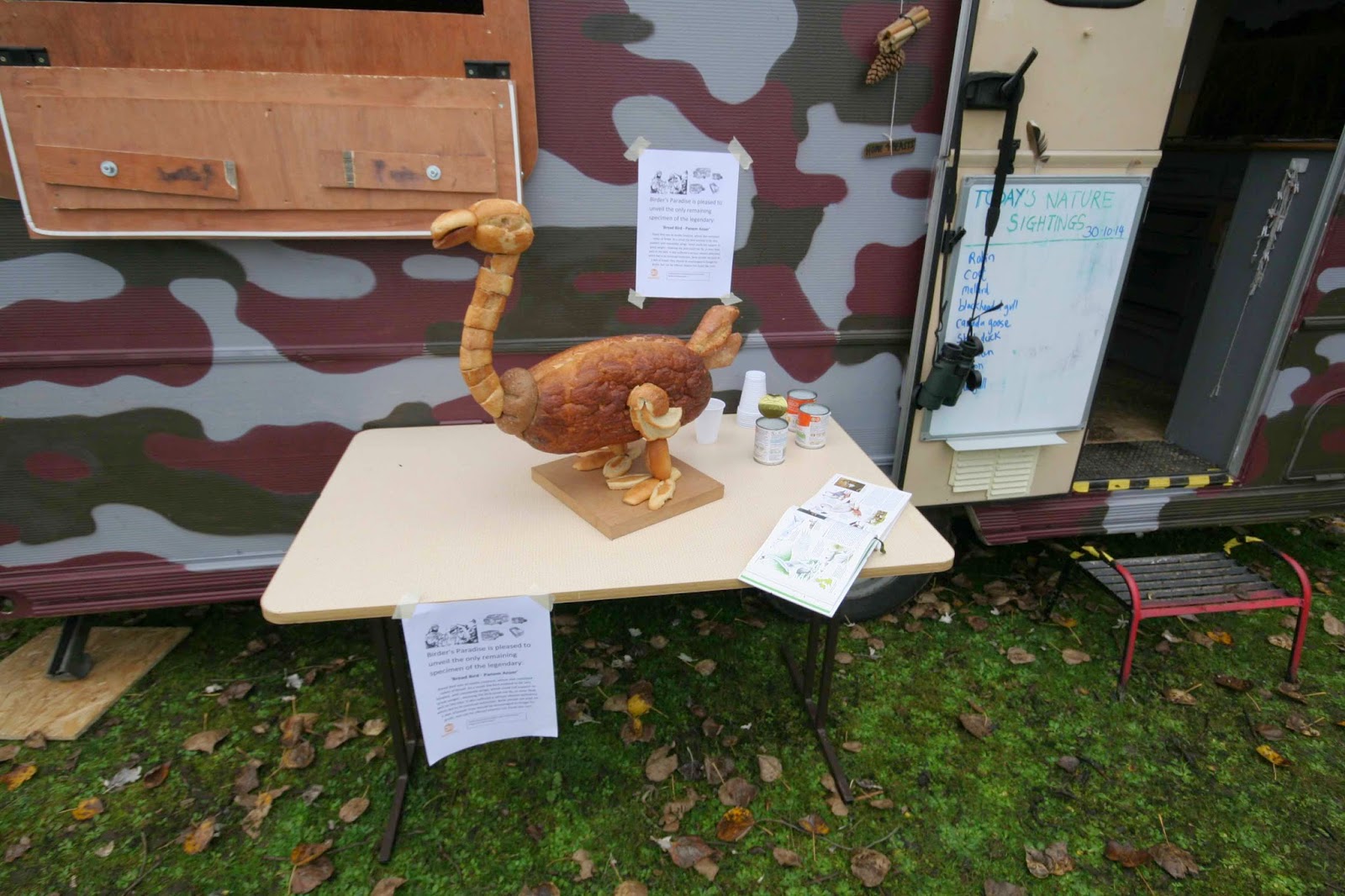 Bread Bird was on display during the day - and drew a lot of attention. We explained that this was the last remaining Bread Bird in the species, but that the Bread Bird had now gone extinct, as a result of Bread Bird's terrible diet of solely bread - leading it to suffer from Angel Wing, a wing deforming condition caused by a vitamin e deficiency. It was a great tool for speaking to people about the problem of feeding birds bread, and we also gave out a lot of corn as an alternative. 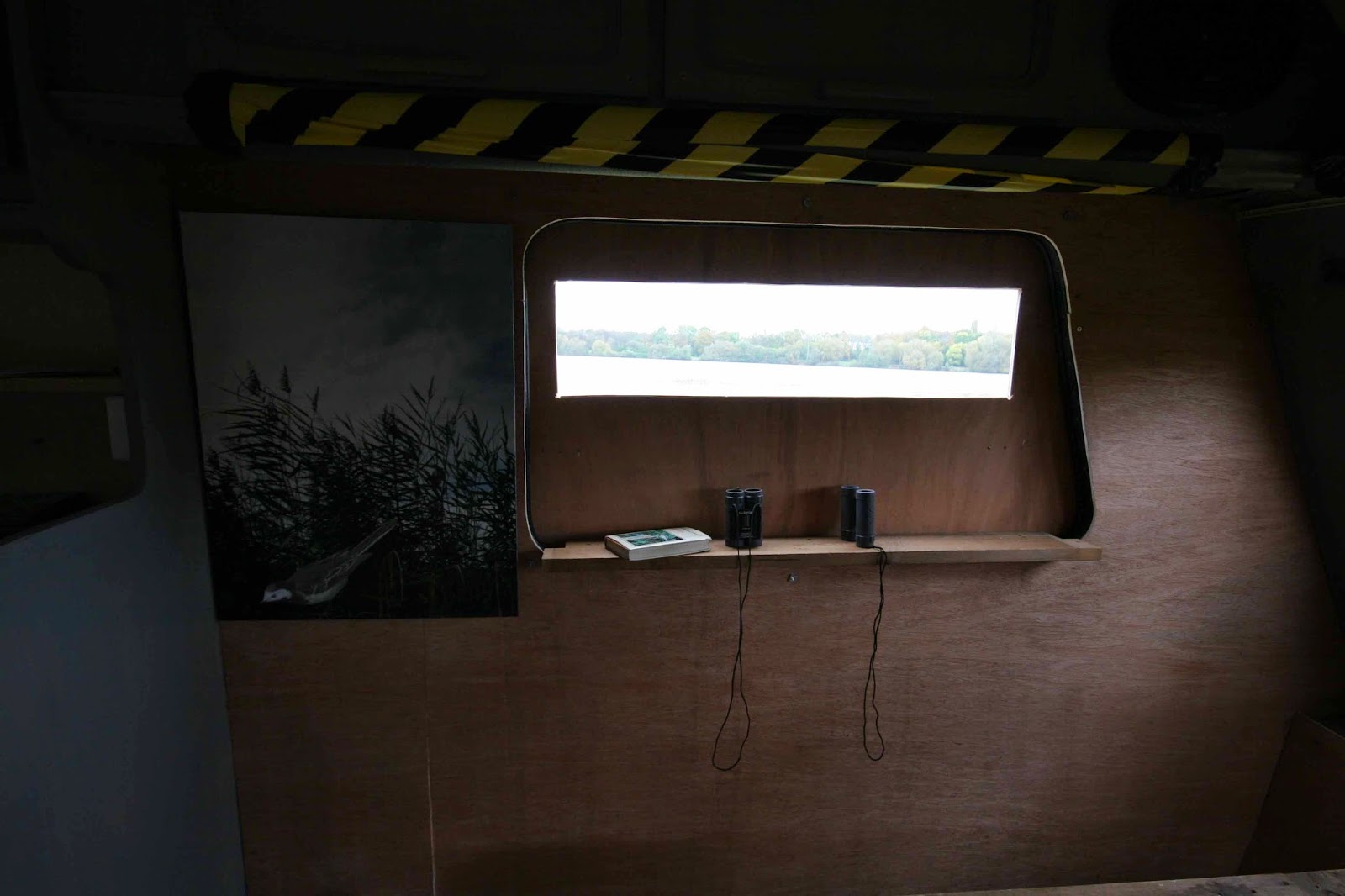 We had a lot of visits from keen bird watchers, nature lovers, and those just interested in what we were doing. One chap brought his bird watching diary to show us. 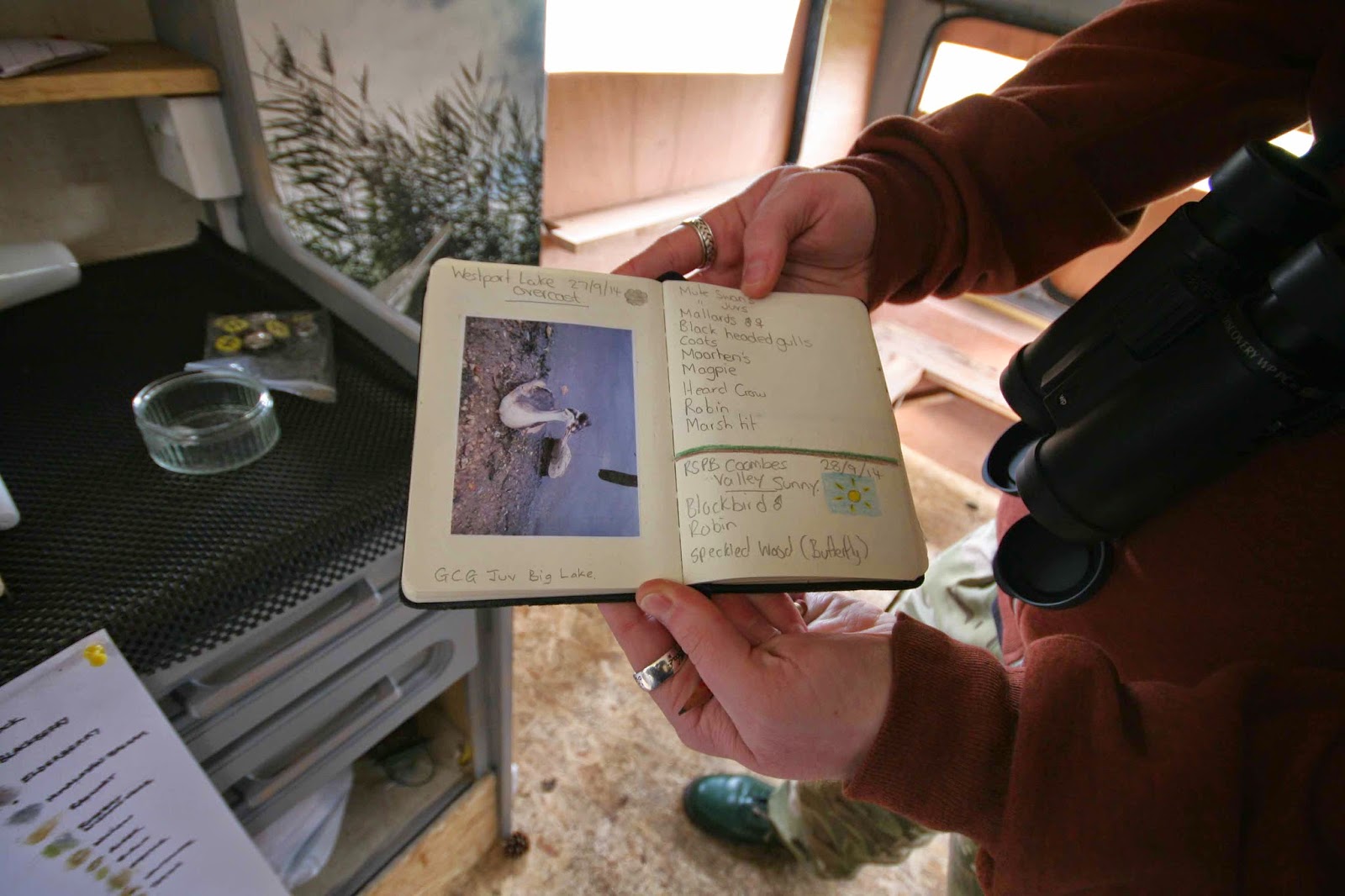 We were really pleased to also have a visit from a very keen bird watcher, Phil Charles - who brought his amazing monocular, which was more like a telescope. He visits the Lake regularly and is really keen to share his enthusiasm for birds with others. 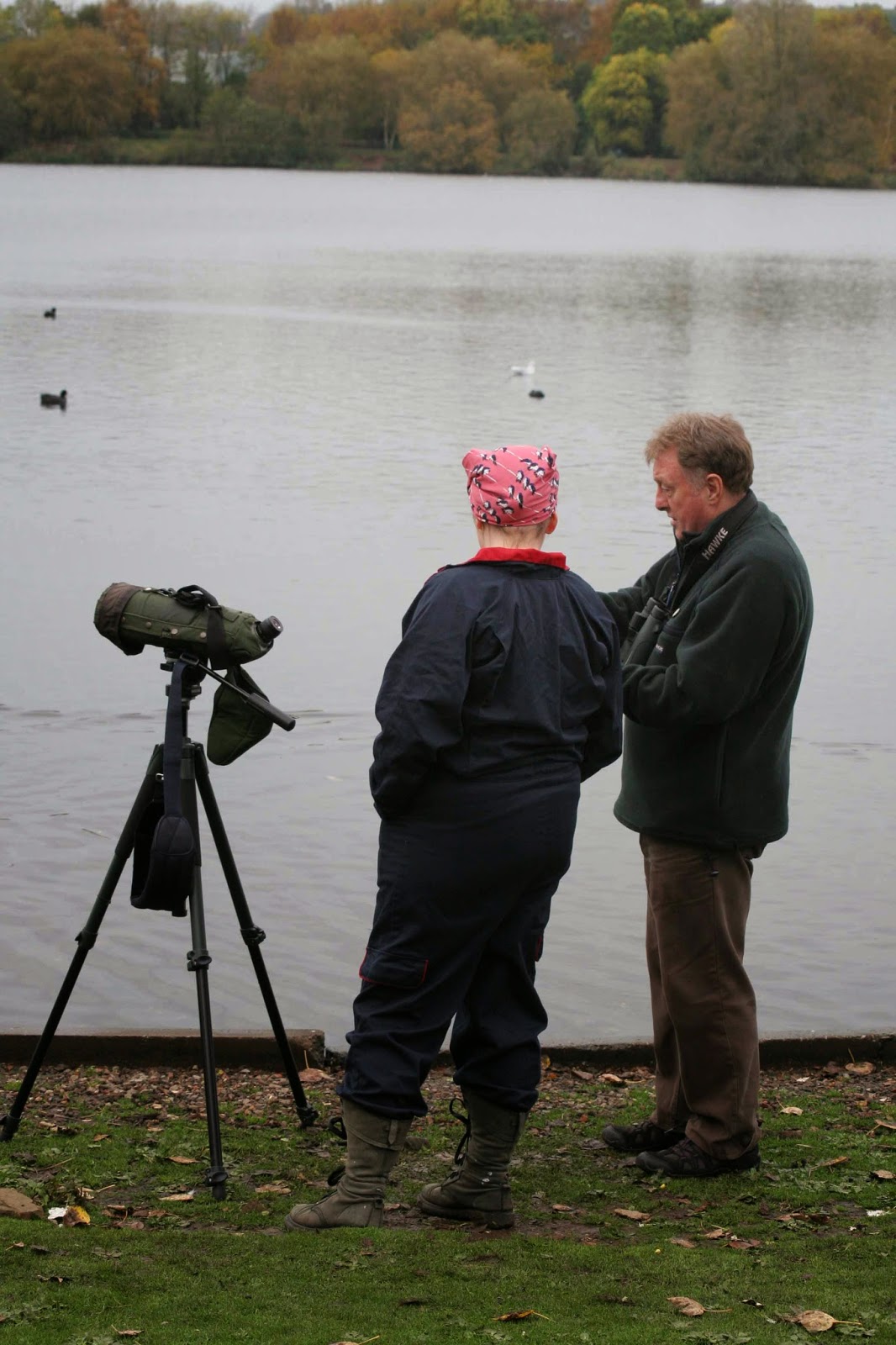 Phil set up the monocular by the lake so that visitors to the Bird Hide could also have a look at a wonderful and rare sight - a great spotted woodpecker that is seen at the lake daily. 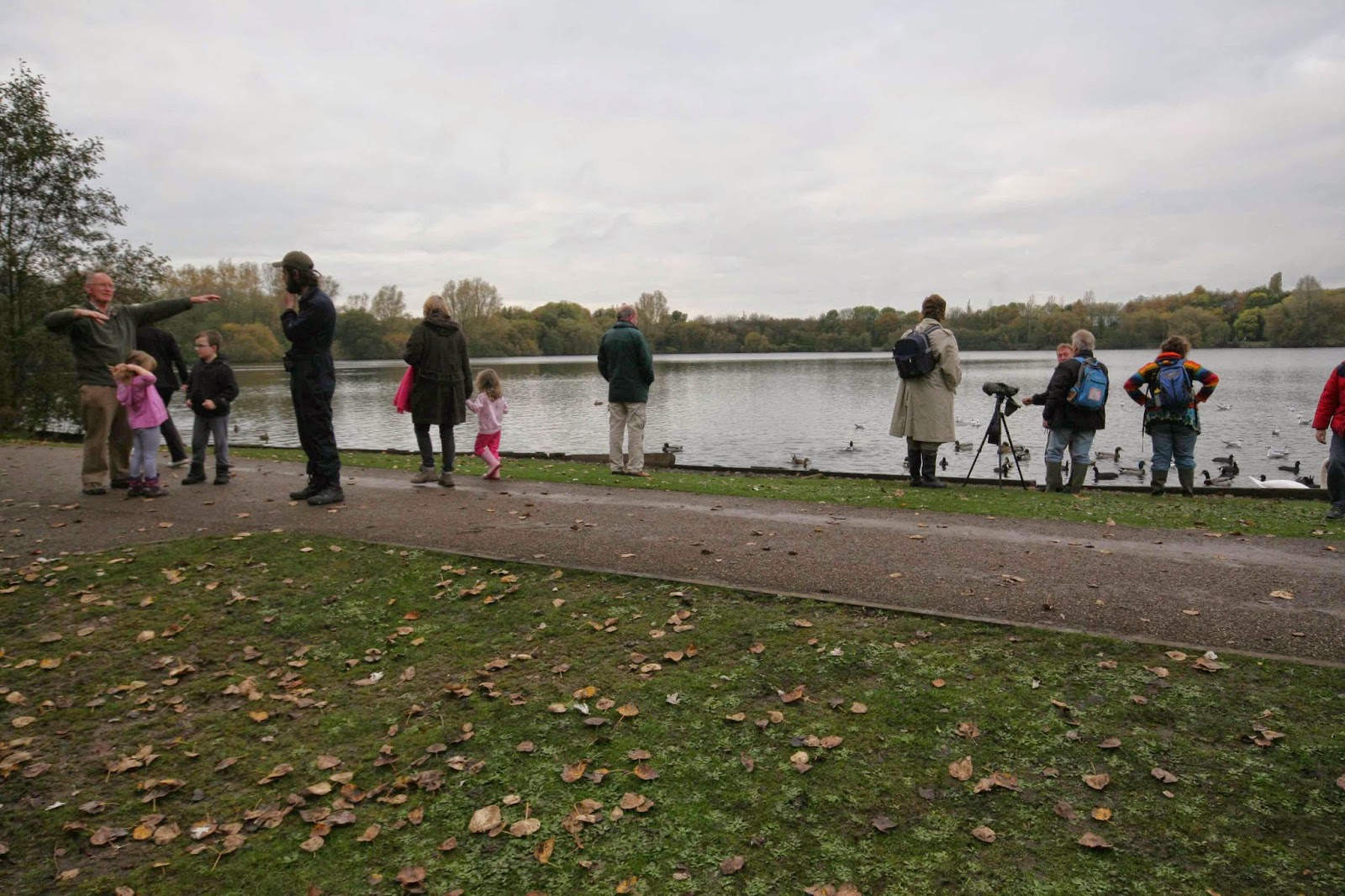 Through my binoculars all you could see of the woodpecker was this: 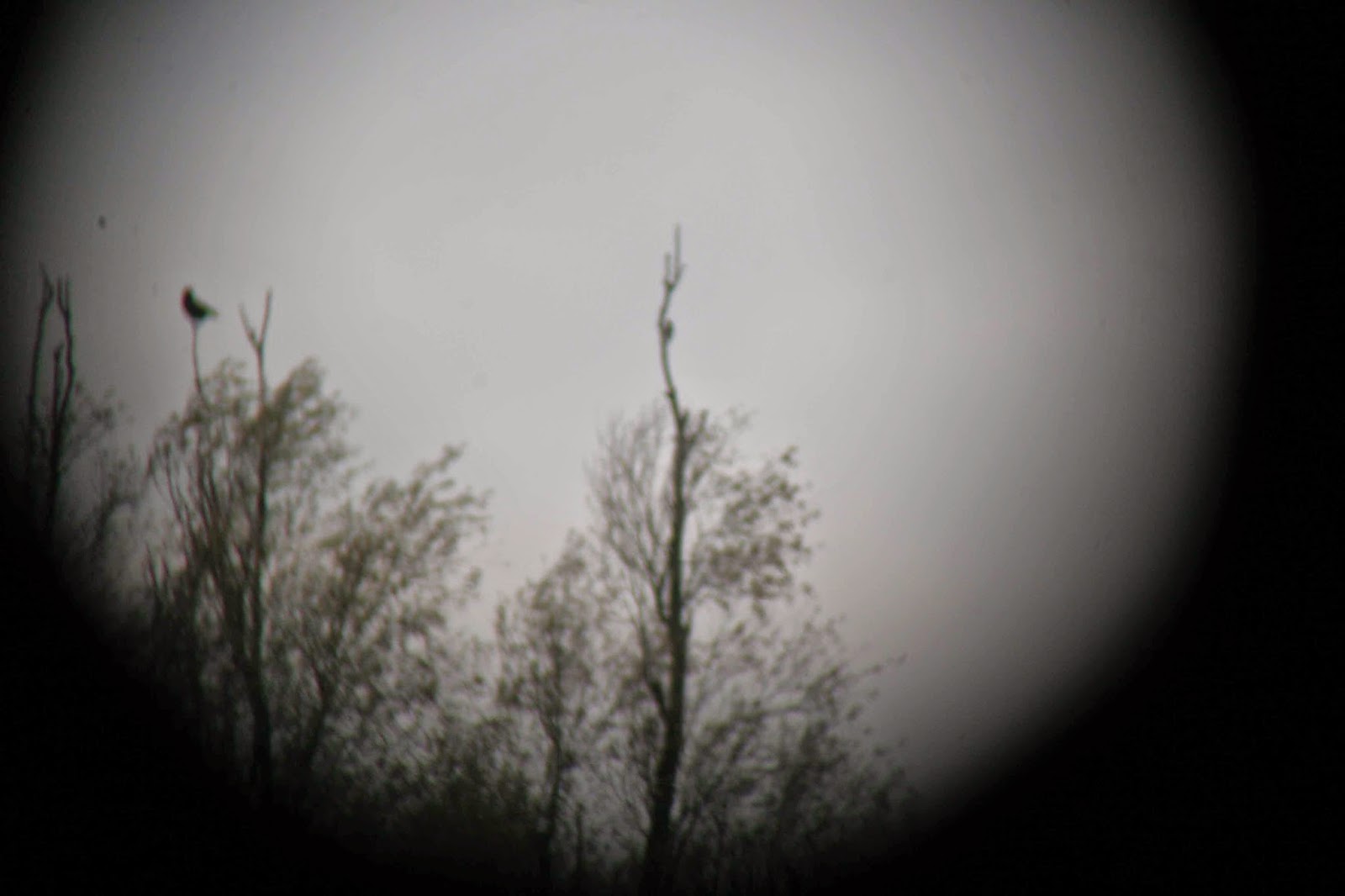 But through Phil's you could see very clearly. Although it was very hard to get a good shot through the lens! 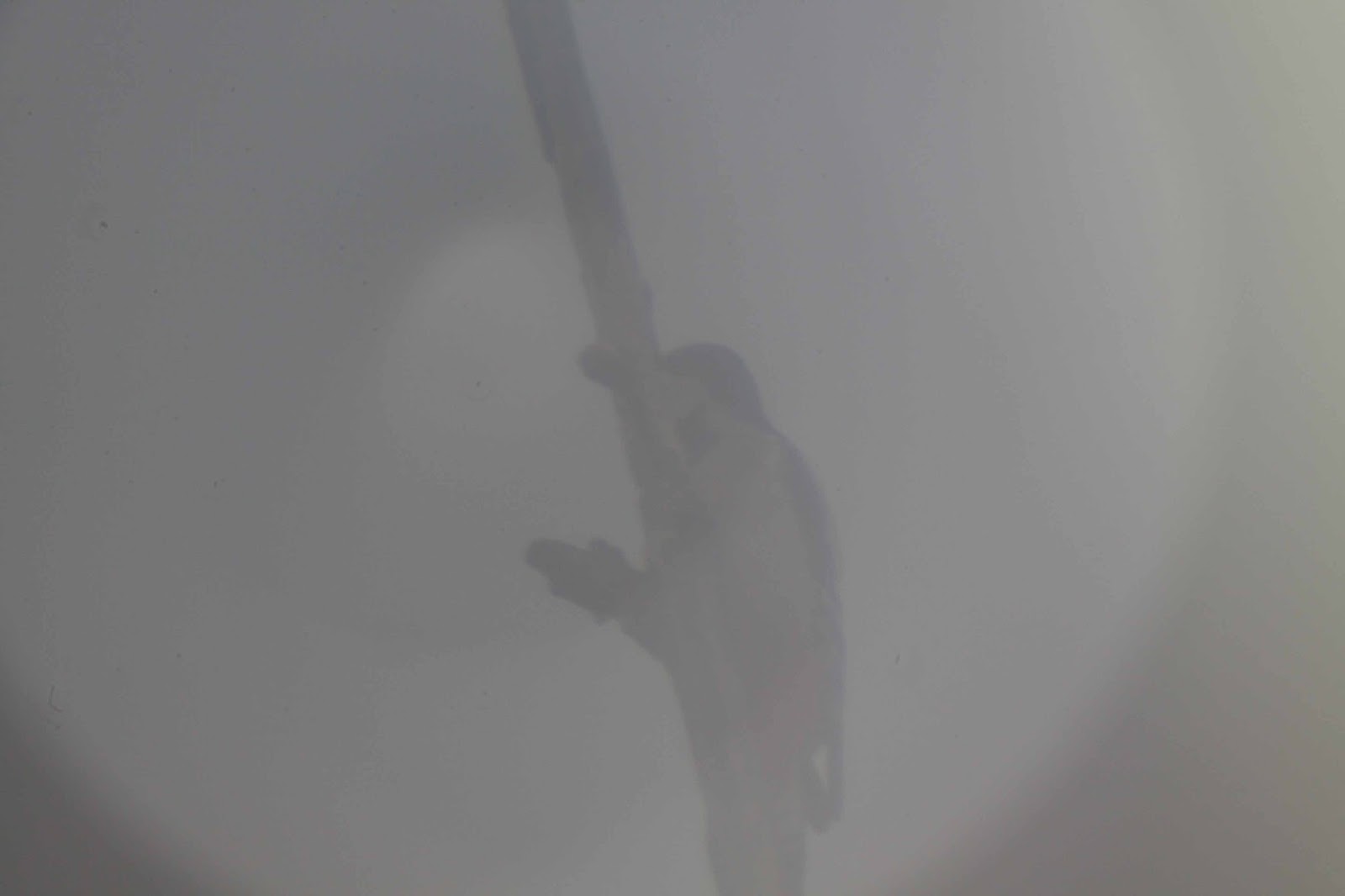 It certainly helped to bring a crowd, and Phil told us about his video works - documenting Staffordshire Birds.
Here is a wonderful video Phil made of another woodpecker.
It was great to meet Phil, another force for nature. Phil was pleased to hear that we have a great vantage point at the back of AirSpace Gallery of the Peregrine Falcoms that nest and rear young each spring and summer - and has arranged to come and visit the Bird Yarden, and make a video of the falcons. 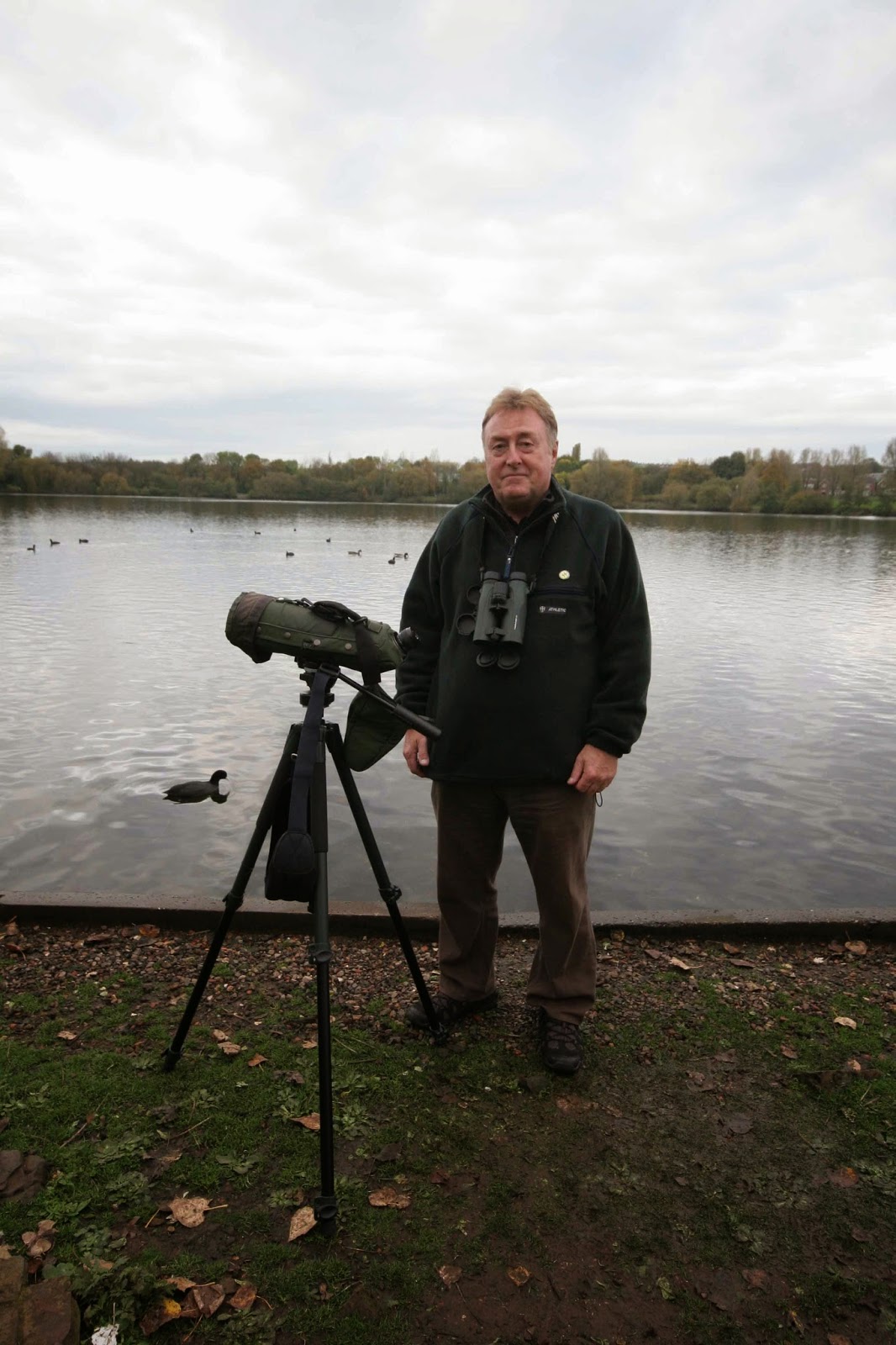 We saw a good number of birds at the lake, but by far the most exciting was the woodpecker! 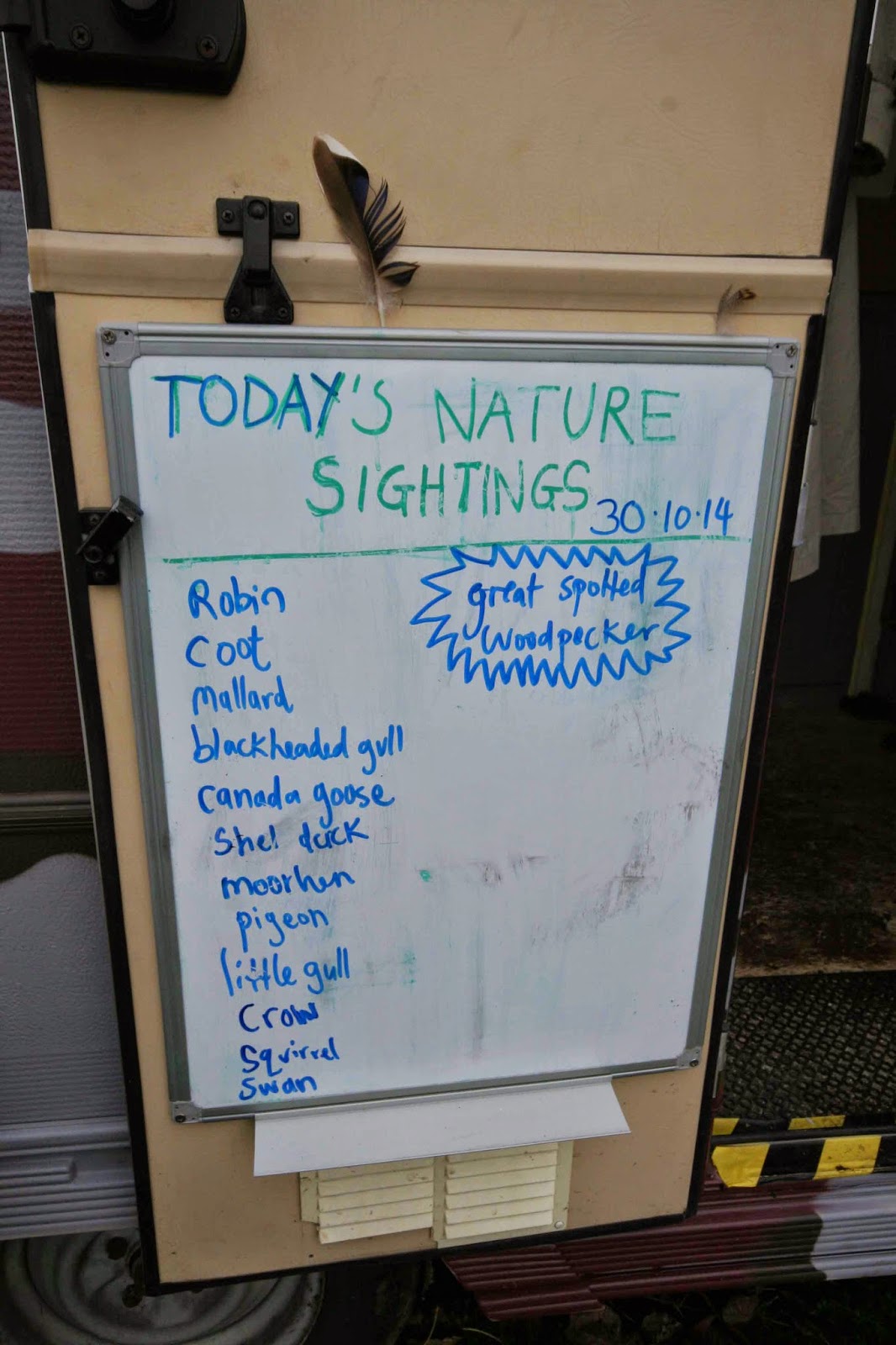 Our final Birder's Paradise event day was in Hanley Park.
We had discovered the amazing tree audit that was undertaken in the park last year - something that Tom Pine the parks liaison officer was keen to see used. We decided to select 10 of the most amazing trees in the nature reserve area of the park, and create a tree trail. 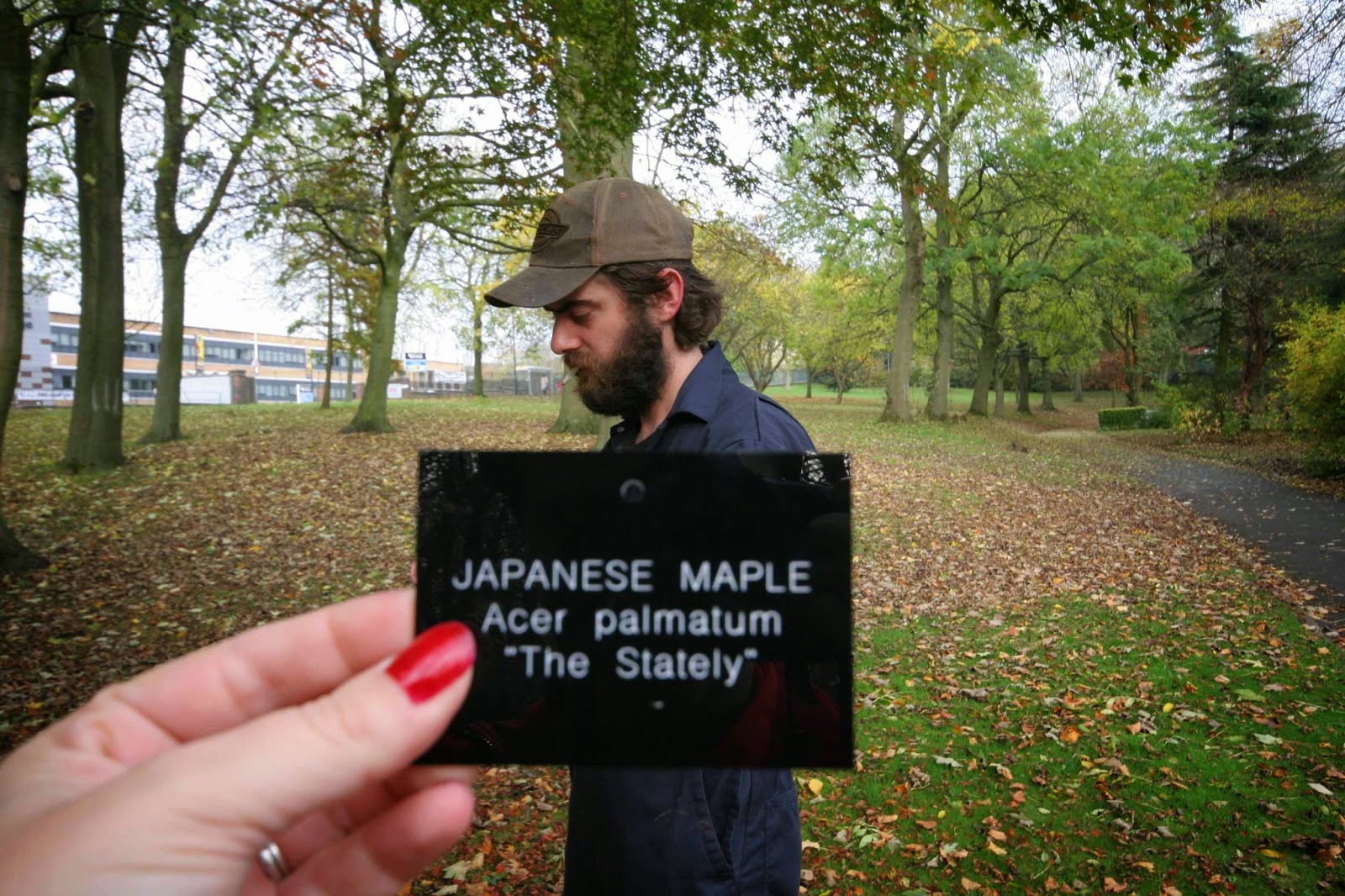 We contacted an arboretum who have tree plaques on all of their trees, and they agreed to make 10 tree plaques for us, and then we created a brochure.
First thing in the morning we went and installed the tree trail plaques on the ten chosen trees. 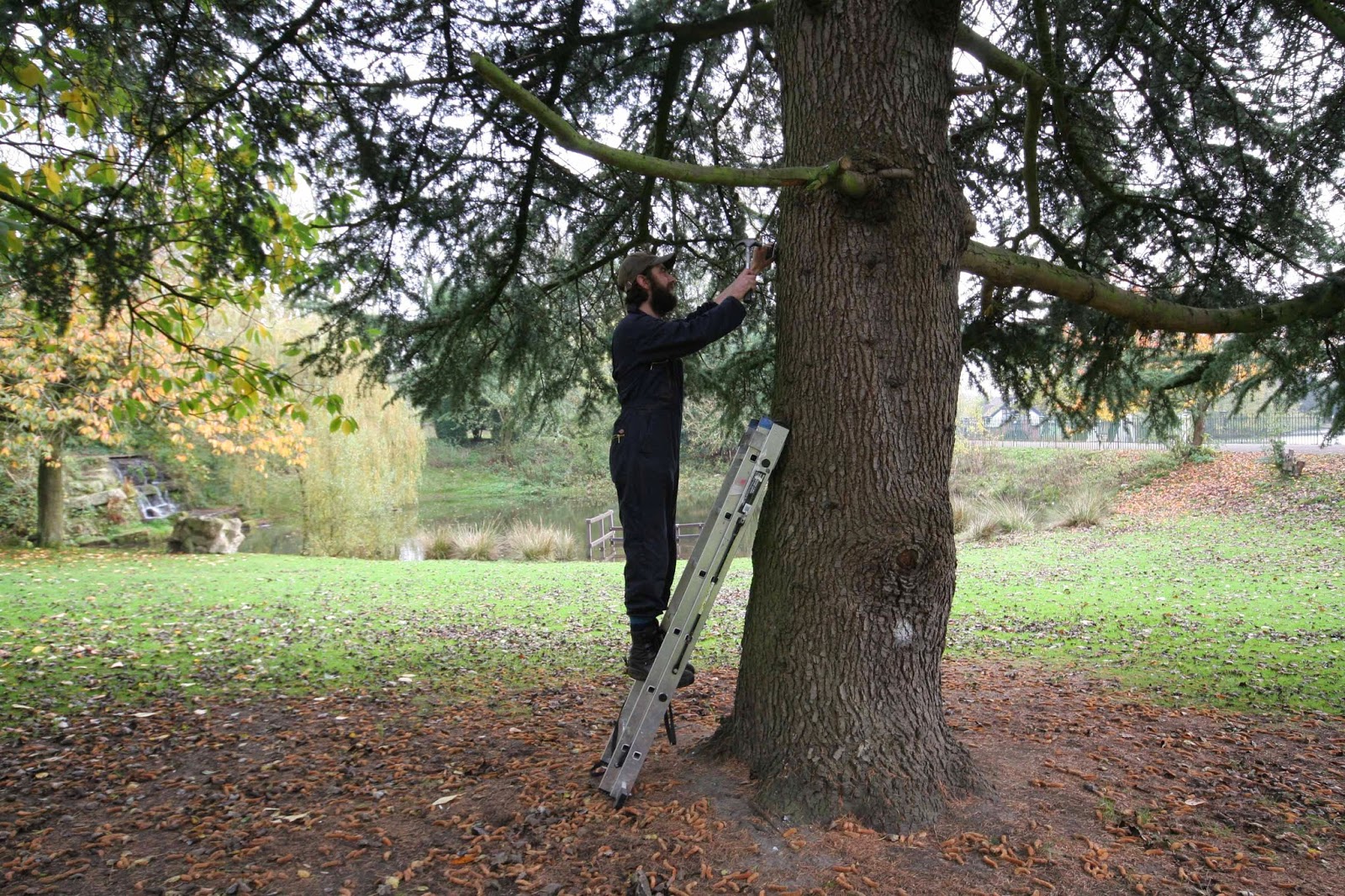 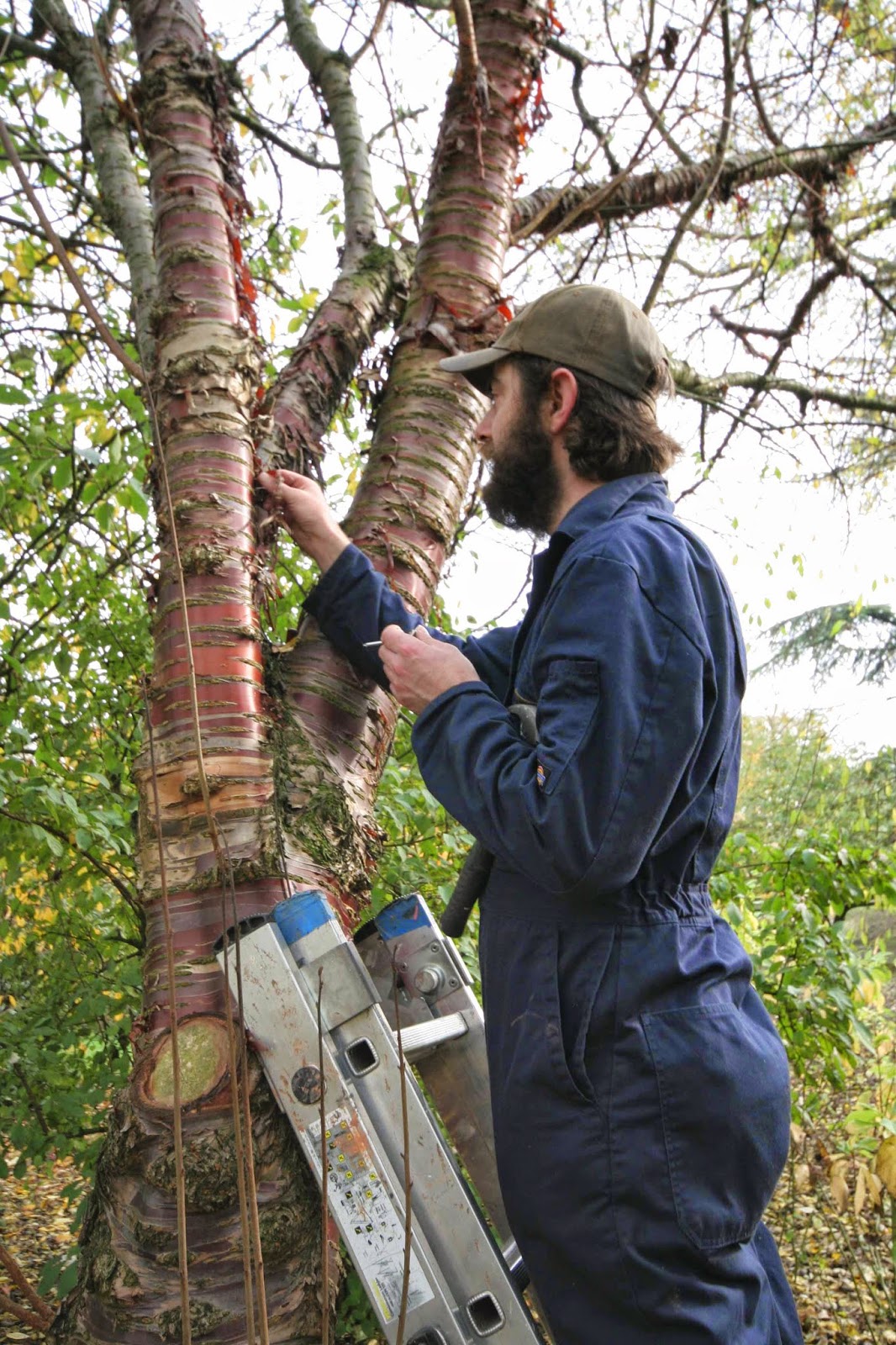 Then we got the Bird Hide set up for the day.
For our final event we had an extra birder with us - my sister Kerri Francis was there to help us speak to the public about nature in Hanley Park, and to tell them about the tree trail. People thought it was a great idea, and we hope the guide will be used for a while to come. Printed versions are available from staff in the park, or a downloadable version can be printed from here: Tree Guide. 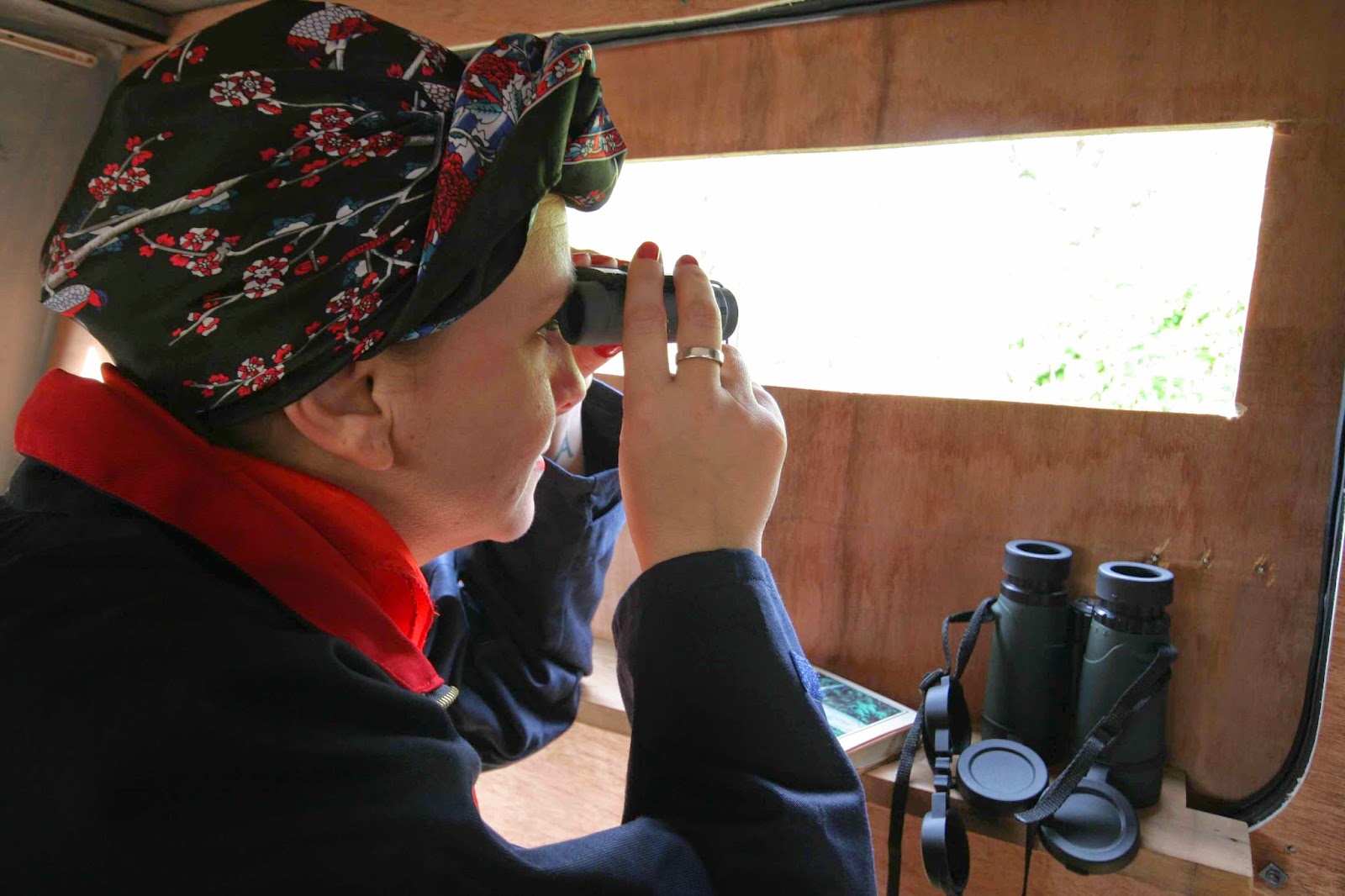 In total, during the Birder's Paradise project we spoke to around 176 people, and 162 took part in workshops and activities (not including the visitors to the Journey's Exhibition.)
For now the Birder's Paradise Bird Hide is hibernating, but we are thinking about what could happen next with the project and with the Bird Hide.
As a result of us spending more time in the park, we were able to develop the relationship with The Friends of Hanley Park, and are very pleased to be leading on a project to adopt an area if the nature reserve and work with Let's Make Jam, a modern W.I. group, and workers from Sainsbury's to develop a bee friendly garden. 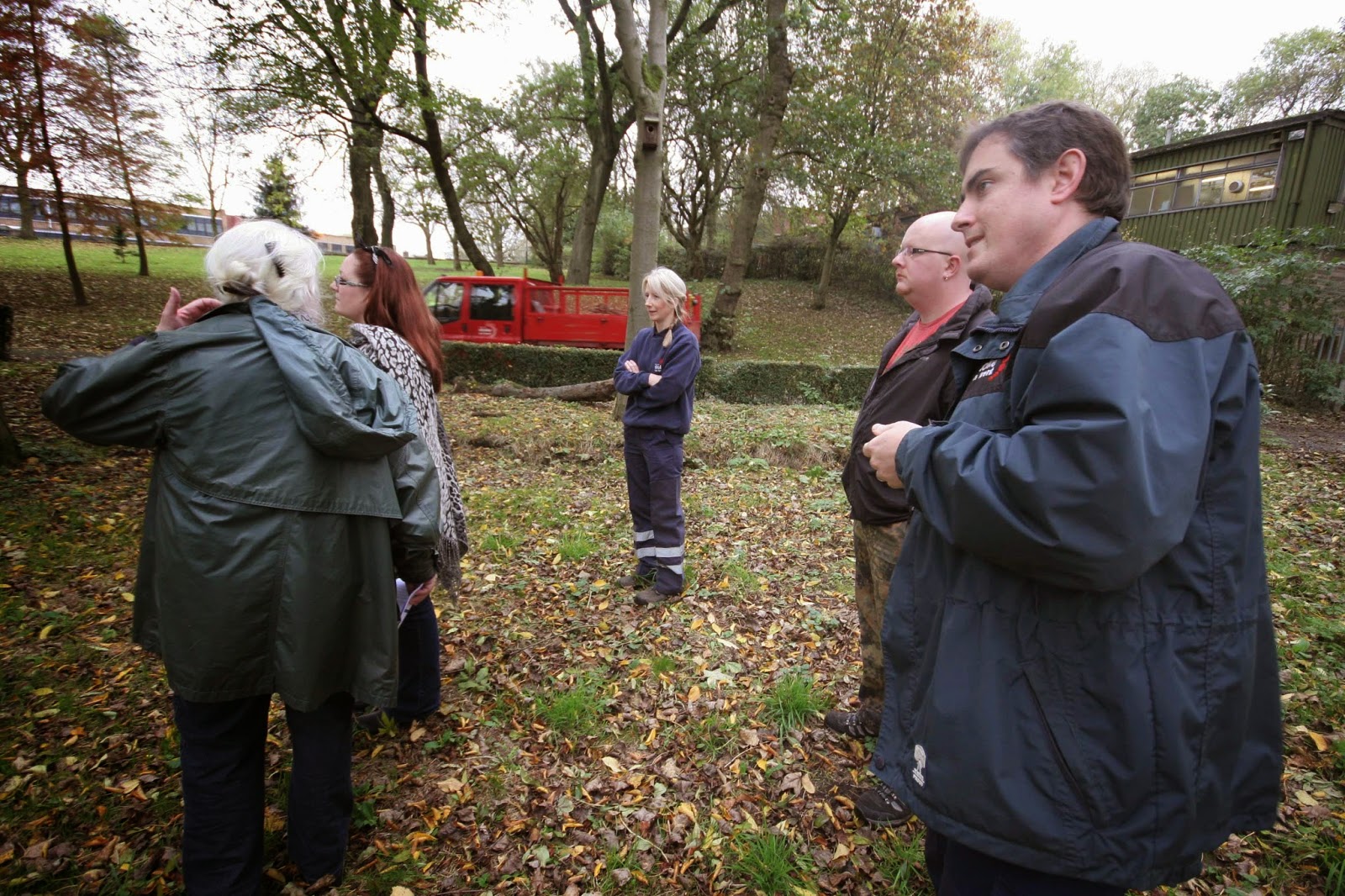 Here we are on a site visit to discuss plants and a design. We have secured £500 funding from the 1,000 Lives Community Champions Fund, to put towards a workshop and plants to help the project, and are now looking for other funding that can supplement the project. Watch this space... 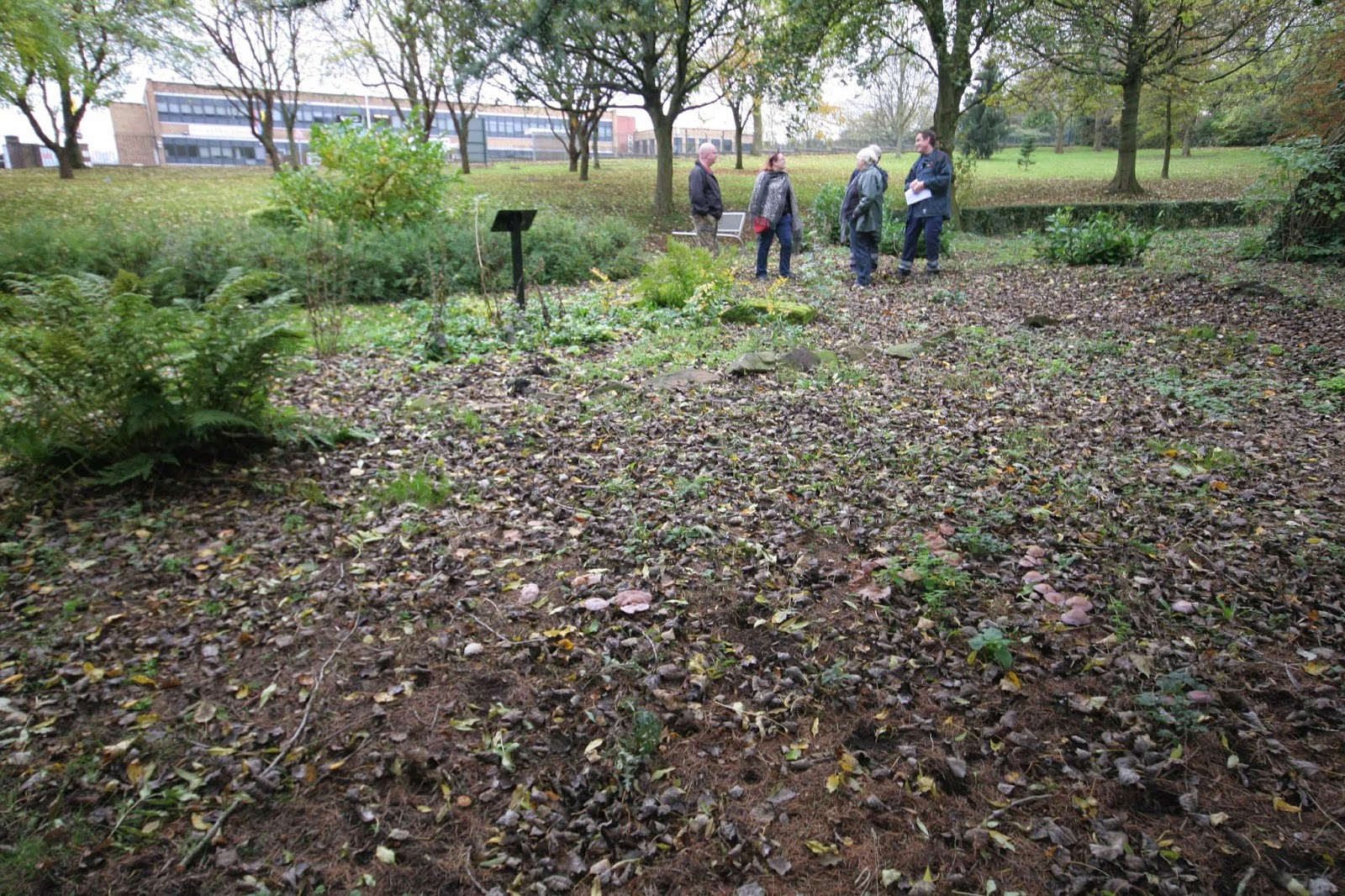 Birders Paradise would like to say an enormous THANK YOU to Appetite for believing in our project, and funding it to happen through The Kitchen Artists Support Programme.
Posted by Anna Francis at 7:38 PM