The AirSpace Gallery/British Ceramics Biennial 'Community Maker' Project continued with another workshop in our makeshift pop up community space (big tent) and a very special and enjoyable community meal. 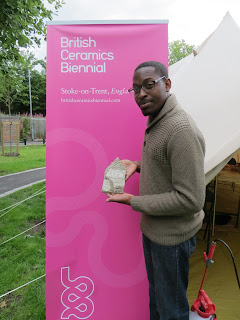 The workshop invited people to make themselves as a house - and it was really interesting to see how much detail people went into while making them. It was a lovely activity. 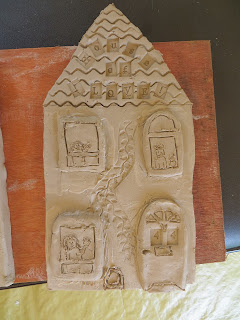 And started to really give people the opportunity to be creative with the clay, above is a lovely example by resident Kerry. 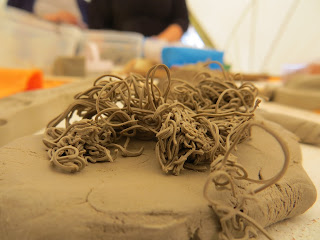 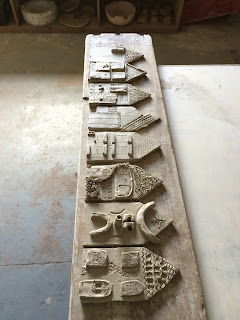 They asked us to ask the community about the idea of the council handing over one of the still derelict buildings on Portland Street - the old community shop - to be used as a community asset and to explore the potential interest in the idea of a community run shop and meeting space.
One of the main points about the area is that the lack of a community meeting space really stops a lot of community driven activity from being able to take place. Community Maker has been enabled by AirSpace Gallery's purchase of a large bell tent, but still - this is limited, as only really 10 people at most can fit inside the tent, and it is fine in summer, but not really viable for winter. 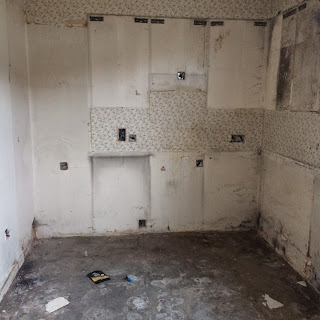 Therefore the idea of exploring the community shop and meeting space makes a lot of sense. 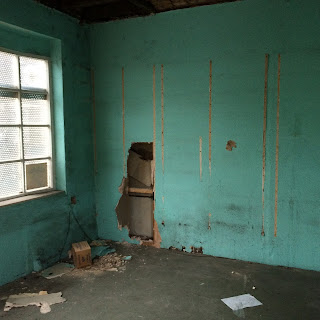 Ahead of the event we were given a look around the shop - and although it is a bit of a state, it is certainly possible to see the potential. 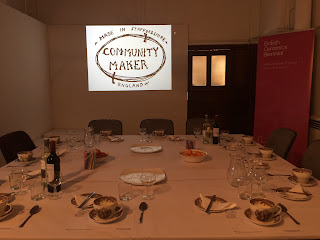 We used the special community meal to really focus on this idea, and create space for discussion about a community shop - how it may be run, what could be sold and offered there and who would get involved. I used the tried and tested artist soup kitchen format for the event - spending 30 minutes giving a presentation which presented a variety of community run shops from around the UK, and then we had our discussion over a bowl of tomato and red pepper soup. 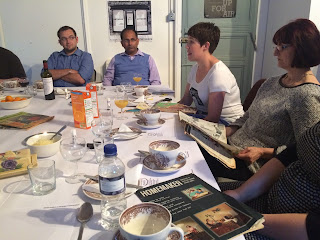 The residents gave their thoughts about the idea of a community shop and meeting space, and used 'The Homemaker' magazine as source material for individual collages showing what makes a strong community, here is one by Claire 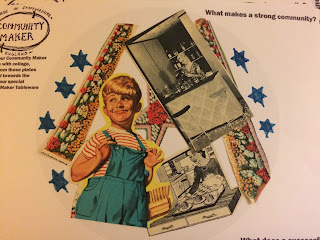 and at the end of the discussion everyone summed up their thinking with a one line response to give to the council:

- the shop could be a good place for IT classes
- What about the space above the shop being like a spare room, with bedroom for neighbours to use if they have guests staying.
-  people from local area selling stuff they make, also a place to buy oatcakes and coffee plus hosting events for local children
- whatever it is, it needs to be well run and inviting - good coffee and something to eat. somewhere that people know they can go and feel comfortable, meet neighbours. Place to book for parties, and access to space upstairs for the community.
- Somewhere to chill and also somewhere to pick up parcels - if you are out when they get delivered. Perhaps a homework/tutoring club for local children
- day care centre for children
- downstairs a shop somewhere to get fresh bread and cakes etc. and an upstairs space - somewhere to rent out for activities
- English classes
- a convenience store - food always works and also a police presence there too.
- CAB drop in for other stakeholders and service providers locally.
Since this event, the idea of a community space has been discussed further - and we were able to point out that though an excellent community asset, what the community really needs is a space where groups can meet. This has been taken on board and the council have now offered the larger empty space - the Pub on Portland Street, as a potential community space for a mixture of uses. 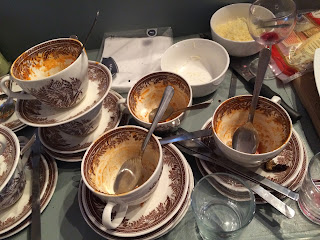 We had great feedback from residents about the event, people really enjoyed the special space created by the Artist Soup Kitchen, with one resident commenting on social media afterwards: 'An unusual and enjoyable meeting. I usually feel out of place at these types of things but not so much this evening. Thanks'
The next stage is to gather some support for the idea, resources and stakeholders. As a result of this I am going to Leeds, to a special training and networking day organised by The Plunkett foundation, an organisation who support communities to set up and run community shops, in order to learn a bit about the process and then return to the community to share the learning and explore the viability of the Pub as a Community Space. 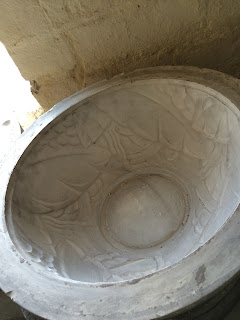 The final two Community workshops saw us making some lovely bowl and platter moulds from the Spode Factory mould store, which we hope (if they survive the kiln) can be used for future events, and in particular for the Community Feast Day, which will finish our series, at the Spode Factory in October. During these two events participants got stuck in to the most complicated ceramic making we did during the series, using moulds, which my brilliant assistant Alice Thatcher oversaw the use of. 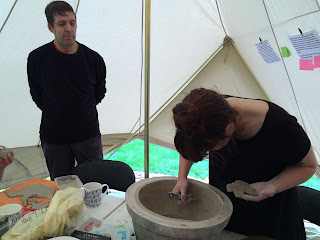 Such a lot was made in these sessions, a number of floral bowls, a six towns platter, and even an allotment! all designed and made by the community, and while making we also gathered ideas and support for the Community Celebration Event, our final event on the green space. 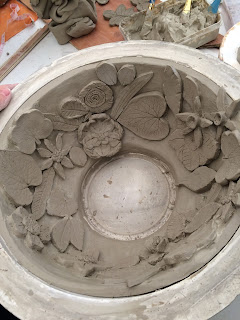 My favourite was the flower bowl, which I am really looking forward to seeing fired.
The final event within the Community was our celebration event, which throughout the events we have been talking to people about, gathering ideas and commitments of help from people, so when the 8th August came along, I was sure the event would be a group effort - which was really one of the aims of the Community Maker, to establish community celebrations and food sharing events for our area, where everyone can contribute.
I could not have wished for more from our event: 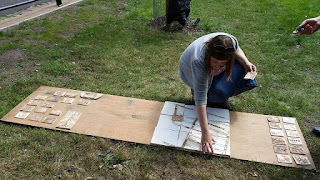 For the day we laid out some of the wares made during the project, for people to see, and we also set up an activity for people to create plant labels, with their wishes for the area marked onto them. 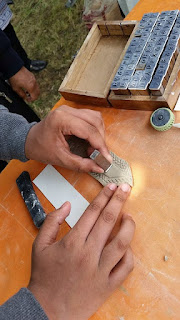 We had also had an idea to talk to more people about the shop idea, but it was so busy that there really wasn't time for this. 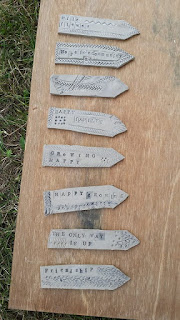 As well as making their plant tags, residents were also invited to help to sow a flower meadow - each resident was given a strip of the meadow-to-be to sow a wildflower seed mix onto, 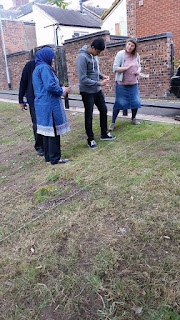 In exchange for their labour each resident was also given a sempervivum to take home. 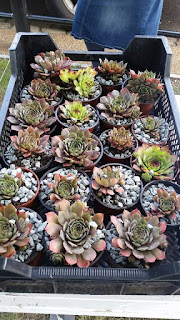 These were provided by Dawn from the landscaping team at the council, who kindly dropped them off during the week - for us to give out. 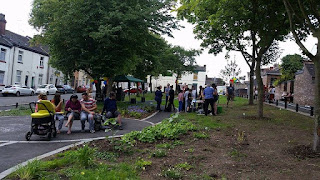 There were over 100 visitors to the event, and there was plenty of food to go around. One set of residents put on a barbecue, Ken brought his sound system and played some tunes, and Linda and her daughter transformed our Community Maker Tent into a pop up tea room, and provided cream teas for everyone (with cakes baked by lots of members of the community.) 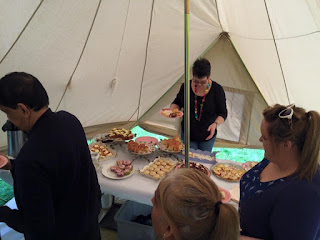 We were also joined by Zoe from the Mitchell Arts Centre, she kindly brought along her fantastic paint bike, and helped us to organise for a face painter to come along on the day too, which was brilliant and really meant there was something for everyone. 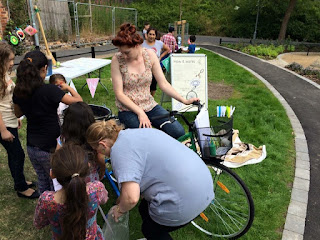 The event truly was a Community Celebration.
Our final event will be a Feast Day during the BCB festival - where we will invite residents to the Spode Factory to see what we made, and to talk about the successes of the project in the context of other Community Led projects from around the city - we will use the Artist Soup Kitchen format again, and I really hope some of the residents we have met during the project will be able to make it.
Tickets for the Feast Day can be found here.
Overall, what we have experienced during the project is a community that has had a hard time in the past, but who will get together and bring what they can to make things better. There are, as with all places, those that dissent from the sidelines, and those that do not want to get involved - but I feel strongly that the area is on the up, and that the project we have begun will, in some ways, be there to record the area as it changes for the better.
We have generated a lot of imagery over the weeks, and it will all go to inform the Community Maker design for the Community Ceramic Ware we will eventually make. What has been strange for me, as a practitioner who often works in communities, but never my own, the approach is very different, the investment and the fear too, are all greater.
Many thanks to all the residents for getting involved, and a special thanks to Alice Thatcher and Kornelia Herms for the amazing support throughout.
Posted by Anna Francis at 9:46 AM