Last week artist Katie Shipley and I were in Birmingham's East Handsworth/Lozells area for the research and development stage of the Beyond Bricks programme which we have been commissioned for.
"Beyond Bricks is a programme of temporary creative activities that provides opportunities for artists and residents to work together to respond to the social, economic and environmental changes taking place in Lozells and East Handsworth. The programme celebrates the culture and pride of local community, its heritage and its future."
The first day of the r and d process involved a walk through Lozells - though this was no ordinary walk, we were equipped with GPS systems and cameras, and were able to document our route this way. This was a very exciting and satisfying way of negotiating a new place, and something I hope to expand upon in future. Over the four days we met a number of really interesting people: We met the other artists and creative groups that have been commissioned, these include Geese Theatre, who have teamed up with community group Mothers In Pain - a group to support victims of gun and knife crime and their families, together they will be working to create an educational dvd that can inform young people about the realities of gun and knife crime, while offering alternatives. A recently formed group Aspire and Succeed have been commissioned to create a theatre production and dvd which documents the true Lozells and Easy Handsworth area - the group have proved to be very valuable to the project already; with their local knowledge and insight into the communities and their concerns. Birmingham based Rob Hewitt has been commissioned to provide a Community clean up service; offering to paint people's doors and window frames a selection of bright and beautiful colours; and then photographer Andrew Jackson will be stepping out of his comfort zone to work with people in the area to create personal 3 minutes documents of lives lived in the area. Finally music and sound group Sound It Out will be working with the people of the area to create a soundtrack to the area. As well as all of this Lead artist Simon Poulter will be creating a project, and helping all of us to carry out ours in the best possible way. One of Simon's main concerns is that we should try to secure a Beyond Bricks House, to use as our base, and to allow us to truly inhabit the place and understand it in a deeper way. This is something that Simon has done in the past: and perhaps aims to address the problem of artists parachuting into a place in order to carry out a project which delivers to a community, rather than working meaningfully with them. This concern feels like one of the main issues which arose for me from the R and D days. Going into a community to carry out a project with various groups, that asks that community to look at itself and think about the problems/issues and concerns around change, community cohesion and race relations should not be undertaken lightly. The main question which arose was that none but the Aspire and Succeed group, and Mothers In Pain are from the area; the rest of us are from elsewhere; it made us think about the relationships we have, or more accurately do not have with our neighbours and the communities where we live. This is something that I intend to consider further as the project progresses.

Katie and I have been commissioned to carry out a project called Give Me Your Hand. Here is the rationale and project details:


Our hands show our histories, give clues to our cultural origins, our ages and the way we are feeling. Hands are expressive and can be used to communicate. The project will build up a catalogue of the people of Lozells and ’s hands. They will be invited to work with their hands in various ways through the project; photographing their hands making gestures, making hand-prints in print and digital media and exploring what we can do and build with our hands through a series of workshops with groups in the area. At the same time we will discuss how the people of Lozells and feel about the place where they live, and about the opportunities represented by the changes that will be taking place in the near future. We will tap into peoples hopes and dream, aiming to raise aspirations by talking to people about what they would like to see happen, and giving them their say in the processes of change. We will aim to create a lasting document based on the people of and Lozells, and their dreams for the future which will be presented at sites across the area, and then ultimately will be presented publicly to the developers, becoming a useful tool, informing developers about what people want, think and feel. 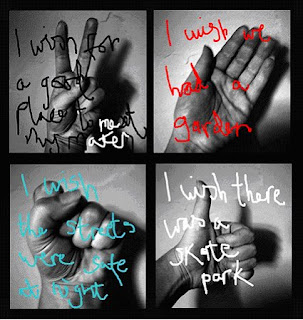 The programme is funded by arts council and urban living, and is administrated by Longhouse and Multistory, and we are really looking forward to getting started.
Posted by Anna Francis at 2:23 PM