Echoes From The Edge

On Saturday I visited the Friction Arts space in Digbeth to see their fantastic project 'Echoes From the Edge.' It is a fantastic multi-sensory experience, which unveils the history of the areas of Digbeth, Deritend and Highgate. The project responds to the developers very conscious use of industrial warehouse space as a buffer between an area undergoing a major gentrification process, and a highly populated, low-income area, under threat of clearance. I will not reveal too much of the experience, as a viewer discovering the secrets of the space, as you have to go there and see it for yourself. For this reason too I did not take any photographs of what happened, as Friction are keen for people to experience it first hand - if you like surprises, then make sure you get over there and see for yourself what Friction have achieved. 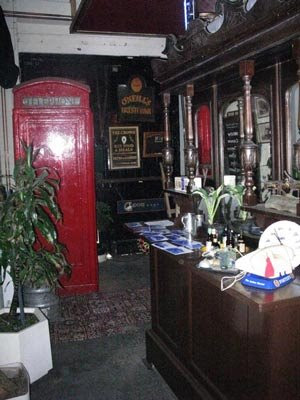 Echoes from the Edge - installation shot courtesy of Friction Arts.
Lee from Friction gave permission for me to use these images from their website, which show some of the constructed installation, but don't give too much away. 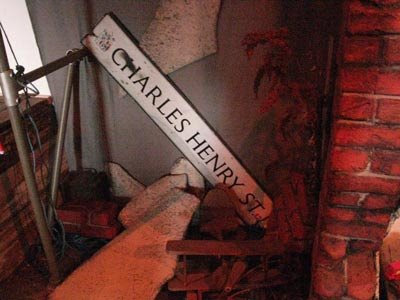 Echoes from the Edge - installation shot courtesy of Friction Arts.
After experiencing the exhibition the viewers all sat around the large table in the middle of the space to discuss with Lee and Harry (who was being Lee's assistant while Sandra was away) how it was for us, and also to ask any questions we might have. It was really interesting to hear how Sandra and Lee had set up the project. The process of working with the community had taken 18 months - the conversations which form the basis of the exhibition were not quick, cursory chats - but had been at least 4 hours each. I was interested to hear how the conversations had been instigated. 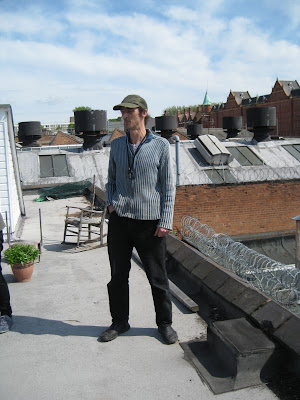 Lee on Friction's roof.
Lee explained it was just a case of hanging around a bit, and approaching people, but being open about what you are doing and why. The discussion also touched on the notion of exchange - and that the communities of Birmingham are fairly used to arts initiatives that happen for periods of time, which come in, consult them - do something with them, and then disappear. This, Lee said, causes a feeling of mistrust in some ways - which Friction had to work hard to break down. This certainly resonated with me. Lee said the idea of exchange is quite key to what they do, and that it is important it is not just one-sided, they therefore try to identify ways that they can aid the communities that they are working with, while carrying out the conversations that they wanted for their own purposes. This exchange might involve equipping groups with skills, or even the loan of equipment for a project. This is an interesting concept, not simply feeling that the community should be grateful that we (artists) are working with them, and that that should be enough of an exchange. 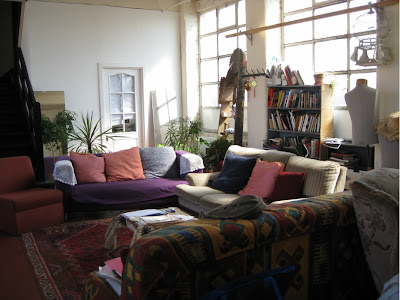 Upstairs at the Edge.
I also put the question to Lee about what it means to be working with the community where you live, and whether that was something that was an issue for them - as this has been on my mind lately (since Beyond Bricks.) Lee offered some interesting insights here too, saying that though they live nearby, they are careful not to work with people on their doorstep. This is a conscious decision, as he said, often the people you are working with may need quite a lot from you - and some distance for your own mind is necessary - so you can go home and close the front door, and not be working out of your own living room. The Edge's situation is, I thought a really good middle ground though (Lee and Harry took us on a tour of the space once the show was over.) The space itself is really comfortable, and just like a living room anyway, but with the benefits of not being your home. 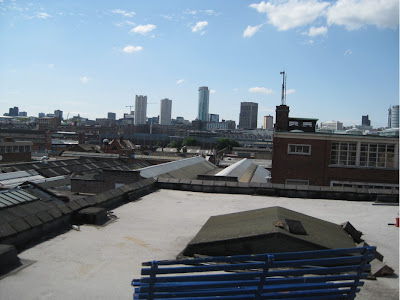 Another view from the Edge roof, looking across to the centre.
After we had had a good look round Harry took us to the Anchor - which is Friction's second home, and the location for the Eccentric Auctions which harry and Simon put on every now and again to raise money for the printing of the Eccentric City newspaper. 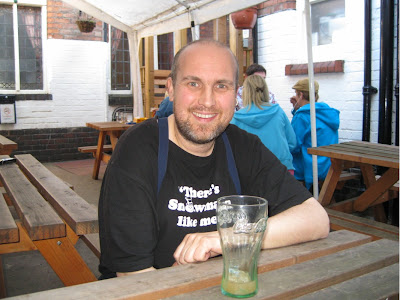 Harry Palmer of the Eccentric City
We had a nice pint and a conversation about artists and writers working in prisons, which is something I am really interested in. Harry has been doing a residency at HMP Frankland.
Thanks to Lee and Harry for welcoming us to the Edge, we had a really great afternoon.
Posted by Anna Francis at 1:58 PM