The Winner Takes it All? Book Surprise! 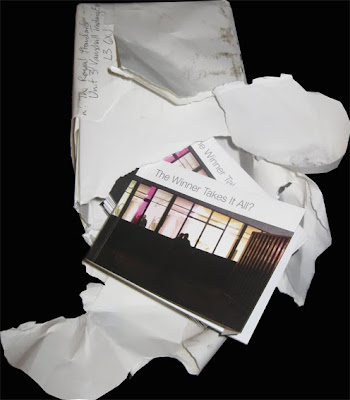 Today I received a very exciting, unexpected surprise package in the post...It held 30 copies of the book to document 'The Winner Takes It All?'
'The Winner...' was an event which I was lucky enough to be selected to attend, which took place in Liverpool during 2008 Capital of Culture year. It offered an opportunity for artists from across the UK to visit and explore the city, and question, discuss and debate issues arising from the cities status as capital of culture - and opening the wider debate over cultural led urban regeneration.
It was an amazing opportunity, and one that I am still thinking about more than a year later. CLICK HERE to read my original documentation of the event, which has been quoted in the book!
I am particularly pleased to receive the copies of the book as one of my photographs has been used as the front cover. The book is a document of some of the discussions which took place during the weekend, and an exploration of the context and intentions and purpose of events like this by James Buso (project manager for The Winner) plus a really interesting essay by Penny Whitehead on 'legacy,' and an article by Glasgow based artist Janie Nicholl, which sets Liverpool's award in context, through a discussion of Glasgow's previous experience of the same award.
I find the debates particularly interesting, after the articles in Stoke's local paper suggesting we should get the award.
A big thank you to all of the Liverpool artists for hosting the event, and an even bigger one to Jim, for documenting the event in this way - ensuring that these important discussions are recorded and distributed.
Posted by Anna Francis at 6:13 PM