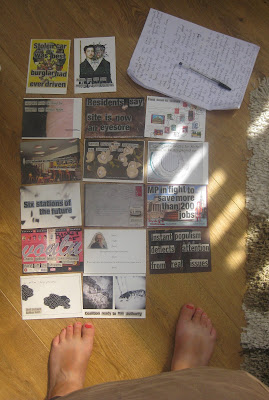 Yesterday I finally got my Paris Correspondence School Postcards in the Post. Click here for previous post about this project.
The postcards went all the way from Stoke, to Shell Island and Back and then up to Yorkshire where they were finally posted (well somewhere on the way back anyway.)

I decided to focus on this aspect of postcards when making my changes to the originals. The way that when you go on holiday you might send people a postcard home, but the place is generally not that fascinating for the recipient, if the postcards gets there at all - or it might be that you buy the postcards but never get around to sending them, I have done that a number of times. 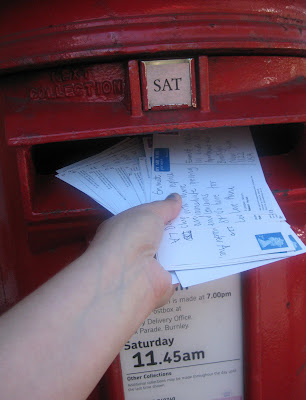 I had meant to make changes to the originals while on holiday, camping in North Wales, but the weather (rain and wind) somehow was not conducive to such an activity, so I ended up bringing them back to Stoke again. I wanted to talk about this somehow, and also about holidays being an escape from the everyday.

I decided to doctor the postcards by putting 'headlines' from the local Stokie paper on the cards, and a message about my failures on holiday, and then send the cards back to their original designers.

They then went in the post, and I look forward to hearing from anyone who receives their card over the next few days.

Meanwhile, I have now received 7 postcards from strangers, and am rather enjoying them coming. I have also persuaded artists Andrew Branscombe, Michael Branthwaite, Glen Stoker and Bernard Charnley to join the project by sending postcards to Charlie Levine (project initiator) at her Paris address.

They will eventually end up in two exhibitions in London and Birmingham.

I rather enjoy doing mini-projects like this. Fun, engaging, and a way of connecting with others.
Posted by Anna Francis at 9:12 PM