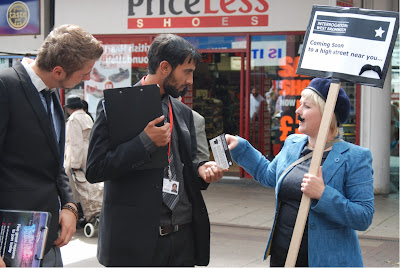 This year's interrogation may be much more challenging in many ways for the artists undertaking the missions.
Although last year our target zone was within the public realm, the space which was being interrogated was purposefully directly outside of the New Art Gallery Walsall, and therefore in many ways was immediately identifiable as an art space. We were outside, but in many ways we were protected by the shadow of the building.
This year we will be working in a very public public space. We will not be affiliated to an art space (though of course there is one in West Brom - The Public) and our investigations will actually be taking place on the high street. In addition to this the High Street in question seems to be in great need of an intervention. There are regen programs underway in the town, and it will be interesting for the project to in some way consider how the changes are going, and to speak to the public about the Town, what it used to be like, what it's like now, and what might help to make it better. 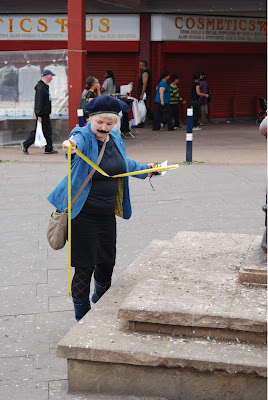 On our last visit we walked around the target zone with a golf-sale-style sign, saying Interrogation: West Bromwich - Coming soon to a high street near you, and wearing our uniforms. We just walked around and handed out flyers, and conversations with the public did not really get going. 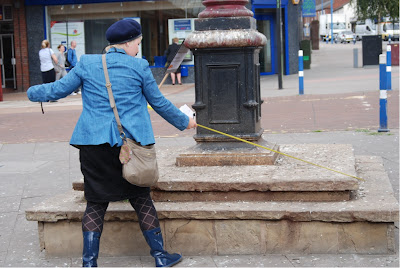 We decided today to try to measure the public reaction to us - and thought the best way to do that would be by measuring the clock tower at the end of the high street, and see how people might respond. 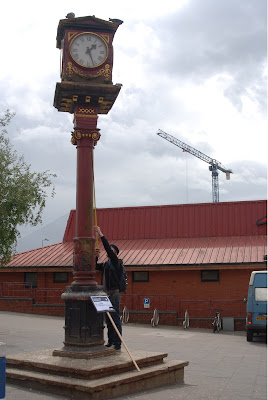 We walked from the Multistory offices, giving out flyers on the way. Agent Orange commented that he felt the atmosphere today was less 'baffled curiosity' (as it was last time and a little bit more antagonistic. 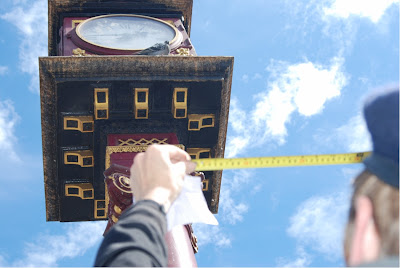 We did have some calls of Naziism! and 'What the f*%! are you doing?' which were met with a smile and the offer of a postcard explaining a bit about the project. 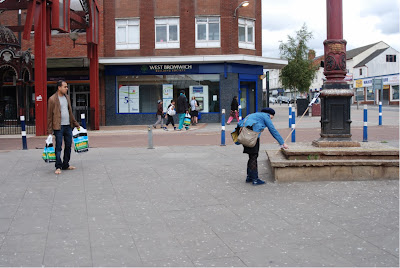 One man refused the postcard I offered him saying 'No way, I hate anything to do with the French'. We had some extended conversations regarding the safe and no-go areas of West Brom from a friendly bloke called Candy (a self proclaimed local music star). 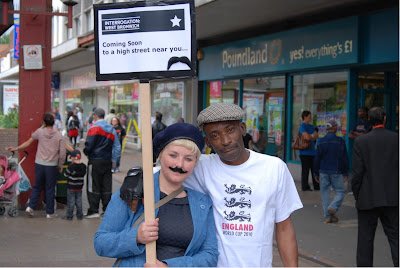 He told us that the market part of the high street is safe, that wearing the uniforms here and carrying out the project is fine in daytime, but that if we go up towards the bus station direction and beyond that it is dangerous - that someone was shot outside the chicken shop, lots of times, and now no one hangs around there at night - that we should avoid that area after 7pm, and that Caucasians hang out there, but they are on drugs and are dangerous. 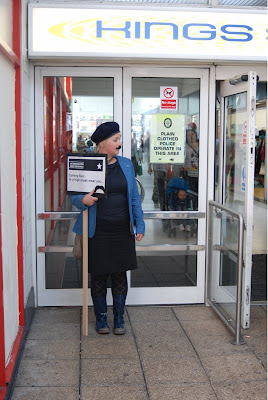 He said that if you go in the opposite direction (towards the Fox and Hounds and beyond) that it is more cosmopolitan (as it is towards the big city -Birmingham) but that it too could be dangerous - people might look at our moustaches and assume we are undercover policemen and that might be bad news for us. He said all of this several times, and in all seriousness. He told us that we should not get our cameras out down there and someone would try to steal our sign. 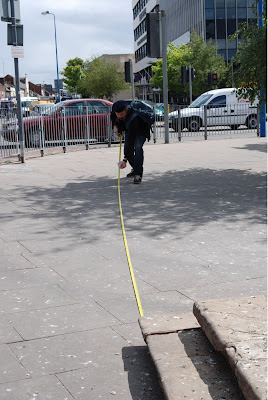 We met two blokes who had grown up in West Brom and had gone to the grammar school in the 50's and 60's. One of them had become a lawyer and one a doctor, and now lived elsewhere, they said they hadn't been back for a long time, and hadn't seen the high street for decades - they said they were shocked and that it felt like Baghdad. 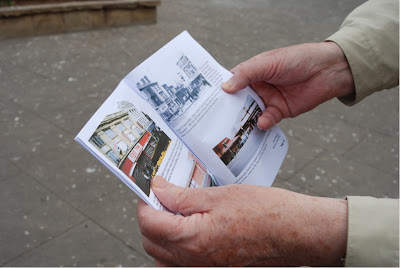 They said they were quite shocked at the decline, and showed me a journal they were referring to called the Throstle's Chronicle - a booklet about how things in the area have changed. It looked really interesting.
We met another guy who said that the town today is 'SHIT!' and that this is because of all the foreigners who come over and steal all our jobs, and that West Bromwich is full of foreigners who and none of them work. 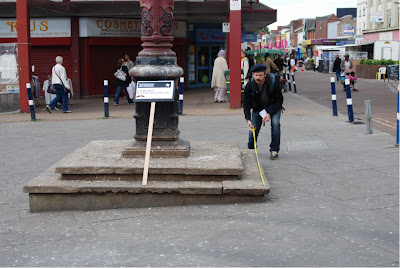 Another man asked us where we were from, and we told him Stoke, he told us that there are loads of racist people in Stoke, but that it is not like that in West Bromwich - he said people aren't racist - but people don't like those that do not contribute.
We had another look at the space in Queens Square, and had to explain ourselves to the security guard.
One of the differences this year in my role is that I will be focusing more on evaluating the project. I am currently working on ways to engage the public in the Interrogation programme, asking their opinion and gathering their comments. I have decided to do a different mini evaluation each week - using different participatory appraisal techniques each time. This is something we are pleased to implement this year, as we were unable to gather the public's response last time. It will also mean that my role will be to act as a bit of a gateway between the public and the agent artists - acting as someone to ask about the project. This seems even more important this year, in particular in relation to the earlier point about the 'relatively unprotected' context which we will be working within.
The first Interrogation Mission takes place in 3 weeks time, which is very exciting, but of course nervewracking at the same time. We return to the town in two weeks to start setting up the Interrogation Room, and to carry out another mini intervention. We hope that by the time the first mission starts the idea of moustachio'd agents might be in some people's minds - and may mean the public might be a bit more willing to engage with the artists.
Posted by Anna Francis at 5:26 PM