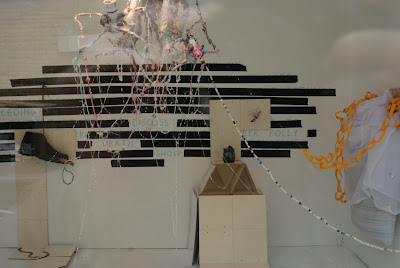 This is my first London exhibition - and I was really pleased that curator Simon Lewandowski invited me to be involved.
The curatorial project is in 8 chapters - plus a preface and an afterword.
Each week a different artist has been invited to take over the 24/7 space at Gooden Gallery, Vyner Street. There are rules which must be followed - you can add things, but not take anything away. Each chapter should respond to the previous one.
I was randomly given chapter 6.
Two pieces of writing were given by way of an explanation: one was Italo Calvino’s ‘If On A Winter’s Night A Traveller’ - which is a book made up of ten unrelated chapters taken from various books and put together forming an unlikely narrative - and the other an extract from Jonathan Swift's 'Gulliver's Travels'

Before going I started reading Gulliver's Travels in case that may help - and I also paid close attention to the website to see what each other artist did in the preceding weeks.
I felt that a visual response might be required - which is something I am particularly bad at - associating notions of aesthetic with decoration.
The space looked like it was getting fuller and fuller each week - but I also felt that I would have to wait until I was confronted with the physical space before deciding what I might do, to some extent. I did wish to explore the idea that as artists we are often mistaken for 'window dressers' - and decorators. I was worried that my response might look like this - so decided to directly confront that.
Recently two things have been levelled at me which have made me think: one involved a discussion over a commission which a council wish to make for an artist to decorate some new toilets - I felt strongly that artists should not be commissioned to decorate toilets - but rather perhaps to design a concept for the toilets (being involved in the beginning, rather than as an afterthought at the end.)
The second thing that has bothered me was in regards to being described as a social activist - and being asked if I felt my practice in some way responds to a need. This is also something which I feel uncomfortable about - and wish to explore further. 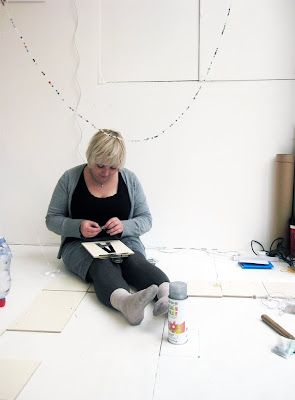 I am pleased that I was able to incorporate these thoughts into the window piece - the previous weeks artists had used diamante rhinestones and glitter perhaps to make the place look cheerful and sparkly - which certainly upholds the idea of making things look nice. I brought similar along with me.
When we actually arrived at the space Simon was there to meet us. I was surprised by the way the window space and everything in it had looked deceptively different on photographs. 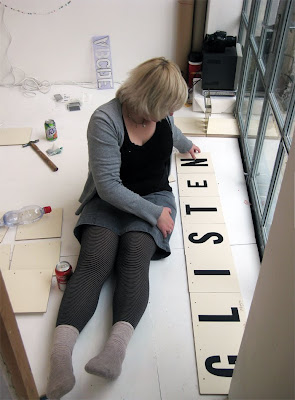 The other thing that surprised me was my own reaction to the space. I had originally intended to almost move everything aside in the space - creating a pile of stuff and effectively getting back to a blank canvas - but once there and confronted with the work of other artists I suddenly felt unable to be so ruthless. 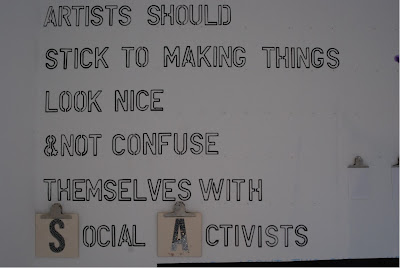 Instead I decorated what had been there before with glitter spray, rhinestones and bunting- and worked within the gaps that were still remaining - writing a statement on the wall about social activism, and finishing decorating a letter A which someone else had started previously. 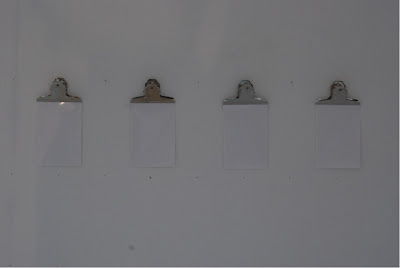 I also placed some blank pages on the wall - waiting for the next part of the conversation. I hope someone might do something with them. 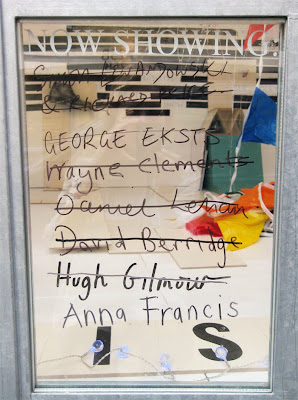 The bunting worked well - and I think suggests 'community minded artwork' well. Perhaps talking about celebration and events. I will be interested to see what happens next week - I wonder if they will take a more ruthless approach - it seems like they must do something drastic as the space is pretty full now. The strange glittery pink chandelier in the middle takes quite a bit of the attention - and the Gooden Gallery curator mentioned to me at the end of the day when I was finished that I could have moved it - or destroyed it - perhaps suggesting that they wished I had!
AFTER: 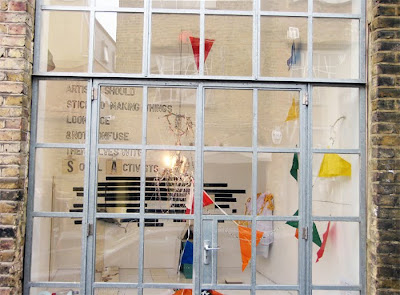 I rather enjoyed the problem of what to do when confronted by the space - and needing to respond quickly - in particular since I am so bad at making things look nice. I don't think that in the end I succeeded in making the space look nice at all.
Everyone at the Gallery was really friendly and welcoming - and also I am really pleased that the show has been voted in the Top 5 on Time Out's First Thursday - so hopefully will get quite a few visitors this week!
Posted by Anna Francis at 3:43 PM