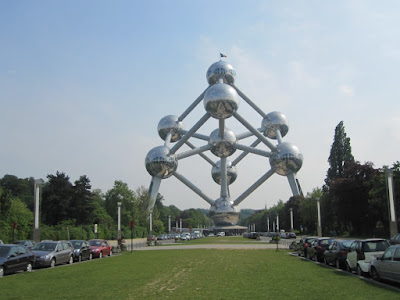 Last month myself and Glen Stoker headed across to Brussels to take part in the Trajector Art Fair, an exciting event held in the luxurious Hotel Bloom! which is due to coincide with the larger Brussels Art Fair. We had been invited by Nathaniel Pitt and Paul Johnson (Various Artist) who had secured one of the hotel rooms in order to represent the work of a selection of artists. They invited us, as well as some of the other AirSpace studio artists as a follow up to the Motel Kandinski performance at Conjunction '10 Live Art Day. I decided to 'represent' my own selection of artists, through a curated collection of artworks all made in response to the Hotel Multiple. I was interested in looking at and playing with the idea of the art fair, and the way that galleries represent artists' works. I did this through a performance called 'Room Service.' I gave the studio artists at AirSpace the brief and they made small multiples in response, and the idea was that I would be a chamber maid - and the artworks that I would be showing would be housed inside a serving cloche. 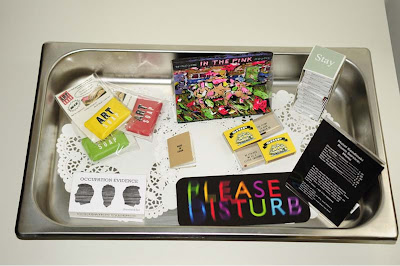 I wanted to distribute menu cards to all of the bedrooms in Hotel Bloom! Guests at the hotel would be able to call up and I would attend them in their rooms, with my tray of artworks, where I would deliver carefully prepared information about each of the pieces and the artists that made them. Unfortunately when I arrived at Hotel Bloom! and introduced myself to the art fair organisers they were not happy to allow the performance to go ahead - presumably feeling that it was too risky, and might not fit in with the Trajector or Hotel Bloom! image. So all the cards I had printed up were wasted. Speaking to Nat and Paul about it I decided to simply do the performance for a set amount of time in the Hotel Room, where Nat Pitt was showing works by 5 artists that he had selected. It was decided that it would be best to do this on Saturday afternoon. 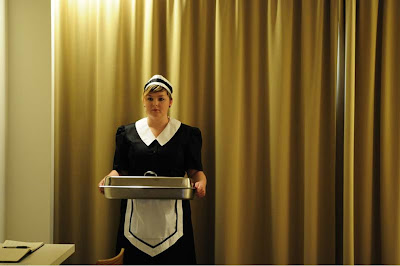 In many ways, the Hotel's refusal to allow me to do the performance affected my approach, and I felt almost as though I should not really have been at the fair at all. This lead me to change my approach, and to just stand very still in the corner of the room, and to only interact with the 'Guests' once they had interacted with me. 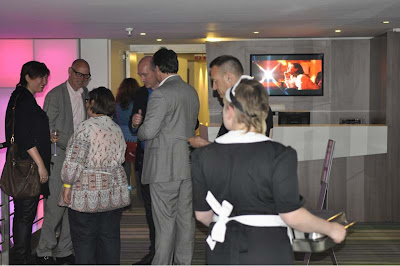 This, I felt was actually quite appropriate, as a good Chamber Maid is one that is almost invisible, inconspicuous. As I moved through the hotel towards the room, people didn't even really notice me. 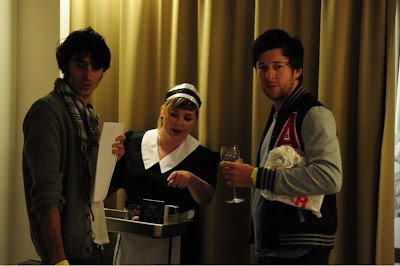 The response from the viewing public was very positive. I believe that I was the only person at the fair doing something performative, and the human nature of the work seemed to draw people into the room, and most would come directly across to speak to me, to browse the curated artworks, and to hear about the artists that i was representing. My small works were for sale, and in the two hours that I was performing I sold a good number of them. On the whole they were priced between 3 and 5 euros, 52 euros was raised. The individual works made by AirSpace studio artists were 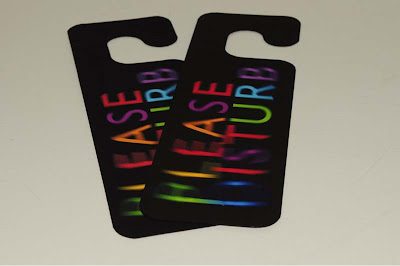 Phil Rawle's 'Please Disturb' signs. The sheer relevance of these made them very popular, and they were snapped up almost immediately. 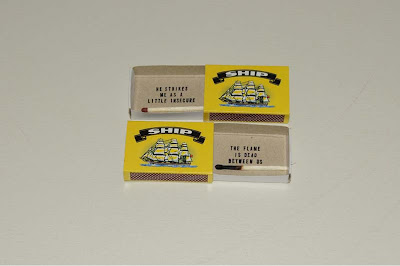 David Bethell created this miniature titled 'If you're caught on fire, and there's no water around - You had better run and then let that room burn down.' 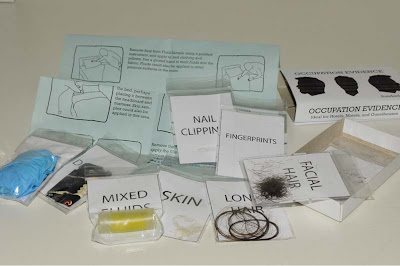 Andrew Branscombe created 'Occupation Evidence' which was a little kit which allows you to forensically fake the artist's presence (with instructions.) 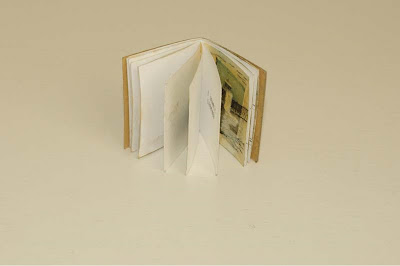 Katie Shipley created a miniature book called 'Make or Break' which was derived from snippets of found texts from Postcards sent from Margate a long time ago. Putting these snippets together the artist has created a narrative about a relationship. 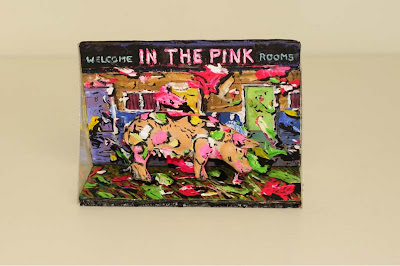 Bernard Charnley created 'In the Pink' which may have suggested ideas around luxury and dysfunction. 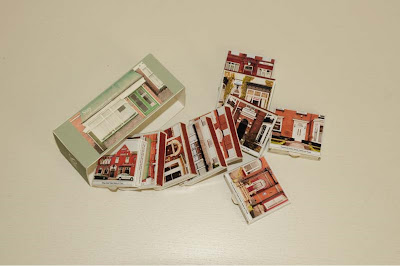 Glen Stoker created a series of matchboxes, each depicting a Stoke-on-Trent guest house or B and B, the sort of places that would never usually have souvenirs. 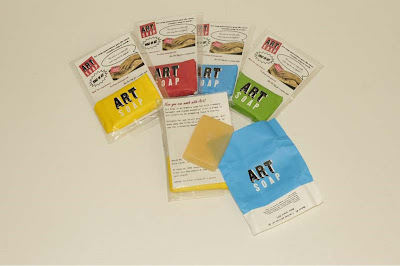 and Kate Lynch created this fantastic art soap promising to guarantee you the most creative way to wash. 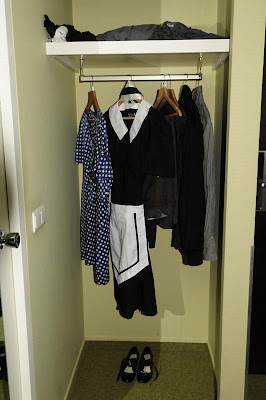 The chamber maids in hotel Bloom! were not the traditional type like me, they had rather modern trouser and tabard uniforms. For their benefit I decided to make an intervention within my hotel room throughout the duration of my stay. I displayed my chamber maid outfit in the minimalist 'wardrobe area' in the hope that they would see it; a private exhibition of my work. When putting the uniform together I had decided not to get a wig - up until now all of my characters have had their own hair, but I thought that as I had made a little headpiece it would not be necessary. I do not think that this was a mistake, as the wig is not purely an aesthetic prop, but also helps me to transform mentally - and will not be left out in future.

One of the really interesting things about Trajector was how differently people had approached the 'problem' of curating an exhibition in a hotel room, working with the various fixtures and fittings: beds, mirrors etc. 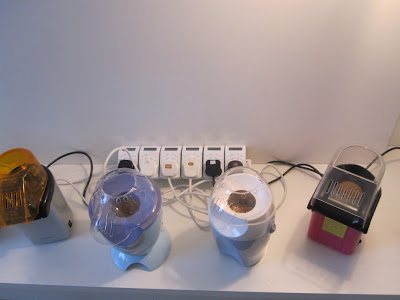 Nat Pitt's Project Space had removed the bed from the room entirely (the only space that had done so) and was using the long sideboard to show Ellie Harrison's 'The History of Financial Crises' this involved a number of popcorn machines which were all on timers to coincide with the various historical crises and crashes. At intervals during the weekend the popcorn machines would explode into action, spilling popcorn over the floor. Nat had also used the shelves to display Saulius Leonavicius' manipulated photograph of a hunter, perched on two cans of contraband meat. 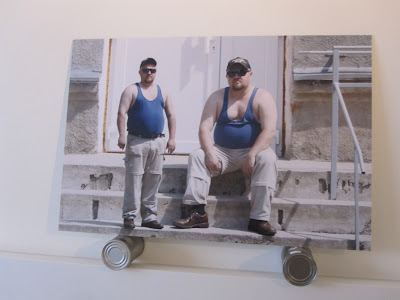 Rair (Rotterdam Artist's Residency Group) had made their room into a project space, showing documentation from their residencies. 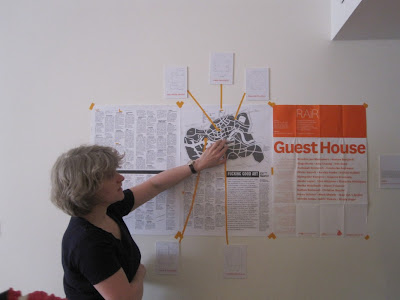 Rather than trying to sell artist's work, this was more about raising awareness of the programme, and spreading the word to artists. This was probably the friendliest of the spaces. But we met quite a few nice people at Trajector. 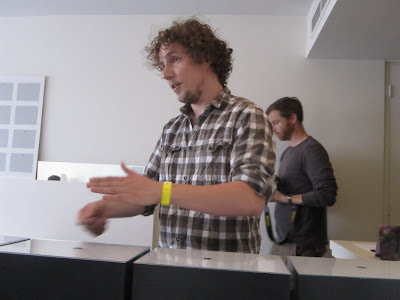 One of them was Jasper Van Es. One of the rooms was dedicated to his money works, all exploring the value of art through various reworkings of euro notes. 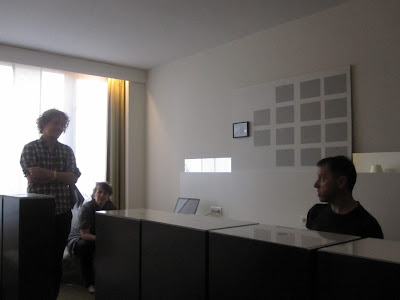 He had installed a series of plinths with his photocopied notes. See his website for more details of this interesting project. 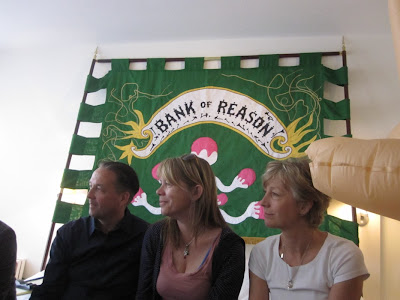 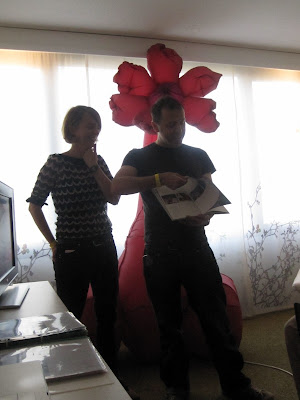 along with Adrian Rifkin. The talk covered ideas of art and value in the wake of the cuts. It was interesting that their room contained banners and video documentation from their parades. 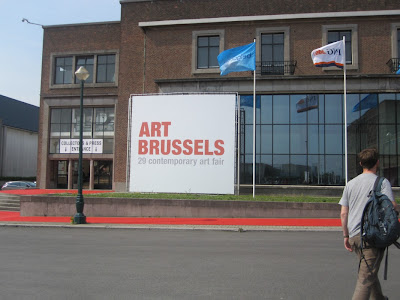 While in Brussels we popped across to the Brussels Art Fair to meet up with Kevin Hunt from Liverpool's Royal Standard. We wanted to go up the Atomium, which was created for the World Expo of 58. 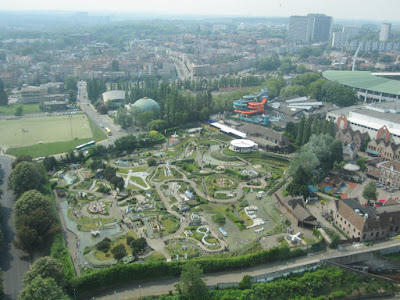 I was excited to see the view, and in particular The Mini Europe theme park. 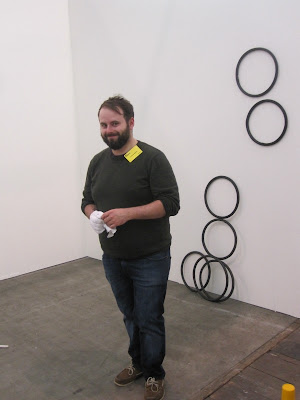 Excitingly Kev had a solo space in the show, which was presented by Stephane Simoens Contemporary Fine Art. Kev's work looked really great in the space, and created a welcome moment of calm within the busy art fair environment. Kev also invited us as his guests to The Art Brussels VIP party, which was very luxurious and exciting - thanks Kev!
On the way back from Brussels we stopped off in Ostende, which was a treat. A very strange place. I was happy to get this snap on the beach, which has featured in the Kiss Me Quick Zine. 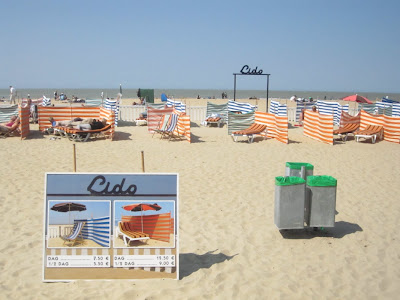 Overall, the experience of making a performance in an art fair told me that it is not the natural environment for my work, and I have to say that I didn't particularly enjoy the experience. I met a lot of great people, but felt that my work was out of place in the commercial enviroment, and although I am not adverse to this corner of the artworld, it is not where I feel my work fits. So, a very useful, and telling experience.
Posted by Anna Francis at 1:33 PM