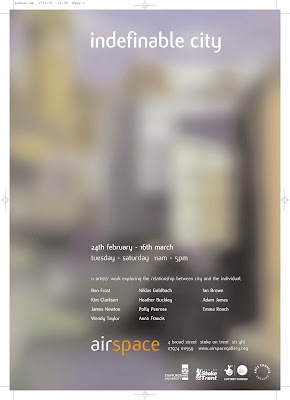 I returned to Stoke-on-Trent after a number of years away, doing a PGCE and spending a year in Japan. I returned to a city where I no longer knew anyone, and one which seemed to have no art scene to speak of. I didn't know that in 2005 two new graduates from Staffordshire University were cooking up plans to open Stoke-on-Trent's first contemporary art gallery.
I was really lucky to have been offered some lecturing on the BA Fine Art course, and although at first this was just a few hours, I was really pleased, as I had applied for around 40 jobs, sent out hundreds of C.V.'s and been for a number of interviews (always seeming to just be pipped at the post by those with more experience).
To supplement my teaching I also found work as a support worker, caring for a wheelchair user in their own home in Llandudno. The job meant I would go to Wales for one full week in three, and then have 2 weeks back in Stoke for my Lecturing and for my arts practice. Having been away I was completely without links or networks, either locally or nationally - and without them felt quite adrift. I was making work periodically, all around ideas of city development and the movement of people in cities, but it was not really going anywhere.
The turning point came in June 2006 at the University Degree Show, where I met David Bethell, one of the Directors of AirSpace Gallery. My colleague had mentioned me, and David invited me to come for a meeting, to discuss the idea that I could curate an exhibition at the newly formed gallery.
I was very nervous and excited when going to that first meeting and meeting Andrew Branscombe, who showed me around the amazing Falcon Works factory -where the gallery was based.
I had already thought of the idea of a show which would ask other artists to consider the areas I was interested in, and a call for work was quickly put together, which talked about the human costs of the regeneration of cities. I was fascinated by the city as a constantly moving target, ideas of palimpsest and flux were important. The size of the main space in the gallery told me that I could be ambitious. The boys (Dave and Andy ) were encouraging, but clear that I could really be experimental, it would be up to me what I might do and they would be there to help me. Wow.
The gallery had secured a bit of funding for their programme (though not much) and they were able to offer me a budget of £500 to work with. Deciding I wanted around a dozen artists I put out the call and waited.
In the end I had 11 artists (and had decided that as artist/curator I would be one of them).  Indefinable  City was underway. Some of the artists selected were already known to me, but others were fantastic surprises; 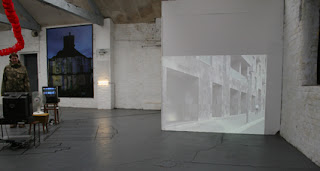 Niklas Goldbach, a Berlin based artist and film maker put forward his wonderful film My Barrio.
Adam James (in his final year of a printmaking MA at the Royal College at the time) offered prints, a specially built tower and a film.
Polly Penrose put forward her beautiful nude self-portraits, taken by night in work spaces - a factory, an office.
Aside from these there were a number of new works by eight other artists, Ben Frost, Wendy Taylor, Kim Clarkson, Heather Buckley, Emma Roach, James Newton, Ian Brown and me - a mixture of film, stencil work, installation, sculpture and photography. I was very pleased with the mix achieved.
I quickly discovered that some artists are easier to work with than others, it was a real learning curve, with one artist in particular whose ideas changed and moved on at an unreachable speed. This was a challenge, when trying to put together a coherent show.
The Falcon works, though an awe inspiring place, wasn't without its problems.  A February install in a space with no heating, and running on generators meant we all felt the cold, but the excitement, optimism and enthusiasm of the AirSpace team meant it was one of the most enjoyable experiences of my life. The show attracted record visitors for the gallery at the time, and the positive press coverage and audience feedback created a feeling that even here, in Stoke-on-Trent, anything could be possible.
I learnt a lot in those months of putting the show together. Press releases and artist statements, transport of artworks, damage to works, the problem of too many sound pieces in one space, artists with a different sense of urgency than the installation team, viewers who walked on works or bashed them about, local press photographers looking for the money shot.
Somehow, the finished show looked great, and I could not have been happier. The strange anticlimax afterwards lead me to try to retain my links with AirSpace, offering to write reviews or catalogue essays, getting involved where I could. When a studio space came up (now at 4, Broad St. the cold and constant break-ins leading to a gallery move) I jumped at the chance of becoming a fully fledged member.
The connections made through the gallery kickstarted a career in the arts that had previously been ambling along. Opportunities since have often been (directly or indirectly) related to my involvement with AirSpace. The provision of a space for critical debate and support have been invaluable, and though we have our artistic differences on the whole the projects and events we have worked on together have improved life for me in Stoke-on-Trent, and I hope this is true for other artists in the city.
A lot has changed in the city and in the UK as a whole since 2006. Cuts to the arts mean that it is much harder to keep projects like AirSpace going, and the six years have been hard for many of us, but we have survived so far.
The main thought that we have reached is that as the art world changes, artists need to adapt and change too. The approach taken six years ago, simply cannot work today, but back then we managed to put on a great show with few resources, a bit of cash and a lot of energy. None of the artists involved in Indefinable City were paid for their contributions however, and that is unsustainable as an approach. It seems right that AirSpace is undertaking the Stocktake at this time, just like the city, the gallery is also in a state of flux and change, and presently we are unsure what will emerge from the process, but what we should revisit is that optimism, enthusiasm and energy which we had at the beginning, some of which has waned as we have not done enough to keep ourselves sustained. This process will tell us a lot about our future and what I do know is that Stoke-on-Trent would be a much poorer place without AirSpace. Viva La AirSpace!
Here is a video interview - talking about all the work - 5 years ago!