A Walk with Emily 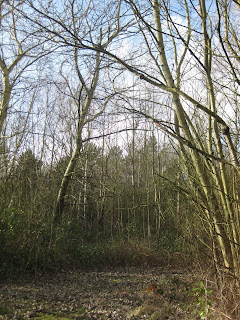 Emily, I am up on the garden festival site, near to the compass where Richard Wilson's lighthouse was.
It is February, but a warm and sunny day. It feels like that moment just before the world wakes up, it has been a time of struggle and hardship, and much has been lost. But there is something in the air, as if it is the moment before a breath.
There are so many tiny birds, some I don't know the names of. I can hear a strange mechanical tapping noise, like a hammer reverberating against a hollow drum. I have to walk right around the clump of trees before seeing a great crested woodpecker. He sees me and stops tapping, before disappearing. I am writing this from the clump of trees, hoping he will reappear. 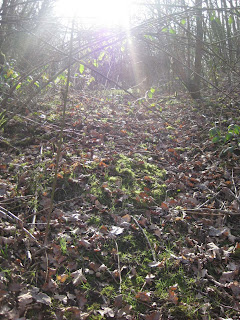 Small sounds come from the undergrowth and make me nervous, snapping twigs. It could be an animal, large, a rat the size of a dog, teeth baring - about to jump out. I move on. 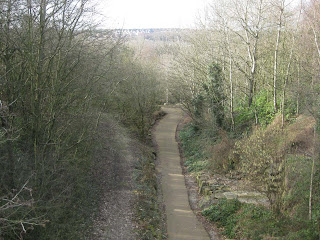 I am standing on the bridge over the rocky ravine, the bamboo has died-back over winter and more of the rock can be seen, a magpie coughs in a tree above. I see an old man with a boy and a dog in the distance. Something goes wrong with my ears and I can hear nothing but a high pitched whine, and then the sound is back. I suddenly notice the road noise and see the road through the trees, a car alarm, a lorry reversing, a constant hum of the city as it circles this forest.
A man passes me on the bridge, we look and then look away. 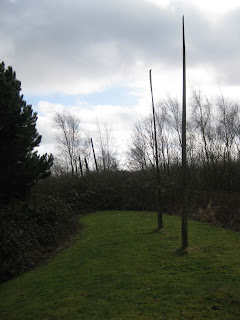 Just around the corner I come to the wooden spikes on the hill. There are only 6 left standing now. Again the feeling something is watching me from the brambles, dozens of eyes are trained on me. I am being stalked. 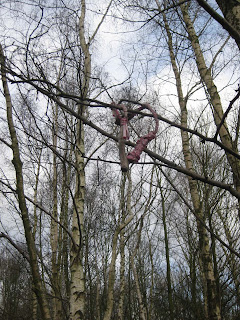 I go off track. There is something red hanging in a tree. A long ago boomerang. I am forced to take a lost path, the brambles and branches have taken this one. They grab at my coat and scratch at my face. I breathe as I regain the path.
But this is the wrong path and I have to double back. 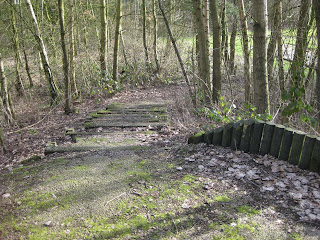 This staircase compels me up, it leads to a round platform, perfect for viewing - what? Something important was here. This spot sends me back in time. I am wearing a jumper dress, my sister a shell suit, we salute each other, a mixture of girl guides and peace hippies. We were never at the garden festival, so I can only imagine other people like us, in hopeful sunglasses, and floral dresses, with a packed lunch in a coolbox, looking for a day out. It rained a lot in 86, but it was nobody's fault back then. 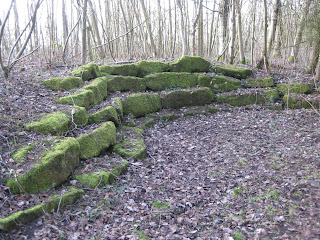 Something has changed here, one of my landmarks is missing and a new path has opened up. It leads around to some moss covered stones like a mini ampitheatre. Back on the path I head towards the trig point. Suddenly the weight of 26 years is clear. This was a bare hill once, with a lone figure standing next to a column. 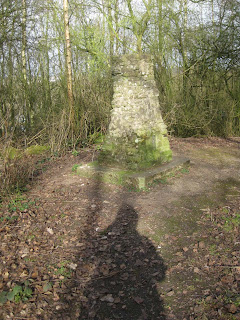 The figure was misplaced some time ago, and has become a legend. Now this is an unnatural forest. A wild boar snorts and rampages at the bottom of the hill. I will take another route. Emerging from the trees I hear children yelling, cars, a crossing beeping green, and magpies cackling from every direction. 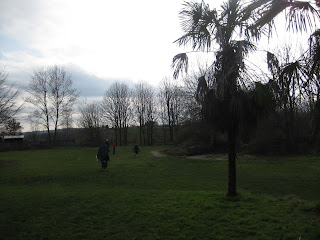 Standing between two palm trees, a family group comes from behind me, making their way towards what I know is coming; up and over the hill ahead. I linger here in the area which was the labyrinth. I could do with a broom to remove all of the leaves that have fallen on the round wooden feature.
The final remnant on my way out is the paved circle, with flying birds before a red sun. It is overtaken with grass, but seems right. This place belongs to the birds. At least it does today.
Emerging over the hill I am spewed out onto the retail park. Sunday afternoon shoppers milling about in and out of cars into supermarkets electrical shops, fast food outlets. I am back. 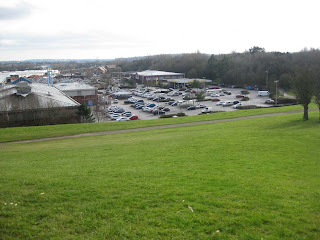 A reply from Emily:
I have walked the perimeter looking for an entrance but the previous triangular hole I’ve always used is gone, replaced by high wooden boardings and signs covered with the developer’s name and idyllic images of a development currently halted by the recession.
On my way to the site, I breathed a huge sigh of relief as I drove past (like every journey) and saw that the carcass of the dragon slide was still standing. In my dreams as a 5 year-old, this was the centre of an underwater world in a reoccurring dream, which I glided around, barely needing to swim. The dragon’s mouth was part of a long series of red tunnels full of water that left me giddy even after I woke up, only slightly irritated that the whole of my primary school class had been there to share it with me. Only his head remains now, but his long neck used to be the best part. The site still has an oneiric atmosphere; dreamlike because it exists firmly in the past, in my past, as well as being here, now, in front of me. I feel sure Foucault would say this was a heterotopia linked to slices in time (past with the present and its potential for the future), a perfect example of one of these heterochronies1.
Cars stream steadily past, surprised to see a pedestrian where there are usually no signs of life. It’s a 30 mile an hour limit along there but I don’t think anyone is sticking to it, I can feel myself bristle on the narrower part of the pavement as each car displaces the air towards me.
My aunt had a job as a busker on the site during that summer of 1984, so I felt hugely important, like this connection gave me power and ownership over the site. My twin sister and I could go in free and spent much of the summer swanning around, sitting on huge pencil benches in an exotic glass palm house, eating funny feet and playing in the ball pool. We also helped Jill out with her songs. Our favourite went like this:
I’ve found a baby bumble bee, won’t my mummy be proud of me. (hold out hand to show bee with a huge smiling, proud face)
OUCH! I was stung by a baby bumble bee, won’t my mummy be sad for me. (react to an imaginary sting and show a very sad face)
I’m squashing up a baby bumble bee, won’t my mummy be cross with me. (grind hands together
I’m licking up a baby bumble bee, won’t my mummy be cross with me. (lick palms as you sing to distort the words)
I’m puking up a baby bumble bee, won’t my mummy be cross with me (exaggerating vomiting with noises, doubtful face).

The song appealed to our disgusting sides and we took special delight in licking our palms with the whole of our tongues, but there were so many bees and so many flowers, that it seemed made for that particular place and time. Now I can see long grasses and a few wild flowers, it’s a sparse landscape, raggedy and kind of torn rather than the plump, neat planting that used to be there.

Walking around the fencing I feel glad I can’t get in somehow, the distance stops the other, more colourful place getting eroded by the reality. It’s a liminal space, neither derelict nor rebuilt, it’s waiting for inhabitants and only half dressed. Without flowers, the brightest colour is the restored Japanese pagoda and tori, which still seem incredibly promising, like anything could happen in that part of the garden. A bit further along I come across the entrance gates and it feels like I could be anywhere, a theme park of the Giardini in between biennials. I can just make out the across the park and it reminds me how much water there used to be here; fountains, a Blue Peter ship and the Yellow Submarine of course. I can’t place where they would have been, nor can I remember any real plan or ways to navigate the site – I was too young. Now it’s only a memory of excitement and a vague sense of vastness, both in the landscape but also in what was possible there. I decide I like it half-complete because it allows that possibility.

Heading back to my car (parked at the pub at the water) in warm sun – it was always sunny there wasn’t it? - I imagine the padded green arms of a massive liver bird hugging me as my face presses into its soft side.

This text, entitled "Des Espace Autres," and published by the French journal Architecture /Mouvement/ Continuité in October, 1984, was the basis of a lecture given by Michel Foucault in March 1967.
http://foucault.info/documents/heteroTopia/foucault.heteroTopia.en.html