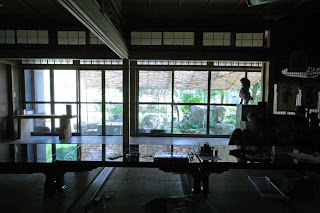 I have been at Headspace for a week already. I feel like I haven't physically done as much as I would usually do on a residency, but this residency is intentionally different.
This is a retreat as much as it is a residency, and what I quickly realised was that I have very much needed some Headspace! Over the past 5 years my art practice has been a roller coaster - moving from one thing to another, often having a number of projects on the go at once. I speak all the time to students about the importance of documentation, a written commentary, and time to reflect. I have been steadfastly doing the first two, but time to reflect has been a luxury that I could not afford. 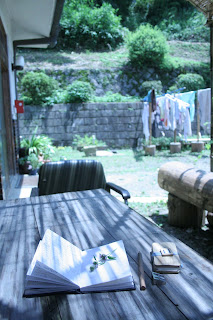 So this week, alongside some drawing,walking, photographing, and thinking about 'Indefinable City II' I have also been looking back at my C.V. and blog, and categorising the projects and activities, to see if my work is as coherent as I thought. The categories that I set out as important are: work about regeneration, advocacy of art and artists, green stuff and things that don't fit anywhere: I found that some things do not fit into the categories that I set out, and some things fit into more than one. I then went through again to see if I could draw out any common themes that seemed to emerge, these were; regeneration, sustainability, walking, green/growing, interim use for derelict/unused sites, conversation/communication and then some woolly ones: something to do with text, often suggesting the potentially romantic, something to do with recognising whats around in terms of resources or how space is organised and used.
I then went through my c.v. and took off everything that I didn't consider to be 'good art' or something which actually moved me on and was authentic enquiry - that felt good. From what was left I was surprised to find that 14 out of 18 projects were to do with regeneration or development, but they are also often to do with the artist's role in a changing society/city/landscape/economy.  Going through the same list to see which involve conversation - the number is 12, so there are some very strong threads through what I do. This seems to suggest that though I am really bored of the word regeneration, I am still interested in it, but perhaps even more now to do with 'The artist's role in (a) changing society.' I have also been thinking about the way many of the works respond to gaps or situations where a solution is being sought - I have written up my thoughts on this as a piece of text looking at Participation. Also, I do seem to like creating conversation spaces: despite this being something that actually makes me nervous.


I have also tried to draw out what I am still interested in exploring, what do I get some (artistic) satisfaction out of and wish to continue with or do more of, what should my focus be for the next few years?: 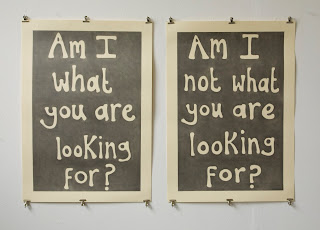 Here is the text I have written around my thoughts on gaps and participation: 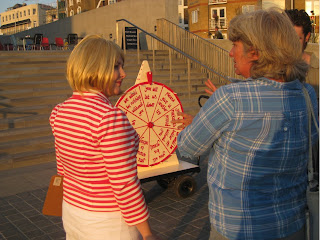 My work often involves participation, but not always for altruistic reasons. Yes, I am interested in working with others, in creating situations and activities for people to get involved in, but not necessarily because I want them to get something out of it (although it very good if they do, that is not my prime concern.) Often, it's because I want to see their response; like an experiment.
Also, sometimes my work has been called 'socially engaged' which sounds nice, but more accurately, I think my responses are often a response to a gap, or a lack (I think Adam Chodzko refers to them as interruptions.) I hope to frame or draw attention to the gap - sometimes by filling it (temporarily) sometimes by creating a space exploring it and having a conversation about it. This feels like an important part of what I do. I am not a problem solver, social worker or box ticker.
The question about value does not overly concern me - I believe that the experience of the artwork, new context, life experience is enough of a reward in itself but still: the question about value seems to arise more, with work of a participatory nature than with other art practices: but how to measure 'meaningful value?' Can't it just be 'I enjoyed being involved, seeing, doing that?' Paintings don't have this problem.
I am interested in where the artwork is with works of a participatory nature - does there have to be a definable moment (event, performance etc) or object (solid artwork, book, exhibition etc) Or can the entire project be the work. Is it enough that an interaction has taken place? Is it enough that I, as instigator artist have designated this interaction as an artwork?
A man came by the window just now and I waved at him - If I had said beforehand that if someone comes by, and I wave at them, and that will be the artwork - then could that be participatory art? 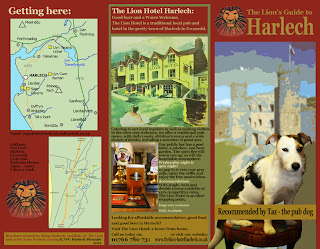 My work is often about suggestions or propositions for how to fill the gap, but the proposition is time limited, because ultimately I am not a gap filler (in a permanent sense) but like the bandstand piece, or the tour guide or the travel brochures in Harlech - the work responds to where something is missing, and someone (me or someone else) expresses a need to fill the gap. My work will temporarily fill it, but not say - this is the answer, but rather, this could be one answer. Then maybe someone will be inspired to take it on, which has happened - but then again, maybe not (which I am also fine with.)
Sometimes, the way that the gap needs to be filled requires me to create an intervention which looks like something else, the viewer (and even other artists) can misconstrue the intention of what I am doing. For example, with the Bandstand piece, from Common Ground 2010, I organised to repopulate the forever empty bandstand by hiring a brass band, putting up hanging baskets and bunting, organising for  chairs to be delivered and giving out ice creams -  people said, this is great, you should organise bands to play in the park all summer. 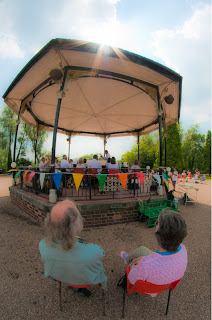 My interest as an artist was not to be the band stand events organiser, but rather to draw attention to the band stand as a potential event spot. Since then Park Live! happens regularly in the park (which I am not saying is because of my intervention, but it is possible isn't it?) In a different way the travel brochures created as part of the Harlech Biennial residency, May 2012 were misunderstood. I worked with the landlady, Rhian Roberts, from the local pub to create a travel brochure for the town, which has seen a major decline in tourism over the past few years, which isn't helped by a lack of advertising about the town, and what can be done there. We created a brochure together based on Rhian's ideas of what makes Harlech great. I visited the places that she told me should go in the brochure, which helped to orientate me around the town. At the exhibition at the end of the residency I heard some of the other artists from the residency discussing my work, they said - 'She is a graphic designer - she makes brochures.'
I wonder if I should worry that I am not communicating my intentions well enough, or if it is OK when people misunderstand the work.
Posted by Anna Francis at 5:40 AM