This summer while on my research trip in Osaka, Japan I went to an Ikebana demonstration. It gave me an idea, to research ikebana while I was on my mountain residency at Headspace in Nara. 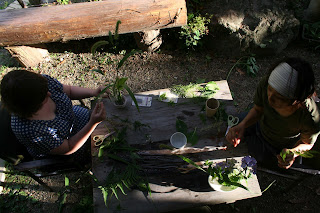 Aiko and I did a bit of ikebana practising, and I purchased some books and read up about the Japanese art of flower arranging. It gave me an idea about the ABC site next to the gallery. 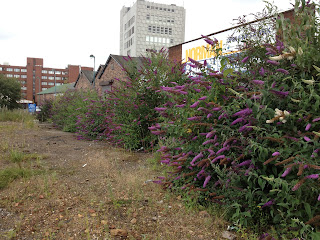 For some time myself and other members of AirSpace studio have been considering these Brownfield sites as places of potential. They are not being recognised as such, but in other cities people are using interim sites as interim community growing space. One example is NVA's fantastic SAGE (Sow And Grow Everywhere) project.
On my return to UK the AirSpace studio artists went to Low Parkamoor - Grizedale for a retreat, which I used as an opportunity to practice my ikebana skills.
The AirSpace studio show opened on Friday, where I presented my new work - Brownfield Ikebana - the week before the ikebana's I made on 3 Brownfield sites were presented in the AirSpace window. The three sites chosen are interesting, as they are at different stages of non-development. The Abbatoir was only demolished about a year ago, and yet is surprisingly diverse in terms of the wildflower species to be found there, then the ANC site is a few years older, and the old greyhound track even older still. I hadn't planned to show the ikebana arrangements in the window - I was making them in order to create a new 'works instruction' for the studio show - and then it turned out the window was empty for a week, so we put them in to fill the slot.
The statement accompanying read: 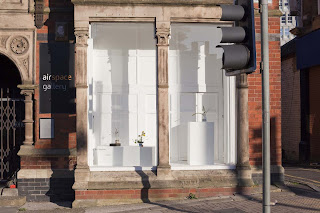 In Brownfield Ikebana Anna presents part of a new series of works, which aim to draw attention to some of the brownfield sites that can be found throughout the city, in the wake of various now defunct or collapsed regeneration programmes. The schemes saw the demolition of buildings and homes all over the city, but with the funding to rebuild seemingly swallowed up with the changing political climate, the interim period between demolition and development seems set to grow. 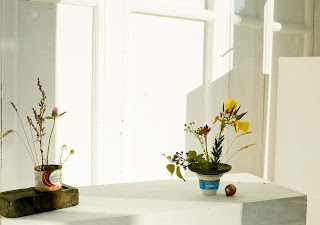 Empty spaces are now populated by wildflowers and other wildlife, and in some places citizen activism has seen the local population scattering wildflower seeds, improving the environment in the intervening period. Brownfield Ikebanacelebrates these impromptu wildlife havens, using the Japanese art of flower arranging, but replacing the vase with items of  rubbish salvaged from 3 brownfield sites close to the gallery  replacing the flowers with 'weeds.' 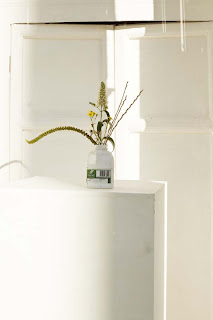 Perhaps Brownfield Ikebana can act as a call for the council to nurture these sites, and see their potential in the short-term, rather than allowing them to become fly-tipping zones. 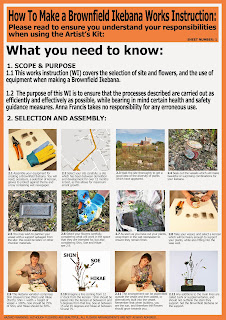 Then on Friday for the studio show I presented my new works instruction, and revisited the ABC site to create a Brownfield Ikebana live during the private view. 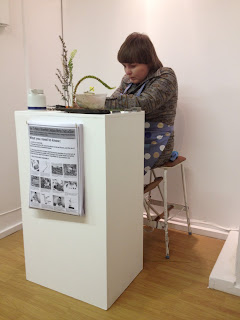 It was a very different thing to do the ikebana in front of people, and was not such an enjoyable experience as previously. I was quite pleased with the vessel which I found this time, which was an empty scotch egg packet. 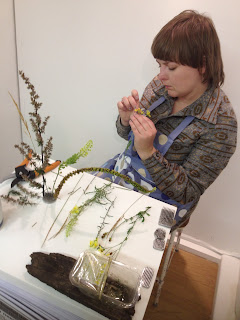 I think the ABC site is particularly awful, as the cinema was knocked down to build TESCO - and this bit of land in between the gallery and Tesco has been in limbo. Shoppers sit on the wall which has been built around the site, and throw their rubbish over the wall - so there is plenty of choice for ikebana - and also plenty for the local rat population to eat. Such a big company as Tesco should do something about making the site better - potentially becoming a community asset. 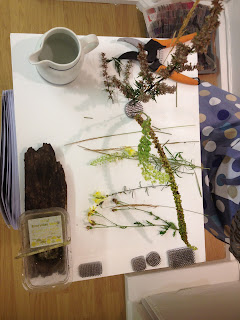 On the last weekend of the studio show (06/10/12 from 2 - 4pm) I will be running a Brownfield Ikebana workshop - showing the participants some of the techniques I have picked up - but mainly as an opportunity to explore the Brownfield Sites of our city, and talk about their interim potential. 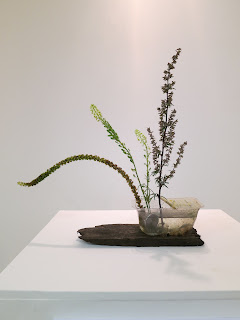