Conjunction 12 opened on Friday.  I am one of the curators of the biennial, and this year we are exploring the theme 'The Art of Survival.' There is a lot of information about the programme and events on the Conjunction website, but I thought I would include details of the Artist Soup Kitchen, which I have been leading on.


Each Saturday during Conjunction a special Artist Soup Kitchen will take place from 1-3pm in the AirSpace gallery resource room, and the first took place on 3rd November. We were keen to develop a platform of critical debate and support for creative practitioners during Conjunction, and felt that it was important to create a situation which would be more than the average artist talk, but would be more participatory, and that those present would feel able to contribute. I find that sharing a meal can create just such an environment, the right amount of distraction and enjoyment to be conducive to meaningful discussion.

The first of our soup kitchens took place this Saturday, this week’s soup was Carrot and Ginger. The recipe is below, and the feedback from the hungry artists was that it was great, with a few writing the recipe down from the wall, in order to make it again. 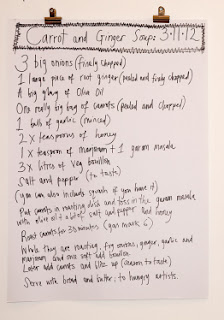 This week was aimed at artists working with communities and the public, and we were exploring how we can ensure our projects are sustainable, and that as practitioners we have the resilience to keep going.

The session was lead by Penny Vincent from The Creative Communities Unit at Staffordshire University. Penny works in creative community development, and introduced one of her own projects Parklive! as a way of exploring the idea that we should not wait for permission to do something, or hope and wait for someone else to do something that we would like to see done. The Parklive! project came about, as Penny had been thinking that she wished someone would organise a series of events on Hanley Park bandstand. She thought to herself, hang on, I am someone! and that is where it started. It also leads to another consideration, and that is the question of sustainability. How to involve others in the project, to ensure that all of the energy does not have to come from you.

Penny had also invited Grega Greaves from CANS to discuss The Woodlands Road Mural project that he worked on, which was a partnership with Sir Graham Balfour School, Tillington Manor Primary School and Stafford and Rural Housing. The project worked with a huge number of local people, and the mural has been very well received and looked after. This lead to a discussion about impact measuring, and how difficult it can be to prove the impact of participatory activity of this kind.

We then heard about Tony Jones' involvement as lead artist on the Happy Mandays Photography Group. Tony has been instrumental in setting up and sustaining the project for years, which works with men with Mental Health care needs. The group work with a variety or photographic approaches and tools, as a way of looking out at the world, and as a therapeutic activity. When Tony first got involved, he could not have envisaged how long his involvement would end up being, and also how beneficial the project would turn out to be for a number of the groups members. We also discussed sustainability, Tony has now decided to stop leading the group, but far from folding, the group will continue (self-managed). We considered what the magic formula might be, what is it that makes some projects continue once the artist/developer has left? It seems that of course there is no one magic formula, but making real attempts to understand the context and people you are working with, and confronting problems that necessarily occur with relational projects, and taking a clear stance in terms of ethics and rules, and also establishing and managing expectations can all help to ensure sustainability, as well as creating a space where participants take ownership (and feel like co-producers, as with Tony's group.)

The Practitioners in the room discussed how difficult it can be to keep going as a creative practitioner, and what we each do to survive (both in terms of maintaining energy, and economic stability).

The Survival Bread, delivered to The Artist Soup Kitchen that morning by B Arts Susan Clarke, helped the soup to go down marvelously  and provided a model of how to survive: help and support each other where we can.

Throughout the session, the participants around the table were recording their responses to the discussion on the table cloth, which is now on display on the wall of the resource room. The doodles and notes have been recorded below, and some of these will go into The Artist Soup Kitchen Zine, which will be created at the end of the series, including notes, thoughts and recipes.

After the success of this weeks session, we are really looking forward to next week's kitchen, which is lead by Professor David Manley, and explores self-publishing, and asks the question, is it enough to survive rather than thrive? We will also be tucking into some Russian Vegetable Soup.