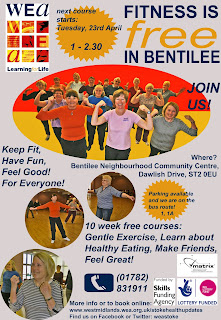 Just before Christmas I had a phone call from Janet Henson from the Worker's Education Authority. The WEA was set up in 1903 to support the educational needs of working men and women, and since then has been committed to providing lifelong learning. I really support what they do, and think they provide fantastic and important opportunities for people of all ages in the UK.
I noticed that with the cuts happening across the city of Stoke-on-Trent, with quite a lot of public service buildings closing, the WEA's classes and reach had been affected.
Janet was ringing up with a query about finding an artist to work with the WEA to create leaflets for their classes, as during these times of swingeing cuts, having good attendance numbers is more important than ever. Janet said that the Bentilee group had been fundraising, and had managed to raise £160 to pay someone to make them a advertising poster, but that this would also need to pay for the printing costs. I said I would be happy to work with the learners to design their own poster, as I didn't think they would be able to afford to pay a designer and afford printing costs: and so I went along to their Christmas party to meet them, and discuss initial ideas. Then just after Christmas I went along to their class.
We started by looking at some other gym posters for ideas and then answering questions about what attracts each of them to come to the class, and what benefits they could identify from being there. They then each had to come up with possible slogans for the poster.
After that we got up and did some light exercise, as an opportunity to take some photographs of the group. Over the two meetings I got a good idea of what the group wanted, and then went away to put it all together.
Once complete the poster went back to them for feedback, and final alterations were made.
They were really pleased with it, as were the WEA.
Later Janet got back in touch to say one of the other groups had seen the poster, and one of their learners had been inspired to make their own version, based on the Bentilee group's design. Here is what Janet said:
'Hi Anna, please have a look at the attachment . One of our WEA volunteers has made a flyer, for the YMCA class,modelled on your flyer. She took her own photo's and put it together. I think she has done a wonderful job. You have inspired learners to have a go.'
Janet then asked if the design made for Bentilee could be rolled out across the 20 classes in the area - which it will be.
I was really pleased to work with the WEA gym Bentilee on this. I don't often offer my skills for free, but for something like this I was really happy to.