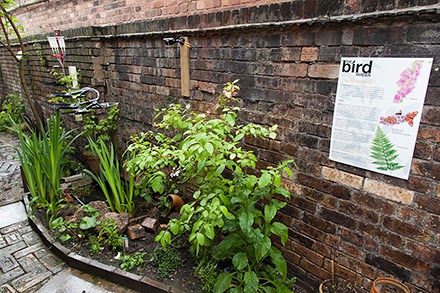 In 2013 at AirSpace Gallery we developed the back of the gallery space to become what is now known as the Bird Yarden. We were really interested to think carefully about that outdoor space, as all around the city the many brownfield sites which had developed into interim wildlife havens are now being developed, leaving many birds and animals with less space to forage, nest and roam. Our little outdoor space is then an important part of the local ecology. 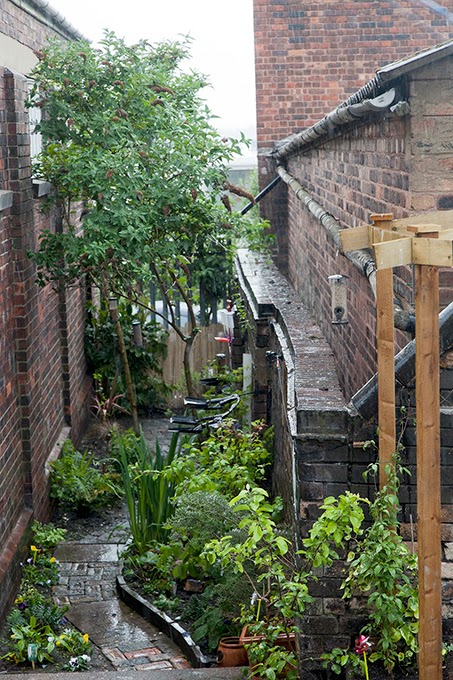 We designed the space so that the planting schemes and landscaping all maximise nesting and food sources for birds, as they are our most regular visitors. We have actually been feeding the goldfinches in the yard for around 4 years, and their numbers have grown as a result. The launch of the space was a fantastic success, and is documented here: http://airspacegallery.blogspot.co.uk/2013_06_01_archive.html 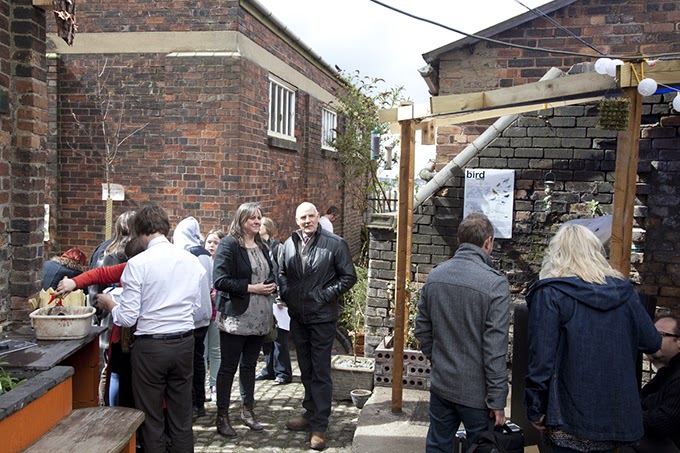 More than 100 people came to the gallery that day for the various talks and workshops, and we have a great time. 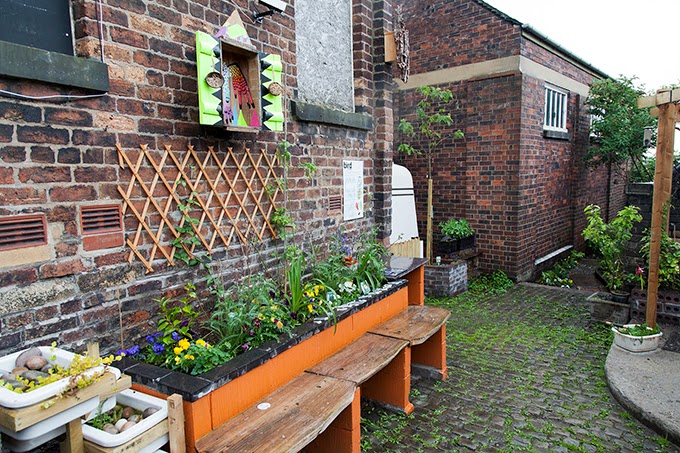 Myself and my partner Andrew Branscombe felt very positive about the experience. It was around the same time that we went for a walk around the grounds of Calke Abbey - and came across a series of bird watchers and bird hides, which got us thinking...People were very positive about the Bird Yarden, and it felt to us that accessing conversations with the public about the environment and birdlife seemed to happen much more easily than some of the conversations we have had about art. It is also pertinent to consider wildlife in urban environments in relation to regeneration, as many brownfield sites around Stoke-on-Trent are now being developed - and what have become impromptu wildlife havens are diminishing in number. We are interested in exploring whether developers consider local ecologies in relation to development.
This lead to a collaborative idea developing, we started thinking that our learning from the Bird Yarden could be taken out of the gallery, and around the city - visiting different sites, and exploring spaces through a project looking at Urban Birdlife and other wildlife.
We came up with Birder's Paradise. 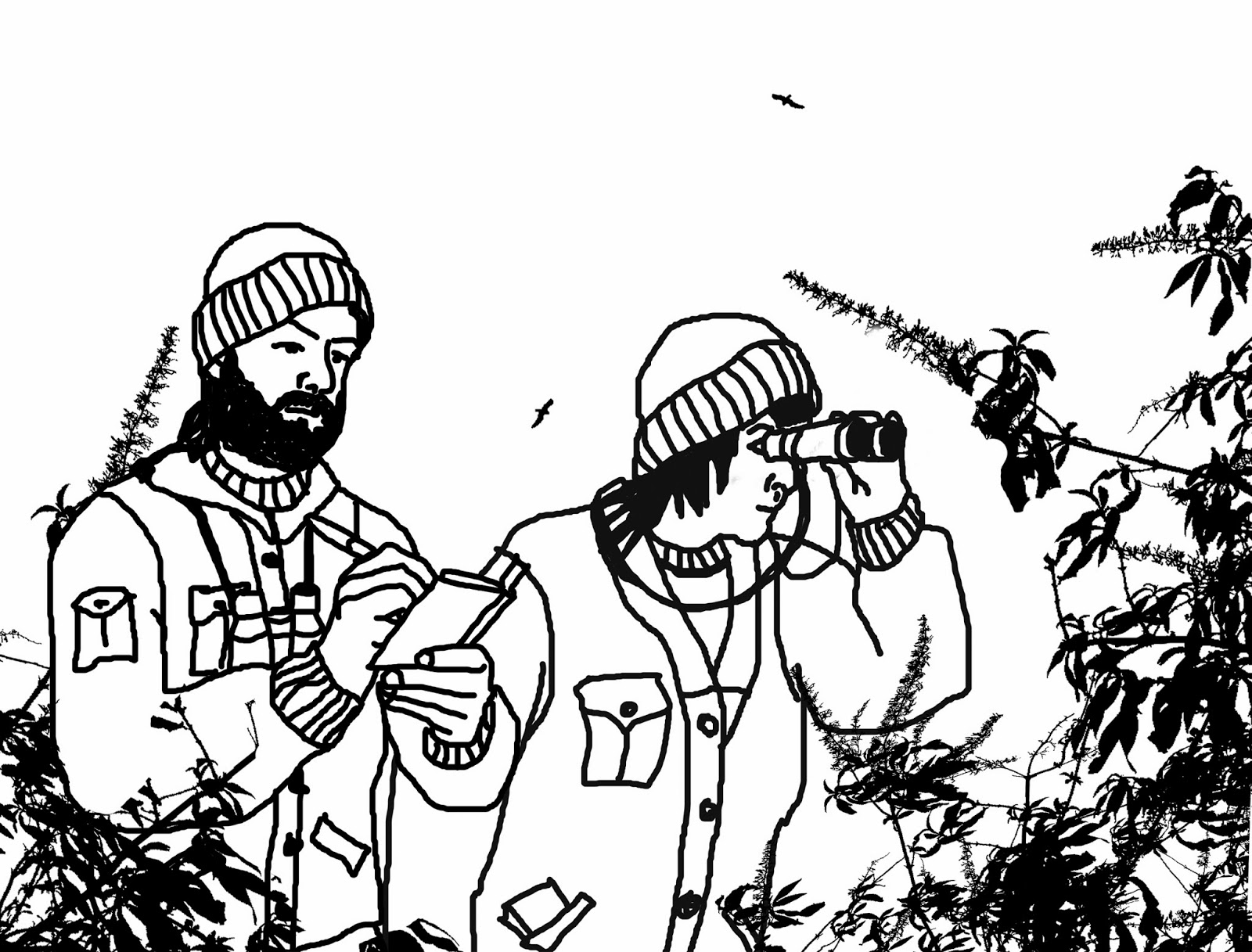 Birder's Paradise would see us becoming Urban Birder's (Birdwatchers) with a mobile Bird hide lab, which can be taken to different sites, and used as a way of exploring space - and creating artworks and conversation about Regeneration, and the impact that man has on the environment, and the importance of making space for nature within development plans. 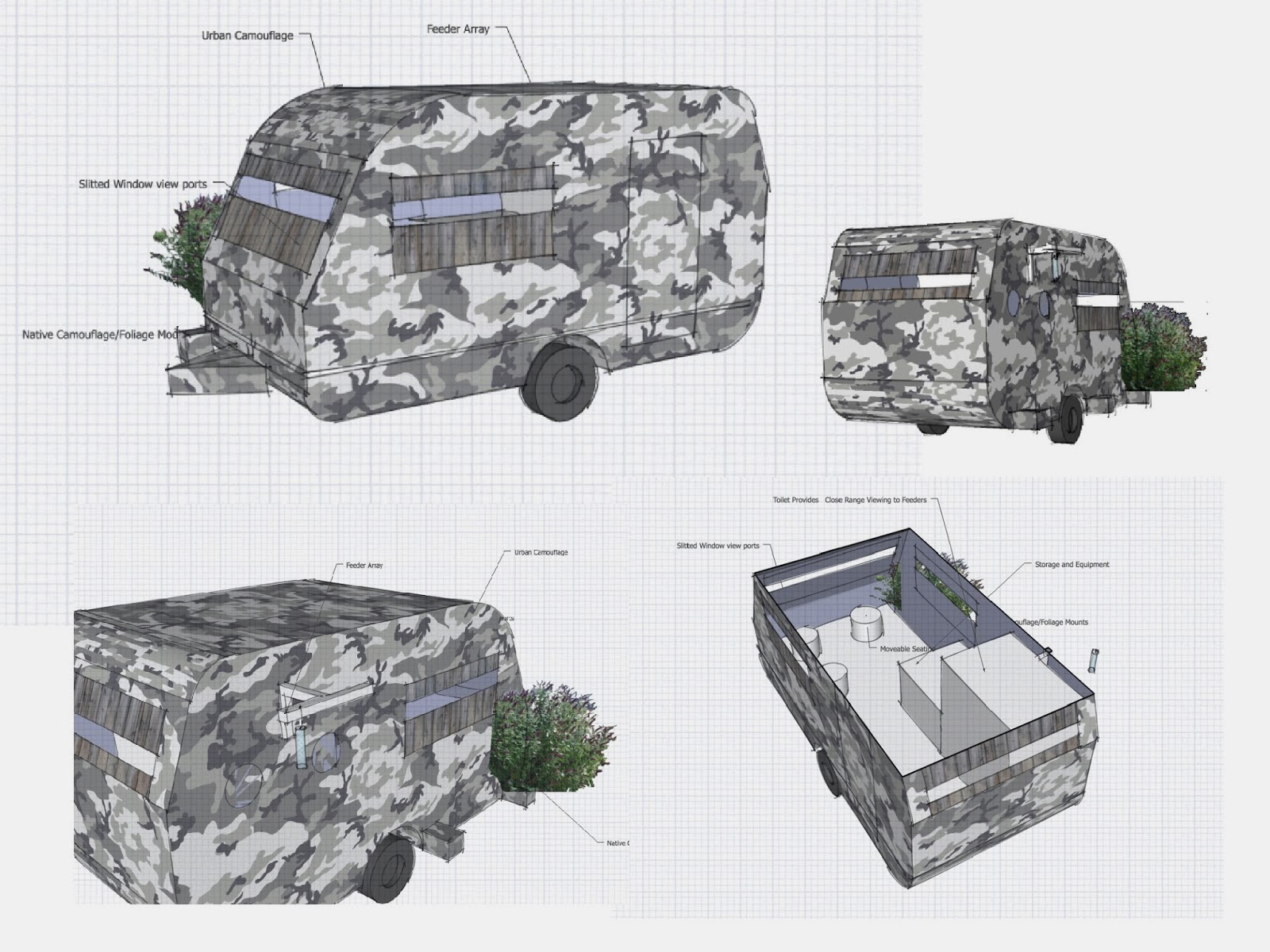 We hoped that we could explore potential opportunities for the project - putting together a proposal which involved renovating a caravan, turning it into a bird hide, which would be used as a residency space initially, to research and make works, and then carry out some workshops with the public, and later create an exhibition of our findings to be exhibited within the bird hide and toured around. We went on a research trip to Dungeness RSPB reserve. 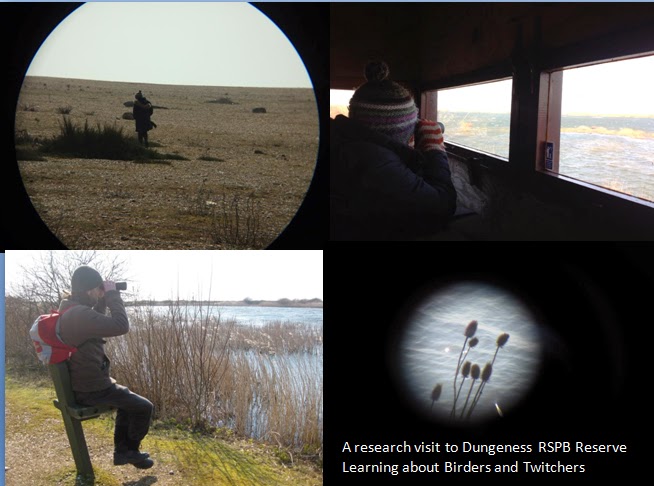 We looked out for relevant commissions, and applied to a couple of projects which seemed to fit: but what we really wanted to do, was to carry out this project in Stoke-on-Trent, so we put the idea on the back burner, while we considered how to make it happen.
At that point there was a call for artists to propose works for the exciting New Library of Birmingham. I have always wanted to do a project in a library - and this looked really fantastic. So we thought about how Birder's Paradise could be adapted to a brand new library setting, and put forward a proposal to do a one-week residency at the library, working with the public to carry out 'birdwatching' activity and discovering species of birds that can be found in books, working towards creating a birdwatching trail through the library.
We were lucky enough to be shortlisted and later offered a commission (rather than the residency) to create the birdwatching trail. At first it seemed a bit strange to be offered the commission, as we had envisioned the participatory activity uncovering the content for the trail, but the commissioners (Capsule) felt the idea could work as an artwork, which would last from September to December - and therefore have more presence i9n the programme.
I The programme of commissioning which Capsule put together for the opening months of the new library was exciting, high profile and really high quality - so we were thrilled to be included. The couple of months leading up to the opening saw us working with Capsule to hone the idea for the Birder's Trail - and it really was a quite thorough process of negotiation, which I feel it is worth mentioning here, as other artists may find it interesting.
The commission budget was £1,000 between the two of us, and £2,000 materials/fabrication budget. We were really excited to be offered such a wonderful budget, and saw it as a real opportunity to create a beautiful new artwork.
We started to consider the format the artwork could take. Capsule suggested we could make the birds in the format of silhouettes cut out in perspex, which could be dispersed throughout the library. We felt that this would be striking, but that perhaps there were other options to be explored - then came the process of honing ideas and negotiating with the commissioner. We learnt quite a lot from this process, as often as the artist - you are not 'in the know' about the context and restrictions which you are working within, and have to feel your way through the process;
We thought about the idea of a curio cabinet: housing literary birds in glass vitrines. 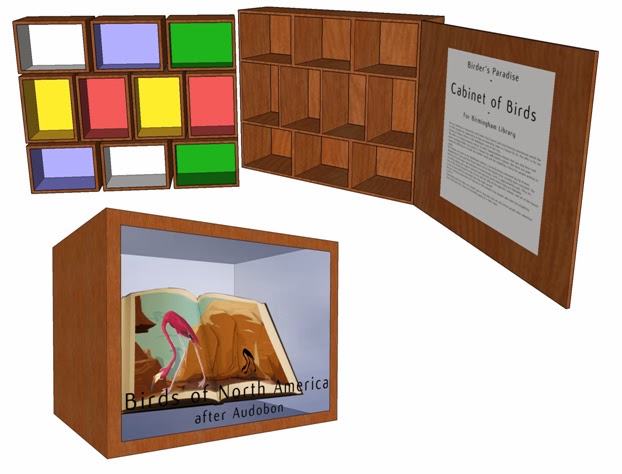 Each vitrine could have it's own format - decided in relation to the book which the bird was from. We thought about a variety of approaches for each of the vitrines: making each bird different, for example: Bewick's beautiful book of woodblock prints of birds of the British Isles, having a woodblock housed inside the vitrine, which the public could take a rubbing from. The idea would be that the cabinet could be sited close to the entrance of the library, and our binoculars and worksheets could be inside, and a sign explaining that the birds from the cabinet have escaped, and can be discovered nesting and perching (in their vitrines) around the library.
We were excited about the cabinet, and found a carpenter who could build it for us, using stained woods, to give it character. Unfortunately, when we went back to the commissioner there were a number of problems with our idea: 1. the opening weeks of the library were expected to be incredibly busy (in fact in just over a week - the library welcomed its 100,000th visitor!) and so it would be impossible to find a site for the cabinet near the entrance. 2. Capsule had already commissioned a cabinet from another artist, and so didn't want another one. 3. though the variety of approaches might be interesting, it may also mean there is less of a recognisable identity to the artwork. 4. The vitrines themselves would be difficult to site around the library, and their could be problems with health and safety. And so with all of these issues, we needed to have a rethink.
Another idea we came up with involved using sheets of clear perspex, layered up to create a diorama, a technique I have seen used in regional museums and was keen to try out. We felt that this could work, as it could give the illusion of 3 dimensions, but be almost flat, and therefore we thought, more siteable in the new library. Andy created a mock up to explain what we wanted to do: 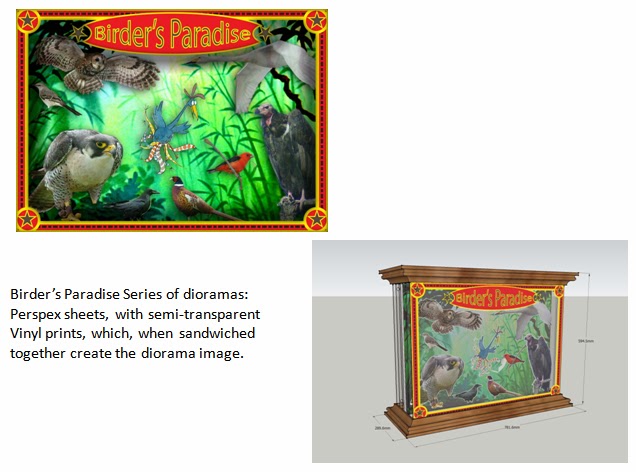 Again we went back to the commissioner with our idea, but unfortunately it turned out that it still would not work, as many of the 12 individual works for the trail would be sited at height (something we had not known before) and therefore the detail would be lost. Capsule advised us to revisit the original suggestion about silhouettes, and as time was getting close by then, we went with it.
So, we put forward a series of bird shaped silhouettes, each relating to a different book from the New Library of Birmingham's collection. We felt that black was the most appropriate colour for the perspex, but as the ceiling of the library is black in many places, and the sites of the birds would see them viewed, often from below with the ceiling in the background, in the end it was agreed that the perspex would be yellow: the same colour as the library floor. 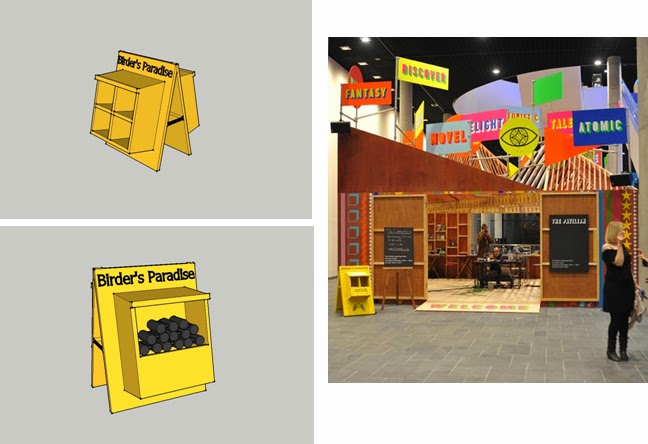 We also built an a board, to be sited close to the entrance, where people could learn about the trail, pick up a pair of binoculars and a worksheet, and explore the new library.
In the end we were really happy with how the trail installation turned out. The negotiation and development process was much more involved than we had first thought - and in the end we felt that there was less creative space for us as artists than there may have been, but overall, we were really pleased to have been commissioned and included within the fantastic programme of artworks and events that Capsule had curated. 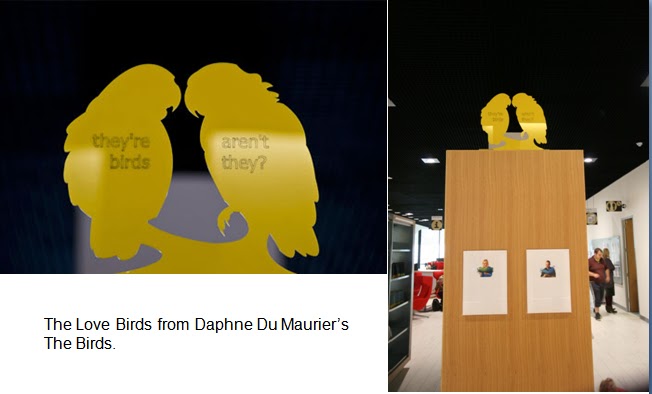 We led a couple of Birder's tours during the programme, which worked really well, and were a fantastic way to introduce the public to the literary significance of birds, and also the Library's collections. 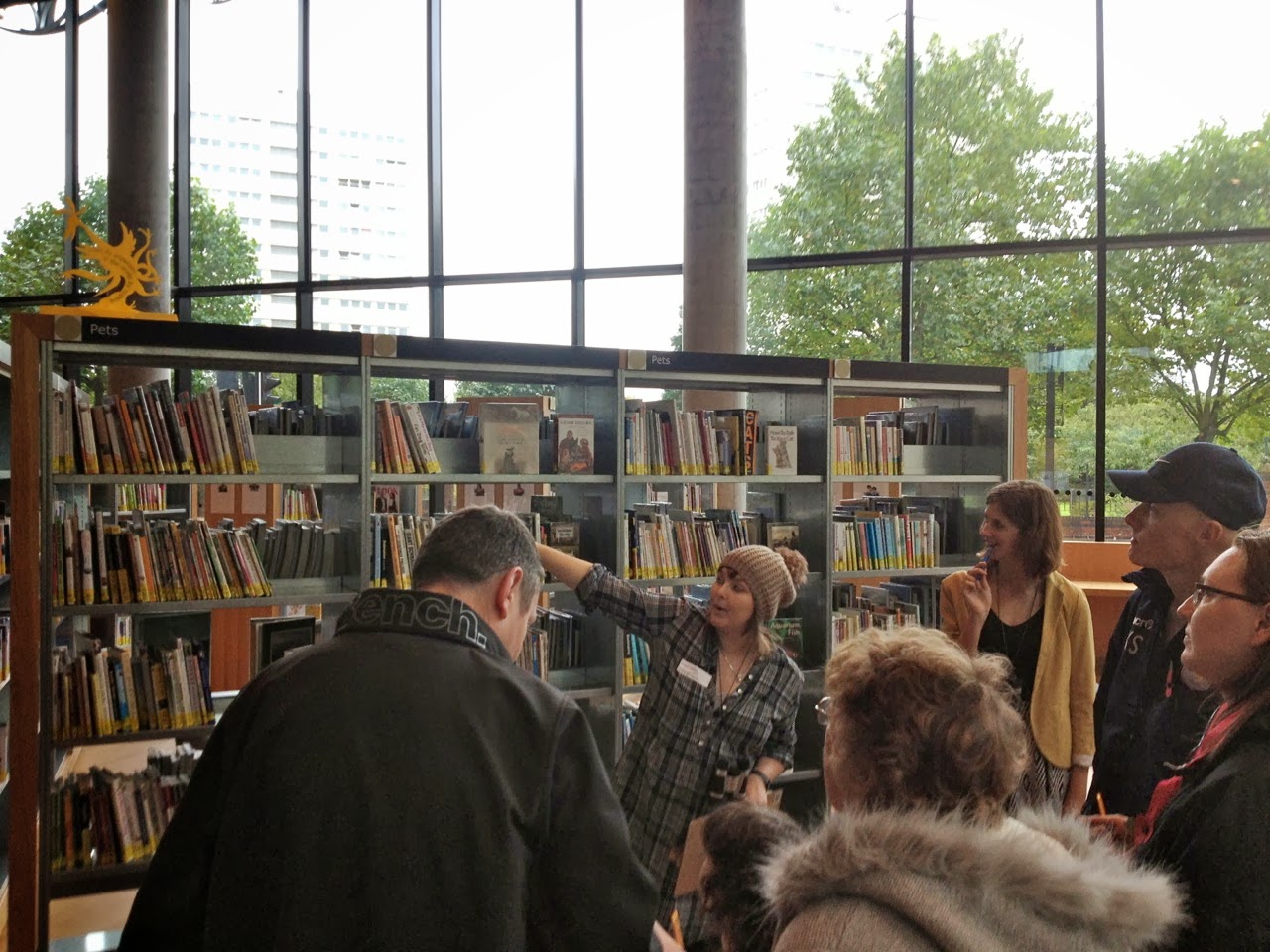