Over 1,000 artists descended on the seaside town of Scarborough on Saturday,23rd November 2013  to march, chant, make, talk, debate, and generally explore the importance of arts in our education system.
The Art Party Conference described itself  as an antidote to all other conferences, saying:
' It’s not aligned with any political party but an opportunity to celebrate art and artists and acts as a forum for debating the future of the arts in today’s climate of spending cuts and changes to the education system. The Art Party hopes to influence decision makers to listen and to think again.'[i]
The day began with a growing collection of banner wielding artists on Scarborough Beach, who soon set off on a march up the beach to the impressive Spa Complex, corralled by artist Bob and Roberta Smith, who rallied the marchers with a chant of 'Where are we going?' 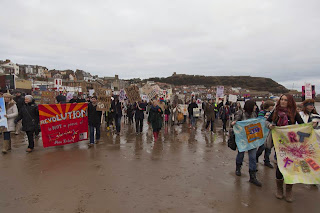 Scarborough, 'Why are we going there?' at which point the chanting would break down as the complicated answer was 'To better advocate the arts to government.' Which was too much for the motley collection of artists, students and the public joining the march. Laughter rang out, as chants about avocadoes and 'get on with it' were heard.
The day started as it went on, hilarity often giving way to the serious message which had brought such a big crowd out on a November Saturday. Yes, the Art Party Conference felt light-hearted, fun and at times surreal, but everyone there must have been aware that what we are really advocating is recognition of the value of arts in society and education. The threatened stripping out of art from the curriculum, and the very real cuts already taking place mean not only a loss of livelihood for many present, but also, potentially the reduction of much that is bright and good in life.
In current Education Secretary, Michael Gove's world, ideally what he describes as non-traditional subjects will be weeded out, and his Minister, Liz Truss, goes further to explain, "We are rebalancing the curriculum towards high-value subjects – in maths, sciences, DT, computing, English and languages." [ii]
The description of the more academic subjects as high-value, of course hints at the notion of non-academic equalling low-value, and it is precisely this which I feel strongly, needs to be countered. In creating a subject value system like this, the government threaten to leave great swathes of young people out in the cold, and for no good reason. A society where only the academic is seen as worthwhile, is a society lacking in imagination, creativity, the ability to think differently and ultimately is a much, much poorer society and life experience on the whole. Artists and art are already undervalued, but with 14% less children taking GCSE Art this year, the future for the arts in society looks bleak.
I know that 14% less GCSE Art students means 14% less free thinkers, 14% less creative minds and 14% less well rounded young people able to make independent choices. And this figure looks set to rise if the current government gets its way. It feels like this favouring of non-creative subjects has been done on the sly, but now that we have woken up to it, something must and is being done.
Much of the festivities of the day centred around the main hall, where an artwork by Bob and Roberta Smith took centre stage: 'An Open Letter to Michael Gove'. During the day Gove's image became the focus of various performances, speeches, actions and there was even a Gove lookalike, who gave a pantomime style speech to boos and hissing. 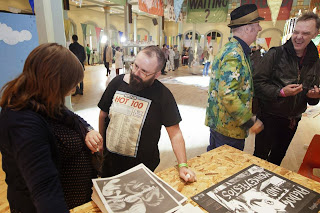 There were stands, artworks, performances and talks taking place throughout the day. I was at the conference with AirSpace gallery, where we 'Took A Stand' designed by artists Shaun Doyle and Mally Mallinson. The stand offered participants the chance to write their own Manifesto; very fitting with the day’s themes, and also a chance to tell people about Pigdogandmonkeyfestos – an exhibition of artists’ Manifestos to be held at AirSpace in May, 2014 - I marched with the other artists, smashed Gove's head in at the Goveshy, and even had some inspirational nail art at the Arts Admin stall. But in the back of my mind I did think a few times, there is a lot of energy here, but are we preaching to the converted? 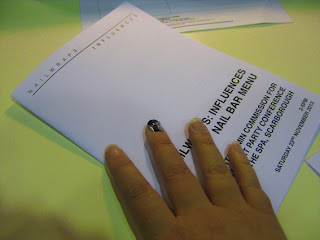 What is important now is how to build on the energy whipped up at the art party conference and see it is a catalyst for change: now that we all return to our busy everyday lives, what difference will one day in Scarborough make? How do we ensure the energy does not just dissipate?
One of the criticisms I heard voiced of the event was that it was all about Bob and Roberta Smith, using his connections to bring his famous art friends to the seaside for the day to celebrate his big idea. My view is that what we need now is big ideas, and we need people like Bob to use his artworld connections to gather support for this really important cause, so if that does involve ringing up your famous mates, then I'm all for it. Richard Wentworth was one of the big names there on Saturday, and he set out how important Bob and Roberta Smith's letter is. He made a public offer to meet Bob in London at a time and place of his choice to take a photo with Richard and the letter for the front page of the Telegraph. I hope it happens, and I hope that everyone in attendance, and the many other artists, and supporters of the arts that couldn't make it on Saturday see the Art Party Conference as a Call to Arms.
The Arts and Creativity in this Country are under attack and if ever there was a time to stand up for the arts, it is now. We have to get organised, speak up and speak out about the cuts.
So the question of whether the Conference has done any good will have to hang in the air for now, but what it did do was bring people together, to celebrate the arts, which is a very good start.