The Artist and The City 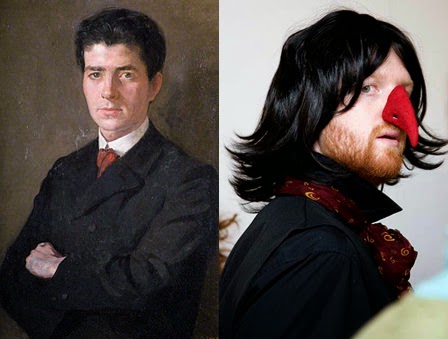 Image: John Currie, Self-portrait and Adam James, My Kind of People
I have wanted to curate an exhibition for the Potteries Museum and Art Gallery for some time, and it is happening in October this year.
I am working with Jean Milton from the museum to curate a show called 'The Artist and The City.'
It is so exciting to have been given access to the museum's fantastic collection. Yesterday we went into the museums underbelly, where there is so much amazing work that is never seen.
Cases and cases full of ceramics, paintings, workbooks.
The exhibition has 4 very important artists from the museums collection, with links to Stoke-on-Trent, and then for each of those we have selected an emerging or mid career artist to make an artwork in response to one of the artworks from the collection. We have identified artists that we feel have an affinity with each other. I am so excited to reveal the 8 artists to be included in the show:

George Cartlidge (1868 - 1961)
John Currie (1884 - 1914)
Margarete Heymann-Loebenstein (1899-1990)
Terry Shave
David Bethell
Adam James
Carla Wright
Sophie Bard
I am currently gathering ideas for a timeline to accompany the exhibition in the museum: which aims to be a comprehensive chronology of the arts and artists in Stoke-on-Trent. We also hope to commission an artist to work the content of the timeline gathered from the public into an artwork which documents the history of the arts in the city as a ltd edition giveaway for the show.
The show continues in AirSpace, as well with exciting commissioned works by David Bethell, Adam James, Carla Wright and Sophie Bard.

More details about the exhibition below.


AirSpace Gallery (ASG) and the Potteries Museum and Art Gallery (PMAG) are collaborating on an exhibition titled 'The Artist and The City' which explores the notion of the city of Stoke-on-Trent as a Creative City- considering the history of creative industries and artists working in the city - ahead of the Esmee Fairburn funded project, Artcity.

Artcity is a five-year artist-led programme in Stoke-on-Trent that aims to:
Improve the quality of place and life in the city for those who live here and
Create a new story for the city - modelling new ideas for the city's future.
The project in particular sets out S-O-T as a city which is really viable as a place for art and artists to thrive, providing opportunities for artists to access disused spaces in the city to make activity happen in new and surprising ways and places.

The exhibition takes as its focus and starting point the work of 4 artists, who are well represented within the Museums collection, and whose work is also identified as being world class.
The artists to be explored in The Artist and The City are:
George Cartlidge (1868 - 1961)
John Currie (1884 - 1914)
Margarete Heymann-Loebenstein (1899-1990)
Terry Shave (b1952)

The exhibition is a chance to showcase some beautiful, important works from the Museum's collection, with each of the selected artists having a series of works from the collection on display, revealing the history of these artists, their fascinating lives and connections to the city, but will also provide an opportunity for the next generation of artists to explore the artists and their works, and what it means to be an artist living or working in the city of Stoke-on-Trent.

The exhibition will select one work from each of the artists above, to become the starting point for a new commission for a contemporary artist with connections to the city of Stoke-on-Trent today. The curators of The Artist and The City have deliberately selected the artists, due to a perceived crossover or affinity with the works from the collection, and that those artists have lived here, or worked here previously, and therefore have a connection to the city. These newly commissioned, responsive artworks will be displayed alongside the artworks from the museum collection within the Art gallery at PMAG. The pairings are:

In addition the exhibition will continue to explore the theme of The Artist and The City through an exciting exhibition at AirSpace Gallery, which seeks to propose and imagine what the future Artcity may look like; exploring the city as a viable site for artistic endeavour, but also as a place where artists can live, work and prosper.


Alongside the exhibition there will be a series of events and activity which discuss the history of Creativity in the City of Stoke-on-Trent, and project forwards to the future Artcity. Details tbc.
Posted by Anna Francis at 11:02 PM