The community maker project (one of the British Ceramics Biennial 'World in One City' projects) has now launched and we have had 3 events so far. 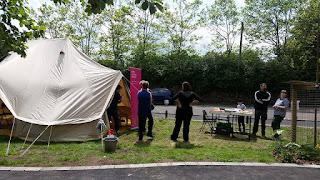 The first and last session planned to take place in the Portland Street Area, were designed as informal drop in picnic sessions - but the other 5 sessions were meant to take place in a local venue.
One of the major issues for the Portland Area community is the lack of an adequate meeting place. The shop, pub and community centre are all closed and boarded up - and so we had hoped to hold our events a little bit outside the area - at the Cobridge Coronation Club. In the end the club was not available, and as a result - we have had to create a temporary pop up workshop space, in the form of a large bell tent. 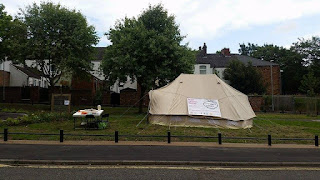 This has not been ideal - but certainly does bring into focus the real need for the lack of venue problem to be a top priority for development in the area. Part of our remit for the community maker project is to explore what the community needs to become successful and thrive - and we are finding out first hand just how much of  a hamper on community development the lack of a venue has been for the area.
That said, our pop up tent has proved to be a great space for a workshop - and has activated a newly developed green space in the area. 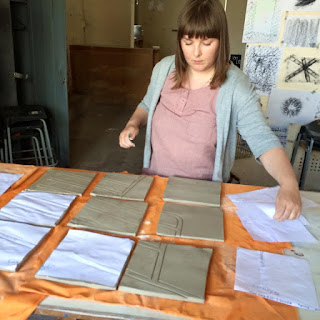 For our first session, which was due to take place on a Saturday from 12 - 3pm I worked with brilliant ceramic artist Alice Thatcher, who is assisting me with the project, to create a porcelain map of the area. We met at Spode Factory the day before and created our map, and tested the lino templates we would be using. 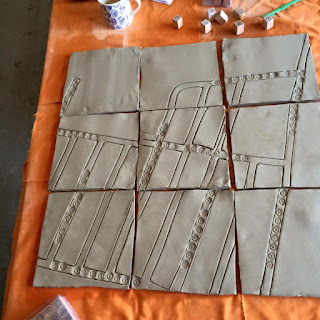 The lino plaques are based on the Victorian Language of flowers (which I have been using within my work for some time now). 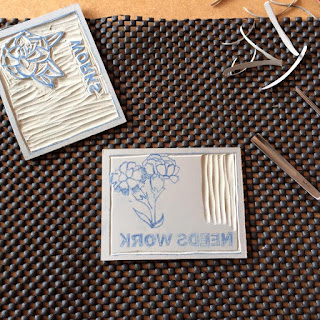 There are two plaques - one which has a design of a yellow carnation on it says 'needs work' - because in the Victorian language of Flowers you would give yellow carnations to express disappointment - and then a white camelia on the other - which says 'works' as the white camelia expresses perfection. 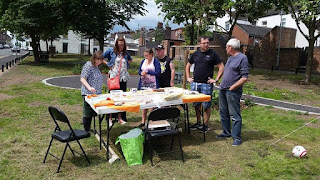 These were used at the drop in session to talk to people about the area - and ask them to say what works and what needs work here - which would eventually be added to our ceramic map, expressing a community's feelings about itself. 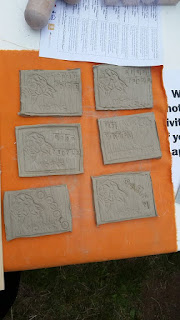 The session was also used to let people know about the other sessions - and invite them along. There was a lot of really positive thought about the area - with many people mentioning how friendly people are here, the location and proximity to city centre were mentioned, and the new developments with the green space and park were all described as positives. Things which needed work centred around fly tipping, litter, dog poo and some anti social behaviour and drug problems in the area - and again, mentioned a  number of times was the need for a community meeting place. 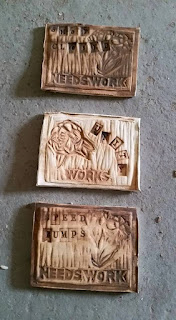 The fired plaques look great - and are now waiting to be glazed, before being added to the map, and potentially shown at BCB 2015. The first session was really good, and thanks to Alice Thatcher and Kornelia Herms who were brilliant help. 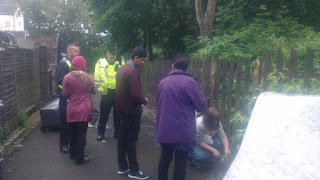 The next two sessions we have had were both on week days, which I wasn't sure how many people would be able to come. 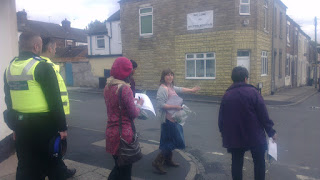 The first was a walk around the area - where we each had a map - and an idea to locate one good and one bad thing (physically) in the area, and then to select a plant from nearby to act as a marker for that thought - creating our own language of flowers of the area. 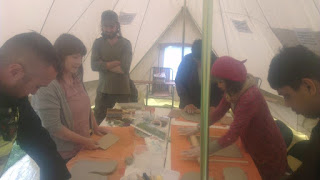 We then used the plants to press into clay, and while pressing them discussed some of the things in the area that are good and some bad - and also made an eco report on some of the many plants growing locally.

Then the next day we created Faces of the Community. Myself and Kornelia spent the afternoon on Wednesday after the plant workshop making lino stamps of eyes, noses and mouths to be used the next day. 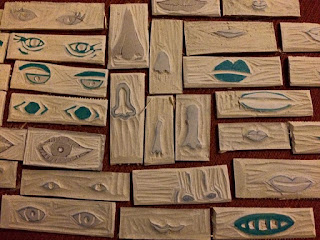 They were used to create an impression in the clay, and then coloured oxides and tools were used to add extra details.
This session was really fruitful, as we were able to begin discussion about how to move forward with community plans and aspirations for a community space of some kind. The night before I attended a steering group meeting, where the council asked if the community would be interested in taking on the old shop (currently standing derelict in the middle of Denbigh Street) as a community enterprise and meeting space, and we were able to offer to gather thoughts on this, and other community initiatives during the community maker project. 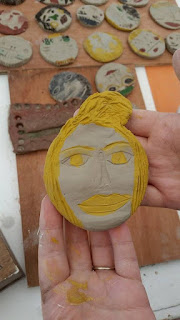 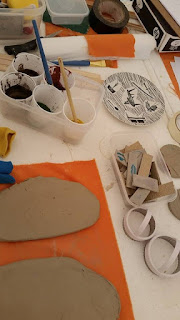 Then our final event locally for 8th August is planned as another community picnic event - and will involve the planting of a community flower bed (plus we will make some plant markers in clay) as well as the first community tea party - which the Portland Street Community Group will be helping with. So far the project is going extraordinarily well - and though it is a lot of work - I am really enjoying it. 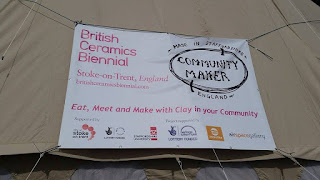 We have generated lots of imagery, which could potentially be used on our community maker table ware - and then, if the coincidence about Enid Seeney (Homemaker Designer) being trained at Spode wasn't enough - it also turns out that she was once courting Andrew (my partner)'s Dad! June (Andy's Mum) was shocked to discover the links we were making to Enid's pattern, and told us this amazing piece of family history and connection - she said she has a super 8 video of Enid and her husband paddling in the sea in Devon, from a visit Andy's Father made years ago. I hope we can dig that footage out - she also mentioned  that it had been a shame that Enid had not gone back to ceramics after being married. I am sure that this part of the project will become important, but at the moment - it is just so strange!
Posted by Anna Francis at 4:31 PM