I have been thinking a lot recently about the direction my work is going in, and the interests I am currently exploring - many of which involve urban nature - and attempting to create spaces for advocating the inclusion of green spaces within developments in cities. This is a direct result of my surroundings; as with most artists I am very influenced by what is happening around me - and in fact this leads my work to evolve simultaneously with the evolution of the city. A few years back, when there was a lot of housing renewal taking place in the city, my work explored that - aiming to uncover the human aspect of housing renewal with a body of work around the demolition going on in the city (which culminated in the Indefinable City Exhibition at AirSpace in 2007 - and my work 'Terrace.') 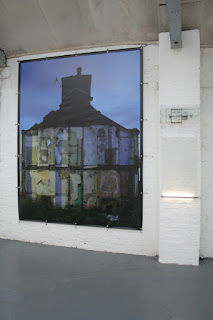 I was interested in the way the sites would change so quickly - houses there one day, then rubble, and then freshly tilled soil - almost calling out for wheat seeds to be sown in the creation of urban harvest fields. I did visit some of the sites to spread seed back in 2008 - one of those visits was a result of a £1 commission - from The Eccentric City Newspaper and is documented on my blog here. 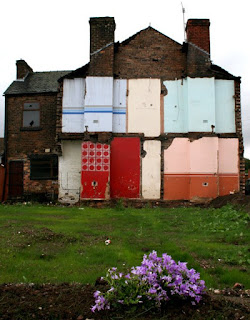 Back in 2008 I was already thinking about these sites as potential community assets - and instead of regarding Brownfield Sites as eyesores, was already considering that their interim use could be much more fruitful. Then - as the sites of demolition lay untouched for a number of years, I became more and more interested in the way that the sites develop over time - and the activity that begins to happen on the sites. At first, the sites become used by people as places where usual rules are suspended, strange objects and collections begin to appear - evidence of wayward activity taking place. I documented this stage - and one image in particular - taken on the Cinema site became quite successful for me - included in a few exhibitions and as a postcard, it sold quite a number. 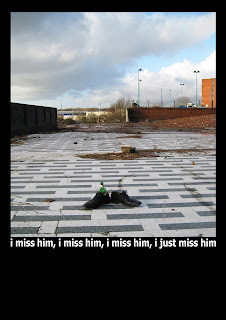 As the sites became more and more overgrown with plants, they have become really richly abundant nature havens, very important within the ecology of a city.
Back in 2012 - while in Japan, I was considering how I could start to look at, and bring others to look at the potential of the sites in relation to the plants and flowers growing there, and to bring people to recognise just how beautiful some of these sites have become.
On my return to the UK from the residency in the mountains, where I focused some of my time on learning ikebana techniques, I visited three of the larger Brownfield Sites within the City Centre of Stoke-on-Trent, with the view to create 3 Brownfield Ikebana.
The first was the Abbatoir Site: 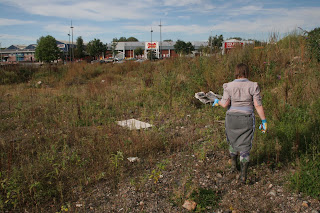 The Abbatoir had been demolished less than a year before this - but the plants on the site had very quickly taken hold - and in fact in this area I saw a number of dragon flies and damsel flies. The rich variety of species found on this site was quite astonishing - and I wonder whether it was anything to do with spoil from the abbatoir over the years, contributing to very fertile soil. 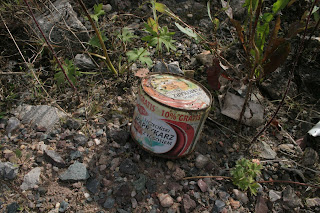 On each site I foraged for a vessel - to be used as a vase and flowers (weeds?) and other foliage for the floral display. 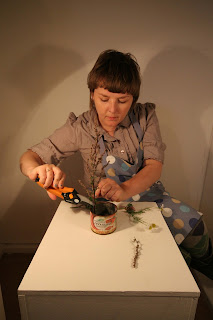 I then returned to the gallery to turn the collected objects and weeds into Ikebana. 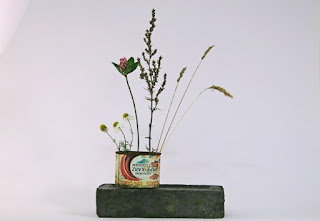 The other two sites which I visited were the Greyhound Track: 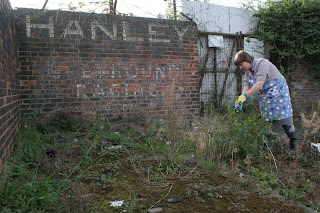 Where there is a real abundance of sedums, succulents and other alpine plants.This is a quite large, and well established site, a space which has been empty for quite some time. 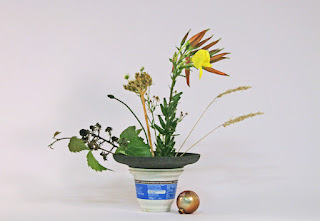 and then one of my favourite Brownfield Sites in the city centre - the ABC Cinema Site, where there are some wonderful buddleia (of various colours) - but also - forget-me-nots, woad and weld. 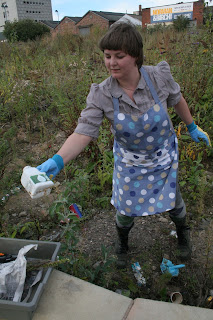 This site has been interesting to follow - as it is such a public site - right next to the New Tesco development - but which for years Tesco refused to admit belongs to them. The site is now up for sale - so maybe will see development soon, as a whole new business development has opened up over the road - which may bring new interest. 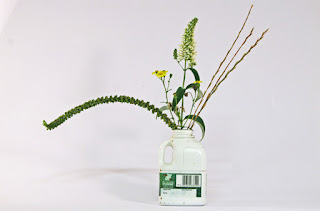 The ABC Cinema site has a lot of choice for vessels - because people visiting Tesco tend to sit on the wall and consume their purchases, before lobbing them down onto the site - there is quite a mound of rubbish there these days.
Alongside the Ikebana - I created a 'How To' works instruction, so that other people can make ikebana if they want to. 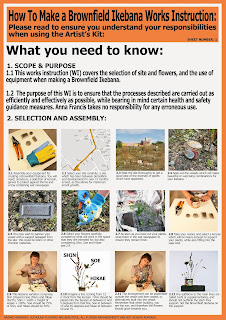 And a Brownfield Ikebana workshop in 2012 invited conversation with others about the sites - and the rich materials to be found there.
Where we are in 2015 - we are seeing quite a lot of these now flourishing, abundant Brownfield Sites being developed across the city - so what have been quite important interim nature havens - are slowly disappearing. The abattoir site - which was so rich and fertile, is now just a very small triangle of land between Tesco and the new Premier Inn, perhaps the triangle is a bit in between that noone knows who owns. As these sites are developed, the local, fairly newly established ecology is being upset - I have not seen a dragon fly around since the Premier Inn was built - which is a great shame. Stoke-on-Trent is said to be one of the greenest cities - and I think that the Brownfield Site has a really important role to play in that. For just over a year then, I have been thinking about how I might start to advocate that developers consider including a permanent 'Brownfield Plot' in any new schemes - incorporating these beautiful oases of green into their plans, and providing a permanent home for nature.
I developed a proposal during the 'Beneath the Pavement' project which AirSpace led on, working with the City Centre Partnership, which focuses on the idea of Brownfield Flora, as an advocacy document for working with developers. I hope to put this into practice in the coming years, and will looking for opportunities to do that. I had hoped to revisit the Brownfield Sites in the city - and see how they are developing, and was recently asked to take part in the Cryopreservation Exhibition at SYSON project space in Nottingham. Cryopreservation is an exhibition curated by Division of Laboour and looks at the rich history of man's relationship to flowers. I was really pleased to be asked to be involved - as Heather and Ivan Morison are also in the show, whose work I really admire.
This was a great opportunity to revisit Brownfield Ikebana and the 3 sites - to see how they are changing and developing. 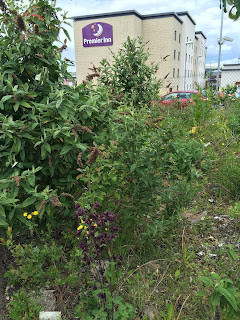 The biggest change was on the site of the Abbatoir - back in 2012 this had been a fairly large and abundant site, but today there is just a small triangle of land remaining undeveloped, between Tesco and the Premier Inn. 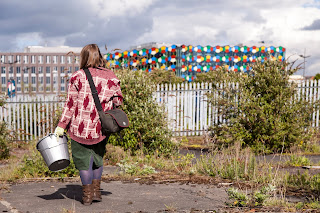 It is still, however, rich in a diverse range of flowers and grasses - and able to provide a good selection for the Brownfield Ikebana: Abbatoir, 2015. 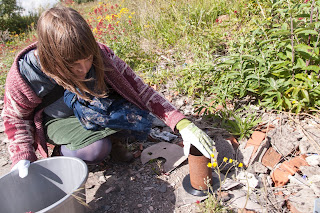 I visited each of the 3 sites, and in each case, collected weeds and rubbish from the sites to act as vessel and flower selection for the ikebana, before returning to my studio to assemble the 3 new Ikebana for 2015. 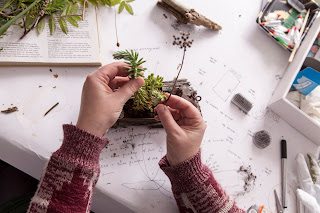 Although these three sites are within a 5 minute walk from each other the difference in flora to be found on the sites is significant - and in addition, different types of materials are available for the vessels. The Abbatoir site has a good variety of more readily recognised flowers - things like aquilegia and large daisies, which may have escaped from a garden somewhere. 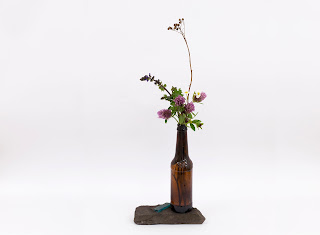 Brownfield Ikebana: Abbatoir, 2015 is an omission variation ikebana - where the line for man has been left out of the display (usually there are three main lines, representing earth, heaven and man in basic ikebana displays.) 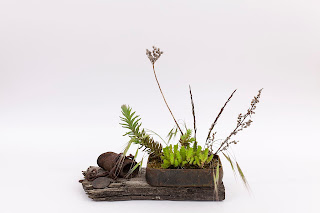 Brownfield Ikebana: Greyhound Track, 2015 is a traditional Ikebana display and incorporates rusted metal elements collected from the site - the vessel is a shallow tin (tobacco tin) and there is a piece of salvaged pipe and chain, and a penny. The floral selection includes a couple of different succulents - one, a well established sedum. 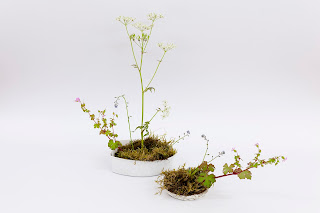 Brownfield Ikebana: ABC Cinema, 2015 is a divided variation, where the 3 main lines are split across 2 vessels (one, a luncheon meat container, and one a wooden door knob) and has a very subtle, light coloured scheme, not unlike the 2012 version. The very delicate flowers selected include forget me not, herb robert, cow parsley and moss.
The sites are still beautifully rich in source material and I hope to do more with the Brownfield Ikebana works in the coming year. 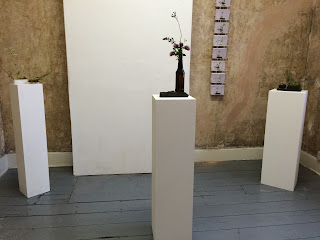 Above and below, works installed at SYSON, Nottingham as part of the Cryopreservation Exhibition. 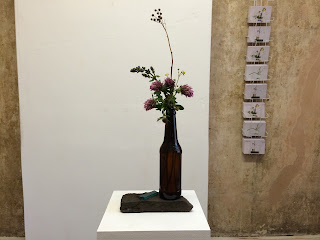 The fresh ikebana displays were exhibited alongside postcards of the 2012 Ikebana.
Posted by Anna Francis at 10:14 PM