Spode Rose: Landscapes, Designs and Thoughts from the Public 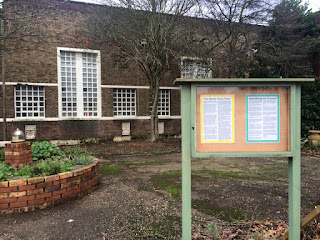 The results of the Spode Rose Garden Consultation are in, the Council report being amazed by the response, mentioning that there were more respondents for this questionnaire, than when they consulted on the poll tax.
The level of interest is testament to how well loved this space and the factory are within the hearts of the public - what is also really heartening, is to see the number of people who have expressed an interest in being involved with the garden in the future - and perhaps potentially forming a 'Friends of' group for the space.
This is really key to the sustainability and long term plan for the space - The council have committed to spend £12,000 on the garden, all of which will go on landscape plans, landscaping, treeworks, restoration and plants. It is imperative that this investment is not wasted - and therefore finding custodians for the space long term is a real concern for us, as we don't want the work to be done, only for the garden to return to its previous abandoned state.
For us at AirSpace then the idea of a programme of engagement and public art works seems a great way to involve people (so it is this part of the project that we will have to look for investment for.)
What is really clear from the questionnaire is how important the heritage of the garden is to people, with many mentioning that the garden should nod to and incorporate Spode designs and history - something which myself and Dawn Mayer (the council's Landscape Architect that we are working with on the project) are keen to explore this further.
There are a number of key elements that we hope to include in the Spode Rose Garden's future design, but we also hope to retain as much of the current layout and features as possible.
Conversations based on the questionnaire and our own thoughts about the space centre around the following principles currently, which we will be taking now back to those interested stakeholders for cross checking:
- The garden's history as a rose garden is something we hope to build on, showcasing the new Spode China Rose which has been the central motif within the project.
- From the questionnaire and subsequent design conversations, we are looking at a design which includes and references Key Spode Patterns: ensuring that the garden references the Factory's rich heritage, but is also able to be a learning resource about the history of Spode.
- Spending some time looking at the current layout of the garden, we hope to accentuate the series of circles/semi-circles around the space, seeing these as templates for referencing the Spode Wares (A series of plates in the space - delineated with landscaping features, and referencing the plants and fruits from Spode wares via planting schemes and other features.)
- Tree works are a priority in the garden - as some of the trees have a lot of dead wood and others are damaging neighbouring buildings.
- A number of people have mentioned the railings - and needing these to be done up - this would take quite a large part of the council's £12,000 budget, but would be something that would be really beneficial for the future of the space.
- One key individual who has a real interest in the Spode Site and has done a lot of work in keeping much of the rest of the factory site looking presentable with plants and flowers over the years, discussed the idea of a second gate into the garden, which would create a sense of being able to walk through the garden (a nice idea) and which Dawn will look into for costs.
- The council has a commitment to including edible elements within all green space development, as part of their Sustainable Food City Initiative - something which we are also really on board with at AirSpace, and in addition to this a number of respondents to the questionnaire mentioned edible planting as being desirable. This offers a real opportunity for the design of the space to reference two key artistic movements which are going on in the City (and beyond) at the moment, which have seen two key themes emerge in how artists and art organisations are working: projects and works which use food and growing as core interests.
The Spode Rose Garden thematically then, can talk about the growing and sharing of food - through the design and planting schemes, we create a space where it is possible to pick and eat your lunch, and the space itself references the ceramic wares we are all familiar with eating from.
The next stage for the project is to hold a meeting, where we invite interested individuals to hear about the project, and to talk about how we move forward as a group in ensuring the future sustainability of the garden, as well as inviting people to input into the design stage, by suggesting which of the Spode Wares they would like to see referenced in the garden.
We hope to do this in early February.

For now, some interesting statistics and date from the Questionnaire:
out of 108 respondents answering the question 'Should the Garden be Improved?' Two were unsure, only one said No, and the reasons were to do with worrying about the work being vandalised afterwards. (That means that 97% said Yes the garden should be improved.)
When asked 'what do you like about the garden?' 13% of respondents said 'not much'.
10% mentioned the willow tree and 12% said they liked the links to Ceramics and the use of ceramics within the garden - and this is backed up with many more people expressing the need for the design to reference ceramics. It was interesting that a number of people felt that the feeling of privacy/secret garden aspect was really positive, something that I hope we can build on.
In giving their ideas a number of key themes are emerging which are informing the direction for the design:
9 people mentioned artworks and sculpture.
21 people (19%) mentioned seating.
5 people talked about edible plants as an idea.
11 mentioned a water feature.
11 said that the planting should support wildlife and birds.
9 said that the ceramic heritage should be referenced within the design and a couple of people thought that a second entrance would create a walk through, and a handful more thought that a sheltered area would be good, so that the garden can be used in all weathers.
In relation to the planting schemes within the space:
44 people talked about the planting considering wildlife, and being bee and bird friendly, with another 6 people talking about planting considering using native wildflowers within the garden.
22 people mentioned scented plants, with a further 6 suggesting a sensory garden.
16 people mentioned that edible planting could be incorporated, but 3 people said No edible planting.
A few people mentioned the idea that the planting could reference Spode in some way, and a few more said they would like to see more roses in the garden.
27 people talked about the planting including some evergreen, but also that interest throughout the year should be considered - this is in keeping with providing a space for pollinators and birds (as we found with the Bee Friendly Garden) as there is a real need to provide year round support for our birds and bees - so this is something I would be really keen to look at.
4 very sensible people mentioned that the planting should be low maintenance.
In terms of maintaining the garden long term, many people talked about volunteers (44) and that to set up a Friends of Group would be a good way forward (7) something we are now looking into, but a lot of people thought that the council should maintain - which unfortunately is not likely to happen, hence the need for engagement from the community.
Of the 108 people that filled in the questionnaire 17 people said they would like to volunteer to help with the garden in future - which is brilliant.
Posted by Anna Francis at 2:12 PM