Stoke-on-Trent: A City on The Up 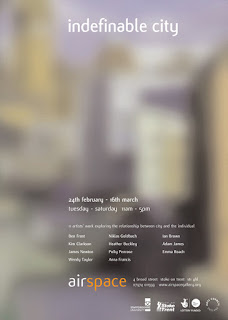 Since I returned to the City in 2005, the city of Stoke-on-Trent; my home, has changed immeasurably. Like many artists, the place I live leaks into, influences and is often the subject of my practice and research. The change happening in Stoke over the years has been frighteningly fast paced: both in terms of the deindustrialisation and demolition which seemed to be everywhere around the time that I curated 'Indefinable City' at AirSpace Gallery in 2007 and in the last couple of years in the pace of development, in terms of housing and business investment.
Much of the change has been a result of top down decision making (good and bad) in relation to the housing renewal, and clearance, and the various initiatives and projects to regenerate which have been variously successful.
What is particularly interesting is the growth in the creative industries - and in particular the power and the growth of artist led activity in the city.
Within my practice as an artist, and research as an academic, I have been interested in the role of artists in regenerating the places they live and work since the Indefinable City exhibition of 2007 - and have spoken about, and lead projects which explore this since then; so I was delighted to be invited as a speaker for a panel discussion at the V and A, on 30th October - during their monthly 'Friday Late' event which was exploring the theme 'The Potteries'. 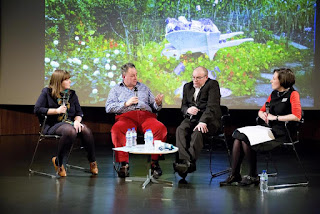 Image Copyright to V and A Official Photographer
The panel discussion was exploring 'The Future of The Potteries' and was chaired by the V and A's ceramics curator Olivia Horsfall Turner, and joining me on the panel was Steven Moore (Director at Middleport Pottery, and one of the experts on the Antiques Roadshow) as well as  David Proudlove from Urban Vision (also a writer for The Sentinel.)
Thinking about the discussion on the way down to London, what I really wanted to do was to present Stoke as the city which I know; one with its own share of problems, but a city with so much potential - so much going for it. In many ways, as an artist living in the city these past 10 years, I have benefited from the particular context here - there are so many gaps - and as artists, what we are really good at, is recognising gaps and seeing them as opportunities to make things happen. The things that I have been able to do, in terms of curating, and making projects happen, just would not have been possible in any other city. Over these ten years I have seen Stoke-on-Trent talked about from within the city, but also in National Press as a failing place, somewhere that no one wants to be, the city featured regularly in 'worst place to live,' and 'unhappiest city' polls. In the past 2 or 3 years however, the way the city is described, and the types of polls we are now featuring in have shifted dramatically. Suddenly we are featuring in 'Best Cities to raise a family' polls or 'Fastest Growth' polls. In addition, there are many more positive news stories coming out of the city than ever before. The Panel Discussion then, felt like the perfect time to really begin to spread the positive word about the city - and I was very happy to be part of that. 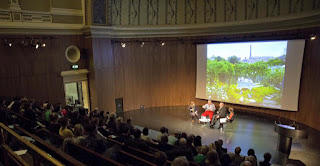 Image Copyright to V and A Official Photographer
It was very interesting to talk about the role that art and arts organisations are having in the city, but also to talk about the role of the University - in celebrating the City's Ceramic Heritage.
At the end of the talk a number of people stayed behind to let us know how refreshing and heartening it was to hear such positive news from the city. I really feel, along with many others, that this is an important moment for Stoke.
We all felt that in the next 5 years there will be a lot of development in the city - and that the future for the city is really looking good. Since the discussion, the official announcement has been made that Stoke is to bid to be City of Culture 2021. This would probably have been unimaginable 5 years ago - I look forward to looking back in 5 years time and seeing how much further we have come.
Dave Proudlove wrote up his take on the discussions here:
http://www.stokesentinel.co.uk/Dave-Proudlove-Ceramics-Stoke-s-new-industrial/story-28148812-detail/story.htmlhttp://www.stokesentinel.co.uk/Dave-Proudlove-Ceramics-Stoke-s-new-industrial/story-28148812-detail/story.html
Posted by Anna Francis at 2:00 PM