Stoke-on-Trent is bidding for City of Culture 2021, and as we enter 2017, we know that all content generated on social media, and via other outlets will be scrutinised by the judging panels, as they decide, first who to shortlist for the award, and eventually, who should be the winners. This tells us that from January 2017, we need to make sure that the breadth and depth of culture (which we know is going on sometimes loudly and proudly, and sometimes more quietly but none-the-less importantly) in Stoke-on-Trent is being captured, and shouted about.

The city of culture competition has been shown to really improve the reputations of those that win, but also, shows real ambition from those bidding, and it is this which is so heartening about the Stoke-on-Trent bid, a sense of worth and value ascribed to the culture here, is seen by the fact that the city feels in a position to throw its hat into the ring. This, along with many other initiatives and projects across the city, is changing the way the world views Stoke; so all for the good.

Stoke-on-Trent is a cultural city every day of the year, not just while we are bidding for the City of Culture accolade, every day across the city, people are making things: pots, artworks, music, changes, and many other things - and across the city we have different ideas about culture; what it is and how it connects to our lives. This project, #365daysofculture, aims to capture some of that, but also aims to support people from across the city to shout about what culture means for them, and how they are consuming, making and defining culture in their own lives, providing a platform for people to show what culture is, and a way for everyone to be involved in the bid.

We know how important it is to show culture from all quarters and levels across the city, and with this simple social media project, everyone from across the city can be involved in defining and capturing culture for ourselves, something that we know, from speaking to people across the city about the bid, that people want to be involved in. This project is all about enabling everyone to be involved, and rather than waiting for permission this is all about everyone who wants to, being able to have their say on what is important, and what should be represented in a city of culture bid from Stoke-on-Trent. With this simple idea, anyone can have an imput into the bid.

The idea for the project came from a conversation with Paul Williams, from the Stoke-on-Trent City of culture team, about the way that winning cities will need to put together 365 days of cultural programming, which will operate at a variety of levels, from the large scale cultural spectacle, to the smaller scale, community led event. Arguably, there is already culture happening across the city 365 days of the year, but we are quiet about it, or lack the capacity to really demonstrate the quality of it, or simply lack the resources to make the most of it. We know that to win City Of Culture would help us to really sing about what is here already, but also to build on that, build capacity and build resources; this project aims to start with what’s here and what’s happening already, and what can be celebrated right from day one of our bidding year (2017.)

Who can take part? And how do we build momentum?
Anyone can join in, simply by using the #365daysofculture with the @sot2021 moniker, but we know from running similar campaigns, that we need to build momentum to get people involved and interested in taking part. To begin to get people involved I am contacting some key individuals, who I recognise as being important cultural catalysts, (with brilliant and far-reaching networks) and ask them to be the ‘early adopters’ of the project. These are people suggested by the campaign group, and other people I think have something important to say about culture in our city, but importantly, this is just a start - and the next step is for those people to hopefully want to involve others in the conversation about culture in our city, sop that we really build a sense of a multi-layered city of culture.
From week one we will invite our cultural catalysts to adopt the week and tweet/facebook/instagram their 7 days of culture using the #365daysofculture, in addition we will ask them to identify people from their networks to also take part; creating an accumulative social media campaign, which begins to get a real sense of the cultural activity happening across the city, in all of the six towns. Though they will be asked to share at least one post per day during their 7 days, they will also be invited to continue to use the hash tag throughout the year, whenever they feel something cultural is worth capturing to add to the conversation around Stoke's bid.
The aim is that after a few weeks of leading cultural catalysts generating the documentation of culture across the city, others will take up the mantel and the project will begin to self-generate content. By the time the judges look at the social media campaign coming out of Stoke's bid in April, there will be a real sense of the city getting behind the bid, demonstrating the variety of cultural activity taking place, from buildings, green spaces, factories, football terraces, schools and streets across the city.

How will it work?
At the end of December I will invite a handful of key people to photograph themselves and their surroundings each day of the first week of January, stating what they are doing, and where for example; 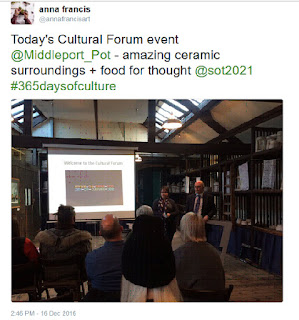 Image: Example of how a #365daysofculture tweet may appear.
I imagine people will photograph events, activities, places, objects - anything from across the city which could be identified as cultural. They could be photographing a visit to the football, a night out at the theatre, breakfast oatcakes or even their day at work - and everything in between. They can post video, audio and images, as long as they always use the #365daysofculture and @sot2021 their content will be picked up and shared as part of the campaign.

I will aim to contact a handful of people to look at week one (January 2017), who will I hope, then invite others and then I will involve others as the year progresses.
Posted by Anna Francis at 6:22 PM