Back in 2013, Andrew Branscombe, Glen Stoker and I embarked upon a mission: to see an abandoned garden in the heart of the Town of Stoke transformed. Details here about the history of the project. 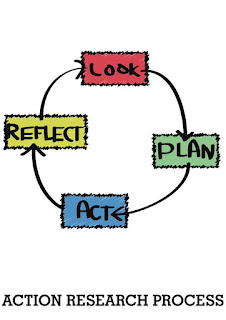 Using an Action research approach, we worked with a ceramic flower maker (Rita Floyd), and a rose breeder (Gareth Fryer), to create a new species of rose, which would draw attention to the abandoned garden, and cause people in the city to question its state. Our dream was to bring together the people and resources necessary to see the garden transformed, and more, to work together with others to ensure the future sustainability of the garden.

In 2015 a Councillor noticed what we were doing, and towards the end of the year, we built a relationship with the city council, who owned the garden, to work together to secure funding to form a group and to renovate the garden.

A Friends of Spode Rose Garden group was officially formed in may 2016 - but a few months before that, the group had already started working together on a consultation with the public, and then on the physical transformation of the garden. The consultation told us that people were keen to see the heritage of the Spode Factory reflected within the garden's design, and as a result the landscaping and planting represents some of the most popular Spode patterns.
We have the Willow Pattern end of the garden, which was relatively easy, as there is already a huge and beautiful willow tree in the garden, but this year we decided to develop the other end of the garden, next to the Sub Station, using the Blue Italian pattern as a starting point, as this is one of Spode's most popular patterns. 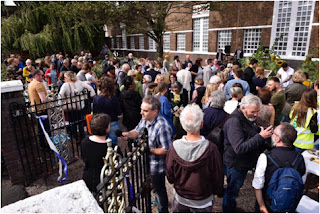 Spode Rose Garden Launch September 2016
As well as developing the garden for these past years, and since formally setting up, the Friends of Spode Rose garden have organised and delivered a series of brilliant events within the garden over the year - which have brought new visitors and many conversations about the role that individuals can play in developing the places they live. 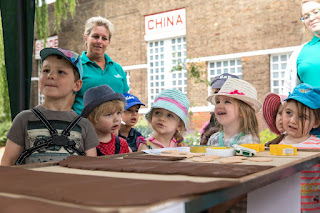 Sunflower Party, June 2017
Through these conversations we have realised what a fantastic example of people power the Spode Rose Garden has become, and so we decided to spread this story a little wider, by taking the Rose Garden to a national platform. We applied to RHS Tatton, in the blooming border section, and were pleased to be able to develop the design for the Blue Italian Border for Tatton, with a view to moving the border to the Spode Rose Garden after the show. 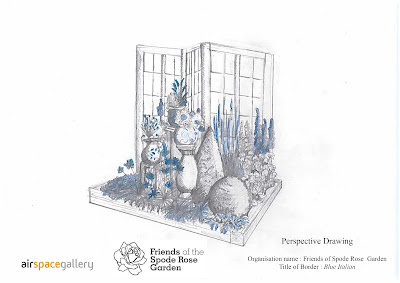 Dawn Mayer, one of the Friends of Spode Rose Garden group, and handily a landscape designer for the city council led on our design for the border. Different members of the group brought their skills, time and muscle to help make the border a reality - 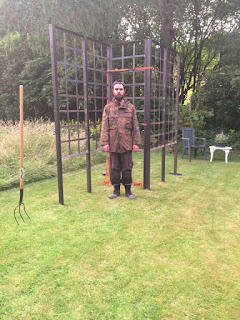 with Andrew Branscombe building the framework, and Jo Ayre leading the group to create the ceramic plinths, 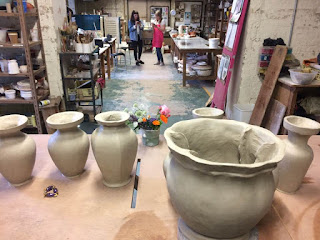 made from moulds from the Spode Factory, and also creating the blue italian tiles for the frame 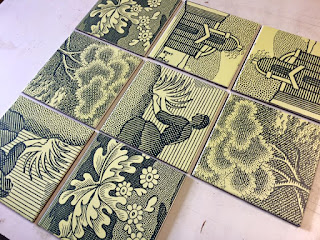 - it was a real group effort.
The overall effect of the sculptural elements, with the blue and white planting was really beautiful, with everyone lending a hand with the installation. 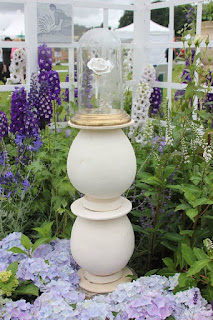 Each day of the show the friends of group were at Tatton rain or shine, talking to people about the Rose Garden and the city's resurgence, and inviting people to come and see the border for themselves within the newly renovated garden during the British Ceramics Biennial later in the year.
It was amazing the conversation we had over the week with people about Stoke-on-Trent. People told us often that they used to visit Stoke but hadn't been for a long time. A lot of people have committed to visit, and in fact just this Friday, we met a lady in the rose garden that we had met at Tatton, who had no idea the garden was there. 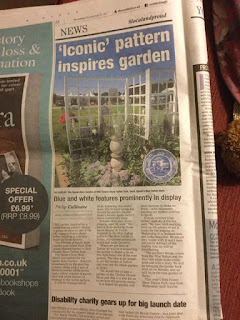 Advocacy for the garden and the city is so important, as we see the city strive to change its reputation. What I know, from taking part in this project since 2013 is, that you can have an idea for something good and positive, and here in Stoke, you can make it happen. There are people here who will do it with you, if you really have the commitment to want to do it. We have learnt so much over the past few years of the project, about gardening, about plants and most of all, about the power of people to make positive change for their city. It has been an immensely rewarding project to work on, and RHS Tatton was a real moment to celebrate the achievements of the group, and we even won a medal! 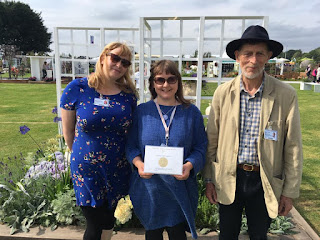 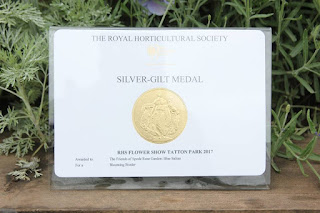 Thanks to various members of the Friends of  Spode Rose Garden group for their photographs, documenting our activity.
Posted by Anna Francis at 12:31 PM

Hello Anna-
I know about your work because I have been following the Ceramics and it's Dimensions project and the work of BCB... but I know that really folks like you and me are really what make the wheels turn in community art projects.

François Matarosso suggested I contact you about a talk I am giving at the upcoming NCECA conference in USA. (National Conference for the Education of Ceramic Arts). I finished my masters in community arts at Goldsmiths in 2013 but have been travelling around the world making art with community since 2001.

Dena Bagi has invited me to the opening event of the BCB will you be there?
Would be great to meet you and share international stories on working with clay in community and the broader goal of doing right work in the world.
till merry we meet, Sharon Virtue.