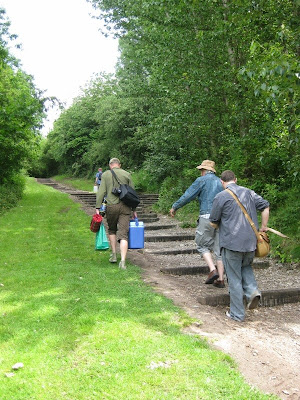 So, yesterday we all met at a secret location somewhere on the site of the 1986 Stoke-on-Trent garden festival. We were armed with picnic stuff, trowels, seeds, flowers and an apple tree.
Each participant on arrival was handed a map, packet of forget-me-not seeds and instructions, which included details of points of interest to look out for on the Festival site. It was a trek up the woodland stairs to our secluded picnic site, where remnants of some sort of structure and walled garden were evident. We set up the picnic and decided to build up our strength before getting on with the serious business of planting. 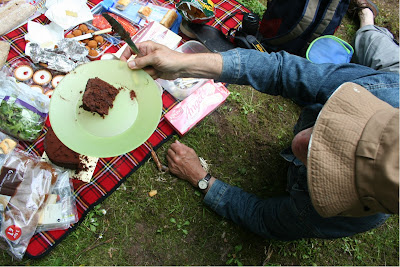 Chocolate cake and strawberries were passed around (along with many other foodstuffs) and we enjoyed the beautiful woodland setting, planted back in '86. We picnicked in the area known as the Woodland Ridge during the festival.

While eating our picnic we looked at the guidebooks and Landscape Design magazine, which was all about the festival, and discussed site and people's memories of it. Mark and Rob had been to the festival as kids, and Mark had brought along his Mum's photos of the event, Bernard had brought his own kids to the festival and Kate's Dad and Grandad had had a stall at the festival. It turns out that the site is as much fun for kids today, as it was back in '86. 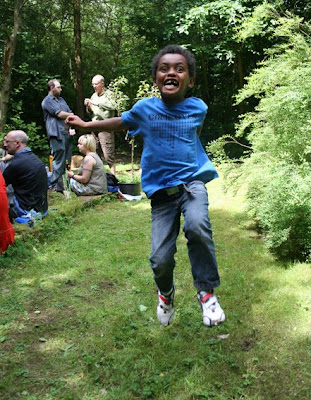 After our meal and discussion we got on with the planting. The plants selected had all been previously planted at the festival. My seedlings from the exhibition were very small, and only the asters were really viable for planting out, so we added some petunia and Monkey musk bought for the purpose. 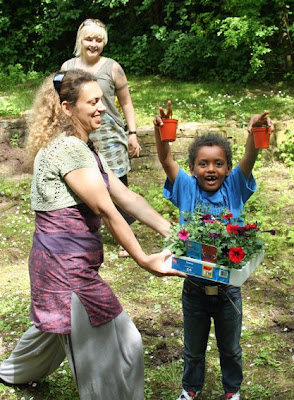 We selected a spot by a zig zag wall, as the wall created a bit of shelter and a nice focal point. Then we all got our trowels out. 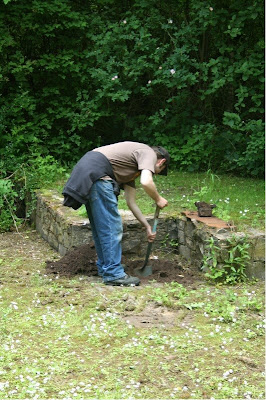 Andy made a nice big hole for the tree. Then we gave the roots a bit of a shake up. 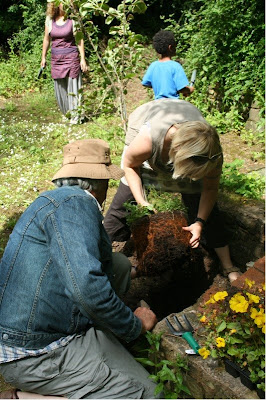 Before planting the apple tree. 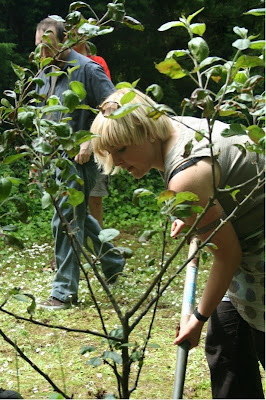 The tree got a good watering, even though we were due rain. 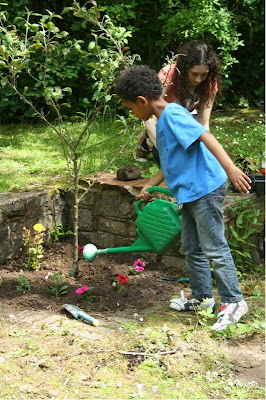 And everyone got stuck into planting the flowers out. 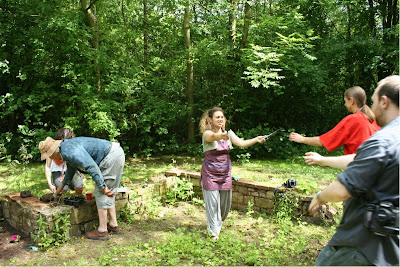 There was a lot to do. 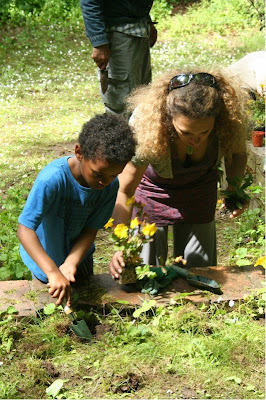 But it wasn't long before our secret corner looked beautiful. 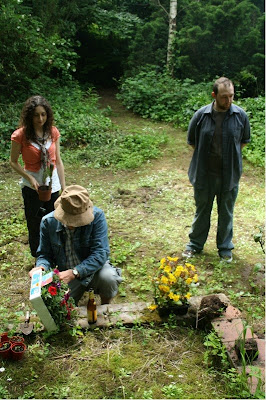 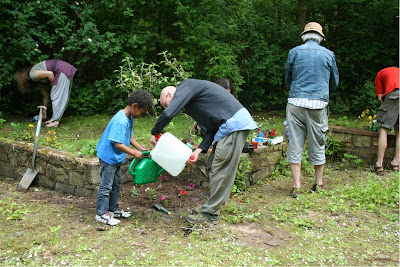 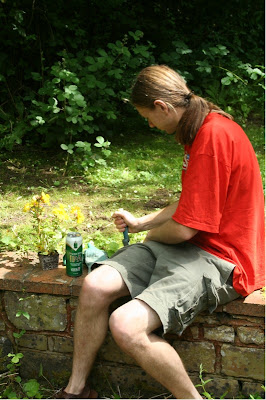 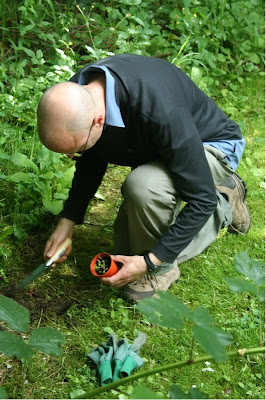 Once we had finished we toasted our new garden with elderflower bubbly. 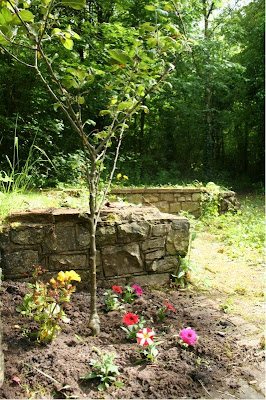 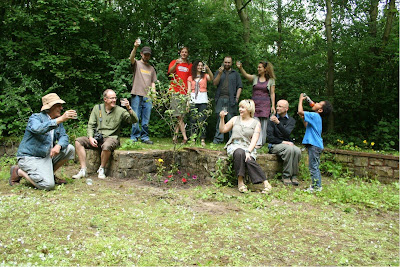 After we had made the garden we took our maps and went to explore the site. Everyone got really involved in figuring out the remnants. 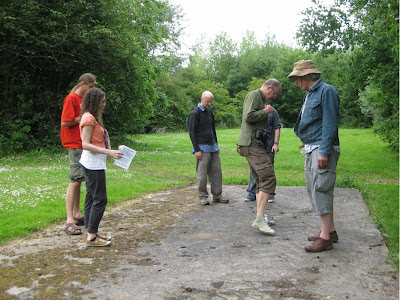 There were big squares of concrete. 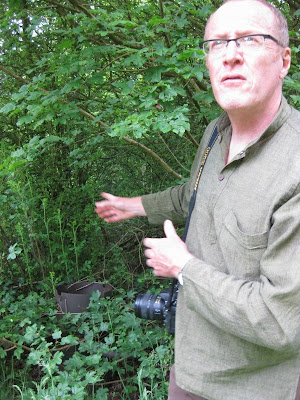 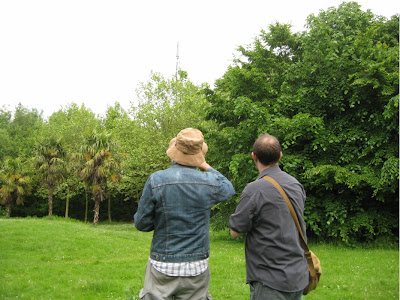 A small round hill with palm trees on top. 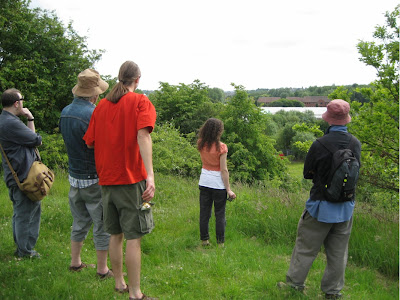 And a wonderful view of Greenhouse 2000, where the council still grows all of it's plants for the city. We laughed about the way in 1986 'Greenhouse 2000' would have sounded really futuristic and exciting. 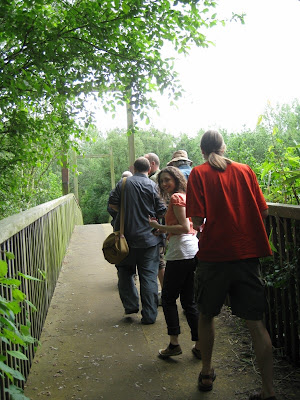 Then we crossed the bridge back to our picnic base.

The planting picnic was fantastic, and has made me determined to carry on with the project.

THANKS TO GLEN FOR THE PHOTOS ON THIS BLOG POST.
Posted by Anna Francis at 10:47 AM

I really enjoyed it, it's a magical place. And this morning, L. has asked me if we would go back there to look at the plants ... "Maybe one day when it's sunny ?"...

yes, definitely one day when it is sunny.

Wow, this looks great and VERY exciting to go in search of the remnants on the map! Wish I'd been there. Can't wait to see what happens next, what about a map on here so that more people could do a bit of guerrilla planting, before you know it the people of Stoke-on-Trent could create a whole 'alternative garden festival'!

that's a good idea Rachel - we are going to do more with the idea...so I will let you know.

Hey - I have recently become a Festival Park enthusiast too. I bought a DVD online and you can see some of it back in the day, plus all the original construction of the site. If you have any more projects like this I'd love to be involved. Personally I'd love to clean up the pebble mosaic pool at the back of the Moat House :)

Just nipped out and visited your tree by the way - still looking strong :) Glad nobody caught me wandering round the muddy woods in my officewear tho, ha ha!