Marina Abramovic presents at the Whitworth 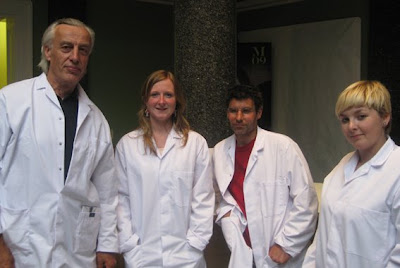 Last Thursday night some of the AirSpace team headed over to Manchester, as we had been lucky enough to secure tickets for Marina Abramovic Presents. I was particularly excited about this, having loved the performance artist's work since I was around 15 years old. In the car on the way over a discussion took place as to what we were all hoping to gain from the experience. I said that I felt somehow it would have such a big impact on me that it would change my approach to practice forever - this depth of anticipation may have surprised some in the group, whose ambitions were perhaps more realistic - for example one person said they hoped to have their ideas about performance art challenged (having not had much time for the genre previously.) It was good to open this discussion prior to the evening, in order to see what our knowledge and perhaps presumptions might be about the night.
On arrival at the Whitworth you are asked to switch off your mobile phone, take off your coat - swapping it for a lab coat which could be found on a school cloakroom style peg in the foyer. There was a small cup in the pocket of the lab coat, which you were advised not to throw away, as you would need it later. 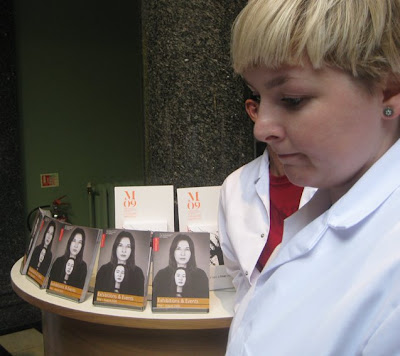 We were all suitably contemplative and expectant as we made our way through to a big hall that was already full of people. People were sitting on small chairs around the room, collected in groups, so we got ourselves a chair each and formed a little circle. Marine Abramovic made her way onto a stage where 4 other attendants were already standing. The first thing she did was to get the entire audience to form orderly lines throughout the hall. She welcomed everyone and gave a bit of a background into how she became an artist, and in particular a performance artist. I enjoyed what she had to say about the ability of performance artists to use anything around them as material for art works - including their own bodies. There followed an amazing session where Abramovic prepared the audience for the night ahead. The preparatory session was based on the fact that in our fast paced world people (and in particular art audiences) are not willing to give art long enough in order to fully read, digest and benefit from the art work. The programme we were about to view, put together by Abramovic, consisted of performance artist's works which all had a durational, time-based element to them. There was therefore need to slightly reprogramme us as an arts audience, encouraging us to become participants in an experiment, where we leave our coats and busyness at the door, and truly engage with these durational art works in the way that the artists involved intended them to be engaged in. The reprogramming consisted of a number of activities which required us to step outside our usual modes of behaviour, first of all a meditative activity (much like the sort of meditation we do in yoga classes) where we had to sit with a small glass of water for 10 minutes, thinking only about the water, exploring the water, and making it last for 10 minutes. I found this went quite quickly, and enjoyed it. Next we had to sit facing a stranger, and look into that stranger's eyes for 5 minutes. This was uncomfortable for me, and I did not enjoy it. This activity was repeated twice more with different strangers each time. I somehow ended up looking into the eyes of a woman each time, and I wasn't sure if I might have preferred to look into a man's eyes, just to see how that was. We did a few more activities of this kind involving screaming, and deliberate walking. The entire process created a strange feeling of contemplation in the audience. I was amazed by how readily people engaged with these requests, taking it very seriously. Some people in the eye contact activity found it impossible not to laugh, which I can understand - laughing is of course a natural reaction when uncomfortable. As we went into the building in order to view the artworks we were all very quiet, and somehow separate from each other - each person seemed on their own individual journey.
The artworks which we saw during the next 3 hours varied in approach - and I will not discuss them all here, just to say that Marina Abramovic had curated the experience for the viewer, and the emptied out Whitworth was the perfect venue for such an amazing and enlightening event. I felt as if I was in a strange nightclub, where around every corner something was going on - there was a naked woman falling endlessly in slow motion down a beautiful flight of stairs, a Raj transforming himself into a nineteenth century gentleman, dusty with the effort of smearing an entire room with charcoal while sipping Earl Grey tea. An Asian bride, newly arrived in the country dragging a sheet of heavy glass around a room like some living coffee table, all the time apologising with the words 'I Love You.' I don't know if my readings of the works were what the artists intended, but I really feel Abramovic's preparation helped me to access the performances; giving them the time they deserved. It was a night to remember, though not fully processed just yet.
Posted by Anna Francis at 5:33 PM

yes we did Celine - and I think it has finished now I'm afraid.
x