So last Saturday, 4th July we all headed over to Manchester's Chips Building to set up our AirSpace gazebo. We arrived around 11, and there were already a lot of people there with their stalls set up - I later discovered that some people had arrived as early as 8am to set up their stalls. 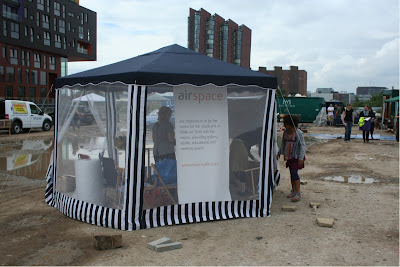 Our gazebo was the only octagonal one but it only took us about 15 minutes to put it up. We had to choose a spot in between a few puddles, as it had been raining quite a bit. Our pitch consisted of a number of tables, displaying each persons response to the Stoke-on-Trent boot fair. 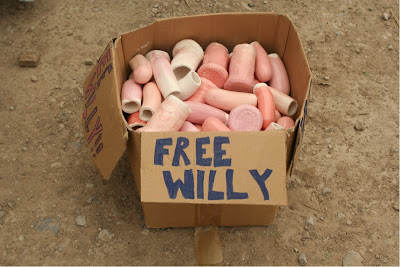 We brought along this box of Free Willies, which were left over from the AirTrade art auction in order to encourage people in to visit our stall. We had all approached the project in different ways, and the results were interestingly varied. 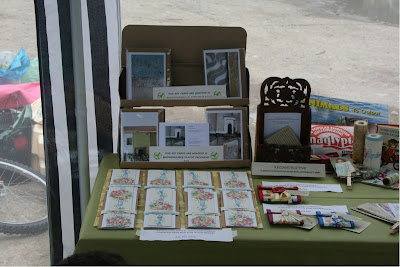 Kate Lynch had visited and collected paper based materials - and from these had made some limited edition cards and sketchbooks, as well as some beautiful wall hangings. 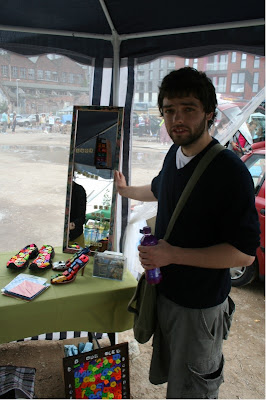 Brian Holdcroft had made some sculptural pieces which explored the idea of value - his base materials consisted of toy cars, mirrors and old shoes. Celine Siani Djiakoua carried out a photographic project, where she visited the fair with her camera, which she held in her hand and snapped images without looking through the viewfinder, as she went around the fair she purchased frames which would later be used to show the images gathered. The resulting images had strangely compelling compositions, considering the nature of their construction. Click here to go to Celine's blog and see documentation of the project. 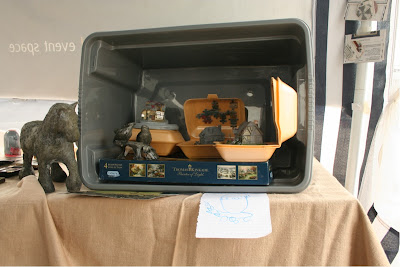 David Bethell had bought a series of very English objects and ornaments, and then used these as materials for his assemblages, turning the quaint English ornament into urban objets d'arts. Katie Shipley had purchased a book about quilting, and then created a quilted sculpture from its pages, as well as some stitched souvenirs. 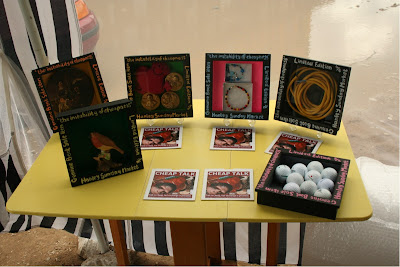 Bernard Charnley and I had created the 'Cheap Talk' cd described in the previous blogpost. Bernard separated the sound piece into tracks for each object bought, and then we made one cd per object to give away. Bernard used his objects to create 6 limited edition framed art works, he was interested in exploring the idea that a cheap items status may be elevated once the artists hand has got involved. I ended up with 14 items from the boot fair to work with. I decided to transcribe the conversations that occurred in order to buy the item, and then use the transcript within a certificate of authenticity. 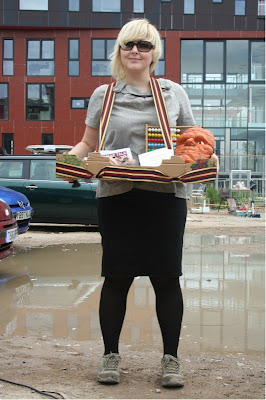 I had also acquired the fruit box and ribbons from the boot fair in order to create a sort of mobile boot fair stall (based on the old ice cream sellers trays from the cinema) this mobility allowed me to visit other stalls at ANTIFREEZE, and attempt to exchange my cheap items for works of art from other artist's groups. 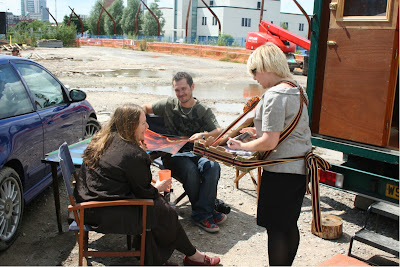 I was not too sure how well it would go down, but was determined to use my piece as a networking tool, and a way of making connections with other artists at the fair.
My first exchange was with Celine, which was cheating slightly since we already knew each other, but it was nice to exchange our responses anyway. Celine chose the hands and lizard item, and I selected one of her frames, a lovely little silver one, with a black and white image inside it. 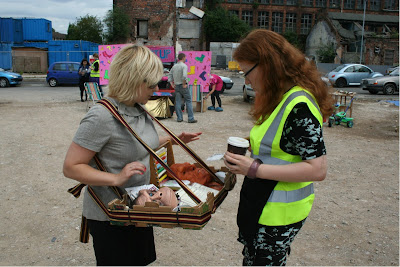 The first exchange I made outside of our pitch was with Alice Bradshaw, I explained my project, which was actually quite difficult, because my mobile boot fair had speakers attached to it, with the sound recording from Hanley Boot Fair - this added to the ambience of my mobile boot fair, but meant I had to speak quite loudly. Alice was interested in exchange,and asked an interesting question - which of your items are worth more than a fiver? I said well, they all are really, even though they were bought for pence, I have made them into a work of art by including the dialogue which took place to acquire the object, and you get the limited edition cd. Alice seemed quite happy with that and exchanged the abacus for a fiver. 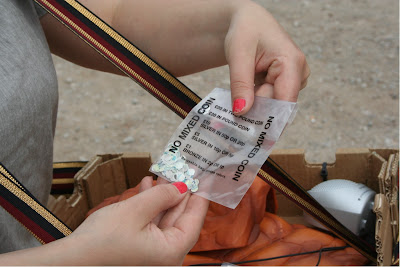 But being ANTIFREEZE it was no ordinary fiver - this fiver had been entirely holepunched, and came in tiny circles. 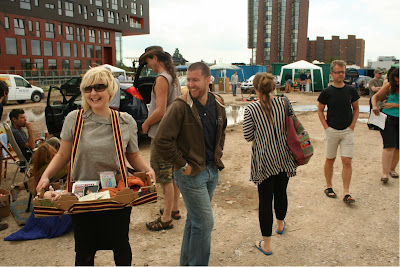 I managed to persuade the moody shop assistant on the Cargos stand to swap the expensive cat for an Alice in Wonderland book, I was really pleased with this swap because for one thing I have wanted the book for a while, but also I really shared the ethos of the Cargos idea. 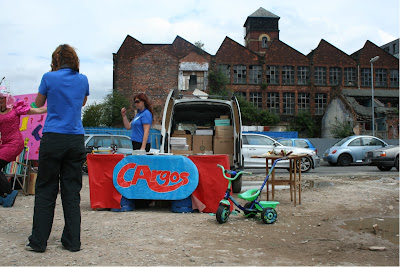 Cargos was a stall set up much like the high street catalogue shop we all know and loathe. You could browse through their crapalogue, and if there was an item that you were interested in you could have a look at it, and then perhaps purchase (or swap) for it. All of the items were boxed up in the boot of the car. 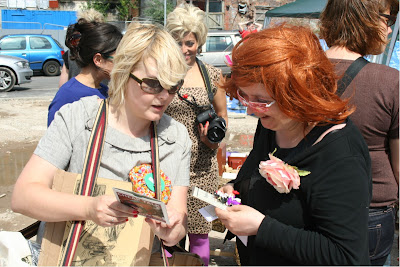 I swapped an animaniacs toy for a lock of Jane Austen's hair, from the Antiques stall, which was run by 3 beautiful antiques experts (one of which was actually Elena Cassidy-Smith - who was a selected artist in WLTM). Other swaps included the poncho for The New Curiosity Shop's WW2 Coconut Hero, the metal pipette for a 'Free to a Good Home' framed photo of a dog - 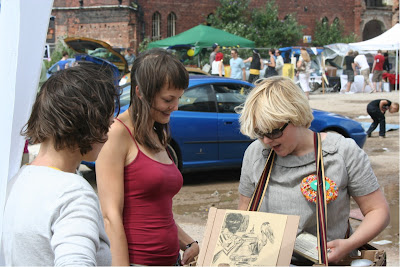 which was swapped under the proviso that I rehome the dog in my house, and send in a photo to the artist Bryony Moore, in order for her to document it on her blog. In the end I swapped all 14 of my items for works of art from other people's stalls, had a lot of fun meeting people and seeing what they were up to. I would like to do more work with the mobile tray - and am thinking of other ways to use it.
Posted by Anna Francis at 2:22 PM