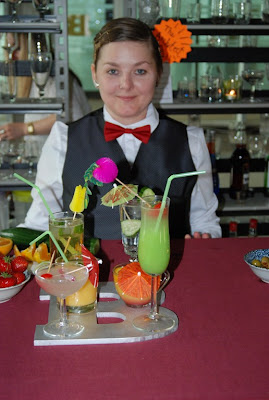 On Thursday, 14th July The Burlington Paper Cocktail Bar opened, from 6 til 10pm. Serving the 6 evaluative cocktails which had been developed through the week long residency. 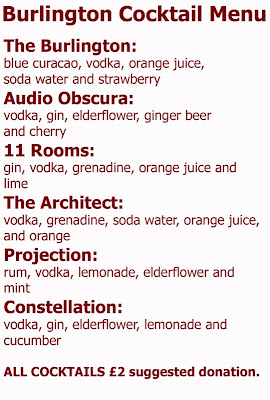 This saw me visiting Manchester International Festival events, armed with my 12 evaluation criteria which were developed from: MIF mission statement (4 criteria), Burlington Fine Arts Club ethos (4 criteria) and my own personal ideas of what makes a good art event (4 criteria) see this post for the criteria.
There was a lot to do to get the bar set up. 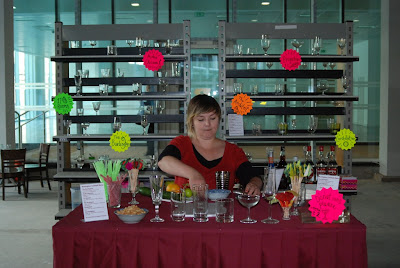 I decided to set up on the other side of the Reception table, as this would mean I was very close to the glasses shelf, and would be able to stick to Burlington methods of asking each member to choose their own glass. 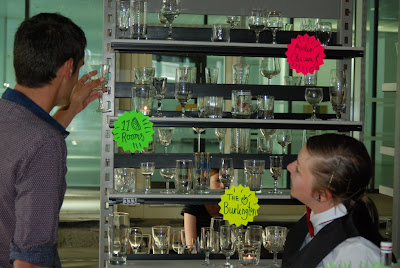 I displayed the names of the cocktails, and also the menu on the bar and got changed into my uniform. 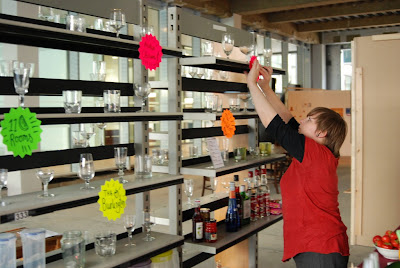 The cocktail sign looked fantastic and along with the luscious pleating, they really set the bar off, no one would guess it was two plinths and a drawing board! 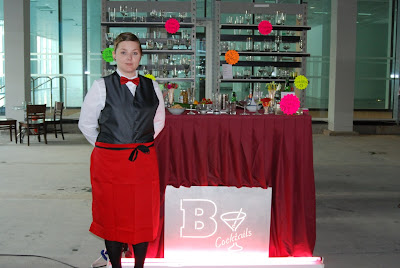 I had just enough time before opening to make one of each cocktail to have on display on the bar, so the members could see what they would be getting, and this also acted as a prompt for conversation. 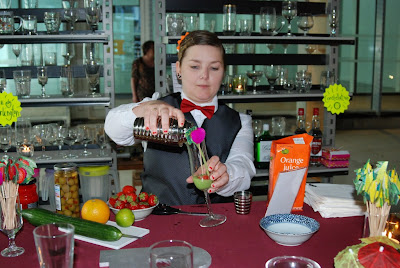 The cocktails were:
Number One: The Burlington, which ended up containing: blue curacao, vodka, Orange juice, soda water, a strawberry, and a fruit paper lantern. 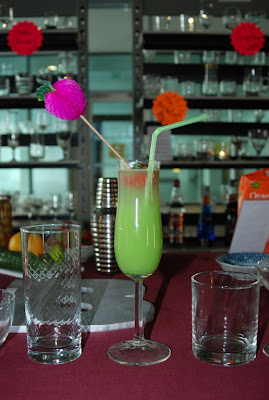 Next on the menu was Audio Obscura, which was very popular with the Burlington members, and sold out second after Projection. 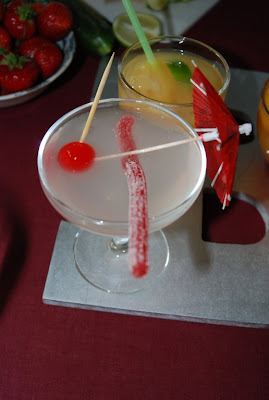 Audio Obscura contained: vodka, gin, elderflower, ginger beer, a maraschino cherry, a fizzy straw and a red paper umbrella.I was glad that this one was so popular and also that it included a few elements which bombarded the senses (even if here it was the tastebuds, rather than the earbuds.) Next was 11 rooms after the Live Art event at the Manchester City Art Gallery. 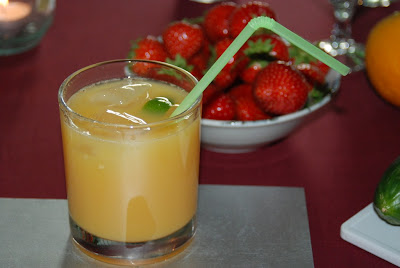 This one contained vodka, gin, orange juice, grenadine (mixed in) and a squeeze and slice of lime. This one was served with a straw - and was disappointing - which matched my feeling about the piece, (see previous post for reasons why.) Then there was The Architect, which refers to the MIF Architecture which I took. I actually really enjoyed this tour, and as tours feature quite prominently within my practice it was interesting to see how 'a professional' tour guide would approach it. 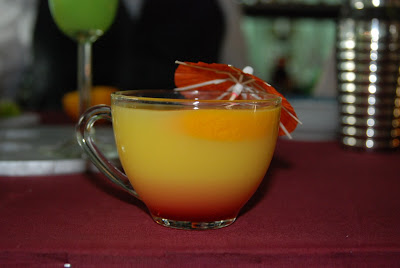 The Architect for me should be sophisticated, but simple - and so the choice of small European cup for display glass was important. The ingredients were: vodka, orange juice, soda water and a dash of grenadine, left to nestle at the bottom of the glass in the style of a tequila sunrise - classic!
Next up - the most popular cocktail of the evening - Projection - I am told that this one was 'really strong' but I know that it had the same amount of alcohol as the others. In fact the least popular was The Architect, which lots of people didn't want - because on the list there was only one alcoholic ingredient - however, I put in a double shot to make up for it! 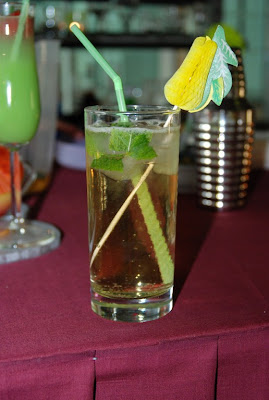 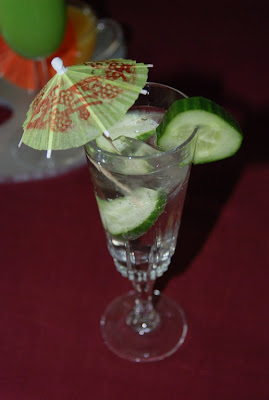 This one looked and tasted very fresh, containing vodka, gin, elderflower and cucumber. Constellations was not an official MIF show, but was an exhibition at the Cornerhouse curated by a Burlington member - Karen Gaskill. This was a wonderful show - in particular a piece by Katie Paterson called Earth-Moon-Earth, which saw Beethoven's Moonlight Sonata beamed onto the surface of the moon, the reflected notes were collected - but some were lost in the dark parts of the moon, and so didn't make it. The remaining notes are played by a self-playing grand piano, wonderful! 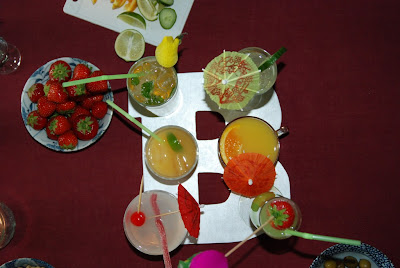 I enjoyed making the cocktails, and was amazed that some people didn't realise that I was not a real cocktail maker. One person, who I met earlier in the week, asked me - 'has the artist employed you to make these cocktails for her' so he didn't recognise me at first. I had to explain to a few people that this was not a real bar, but an artwork. And that they were drinking my art pieces. The idea here was for me to have a chance to talk to the Burlington members about their own ideas, thoughts and experiences of the MIF, but at times I was so busy (at one point a queue for cocktails went right down the middle of the large Burlington Club Floor) and at these moments I think I really became a Cocktail Maker, rather than an artist. At other points it worked very well and I was able to discuss my experiences, and test the feelings of the members.
It showed that many Manchester based artists and members of The Burlington had not been to any MIF events, despite there being quite a few that are free. Reasons given were, too busy, not relevant, not interested, too expensive, intending to go later on...
Also it seemed to be a recurring feeling that MIF is not for Manchester based artists - and is more about bringing people in - some said they felt that the MIF does not represent Manchester based artists, but that it is not a bad thing for the city.
If I were to do something about this again I think I would be more relaxed about it. I did try to take my time in making the cocktails in order to talk to people properly, but this is something I could have taken further. Perhaps if I had had a booth, which people could come into one by one - which would isolate me and them, and give me a chance to talk to them properly, that would have been better? Although this would have taken away from the 'atmospheric bar' feeling. There were times during the evening when people hung out at the bar chatting to me while I made cocktails for others - they would watch and comment on the ingredients and the shows that the cocktails referred to, and in this way it worked very well. 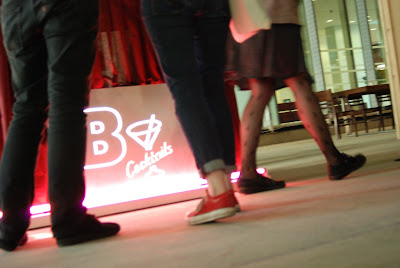 The other idea may have been to employ a barman to make the cocktails and provide table service. This would have been a good idea for the Burlington, as the idea is for groups to sit at tables and chat - as the Burlington Cocktail Bar became the focus these groups were somewhat broken up - as people queued for cocktails. If I had waited on the tables this would not have happened, and I could have joined the tables and instigated conversation around the MIF around the room. 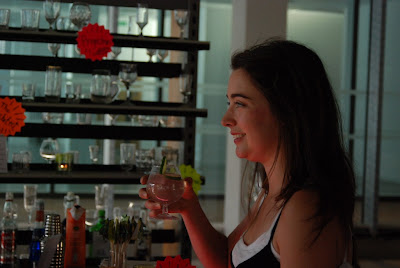 My Collaborator at the Burlington Tracey Eastham had shown her collages on the posts and window of the Burlington. Unfortunately I did not get a chance to find out how Tracey had found the opening, as it was so busy, but I will definitely be back to see Tracey again and ask her how the residency was for her. I know that she did enjoy a few of the cocktails - and smapled the one that we had created together at the Cornerhouse.
The Burlington will close this coming Saturday (I can't believe it has been a month already) and myself and Glen Stoker will be back in Manchester for the closing event with this months 'There is Beauty in the City' outing. We hope to talk to the members of The Burlington about which bits of Manchester they find the most beautiful, we will be creating a map of Beauty. Looking forward to celebrating the successes of the Burlington then.
Posted by Anna Francis at 1:22 PM