Platform P at the Duke 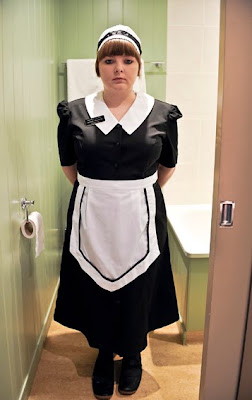 Last weekend I was in Plymouth as I had been invited by curators Edith Doove and Ray White (of Platform P) to take part in their event at the Duke of Cornwall Hotel as The Chambermaid. The Duke is an important historic building, built in 1863, as the Hotel manager told us - to cater for the Railway Station which used to be just outside, bringing people to and from the harbour boats. This explains some of the buildings fantastic original steel work features, which have much in common with Victorian train station design. 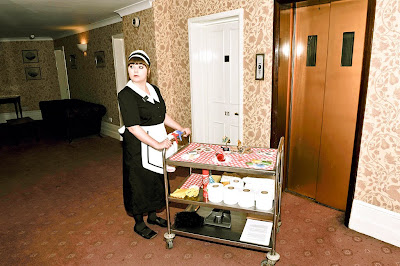 I met Edith at the Trajector art fair in Brussels earlier in the year. This was really interesting, as the two experiences could not be more different. Hotel Bloom Brussels describes itself as a modern design hotel, and is a sort if swanky 'art' hotel. I wrote up my experience of that event here. But my experience was that the hotels were quite reserved in their approach to art happening in their hotel; whereas the Duke seem to have been willing to really push the boundaries - which is admirable, considering this is a working hotel. The staff at the hotel were really accommodating, lending me a chamber maid trolley for my performance and also cleaning equipment, they were also really friendly, and seemed quite interested and bemused during my performance, even offering me a job. 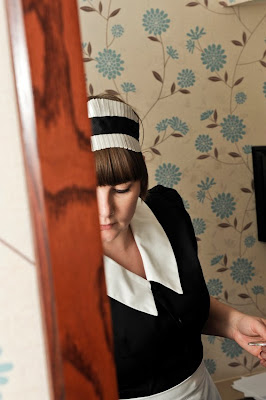 I decided to build on the unexpected experience in Belgium, where I was almost invisible. This interested me. I quite like the idea that my presence in the hotel during the event might blend in - where guests and visitors might be unsure whether I am 'real' or not. In fact, this time quite a few people did not notice that I was doing a performance, obviously seeing me as part of the hotel - asking me for directions to the toilets, or simply ignoring me. I decided this time, instead of delivering room service, which was not allowed last time, or standing silently as I ended up doing, I would make myself useful by cleaning the public areas of the hotel. 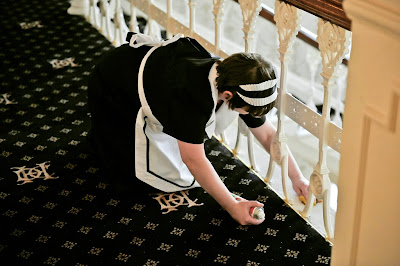 I was interested in exploring the value that is placed on art, artists and cultural activity. In particular the way that artists are rarely paid properly for their time and work. I was interested in questioning the perceived usefulness of an artist's activity - giving myself the task of doing two jobs at once for this performance - representing a group of artists as curator, while taking up the role of Chambermaid at the Duke - cleaning the hotel at the same time. 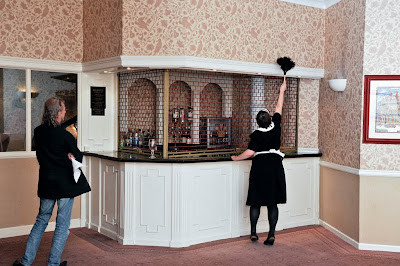 Most artists hold down a number of multiple jobs in order to pay the rent, while attempting to maintain an active and critical arts practice at the same time, especially in the early years of an arts career, but sometimes throughout. 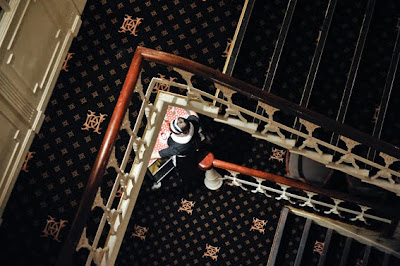 In recent projects I have noticed a particular stance from some members of the public in relation to the funding of the arts - during the recession. Questions of value and worth have arisen - and I have heard, more than once, opinions ranging from - this is a waste of money, to - the money for this project could have been spent on a hospital. 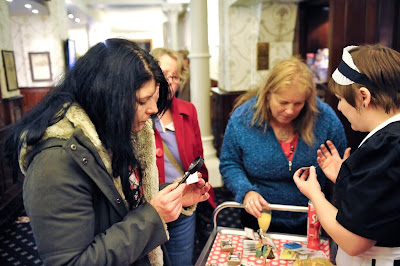 I hoped that through this performance I could begin a conversation about the value of my activity as an artist - and find out if my activity would be more acceptable if teamed with something which looks demonstrably like labour.
My question then: 'Is my work worth more if it includes some form of manual labour or industry, or is my arts practice enough?'
Platform P managed to secure funding for the event at the last minute - so the artists and performers did receive a fee, which was fantastic, but makes the question even more pertinent.
Before the event I put out a call for artists to make small multiple artworks in response to the theme of Hotels. I was really pleased with the response, and selected 7 artists works to display on my trolley. 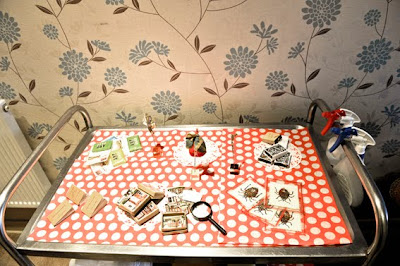 The lower shelves of the trolley had cleaning equipment, and one member of the public said 'That trolley was set up by someone with OCD' which I liked. 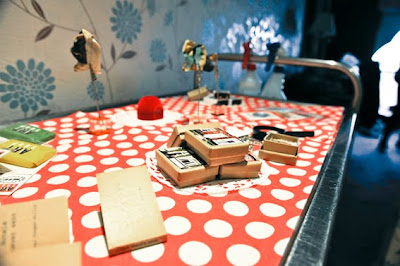 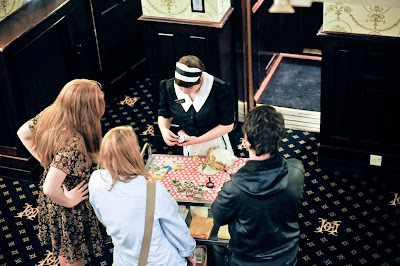 On the day of the performance I was feeling unwell - having a bad cold. I decided therefore to ease into the Chambermaid performance, by starting on the third floor. This would give me a chance to get into the rhythm of cleaning before talking to the public. I cleaned the book shelves, the skirting boards, the windows, the door handles, the light fittings, the staircase and banisters, the mirrors, the pictures. 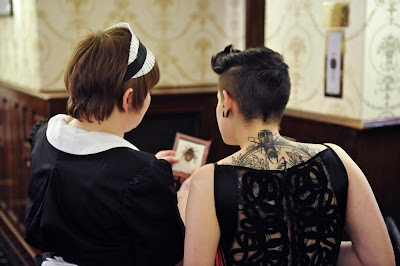 There were some open rooms on the 2nd and 3rd floor, so every now and again a member of the public would wander along the corridor and encounter me.
Some just stood and watched me cleaning, as if it was a fascinating thing, while others would speak to me, and I would have a chance to tell them about the artists and their works.
As I got closer to the ground floor it got busier. 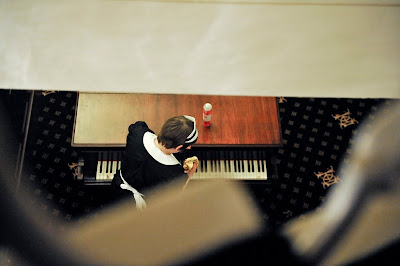 And then came my favourite part of the performance. I noticed that the piano was very dirty, in particular - the keys were filthy.
I decided to give them a good clean. One by one I cleaned each key, which would create a plink plink sound which echoed around the reception area. This brought the attention of the public, one man even came across to ask if we could do a duet, so while I plinked away at the key - he played the other end of the piano. He told me that earlier in the day he had had a go on the piano, which I had heard, he was very good. He said that as he was playing he had thought to himself how much nicer it would be to play the piano if it was cleaned - so he was very pleased about my work. 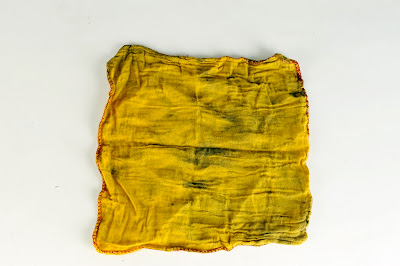 This was the cloth which I used to clean the piano.
I spent the last couple of hours of my 4 hour performance in the foyer area of the hotel. Cleaning and speaking to the public. I became not only curator of the 7 hotel related multiples, and chambermaid but also information sign poster. Members of the public coming in for the Platform P event began asking me when performances were starting, which rooms the works were in, how to get to the ballroom, and what was that piece of work about (amongst other questions.)
Overall, and once rested, I felt very pleased with the performance and its reception by the public. My favourite comment was 'It's really great having you here to tell me about the art works - some of the other stuff was hard to understand, but this is great because you have explained it.'
I am interested in revisiting ideas around the usefulness of artists' activity. I would like to try out other performances where a variety of roles are being performed at once, and where notions of industriousness are explored. The Platform P event was fantastic, and was something I was really pleased to be involved in. I met some fantastic artists, some of whom I hope to collaborate with in the future. I hope that Platform P does another event in the future. Perhaps I will get a promotion next time, and get to work behind the reception desk?
THE ARTWORKS: 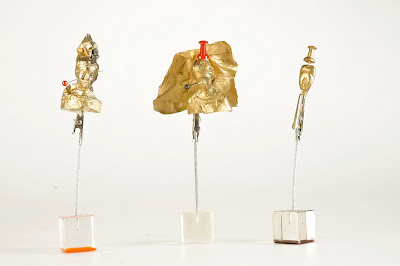 Casts - Behjat Omer Abdulla has been working with the notion of identity for many years since he first found himself in a state of exile trying to gain recognition by the Immigration system in the UK. It has been over thirteen years since he left his native land, Kurdistan-Iraq. As a mixed media artist working mainly with drawing, photography, and video installation, he uses his practice to listen to peoples’ stories and try to create a platform for debate around the issues raised. For Behjat, art questions who we are and how we place ourselves in the world. It is a way to be in touch with our responses to life and a way of speaking that allows viewers to translate, decode and change it to their own languages. Here the Chambermaid is showing small sculptural works which capture the imprints of identity, casts in gold taken from porcelain goods which reference the Duke’s luxurious past.
behjaturl.tumblr.com 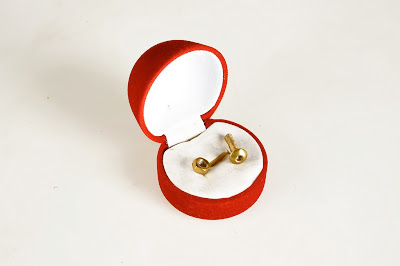 Divorce - David Bethell is a UK artist based in Leek, in the Staffordshire Moorlands.
Bethell's work is inspired by landscape and the natural environment, often looking at the contrasts and conflicts of human influences on landscape. His work also looks into our aspirations, desires, and our failure to achieve these unattainable dreams. He uses a range of media from performance, installation, object and animation.
Here his piece Divorce takes as inspiration the hotel as a site for romantic tryst. The promise of a perfect fit between nut and bolt is frustrated through the gold plating process. Raising the value of the objects has rendered them incompatible.
davidbethell.com 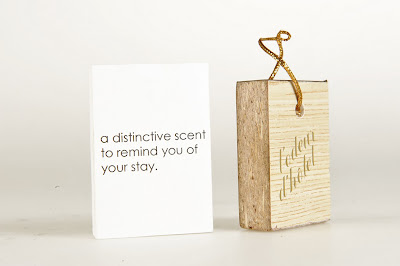 l'odeur d'hôtel - Andrew Branscombe’s piece responds to the prevalence of Formica as a construction material for furniture in the majority of reasonably priced Hotel and Motel rooms. The work consists of a small piece of wood effect Formica, rectangle, shaped and sized to fit inside a matchbox. The object is promoted on the outside as a car air-freshener to be hung from the rear view mirror. There is however no particular scent other than that of the material itself, which is bland, and manmade. The piece is examining the blank mundane and sterile environment that a mass-market hotel produces, contained within an outwardly exciting package. The piece aims to celebrate the distinctive nature of the Duke.
andrewbranscombe.blogspot.com 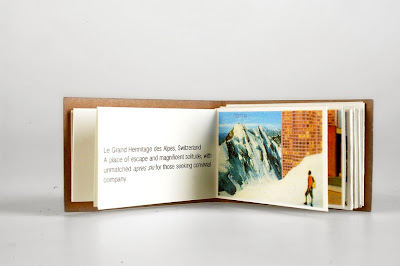 Postcard Books – A vital core running through Anwyl Cooper-Willis’s work is a sense of the ridiculous. Exploring how humans jostle and politic, making a way for ourselves in society. The posturing and pomposity, the hubris, the hypocrisy; an image of the absurd.
Here, offers of communication seem to be being made but remain somehow unfulfilled. The messages in Postcards from the Past – on having been Sixteen in their terseness decline to give anything away, and in 23 Postcards of Hotels: 22 Never Sent, the un-sent card itself is a failed communication; the reader must make their own guess as to the circumstances of the non-sending. The postcard, a stereotype of trite communication, is used to confound that stereotype.
acooperwillis.wordpress.com 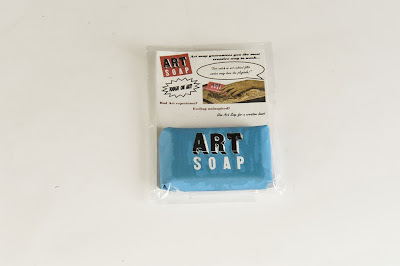 Art Soap - Kate Lynch’s artwork deals with issues of sustainability and environmental concerns through the use of recycled, salvaged and natural materials. The Artist explores processes of deconstruction, reconstruction and conservation; highlighting historical features and visual histories revealed within the architecture of buildings.
The piece here reflects Lynch’s interests in replicating and appropriating packaging. Art soap is hand made using rosemary, bergamot and orange essential oils which aid creativity by promoting focus and clarity. 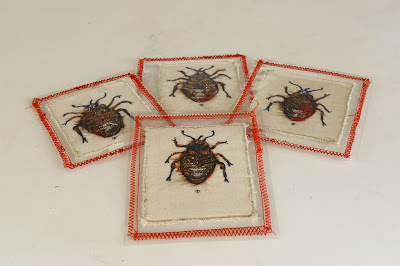 Bed Bug – Kim Matias is an artist and photographer based in Bristol, UK. Her embroideries often pick up on the downtrodden, forgotten or grotesque. Celebrating that which is usually overlooked, and finding beauty in the most unexpected of places.
Kim often uses human hair and other collected fragments within her embroideries. 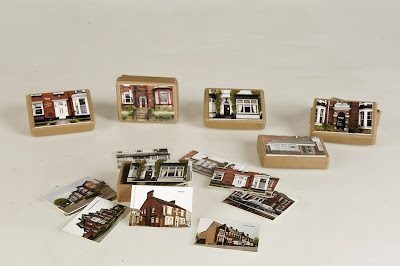 Stay - Glen Stoker uses photography and film to explore the human condition and its relationships with the surrounding world. With a particular interest in the hinterland, both physical and metaphysical, the work often includes notions of journey, walks and mapping.
Stay is a text and photographic study of ten Stoke-on-Trent City Centre guest houses, forming part of a larger body of work investigating the idea that place = space + memories
www.glenstoker.com 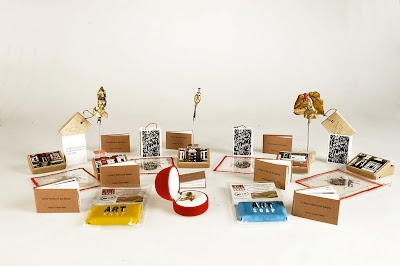 Thanks to the 7 artists who made works for my trolley gallery - and thanks to Glen Stoker for the photographs.