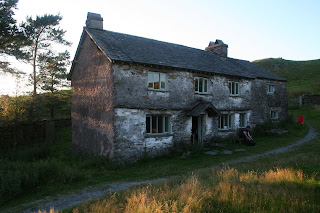 This summer 6 of the AirSpace studio residents went off to Low Parkamoor: a cottage in the hills above Lake Coniston, managed by Grizedale Arts.
The cottage has no electricity and a well for water, as well as a composting toilet and some of the rooms have been designed by artists. All water heating and cooking has to be done on an ancient range. It is off-grid living. 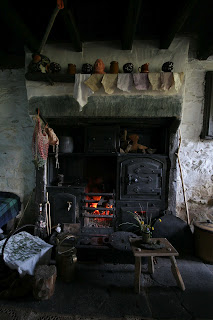 I decided that while there I would practise the art of Japanese flower arranging - an interest that I picked up during my residency in Japan. It is something that I have always had an interest in from afar, but never had the time to properly consider. It was only seeing a demonstration while in Osaka, that got me thinking about the idea of 'site-specific' flower arranging.
I decided that each day I would do an arrangement, and aim to create one for each room. One of the things I like about Ikebana is that it is important to select the site for the arrangement before selecting the vessel or the flowers. 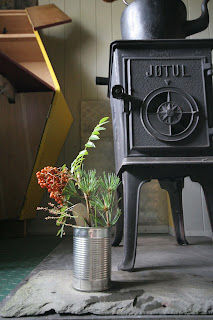 The first one I made was for the work room. I selected the rowan berries to compliment the yellow of the cupboard, and used a can that was leftover from lunch. I also chose to put the rowan with some Scots pine, as they were growing next to each other, and I have noticed that selecting plants which grow together seems to work well. 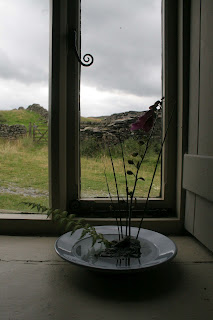 The next day I decided to do an omission variation. I was focusing on what is known as Keishin Ikebana - which has 3 main lines Shin the biggest, representing heaven, soe, which is 75% the length of Shin and represents man, and hikae, which is 50% of shin and represents earth. In the omission variation Soe is left out, and is therefore a display of modesty. I used a shallow bowl, and hid the kenzan (spikey thing which makes the flowers and plant stems stand up) using pieces of slate. 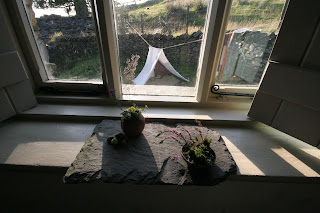 Next I created this one, which used some wooden ornaments from the house, and this one is a split variation, where there are two vases - with a pool of thought space in the middle. 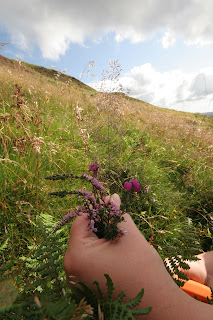 I made the split one for the window sill overlooking where Kate Lynch was building a den outside - an escape space for quiet time. 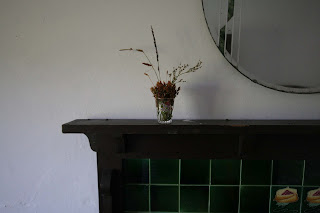 I went on to make one for each of the bedrooms, this one called 'The Kill' was made to go with the tiles in the middle room. 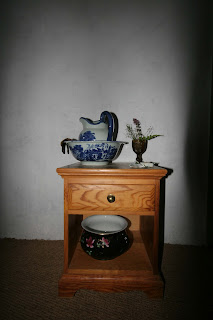 One for the end room, where I matched up the colours of the chamber pot to the flowers selected, and one for the room I was staying in. 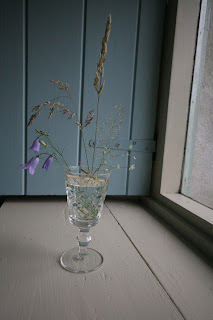 The room  I was in had delicate blue shutters, but the main thing I was responding to was the view of the fir tree moving against the sky, which I could see from the bed in the mornings. 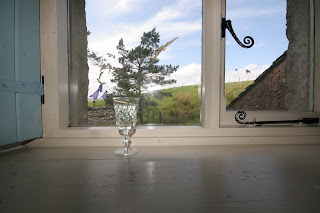 The feeling of lightness, and movement was what I was trying to pin down, and also - from the window I could see harebells blowing in the grass.
One of the days it poured with rain, which made it quite difficult to collect flowers, but I rushed out during a break in the rain to collect some rowan and fir cones, and decided to create a mobile ikebana. Ikebana is all about balance, and this one was even more challenging. The last one was made for the kitchen. 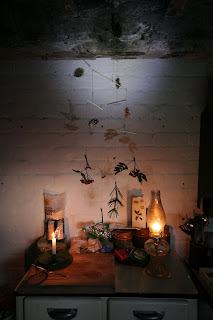