My practice has for some time involved flowers, plants, and green spaces, in relation to regeneration and the built environment. I was really interested then, when I first heard that our city, Stoke-on-Trent, was entering a show garden for the Chelsea Flower Show.
For years now, the only news making the headlines across the UK about Stoke is usually bad - factory closures, being voted the worst place to live, and other negative stories. This only proves to become a self-fulfilling prophesy, as people get the impression that this is not a good place to be, and don't visit or move here. What a positive change then, for the city to have something to celebrate, and to get some good press!
The Stoke-on-Trent transformation garden, seems to me to have picked up cleverly on this theme, presenting a city in metamorphosis.
The design itself celebrates the rich pottery heritage, but looks to the future, including elements of cutting edge design, high quality engineering, and forward thinking green specifications. 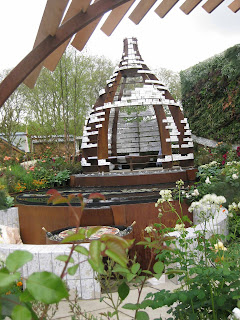 I have never been to the Chelsea Flower Show, and so this year seemed the year to go, but I had not bought tickets, and by the time I looked into it, they were sold out! So I was amazed when I received an email from the Council's 'Our City' magazine, letting me know that a competition to win tickets that I had entered had come through! I had my ticket. 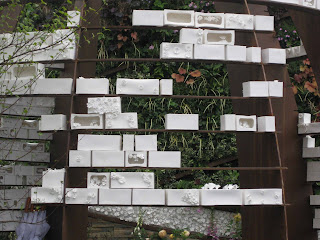 One of the main features of the garden was a steel bottle oven. I have to admit that usually, when it comes to the ubiquitous bottle oven shape being used (as it frequently is in the city, for public art works and other representations of Stoke) I am usually not a fan - but in this case, it seemed to make sense, to let people outside the city see this architectural feature. What I love about this design, is the bone china bricks, created within the British Ceramic Biennial's studio in the old Spode Factory - which I saw being made on a recent visit. These are truly beautiful objects, and each one unique. 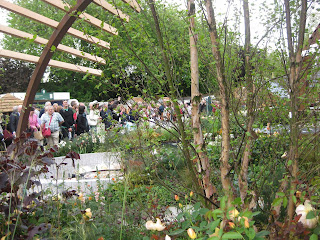 What a shame that the public viewing the garden would not get to see the exquisite detail - as unfortunately, despite how it looks on the television, you can't enter the gardens, but instead observe them from the path nearby. 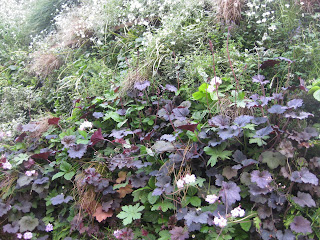 The growing wall was beautiful, and is something I would like to experiment with one day. 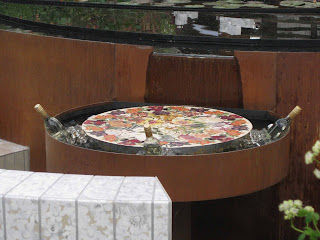 I was not able to get a close look at the one-off Moorcroft table, but it looked great, and even surface pattern students from Staffordshire University had contributed to the project, with their cushions, what a fantastic opportunity! 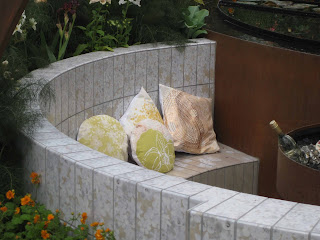 Well done to all involved in the fantastic project, it was truly a city partnership, letting the country know a little about the good things that are going on in Stoke-on-Trent.
Posted by Anna Francis at 6:25 PM