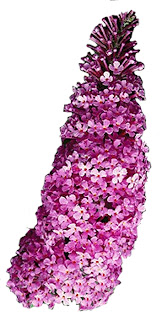 This Spring/Summer I have developed a new series of works which celebrate the Buddleia Plant. My interest in Brownfield sites across the city continues, and one of the most prevalent plants, almost always present on these sites is the Buddleia.
Buddleia is able to grow from the most unlikely of patches - even managing to grow out of tiny cracks in buildings, finding the smallest patches of viable fertile soil, and creating something beautiful and impressive. I realised on a site visit to Paper Gallery, that there seems to be a correlation between Buddleia and artistic activity. Artists too can flourish and create something from nothing, in the most unlikely of places: also, I think that the types of spaces which we find ourselves operating in (the overlooked, the not yet noticed, the difficult) are just such places that Buddleia also inhabits.
So, the buddliea plant has come to represent for me a way to flag artistic activity, and begin conversations about how artists are operating.
The buddleia has had 3 outings so far this year: The first was part of the Park Traces project that I am working on this year: to document Hanley Park in Stoke-on-Trent, a beautiful Victorian Park, that is in desperate need of renovation. The Park is the subject of a Heritage Lottery Funding Bid, and therefore it is really important to document the park as it is today, in order to see the differences in the future, if the bid is successful. In May, I lead a group of 9 art students, plus two other artists, Bethan Lloyd Worthington and Phil Rawle, in a week long project, looking at the park, and developing site-responsive artworks, which were used as starting points for conversation with the public. Details about Park Traces can be found on the project blog.
My project for Park Traces centred around the amenities for Park visitors. One of the issues, flagged by Park Users, is the lack of adequate toilet and other facilities within the park. The toilets are often closed, and when open, are usually less than inviting. The Ladies toilet sign seems to point to the once well cared for amenities within the park, and I decided to focus on The Ladies Toilets. 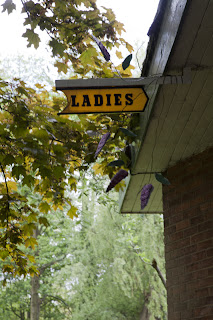 The buddleia was exhibited outside the ladies, on the sign, which we spruced up, by giving it a clean and a quick lick of paint. I assembled a good set of cleaning products and utensils, and made my way through the park to the toilets, first thing on Saturday Morning, before our projects were due for display. The buddliea is made from 3d photographic decoupage (photo on card), wire and floristry tape. 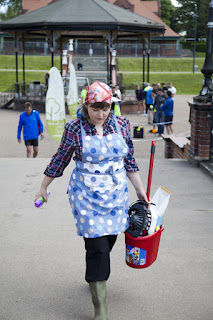 I cleaned off toilet tissue splatters from the walls, cleaned the toilets, and the floor and the sinks. 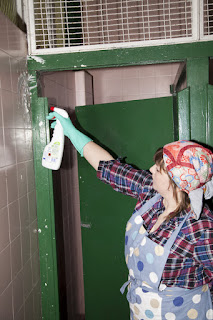 And provided hand soap, toiletries and flowers, to make the space more inviting. Bleaching, scrubbing, and mopping certainly improved the smell in the toilet, which had been quite bad, but was soon much improved. 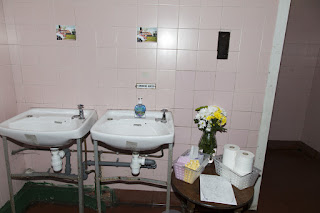 Maps were also installed, so that the public could identify that this was one of the works of art in the trail, and throughout the day the toilets were used by lots of surprised, but delighted Ladies. One lady said it was wonderful to be able to help her grandchildren wash their hands, as she couldn't remember there ever being soap in the toilets before.
If only we had had longer, we could have made some more permanent repairs to the toilets, and a lick of paint would have been good too. It took about an hour to clean the toilet, but once done, it would be quicker if it were due to happen on a daily basis. Lets hope the HLF project flags the need for better amenities for park users.
The next buddleia outing was as part of the Paper Perform Exhibition at Paper Gallery, Mirabel Street, Manchester. Paper Gallery seemed to explode onto the art scene last summer. I followed with interest their trajectory, while on my residency in the mountains of Japan. From afar it seemed that this tiny gallery was making a BIG impact. Successes at the Manchester Contemporary art fair, and lots of coverage certainly seemed to catch people's attention. I thought it sounded a fantastic idea to have a gallery dedicated to works on, with and about Paper, so I was delighted to be invited to take part in their 7th exhibition: Perform.
You can read about my site visit to develop ideas here. 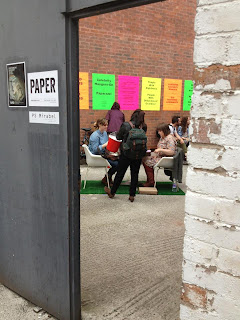 In the end it was the Paper Decoupage Buddleia which was developed, and for the exhibition I had a table set up, with two chairs, and the idea that the viewers to the show would be invited to sit with me, and make the buddleia and have a conversation about the impact that Paper had had or is having on the area, and on the people that visit it. 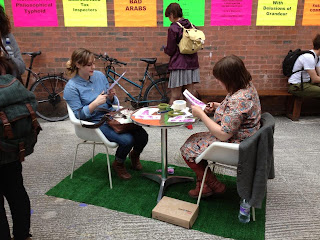 Conversations that were had centred around the specific location, and the impact that Paper was having on the Mirabel Street area, whether or not Paper had made this area better known, and one conversation about the fact that Mirabel Studios had been in the location for longer than Paper, but that before Paper, no one knew where it was. 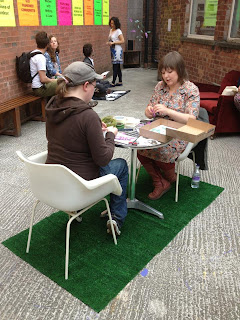 During the Private View we managed to make an entire Buddleia plant, but of course the plant is secondary to the conversations. The Buddleia here is flagging the good work that paper is doing, and talks about the way that artists locate viable, cheap spaces to work, and through their activity, the locations become better known, and better occupied. 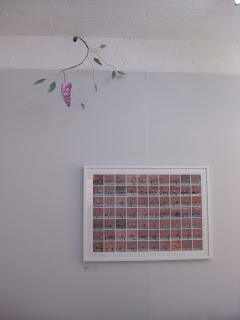 My buddleia were installed in locations inside and outside of the Paper Gallery, and remained for the 6 weeks of the show. 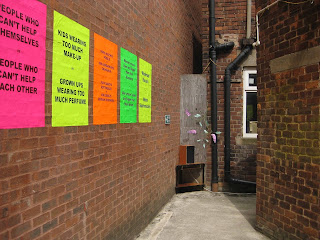 Many thanks to Nicola Smith for the opportunity to be involved in this wonderful exhibition. Details of artworks and artists here.
The final Buddleia work, was installed in Lichfield Cathedral, as part of the Lichfield Festival, which ran from 4th - 14th July. AirSpace Studio Artists Yearly exhibition would this year take place in the Cathedral.
The time frame was quite short, but we are all quite experienced now in forming site responses, and so everyone rose to the challenge of such a wonderful space quickly.
I was intrigued by the Erasmus Darwin House and Herb Garden, which is situated opposite the Cathedral. Erasmus Darwin was Charles Darwin's Grandfather and a good friend of Wedgwood. I was fascinated to learn about his Commonplace Book, a sort of miscellaneous journal containing information and details about his scientific discoveries and research, and his interests in the herbal properties of plants. Probably because we (at the Gallery) have been developing the Yarden, I was fascinated to see what a really long standing and established walled growing space might be like. Darwin, a polymath, is also famous for writing a 12 part poem called 'The Loves of the Plants, and so my piece for the exhibition was to develop a 12 part poem, which explored the seasons, using the art of Floriography, to connect plants found in the Herb Garden, with the seasons and their proposed meanings and uses. 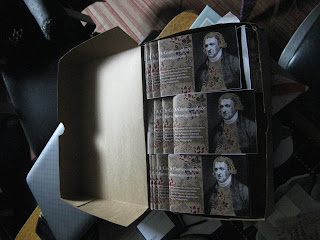 The poem comes in a booklet with collages, and is also a proposition for a one year investigation, looking at the Herb Garden, and the works within the Commonplace Book. 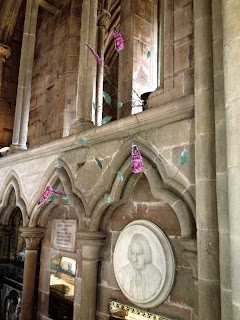 The booklet (limited edition of 100) was available from inside the Erasmus Darwin House during the exhibition, and also from beside the Erasmus Darwin Plaque inside the Cathedral, where my buddleia was installed. It is yet to be arranged whether the year long investigation will happen or not, but I hope it does.
The buddleia has been an enjoyable series to work on, and I am sure will be something I return to.
Posted by Anna Francis at 11:31 AM