A Walk with Monique

Alongside many solitary walks, or walks as starting points for exploring new sites, there have been a few remote walks over the past couple of years, with other artists: there was a walk with Emily Speed in February 2012 (read about it here) - I was walking at the Stoke-on-Trent Garden Festival site, and Emily was walking at the Liverpool Garden Festival Site, and while we walked we wrote to each other, then there was a walk with Bethan Lloyd Worthington, (read about it here) during my residency in Harlech in May 2012.
This Summer I saw a call from artist Monique Besten, who would be spending 40 days walking from her house in Amsterdam to Nomadic Village 2013 in the South of France. (Monique's project is documented each day via a blog, which I am enjoying following.) Monique was looking for people to walk with on each of the days, and they could be physically walking with her, or remotely walking.
I thought the idea was great, and wanted very much to walk a day with Monique (at least in thought) so got in touch to secure a day. I met Monique at the end of last summer, at the Sideways Festival of Art and Walking in Zutendaal. (read about it here). Monique was one of the librarians from the Walking Library, and at some point we made a connection through my absent mindedly leaving my purse in the library: Monique was able to identify me by a library card she found inside, and the purse was returned before I even knew it was gone.
So on Saturday 17th August, I set out on a journey, and so did Monique. Coincidentally, we both photographed our feet, wherever we were standing on the journey: they are at the top of this post.

My instruction to Monique.

I will leave my house early on Saturday, 17th August, to take the train. I will journey West towards the sea, and I will not stop until I get there.
At 1pm, I will stand at the shoreline, and look out to sea .
I will spend some time thinking of you on your journey, and thinking about the day you are having. 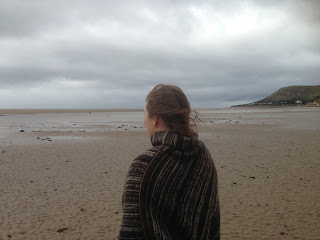 Monique's Journey: Day 3: Walking with Anna Francis
I woke up too late. 7.30. I had planned to work out my route, write my stories, think about today but I had just slept. I thought about Christian Bobin's words in The very lowly, his book about Francis of Assisi, I didn't remember the exact words but they said something like "all good things start with sleep". Maybe I had done well. At least I had slept well. And it wasn't too late for breakfast. A good walking day starts with a serious breakfast.
The breakfast was in the main building. High ceilings. Old wooden furniture. Flowers. Piles of fresh fruit. Yoghurt. Cheese. Eggs. Cappucino. Views of green meadows with birds and donkeys. But no internet connection. I felt stupid. Cursed myself for not having tried harder to get some work done yesterday evening. Because today I had an important task and I wasn't prepared. I had no idea where to go to, what to do. Today I was taking over the duty of a soon-to-be mother to think about her child. A serious duty.
On the other hand, what did it matter where I went? I had maps in my Ipad, a gps, everything I needed on my back and it was the season of abundance, free food available at every hour of the day, fruit, edible weeds, things for sale for little money on small tables outside peoples' houses.
I enjoyed the breakfast, looked at the donkeys, thought of another walk where there had been a donkey present, a long walk through Belgium where I had met Anna. Anna who will be a mother soon. Anna who will go to see the sea today. We will meet at one. She will look at the sea. I don't know where I will be but I will be thinking of her and the little one.
I left, I walked, I used my tiny Ipad to navigate. I realised I had been so eager to have things planned well for the serious duty of today but that it was so much better just to see how things work out and let life lead the way. I bought some plums "from the neighbour's garden", thought about the little one, about how strange it was for me, not wanting to have kids, to have the responsibility of thinking about this tiny creature and wondering what her/his life was going to be like. I thought about Anna and then it struck me that I'm walking with two Anna's these 40 days. Today with Anna, the mother-to-be, a mother who asked me to think about her child for a day and in September with Anna, the mother of a man who asked me to walk in memory of his dead mother, a son asking me to take over the duty of thinking about his mother for a day. Life and death in a name. In any name actually.
I had started the day by embroidering Anna's name in my coat. Yesterday in Utrecht I had bought some blue thread at a thriftshop, I thought I could use it for today, for Anna. I came across the same colour of blue in a piece of ceramic along the road and I took it. I found a sad pigeon, dead, lying in the grass loooking as if it was asleep, its body covered with big dewdrops glittering in the sun, one wing stretched out. I walked and walked. And wondered where I would be at 13.00. I had set my alarm, I tried to be timeless.
I was just crossing the border of the former Roman Empire when my alarm sounded. History and the present merged. I thought about Anna and her little one. The one that will be. The future. And while doing that I was looked at by hundreds of eyes. All along the road big old birch trees, tree eyes, I've always been intrigued by these trees, their whiteness, soft skin, their eyes. And recently I had discovered how usefull the bark is when you want to lit a fire. Anna at the seaside, me inbetween trees, thinking of each other. Both thinking of the same child. 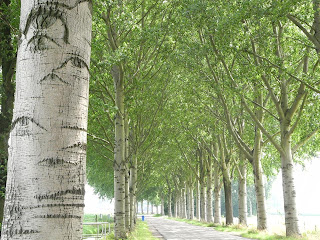 I took a photo of the trees, there was something blue in the far distance. I walked on. I passed the blue trash container. I passed the town of Werkhoven, I crossed a river, I made my way along another river, took a small ferryboat and reached a campside. I thought about the child, looked at the field packed with caravans, the fancy boats and decided to walk on, to look for a quiet spot somewhere, to camp in the wild, although in Holland this doesn't really mean what it sounds like. I walked through Beusichem, had my diner in a cafe, walked on and saw clouds in amazing shapes, saw the sky in a shade of blue my camera couldn't capture. I thought about how present the blue had been today and just as I thought it was a good thing I didn't believe in these coincidences saying something about the future, the sky turned from blue into a glorious pink. Blue, pink, an unborn child. The sky turned dark, the colours left and I walked throught the night, looking for a green spot to dream of a colourful life for a new human being and I smiled. It was still warm, some young cows followed me, I took a left turn and found a small path inbetween some fields. A path into the green. It started to softly rain. And I quickly pitched my tent and slept.
(Somewhere during this evening, when it was already dark, just before I met the cows, I passed a noisy shed with a bunch of boys partying. They stopped me, being curious about what I was doing there in this outfit. I drank a beer with them, tried to answer their questions. Some of them were trying to joke with me, others were more serious. They were dancing and drinking, about to go to some disco nearby. They were young and silly but in a good way and nice to talk to, they kept saying You, they asked why I was walking all alone, what sort of art I made, if it was true that all artists use lots of drugs, if I didn't have anything else to do. They told me about their place, they were really proud of it, the police came by to check them out now and then but they never caused any problems, they just wanted to have some fun, to hang out with friends. They didn't understand I was doing the same thing. But without a fixed location. Without people being there in person all the time.
When I left I promised them I would write about them. And about their place. I asked them for the name of their "clubhouse". They laughed. And smiled proudly. The Wank Shed.)

In February 2014, we will host an exhibition at AirSpace gallery called A Walking Encyclopaedia: it will aim to show the breadth of walking practices, in partnership with the Walking Artist Network. We will put out a call soon for documentation of walks, texts about walks, films about walks, books about walks....I hope to show some of Monique's work there.
Posted by Anna Francis at 12:48 PM