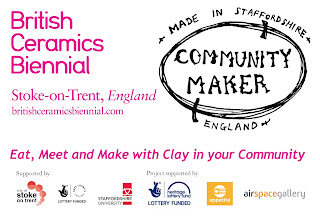 AirSpace Gallery are really excited to once again be a partner in the British Ceramics Biennial, which opens again in September this year. At the last biennial we really pushed the partnership onwards by not only working on an exciting immersive installation commission within the gallery - but also we tested a few other ideas during the festival. We ran the Guerilla Ceramics Trail, which commissioned artists to make artworks for a trail along the Canal which celebrate the city's ceramic heritage - we also started the Spode Rose Project: more details here.
This year we are working with BCB on a new project - which is part of the 'World In One City' project - which explores the rich cultures of Stoke, and global reach of the city's wares via a connection with the plates we eat from all over the world - originating here.
The project we have devised is called 'Community Maker' and takes the 1950's post war, Ridgway Pottery design as a starting point. 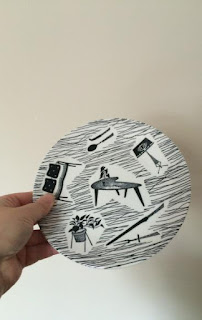 The tableware was designed by Enid Seeney who moved to Stoke around the end of the 1940s to do a foundation course in Burslem. Seeney was the first woman to be trained as a designer at the Spode Copeland Works - before moving on to work and design for Booths and Colclough - part of the Ridgway group, in 1951. It was here that she designed the Homemaker tableware, though it wasn't called that at the time. A single plate went on display at the Blackpool Trade Fair in 1956 - but was thought too radical for the public. This quote from Seeney's obituary tells of how Enid left the industry to become a Homemaker herself - something which in those days for most women meant giving up any thoughts of a career.
'Convinced it could be a success, Seeney and her team made up a prototype coffee set, which sat on her workstation until it was spotted by the buyer for Woolworths, and in May 1957 an order was placed for tea sets, to be sold in five of its London stores. Four months later Seeney left the industry and moved to Devon, to marry her first husband, whom she had met while on holiday, and all communication with the factory ceased.'
http://www.theguardian.com/artanddesign/2011/may/08/enid-seeney-obituary
Enid didn't realise what an amazing success the ware had become until she saw it on sale at Woolworths.
I have always really loved this design - and it feels so relevant to where I am in my life, and my practice - which is really exciting.
Our project is set in the Portland Street Area of Stoke-on-Trent,  which is well known for being the new £1 house community.
This is an area where over the past 10 years - the processes of regeneration had done nothing to revive a once strong and thriving community. The pathfinder scheme which earmarked the area for demolition, and which saw many CPO's served, resulted in many boarded up and abandoned properties, in the interim period before development was set to take place. In the meantime, the bottom fell out of the regeneration market - and the area was left in a sorry state. The council's groundbreaking scheme, to sell off the empty properties for a pound (along with a £30,000 loan which would see the houses brought back to the decent homes standard) has seen 33 new homeowners brought into the area - and my little family are one of them.
The council hope that this will act as a catalyst in kickstarting the regeneration of the area - encouraging absentee landlords to sort out other abandoned properties, and making the area a better place to live.
The Homemaker tableware speaks to me, as one of the new homeowners, about my aspirations for my family and home - but the individual houses are of course part of a bigger picture - and it is only through viewing the houses on the streets as a community that real change will happen. The homemaker design came at a really positive time in English History - the war was over, and people were really beginning to think about a future for their families - and alongside that, industries which had been suspended and turned over to the war effort were all whirring into action, and a new era of consumer culture was beginning.
The design was all about the positivity of this new age, where women could aspire to have modern design in their homes. Our thoughts in relation to this project are around a similar positive aspiration, but this time for the community in the Portland Street Area - and not just the individual houses.
The World In One City project also recognises the value of sharing food together - as a great leveller and a way to help people to relax, so this project proposes a number of creative workshops, where the community have the opportunity to meet, talk, make and eat together, and while doing that, consider 'What will make this place better?' and asking questions like 'What makes a strong community?' and 'What is already here to be celebrated?'
Through the series of claymaking/sharing events we will work together to create imagery which will inform the design of a new series of crockery which we will look to have in production for BCB 2017 - but for the 2015 BCB festival, this will be just about getting started on the idea of regular food based community meetings. This is something that is not alien in the area - as people who have lived here for a long time tell me about the brilliant community activity that used to happen - there have been street parties in the past, and a 'food from around the world' event - and more recently even since we have moved to the area there have been a few events called locally a 'Bring A Plate' where each person brings a plate of something to share - and you end up with a good spread. 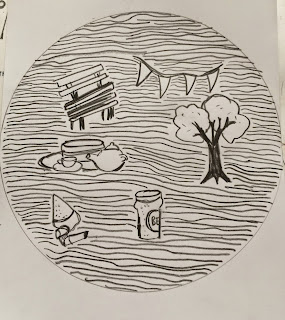 Very rough sketch of idea for new plate
I love the idea that this project will potentially end up with all members of the community having their special 'Community Maker' plate in their cupboards at home, and that that plate comes out for community events. Perhaps by 2017 we will be able to establish a yearly street party - where a giant table is set up in the street and everyone brings their Community Maker plate.
The series of events will map what is here - looking to create a community resource map - but also to think about who's here and what the community wants to do together, while creating space for people to get together and get to know each other.
In other activity around growing food together I will be working with the community to grow herbs and veg - and this produce can be used within the Community Maker events.
In October, the group I work with will be invited to host a meal at the BCB - a celebration event using some of the prototype wares we produce to eat from.
One of the things that is really fascinating for me as an artist is the difference in approach it represents, and the potential for really tracking impact. A lot is being written and discussed recently at conferences and events I have been to, around the lack of any real solid evidence about the impact that art has on people and places - it seems that the main reason for this is that the people making and organising the activity are so busy doing it, and the nature of arts funding means it is often time limited - we are so busy doing it, that we have no time to evaluate the value of it - and in particular - any long term impacts are uncaptured - as many projects happen for a time and then disappear - and the practitioners delivering projects are often only in the places for a time, and then move on. I find as an artist that has worked in various public settings that I am often working somewhere else (not where I live) and that to some extent, that distance is interesting and necessary. We are seeing more and more though, that this approach has its drawbacks - not least that the case for the arts and their impact have not been made. The result of this is a number of projects around dwelling, longer term approaches to public art (as explored in The Art of Dwelling Conference delivered IXIA and IN Certain Places, which I spoke at earlier this month) and the idea of artists living where they work - seem to be springing up: East Street Arts have a new project bringing artists to live in a House for a year, and Vulpes Vulpes are looking into running a housing co-op. Our approach (mine and my partner Andrew Branscombe) is to think about this new area that we live in, where one of the stipulations of being a £1 home owner was that you need to be willing to contribute to the development of the community. This raises questions about what skills we, as artists can bring to where we live, Community Maker is part of that question.
Posted by Anna Francis at 2:42 PM