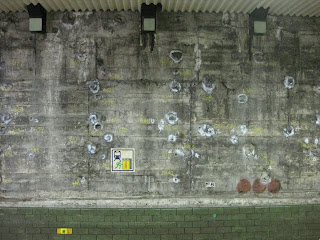 In 2012 I visited Osaka with the view to locate artists, and a curator/collaborator for the second installment of the Indefinable City exhibition. THe trip established a relationship with the wonderful 'Tsukiyo to Syonen' whose director Koh Yoshida has been my co-curator for Indefinable Cities. I selected the 3 UK based artists and Koh selected the 3 Japanese artists. The process of working together has been fascinating, as we discovered the very different contexts that we each work in, and it certainly showed me that some of the ways of working that I ignorantly consider to be quite universal, turn out to be very particular to our culture after all. One main difference which surprised me, was the curator's role within a project of this kind. At AirSpace (and I think other artist led spaces in the UK, the curatorial process is quite a negotiation between the artist and the curator. The negotiation goes beyond the commissioning of artworks - and continues within the installation of the exhibition; so, when the artist arrives with the work, in many cases the placement and exact hanging of the work is discussed with the curator - and in some cases, this can really effect and hopefully develop the work. This, it became clear within installing the show, is not the case in Japan - or at least at Tsukiyo to Syonen - where the relationship is more about the provision of space for artists - and at that point, decisions are handed over to the artist. The show has just finished at AirSpace -and had fantastic feedback - and loads of visitors (many more than is usual at the gallery) and we are really excited that the exhibition is set to travel to 6 cities in Japan in July/August. 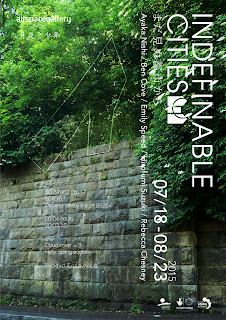 The difference when the show travels to japan is that there will not be one big space (like our UK show) for all 6 artists to be shown together - so the show will be sort of dispersed across 6 cities.
In each of the 6 one of the artists will be shown in the main, but with poster based artworks from the other 5 also shown.
So the 6 places and main artists are:
Ayaka Nishi in Kofu, Yamanishi
DaikiMurakami in Kanazawa, Ishikawa
Ben Cove in Hikone, Shiga
Rebecca Chesney at Atelier Sangatsu in Osaka
Hirofumi Suzuki in Tamano, Okayama
Emily Speed in Onomichi, Hiroshima
Koh Yoshida has provided details of the shows and spaces on his website: here.
I was so happy with how the show looked at AirSpace, the artists really fulfilled what I had hoped to cover within the show, considerations of the body and architecture, a sense of the city as a habitat for humans and other creatures, and exploring the role of the artist in documenting and intervening in the city.
This is tomorrow did a great review of the show here:
http://thisistomorrow.info/articles/indefinable-cities
Posted by Anna Francis at 12:51 PM