I am so pleased that we (AirSpace Gallery) have been commissioned by the New Art Gallery Walsall to take part in the exhibition 'Small Worlds', with the Spode China Rose project.
This project began in 2013 with an idea to intervene within a disused garden space at the Spode Factory - and since then we have: worked with a ceramic flower maker and a rose breeder, redesigned and renovated a slice of the garden and installed newly named rose species, launched the project at The British Ceramics Biennial, held a successful crowdfunding campaign and now showcasing the project in an exhibition.

It was an interesting proposition to present a public realm intervention project of this kind within the context of a contemporary art gallery - and has provided a really valuable point for reflecting on the project ahead of stage two of the project for 2015 - the second renovated slice to be launched during BCB 2015. We decided that the exhibition would reveal to the public the process which we embark upon when making a public realm intervention - usually an action research process.

We also wanted to open out the process - so that people could see how we went about putting this project together - but also - how the learning from it can be applied elsewhere. This lead to the inclusion of one of my works instructions - specially put together for this project.
In addition for the first time we are trying to show one of the roses in the exhibition.
I have shown a live plant before - in the Aftermath Studio Exhibition in 2009 - documentation here. 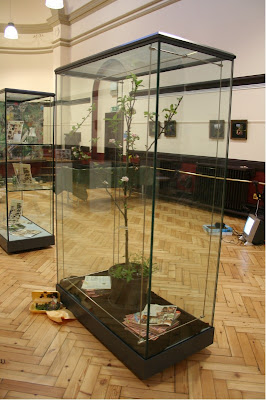 This was an apple tree and only had to stay in the gallery for a week - but the rose bush in Small Worlds has to be alive for 3 months, in addition - due to Walsall having such important artworks in their collection, there are particular rules about what can be brought into the building - the plant has to be completely pest free, and the soil has had to be twice frozen! This has lead to a bit of an unhappy rose bush. The rose is under a lamp - so I do hope it does ok.

In addition to the rose in the gallery, we also have a gabion planter made using unglazed biscuit ware from the Spode Factory (designed and built by Andy) on the roof terrace with 3 of the rose bushes.

The exhibition at Walsall has some fantastic artists in it - and though I didn't make it to the Private View - I am looking forward to getting across to see the show soon.
Here is a text I wrote for the exhibition - which explains the project:

The Spode Rose Project aims to raise questions around the use of neglected spaces in cities – and act as a call for others to reimagine and rethink the overlooked in urban settings.
The project examines the role that artists may have in their environments and has, at its heart, a commitment to action research processes. Through the project, AirSpace Gallery have adopted a process which first seeks to observe and understand the way a neglected city site is operating, or at least to understand what is, or is not happening there – then through an in depth research process which understands the history, geography and stakeholders of a site, aims to form a responsive plan to see the space transformed (even if just temporarily.) Next comes action, where plans are carried out; and importantly once action has been taken, a period of reflection is undertaken, to understand what has happened, and what the resulting new context might be. At this point the cycle begins again.
Our interest as a gallery, and as a group of individuals, is to understand the role that artists and art organisations can have in the places they live and work – but also to advocate for the creative rethinking of public space – to consider public space as something which belongs to, and is, to some extent, governed by the Public. In this way, the public can feel active and activated to make change, where change is needed. Our gallery programme has, in recent years, sought to explore the various ways that artists are responding to their contexts, and the difference that artists and other creative practitioners can make. Through our public realm programming we also seek to set out the differences that we as artists, and our organisation, can make, by being engaged and responsible citizens – and using the skills we have to make positive action where we live.
The Spode Rose Project is one such example.
The project looks to understand the history and possible future usage of an abandoned city garden. Much of the time the garden stands, forgotten and inaccessible, at the edge of The Kingsway,  Stoke-Upon-Trent’s main civic car park, and at the back of the Spode Factory, formerly one of the most significant ceramics factories in Staffordshire.   The garden site is activated every two years, when the British Ceramics Biennial (BCB) takes place in the city; when suddenly the garden becomes the main entrance to the Spode China Hall exhibiting space. Thousands of visitors come through this beautiful, but overgrown green space during the biennial.

As a partner in the BCB we saw the potential of the site, as a space for intervention. A little research told us that this had been a beautiful garden once, much loved by the workers at the Spode Factory (that closed in 2010), and so we embarked on a project to aim to breathe new life into the site – via a design for a garden which would hope to  encourage interest and to suggest a future for  the space.
At the same time as our physical research, into the plants growing in the garden, and our historic research into the garden and factory, the BCB was working on various projects using ceramic flowers. They were working with ceramic flower maker, Rita Floyd, who had been taken on and learned her craft at Aynsley Pottery as a teenager, over twenty years earlier. Whereas  in previous years, hundreds of factory workers were employed to make floral wares, the art of ceramic flower making is now all but lost in Stoke-on-Trent. The idea of the rethinking and repurposing of these creative skills appeals to us, and feels similar to our approach to the space itself. We decided to work with Rita Floyd in designing a beautiful new rose – to celebrate the BCB, the Spode Factory Site, and its rich heritage but in addition to act as an emblem for the rethinking and reimagining of a city’s resources – whether they be spaces, skills or people. Our plan was to take Rita’s rose to a rose breeder – and together to develop a newly named rose – as a fitting motif.
Our research told us the type of rose we wanted to develop would be a beautiful, traditional, full bloomed rose, with a heady fragrance – and that the colour, of course, would reflect the material that Rita was working with, bone china white.
We visited a few rose breeders with a prototype ceramic rose, before a visit in July 2013  to a field full of blooms brought us to Gareth Fryer – whose family has been breeding roses for over 100 years.
We worked with Gareth Fryer to see the naming of our rose, which formed the centre point of our design for the Spode Rose Garden.
The project began in 2013 – we renovated a slice of the garden, as we wanted to show the difference that could be made, and also because we do not have the resources to renovate or maintain the full space – but anyway, that’s not the point. The point is for the intervention to be a catalyst; a demonstration of what could be done, a suggestion, but not necessarily a permanent solution. The slice asks a question – should the full garden be renovated? And if so, who should do it, and after that, who will look after it? So part of the project is about asking those questions.
In 2015 – with the arrival of the newly bred Spode China Rose bushes, we are working to develop another slice, and to gather interest, support and potential stake holders in the garden site, which will launch as part of the BCB 2015. Since 2013, exciting changes have begun offering a new creative use for the Spode Factory,this will include 40  artists’ studios, a world class exhibition and events space, and creative units for small businesses.  Soon the Spode Rose Garden will have a new generation of creative inhabitants as neighbours – and a place within the development plans for the whole Spode Factory site.
Posted by Anna Francis at 9:04 PM