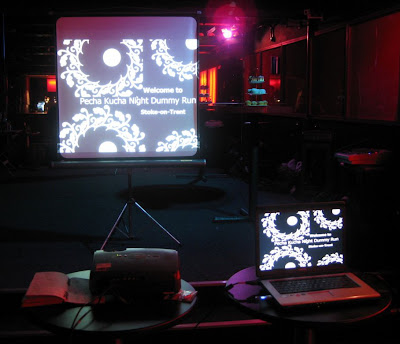 Last night was the dummy run for the midlands first ever Pecha Kucha night hosted by Headtalk and Blurb. Pecha Kucha is a phenomenon started by some architects in Tokyo. They wanted a solution to the way architects tend to go on and on in presentations, squeezing the life out of the subject matter, and Pecha Kucha was the answer. The premise is that the speaker gets 20 slides, and has 20 seconds speaking time per slide, making a 6 minute 40 second presentation in total. 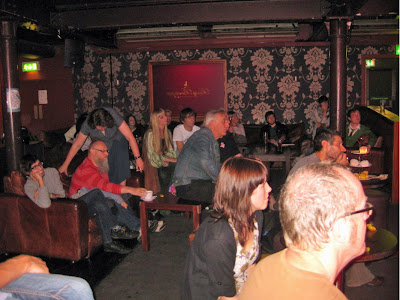 We decided to hold a dummy run to give us a chance to get to grips with the technology and also to start to stir up a bit of interest for the main event, which is set for Friday, November 13th.
Last night we were due to have 8 speakers in total, technical hitches involving PowerPoint discrepancies meant that Chris from Culturing Stuff's presentation could not go ahead in the end, which was a real shame...but we will see Chris's presentation on 13th. 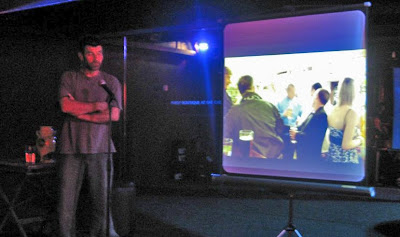 First up was Brian Holdcroft, who set a wonderful tone for the evening with his narrative presentation involving sending off to the Daily Star for a pill which turns you into 'an artist.' It was very funny.

Next up was Tony Jones, who delivered a tour of his love of gloom...which sounds gloomy, but was actually very uplifting, and focused on the idea that atmospheric lighting conditions can produce wonderful results. 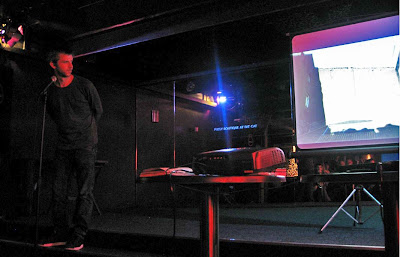 Then Glen Stoker took us around Eastern European, focusing on the wealth of graffiti that can be found there. The presentation looked at the inaninity of tagging, figurative grafitti and messaging - where the 'artist' has been moved to comment in one way or another - the slide which said 'Fuck the New Slayer Video!' raised a laugh. 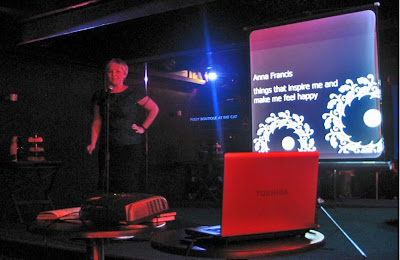 I was next. I had actually planned 3 different presentations, due to the fact that I kept changing my mind what I wanted to focus on, the first presentation I planned was about the day my Grandad died. The second one, which I actually worked quite hard on, was an a to z of the city. I decided over the weekend that I always talk about the city, and must be getting boring now, so changed my mind and planned a presentation which focused on 'Things which inspire me and make me feel happy.' Like cake for example: which I gave out at the end of my presentation. 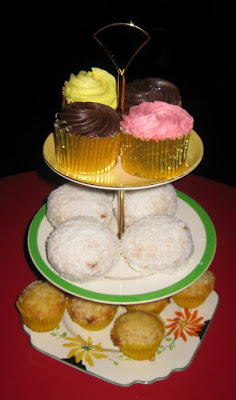 Then we had a beer break, it was at this point that we had hoped to be able to load up Chris' images - but for some reason we had image compatibility problems. 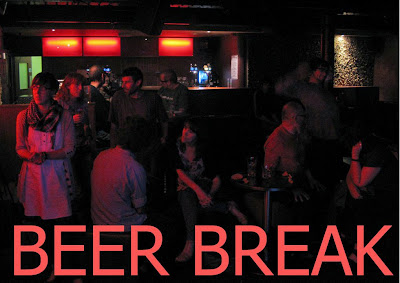 This was precisely the sort of thing that led us to stage a dummy run - so that we could ensure that the 13th goes as well as possible. It was a real shame for Chris who had been up really late getting his presentation together, but a massive learning curve for us. We now know that we need all the media delivered to us, at least the week before in order for us to properly iron out any issues, and also we want Jpegs - rather than PowerPoint presentations, as problems occur when we put presentations together. This was really invaluable for us, and will go a long way to ensure the success of the main event. 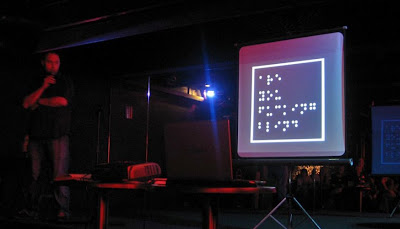 After the break Mark Brereton kicked of with a presentation about one off art works that he has done in the past. My favourite was a text piece which said 'Are You Fucking Blind' in Braille. 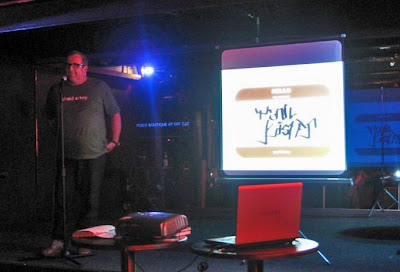 Paul Bishop delivered our second presentation of the evening on Grafitti. This worked really well as a counter point of view from the previous presentation, and looked at the historic origins of tagging, and aimed to set out the artistic merits of grafitti. 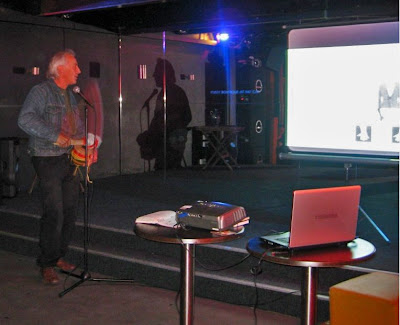 Then our final presentation of the evening saw Bernard Charnley delivering a prose poem, with drummed accompaniment. The poem explored notions of identity, thought, gender and happy accidents. It was fantastic, and everyone cheered. It was a wonderful end to the evening and left us all looking forward to the next Pecha Kucha in November.

A massive thank you to all the presenters, and everyone that came along to watch - and a particular thanks to Mark Brereton for bringing the phenomenon to Stoke.

We will be putting out a call for presenters for the first official Pecha Kucha night in the Midlands, this will mean we can ensure the most interesting and innovative presentations possible...we are really excited to see what the creative people of the Midlands will come up with.
Go to our facebook page for more details, or check us out on the Blurb or HeadTalk pages.

In case you missed it and are interested; here is what I talked about for my presentation:
First I introduced myself and talked about the difficulty of choosing what to do my presentation about, but that eventually I just thought I would do it about things that inspire me and make me feel good. 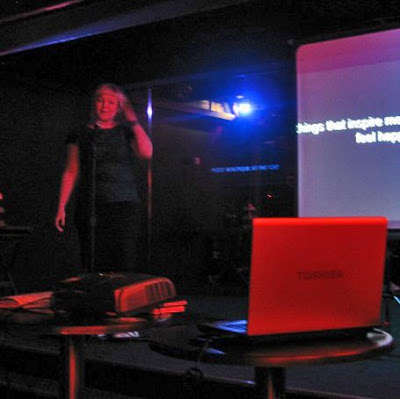 The first of which was the website started by Miranda July called Learning to Love You More. There are 70 assignments on the website that you can do, including 'take a photo of your parents kissing,' or 'reenact a scene from a movie that made someone else cry.' I love the participatory nature of the site, and I have the book too. 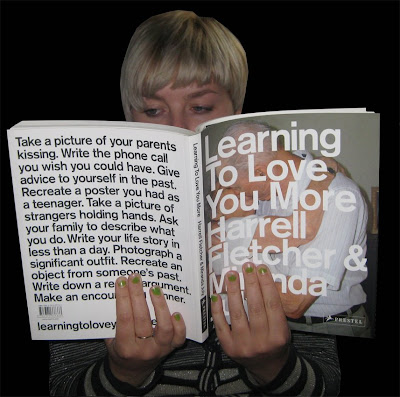 I also like the fact that on their website they have a section on things that they love and that inspire them: one of which is this video. 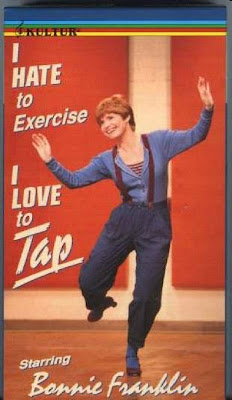 I am often inspired by the books I read. I am reading Nabeel Hamdi's 'Small Change' at the moment, which is all about how ordinary people can do something amazing in their communities, it's about being active rather than passive, doing rather than saying, and getting on with it, rather than moaning about it. 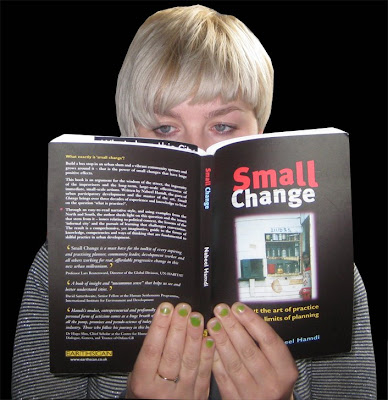 I love talking to other artists about their processes, this is Fred Martin, who I met on a trip to Lille. I like the way he goes all around the world and works with people in their localities, using clay dug from the earth there to talk to them about their lives. 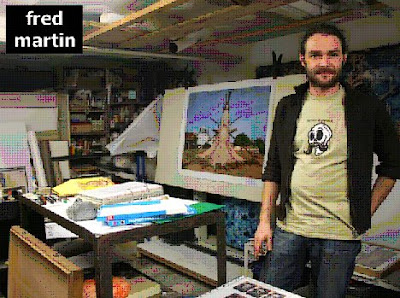 I like it when artists intervene in public spaces, making interesting things happen in a small way, like with the delicate situations project. 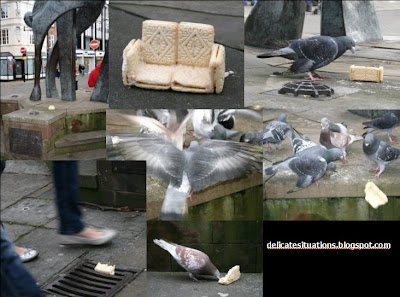 Or artists making a difference in a bigger way, for example the 2006 Berlin Biennial, which saw artists inhabiting all sorts of spaces on August Straβe, in Mitte. Spaces like this beautiful ballroom. Artist Tino Sehgal had set up a performance piece on the floor of the ballroom - two lovers entwined in an endless embrace. It was so beautiful. Tino Sehgal does not allow his work to be documented, preferring it to live on in the minds of the people that see it, or talk about. Legendary. 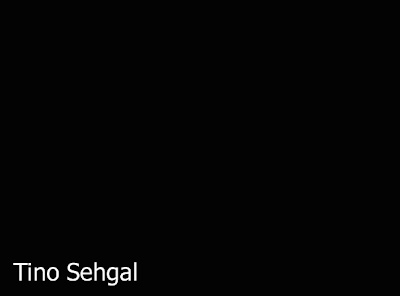 Artists taking over disused spaces against all the odds and bringing them to life really inspire me. The Fishmarket in Northampton is a particularly good example of this, it's wonderful. 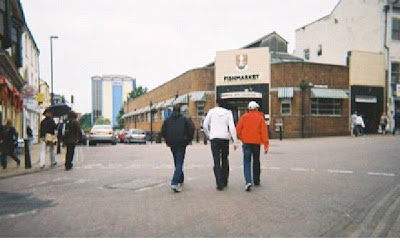 Skateboarders -because they create their own urban landscape and are not constrained by urban planners. They could be seen as frustrated surfers where there is no sea, but they truly make sense of the old saying; beneath the pavement - the beach. This is my friend Matt, when he was little. 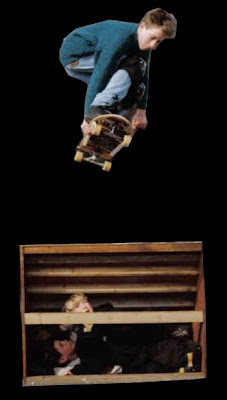 I love the way the Emo kids are using the site of the ABC cinema as a space to hang out, they've turned it into their very own place to be, and I love the fact that teenagers today are using this site which was traditionally frequented by teenagers through time, who used to visit the cinema. I find the Emo kids unpredictable, and I like that. 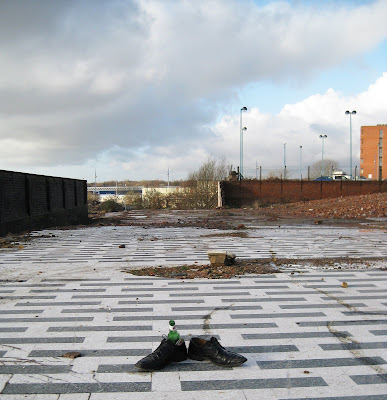 The way the plants take over sites of dereliction around the city so quickly is amazing. Sites which could be ugly, very quickly become havens for wildlife. 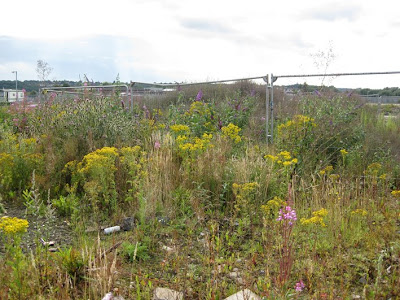 This is helped along by people like the guy my mum told me about - a recovering alcoholic, who also suffers with mental health issues, he has started to take control of his life and his surroundings by noticing areas of the city that look dreary or sad and throwing a waterbomb full of seeds at the site - soon the plants and flowers grow up where there was dereliction and depression. 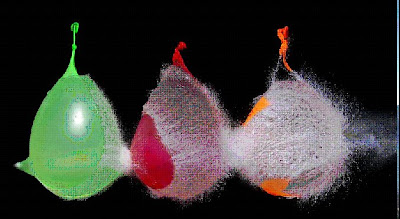 I like food for free - picking field mushrooms or bilberries. There is something so satisfying about a self-picked breakfast. 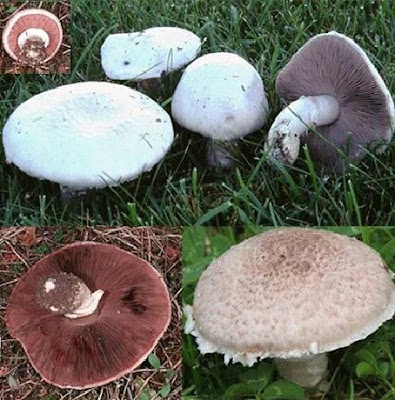 The Cat Cafe that Wendy told me about in Vienna. This woman loves her cat so much she dedicated the entire cafe to her, tht cats name is Mini mini, and is allowed free reign of the place. There are cat hairs everywhere, ornaments and pictures of cats. That is real love.

I love 'Love' familial love, love of friends, boyfriends and girlfriends, pets - all sorts of love. Other artists being inspired by love and making work about it. The word LOVE. Am I sounding like a hippy? 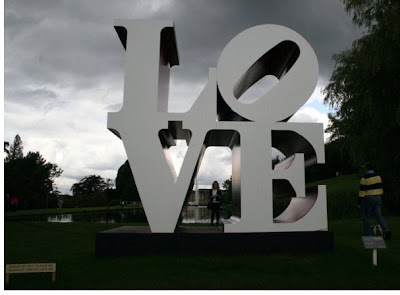 I like old ladies buttons. This is part of a collection that I bought on ebay - an old lady died and her daughter sold the entire contents of her sewing box. You could tell alot about a person by what they have intheir sewing box - this speaks of a different time, the make do and mend generation.

I love folk singers, and in particular this one: Beirut. I love the video he did for the song Nantes. The Youtube video explains exactly what is wonderful about him. 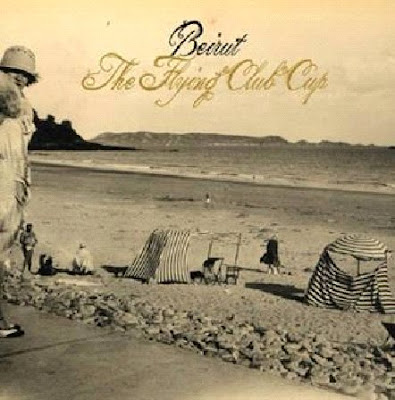 I enjoy my collection of Shelley tea plates, somehow my toast and jam tastes so much better when eaten off one of these. I like 1920's crockery...in fact anything from that time. 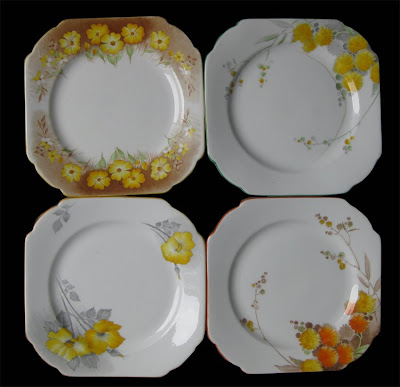 And finally I love love love cake. All sorts of cake, chocolate cake, lemon cake, strawberry shortcake. All types of cake for all sorts of moods. And I finished with a question: If you were a cake, what sort of cake would you be? 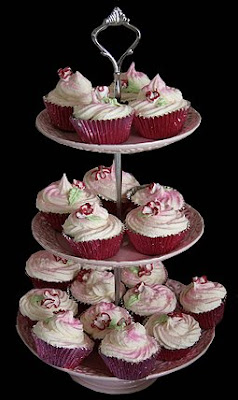