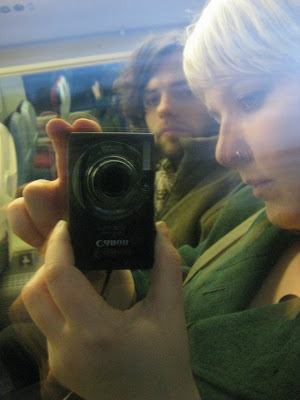 Dave and I went on a daytrip to Liverpool, to meet Lynda Morris - curator of the Picasso exhibition at Tate Liverpool and EAST international.
We were going there to speak to Lynda about EAST, and in particular the Norwich School of Arts involvement in it. This was a research trip as part of the R and D programme we have been working on for Conjunction 2010.

Conjunction is Stoke-on-Trent's contemporary art biennial, and is officially in it's second phase (though has actually been around for much longer really.) I was asked to join the Steering Group a few months ago, and through team development activities it has been identified that my role will be to consider engaging communities in the broadest sense, looking at a Live Art element for the biennial, and also ensuring full and proper evaluation is built in to the project. I am really excited to be on board. 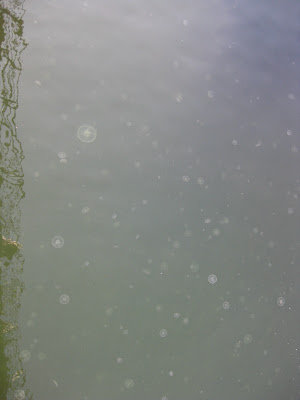 While in Liverpool we had a look at the Global Studio show at the Bluecoat, and managed to see Rineke Dijkstra's 'I see a Woman Crying' at Tate (which I was really pleased about, as I really wanted to see this - the piece represents a brilliant way of engaging young people in the arts.) We also saw the most frightening amount of jellyfish I have ever seen in one place - in the Albert Docks.

Lynda was really interesting, and had a lot to tell us.
Lynda talked us through the early days of EAST and how they started small, and built each year on the last.
The links to the University were really important. They realised that there was a fantastic resource (great studio/exhibition space) that was not being used for a big chunk of time in the summer, and that EAST could benefit from that.
In year One they had £3,000 funding from the paper, and then asked that each artist who applied paid £10 - this really helped to fund the programme. This is certainly interesting, but is a difficult one for me. As a practising artist I rarely pay to enter a proposal for anything - and so this £10 would have certainly made me think about whether to apply or not - but I do think that it is a good way to generate some funds, and perhaps only the most serious artists would apply?
In year one none of the artists were paid, but each artist was offered a token £10 (which I guess is a good way of dealing with the thought of charging an entry fee).
Students from the University became technicians, which would have been a really good opportunity for them, and is something that happened in Conjunction 08 - although we did find it quite difficult to recruit.
Lynda stated that the emphasis of EAST was on 'bringing the people together - that it is the thinking of the artists that you are interested in, and you are making that available4 to the people around you.' I like this idea, as for me, the way that artists think through work is infinitely interesting.
It was also important that the economics and structure of the organisation be 'unconcealed' which I am also all for! 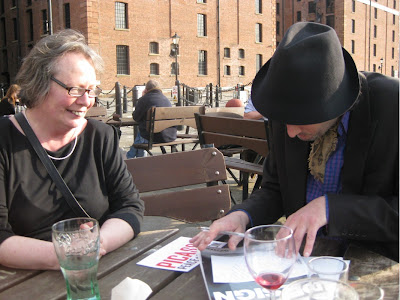 Lynda had so much useful advice, and we really enjoyed meeting her. While we were talking we were approached by 'The People's Poet of Liverpool' who offered to write Lynda a poem.She asked for a poem about Picasso, which he obliged with. 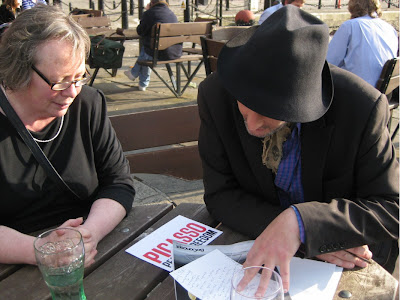 The title of the poem was 'Peace and Freedom' - which he write on the spot, and then recited for the grand sum of £5 - a bargain.We were really grateful to Lynda for taking the time to meet us, especially as it was the week that the show opened. 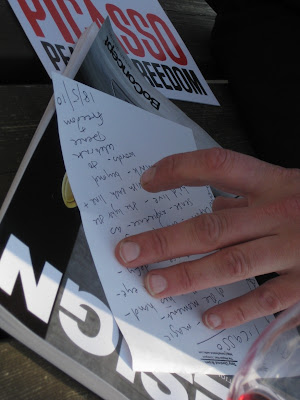 When we went to get our train, we were told that there would be no train this evening to Stoke-on-Trent - due to vandalism, Sorry! and that was that, no offer of help to get home, and when I phoned the train company they said - give us a ring in the morning. It seemed that the train companies no longer take any repsonsibility for actually getting their passengers to their destinations. BRING BACK BRITISH RAIL!
We managed to get to Crewe, where Katie rescued us! We had such a good day.
Posted by Anna Francis at 5:07 PM