So, Saturday saw the launch of the Pest publications from 3 locations: in Stoke, Preston and Toronto, although unfortunately technical difficulties meant the Stokies never got to speak to the Canadians...but anyway, the night went off with a bang. First to arrive at the House Gallery, Stoke-on-Trent was Andrew Branscombe (One of the directors of AirSpace Gallery)
Each artist/house guest in both Preston and stoke was instructed to bring a bottle and an artwork with them for the window gallery, the invitation stipulated that the art work must be no bigger than A6 size if 2d, and no bigger than 3cm cubed if 3d. The art work would be weighed by the curator, and then a receipt given to the artist for their piece stating the title, artist's name and weight of art work. The artworks were then displayed during the evening on the Window (sill) Gallery, before being packaged up in order to go on tour to Preston's Window Gallery - we await the Preston package with interest. 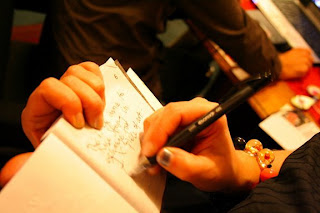 Andrew's piece could be described as an intervention, and involved a miniature puddle being installed on the window sill; he had also brought a tiny label with him, which showed the title of his piece Unpopular Liason [sic] Causes Ultra Cool Artist to drop in Stature. Andrew also delivered a piece made by his AirSpace partner David Bethell, who couldn't make it to the opening. David's piece was two 2d pieces entitled The Ore in More.
On entry to the house gallery each person was given a copy of the publication, and a gift pack containing postcards, stickers and magnets made by House Gallery curator, Anna Francis as well as a mini Sharpie pen. The pen was included because each pack also contained instructions for a mini individual art project, which the visitor would carry out during the evening.

The Curator giving a tour of the Fridge Gallery.
During the day we had turned a few corners of the house into art spaces; for example there was the Fridge Gallery, the Sculpture garden and some other light shows to arrange. 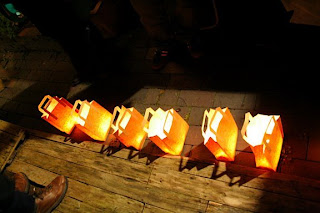 Once a few people had arrived we set up the 'live link-up' with Preston. 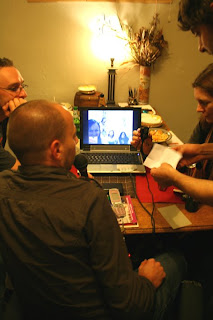 Each of the artists showed the piece of work that they had brought for the window gallery, and gave a rationale of it's creation, and also showed and explained the individual project which they were carrying out via the webcam to the Preston crowd, and then the Preston artists gave us a tour of their House Gallery exhibition. 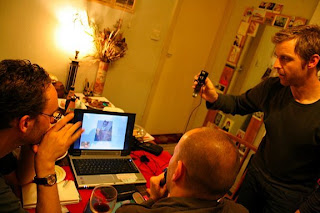 There was an interesting difference in approaches; the Preston House Gallery was in a large and beautiful Victorian House, and the living room had been cleared out in order to create a white cube; whereas in Stoke, where space was at more of a premium, the emphasis was on working with the existing domestic space and creating interventions. 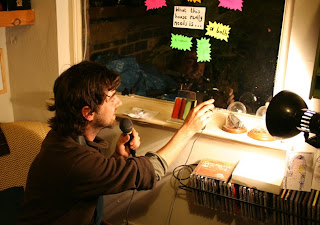 Rebecca and Elaine (Preston)sporting 'Curator's glasses' from the Pest publication poster talking to Tony (Stoke).
As the evening progressed, and as more of the wine was consumed, lots of fun and laughter went on at both ends of the internet link. Eventually the evening was rounded off with dancing and impromptu cross-city karaoke. 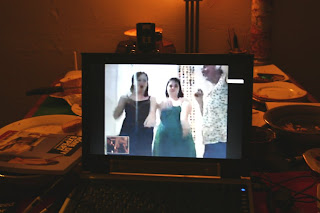 Already one of the Stoke attendees has approached 'The Curator' to talk about another House Gallery to be hosted in their house in the near future. DIY House Gallery! If anyone wants a copy of the PEST publication which we were all celebrating the launch of CLICK HERE, and get your hands on the DIY manual inside in order to get some ideas for starting your own house gallery.
Thanks to Glen Stoker and Andrew Branscombe for the documentary photography of the event.
Posted by Anna Francis at 11:42 PM