WLTM Event and end of residency.

So, just though I would update here on what happened at the WLTM event; even though there is a dedicated blog for the project...it might go some way to explain why this blog has been slightly neglected ovetr the last few weeks. The residency at Harrington Mill Studios has now come to an end though, so I should be getting on with more projects in the City.
Saturday morning we worked on the finishing touches to the WLTM exhibition - there were only a few things to do, the main one being that selected artist Elena Cassidy-Smith came in to repair a little bit of damage that had occurred to her piece in the post. I was happy with the layout of the show, and I was really pleased with how the posters looked with the works of art. I see the posters as elaborate labelling devices - giving a clue as to each individual artist's identity - and developed from their questionnaires.

At around 2 The Director's team of trusty helpers arrived to help set up the event's refreshments, P.A. system and data equipment.

Then all that remained was for me to make the transformation from Anna Francis to The Director. This involved the donning of a coral power jacket with shoulder pads and gold buttons, gold shoes with kitten heels, a clip-on ponytail and of course the Director's famous nail varnish, in flamboyant coral. 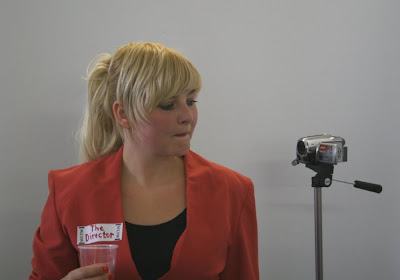 Then there was just enough time for some dutch courage before the artist's and viewers began to arrive. 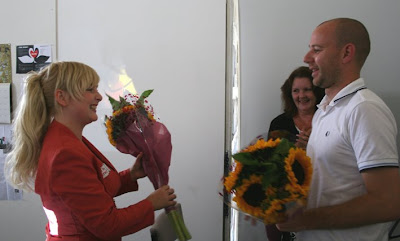 Artist Wayne Thexton surprised the Director with a bouquet of flowers. 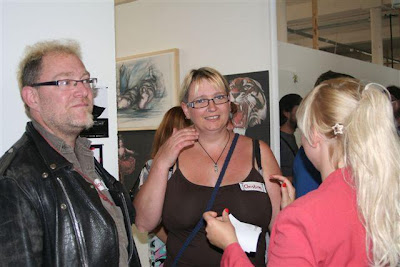 The Director met each artist as they arrived and explained what would be happening and gave each a name badge so that they could recognise each other. Above: The Director greets Andrew Martyn Sugars and Christine Gray. 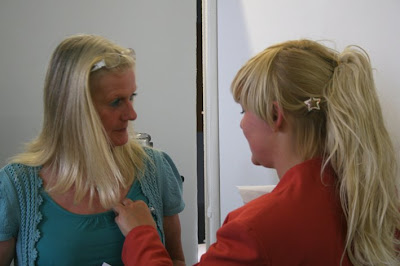 Above: the Director greets Steffie Richards.

Above the Director meets Alex Staiger and gives her a name badge. 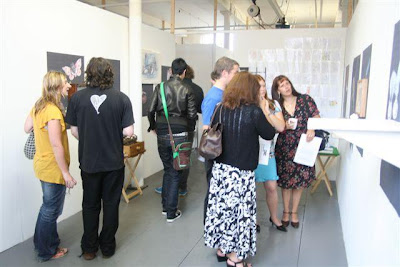 Above and Below: The viewer's have time to have a look at the show before the introductions get underway.

Then the WLTM main event got underway - the Introductions. 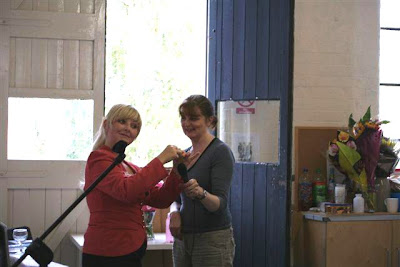 Above: The Director played a wind-up music box into the microphone to announce the opening of the event, the tune - Edith Piaf's La Vie En Rose.

Then the Director explained the WLTM selection process; and showed the pile of over 600 artist comparison forms. 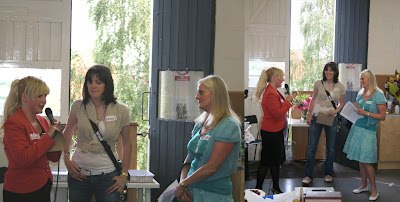 Then the Introductions began: The first of WLTM's perfect pairs were artists Lindsey Cotterill and Steffie Richards. Each artist had prepared a 'Burning Question' which they put to their perfect partner during the Introduction: I will put all of the burning questions and answers up later. Above: Lindsey and Steffie meet for the first time.Lindsey and Steffie's favourite colour is blue, they are both non-smokers who eat healthily and at a party both of them would describe themselves as an average mingler. Below: Steffie Richards 'Sculpture: Shy' and Lindsey Cotterill's 'Nightlines' are exhibited together. 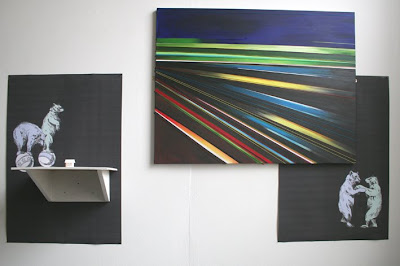 Steffie’s poster relates to her use of the word ‘bear’ in her description of herself on the questionnaire, and the colour of the bears relates to her and her match’s favourite colours. Lindsey’s poster relates to the fact that on her questionnaire she mentioned that her perfect date would involve an evening of Latin American & Ballroom dancing (preferably with lessons first), and also as above the colours of the bears depicted relate to her and her match’s favourite colours. 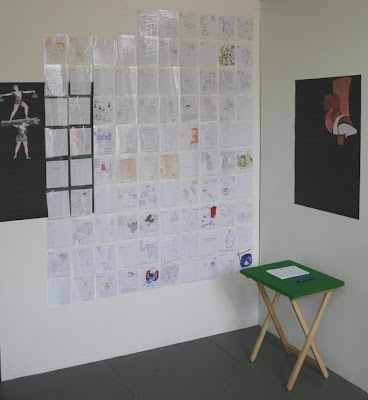 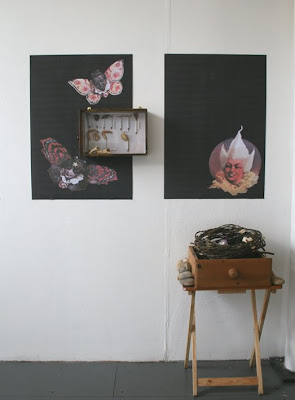 Elena’s poster relates to the fact that when asked what would best describe her character at a party, she said she could best be described as a social butterfly.

Christine’s poster relates to her interest in nature and the way that she seems to enjoy creating alternate spaces for magic to happen, out of the detritus of the everyday. 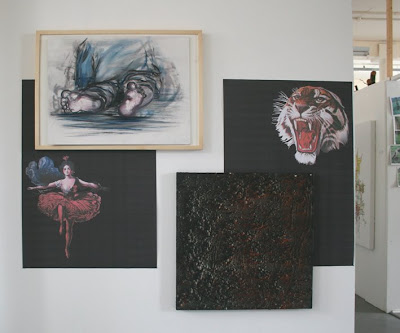 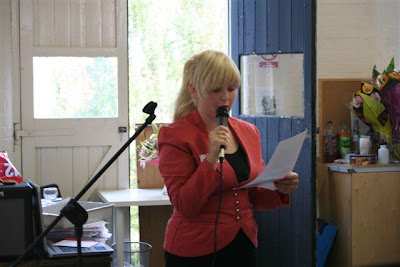 Next it was time to introduce couple number 5 - Sarah Turner and Yvette Hawkins. Unfortunately neither one of this pair could make it to the event; so they conducted a long distance relationship. They wrote to each other - with a Burning question, and then replied to each others question. The Director read the results out to the audience.

If you could choose only one memory to take with you into the afterlife, which memory would you choose?

ANSWER: The second time I went to Bexhill on Sea to see my boyfriend, it took me 9 hours to get there. We sat chatting for hours. It was beautiful. That’s when I knew I loved him.

Below: Yvette Hawkins' 'I Opened My Mouth and You Fell Out' and Sarah Turner's 'Beds'.' 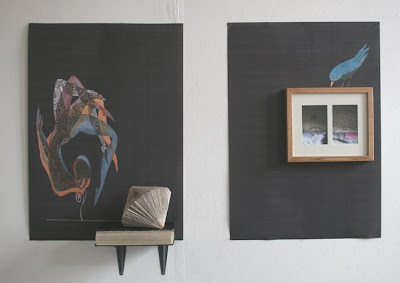 Yvette’s poster relates to the fact that she is a smoker, and that in general her approach to life involves looking at the world in a new and enlightened way; turning it on it’s head.

Sarah’s poster relates to the fact that she described herself as shy, and also said that if she were an animal she would be a bird.

The last of WLTM's perfect pairs to be intyroduced was Wayne Thexton and Alex Staiger. Wayne had brought a bunch of sunflowers for Alex, which was certainly a smooth touch. Alex and Wayne are the same age and both are non-smokers. When asked if you were an animal what animal would you be they both said a deer. Below: Wayne Thexton's 'Perch' and Alex Staiger's 'Chance Me.' 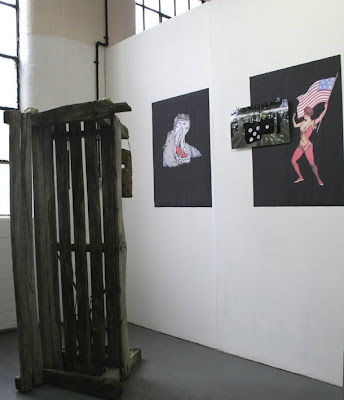 Then the Director thanked all of the 34 artists that applied to the WLTM dating agency, and in particular of course the 6 perfect pairs, and the audience for coming to see the show; and then said goodbye. Then the artists and viewers were left to their own devices; to go and have a look at the show, mingle and talk to their matches. Below: Christine and Elena looking at their paired-up work. 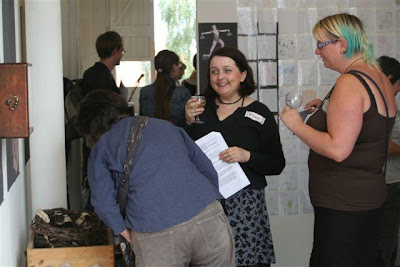 Below: Michelle Greenwood having a chat with Steffie Richards. 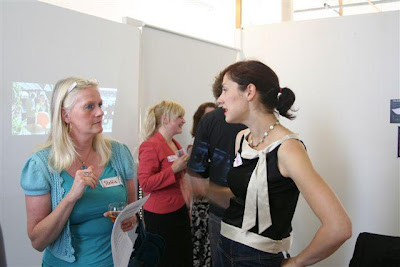 Below: The End of the Director; her ponytail, jacket and shoes discarded by her desk, and the waste paper bin, full of her cotton wool balls which she used to take off her nail varnish each day, in order to apply a fresh coat. 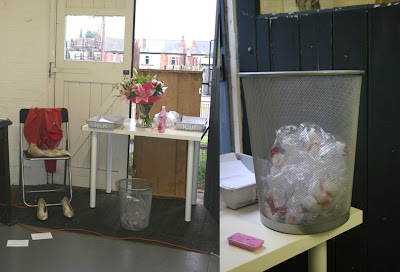 I (Anna Francis) would like to take this opportunity to thank all of the 34 artists that applied to the WLTM dating agency and of course especially the 12 that were selected, for being part of the exhibition and taking part in the event. I would also like to thank everyone at HMS for being so welcoming, and Jackie Berridge in particular for the opportunity, and the amazing support, advice and help throughout my residency. Thanks to Phil Rawle for the design of the posters and flyers, thanks to AirSpace for the technical help and loan of equipment for the event; thanks to Staffordshire University for the funding help and a special thank you to Glen and Dee for their wonderful photographic skills, which made the above post possible. I love you all. xxx
Posted by Anna Francis at 11:04 PM

Anna (and the Director), it was a good process and event to be a part of. Wishing you well for whatever comes next.

Glen, the SheltonDreamTeams thing looks amazing. My own 'Image Wrongs XI' have had a woeful start to the season (9th of 14).